Let me preface this by saying that I, like everyone else, have an enormous amount of respect and affection for Keanu Reeves. By all accounts he is just a very lovely man, and to different people he is Ted "Theodore" Logan, he is Neo the chosen one, latterly, he is dog-loving murdermachine John Wick. He has put in fabulous turns in some truly iconic productions.

It's just that, with the best will in the world, his performance as Johnny Silverhand in Cyberpunk 2077 isn't one of them, is it?

Keanu Reeves, he of the memes, was revealed (in terms of his connection to the game, not, like, as a person) at the same time as Cyberpunk's initial release date, back at E3 2019. He appeared on stage, seemed surprised that everyone was losing their minds at him and/or some rinky-dink game-a-majig, and someone in the crowd yelled "You're breathtaking!" at him. And Keanu yelled it right back, a now-famous moment that is immortalised in the most fitting way: as a pose in Cyberpunk's photo mode.

Keanu's involvement was just another ratchet in the quivering, breaking-breaking point excitement that a bunch of people already had for Cyberpunk. But, as Graham noted in an aside in his review, Keanu's performance in the game is probably the weakest of the cast.

A screaming rockstar terrorist? Howling rage? Who are you picturing? No, it is not the stoic grace of Keanu Reeves.

This isn't Keanu's fault. He plays Johnny Silverhand, erstwhile rock band front man who planted a nuclear bomb in a corporation's headquarters - but got caught, and turned into a data ghost now living in the Cyberpunk 2077 protagonist's head. Johnny Silverhand is, from what I can gather from the context in the game, an overconfident asshole, a loud revolutionary, a screaming rockstar terrorist full of howling rage. In other words: the opposite of the things that Keanu Reeves is good at portraying. Keanu is alright in the moments when Johnny is being quiet and introspective, but these are few and far between. CD Projekt gave him a role that really doesn't play to his strengths.

Add to this that voice acting in a game, even one with mocap, is a very different thing to acting in a movie or a TV show, and you end up with a pretty flat performance. Keanu is right for many things, but for this he's like my dad trying to discuss why Brexit is still definitely going to be great: self-evidently wrong.

This is a shame because there already exists an actor who is perfect for the role of Johnny Silverhand. A screaming rockstar terrorist? Howling rage? Who are you picturing? No, it is not the stoic grace of Keanu Reeves. It is a flailing disasterpiece. The OG meme-man. 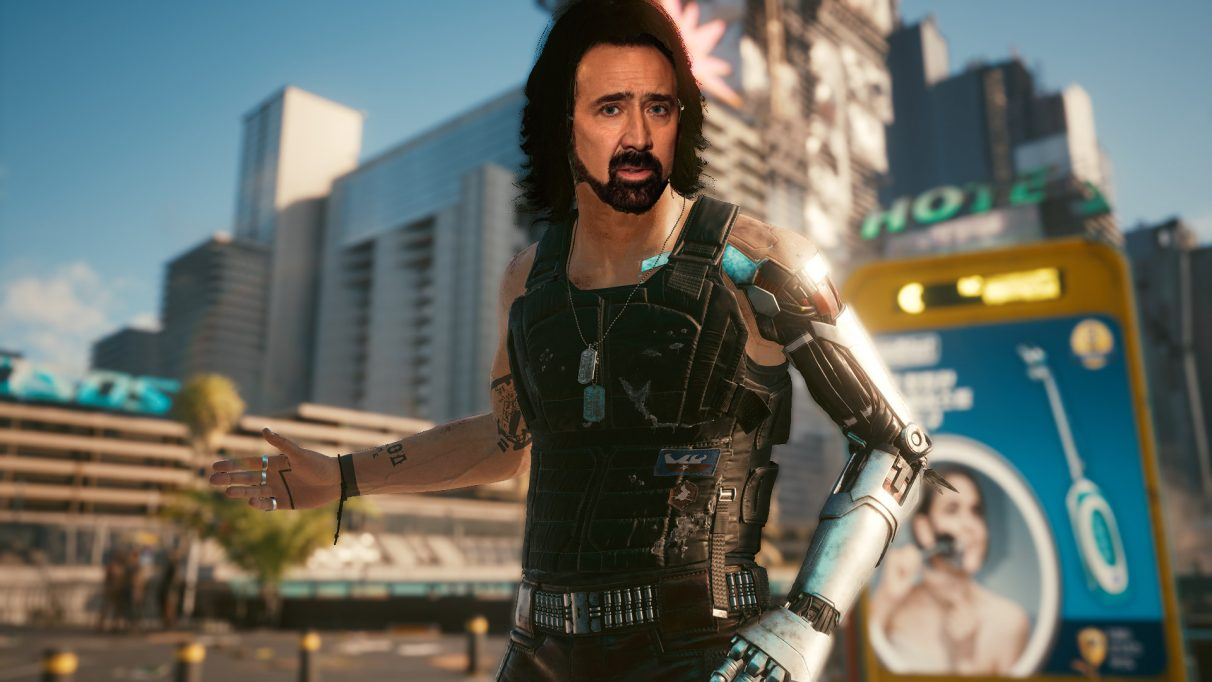 Look at it and tell me it instantly doesn't make many thousands of percentiles more sense. Nicolas Cage would be literally perfect for this. There is no role he has been in where he hasn't given it his all and subsisted entirely on a diet of the scenery. This wouldn't even be the first time Nic Cage has played a ghost driven by vengeance!

The only difference would have been that a) Cage is probably a bit less expensive by the hour than Keanu and b) Cage doesn't have a line of motorbikes you'd end up having to put in your game. So like, wins all around for CD Projekt?

The only explanation I can think of is that they asked Cage and he was already busy, fuckin, carving intricate models of fast food out of bone or whatever it is Nic Cage does with Nic Cage's time. Because if they didn't ask Cage then every single person involved in the decision making process around Johnny Silverhand is a fool of the highest order. He was right there.

He was right there.