Some say that key to a hunter's success in Monster Hunter: World is what's in their stomach. The truth is that there are a lot of different factors to succeeding in your hunt, but the one that's most easy to forget is to eat before heading off. You could just go for any old dish and be done with it, but there are better choices to be had the more time you invest in learning about good cuisine. This guide will take you through how vital ingredients are to getting the best meal to eat before a hunt.

Eating is one task that should be in your list of of tasks to do before venturing out on a hunt, as described in the Monster Hunter World guide. There are multiple places that have a canteen - namely the third and fourth floors of Astera. There's also a mini-canteen in each camp, so if you somehow forget to eat before starting your hunt, you can eat at every camp, though there will be some missions where the game throws you in the thick of it, so try to ensure you eat before you fly.

What is the best meal at the Canteen in Monster Hunter: World?

Of course it's a lot better to have your meal at the canteen, but with such a huge selection, it can be daunting to work out what the best option is for your pre-hunt meal. The truthful answer is that there is no one best meal as certain meals give good buffs, but some pre-made meals are better when starting out. During the beginning, the Chef's choice platter is a good option in that it gives you some skills and buffs for you and your Palico, however he tends to use all fresh ingredients, meaning you may not get exactly what you want in terms of skills.

There are much better options available for you once you're further into the game and have a few more ingredients to use after doing quests for the chef. Custom platters soon become your best friend. How this works is that by putting two of the same type of food into a meal, you'll get a buff to your stats depending on the type of food selected, for example, if you stick in a Wyvern Thigh and Wyvern Skirt Steak, you'll get a small attack boost. Each different type of ingredient is collected during side quests. Using fresh ingredients will also boost your overall health.

Twice during the course of the campaign, you can upgrade the Canteen to provide a larger amount of food that the canteen can prepare at any given point. Each one will add two slots to any meal that can be prepared, up to a maximum of six. 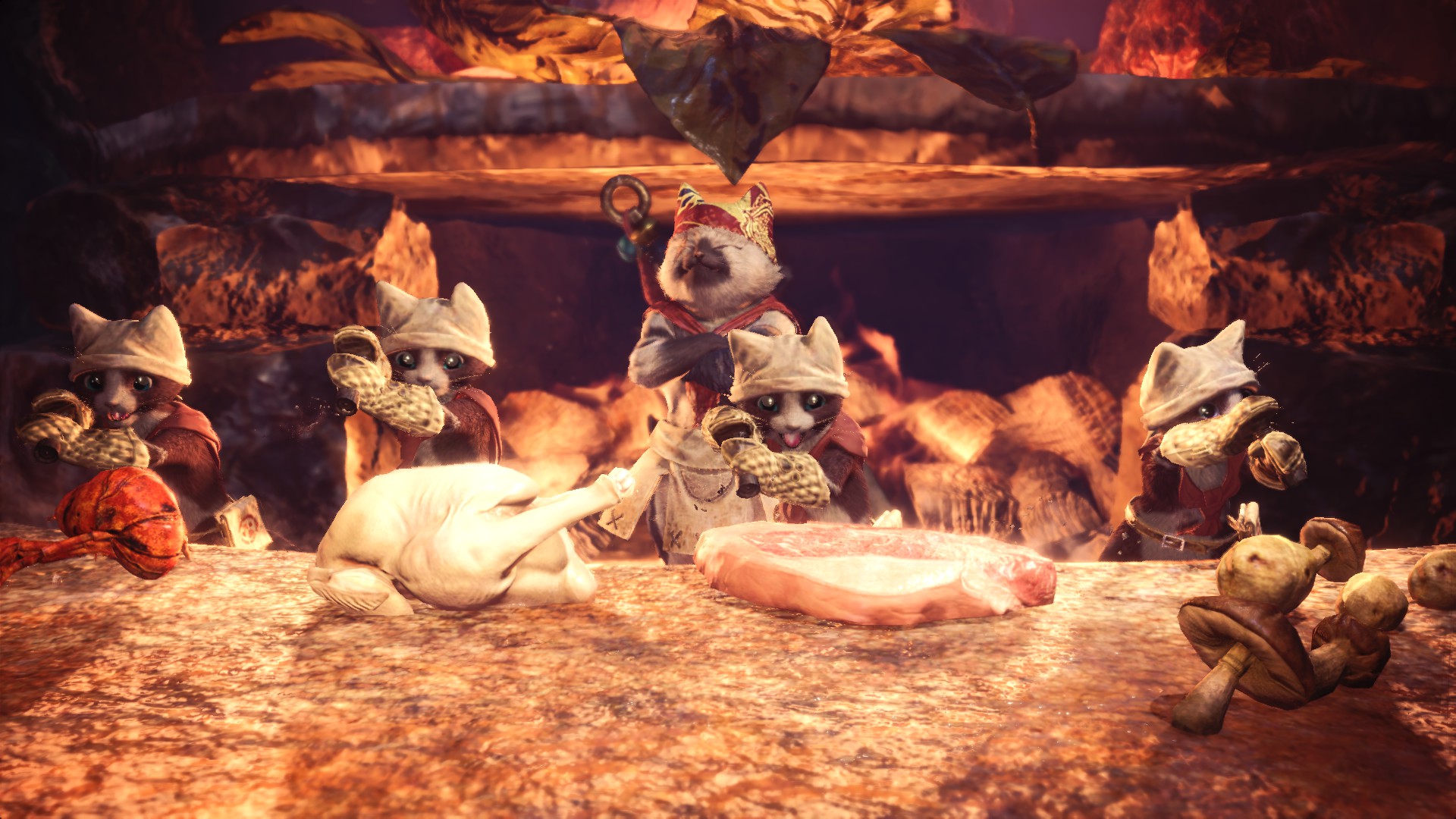 What skills do ingredients give for meals in Monster Hunter: World?

Meat increases attack and fish increases defence, while vegetables give elemental resistances. Drinks increase the chance to get certain skills depending on your beverage of choice, but are able to be seen before putting them into your order. The freshness of your ingredients is also a key factor. Not only does it provide a small health boost, it also gives a higher chance of activating a particular food skill. The following table lists all the possible skills that you can get from food, which you can use the search functionality to filter down to the specific item of choice.

At the beginning of each quest, the daily skills will change. These are overridden by the ingredient activated skills as shown above, but below are all the possible skills that you can obtain when having a cooked meal. 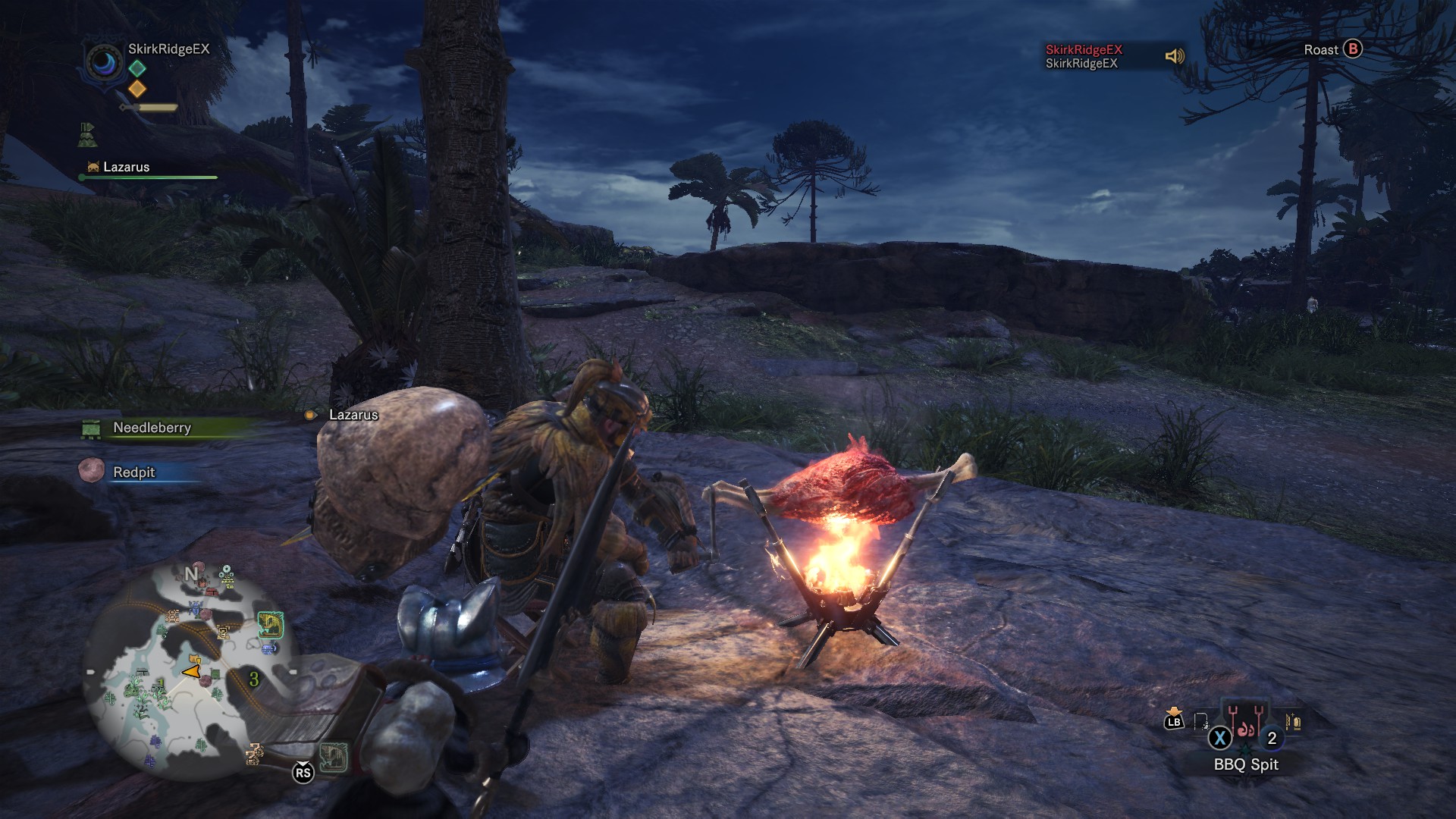 How to use the BBQ in Monster Hunter: World

There may be times when you need a quick pick-me-up in the middle of a hunt, namely when a monster has made you faint, and you're nowhere near your camp to visit the canteen. Rations from the chest when you start out help, but the meals you get while using the BBQ spit are much more succulent and provide a bigger bonus.

In order to use it, you'll need some Raw Meat. This can be found on some of the fauna around each of the maps. Once you have the ingredients you need, activate the BBQ spit to set up your little cooking station. A little tune will play as you're cooking and you must time removing the meat from the fire with the end of the track. Not long enough and you'll produce Rare Steak, which is good, but not the best. Too long and you'll burn it, but cook it just right for Well-cooked Steak.

The benefit to doing this in advance is that your maximum possible stamina will go down as your hunt goes on, meaning you won't be able to run after your quarry for long. Eating rations can be good in a pinch, but your own BBQ'd hunks of meat give a much better boost to your overall stamina.