Bringing your strongest weapons and armour and just wailing wildly at the large beasts of Monster Hunter: World isn't always the best option. Some weapons are more effective against your chosen quarry than others, while knowing where exactly to hit them can reap new rewards and even leave the monster to further attacks. This is where ecological research comes into play and while it may be somewhat difficult to grasp at first what the point is, this guide will walk you through how to find out a monster's weakness and how to earn research points quickly.

With the huge number of monsters in Monster Hunter: World, it can be daunting to work out what weapons and armour should be used against them, as well as what loot they can give and how best to obtain it. Of course, preparation for each hunt or expedition is key, so have a look at our Monster Hunter World guide for details on how best to prepare and what you should always remember before venturing into the wild. 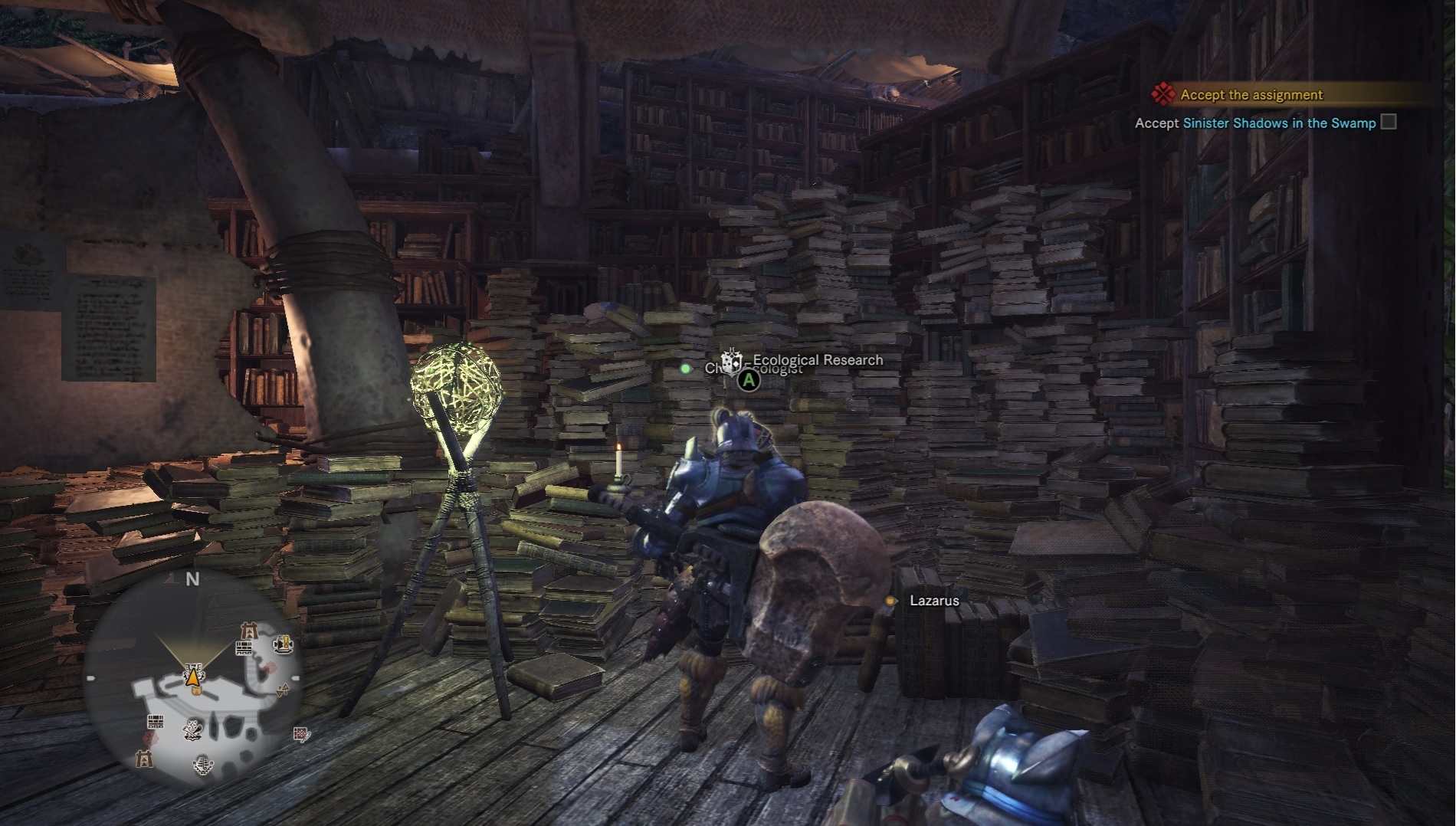 Where is the Ecological Research Centre in Monster Hunter: World?

The first challenge is working out where in Astera the Ecological Research Centre is, after all it isn't highlighted on your hub map to begin with. You won't be able to access it immediately, as you'll need to have successfully hunted the Great Jagras which you can find out more in our Monster Hunter: World Great Jagras guide.

When you visit Astera and are at the entrance, have a look over to the left. You'll see in the distance a small staircase that leads to a big pile of books. Sitting on said books is the Chief Ecologist, who you'll need to speak to in order to activate the research centre for use. 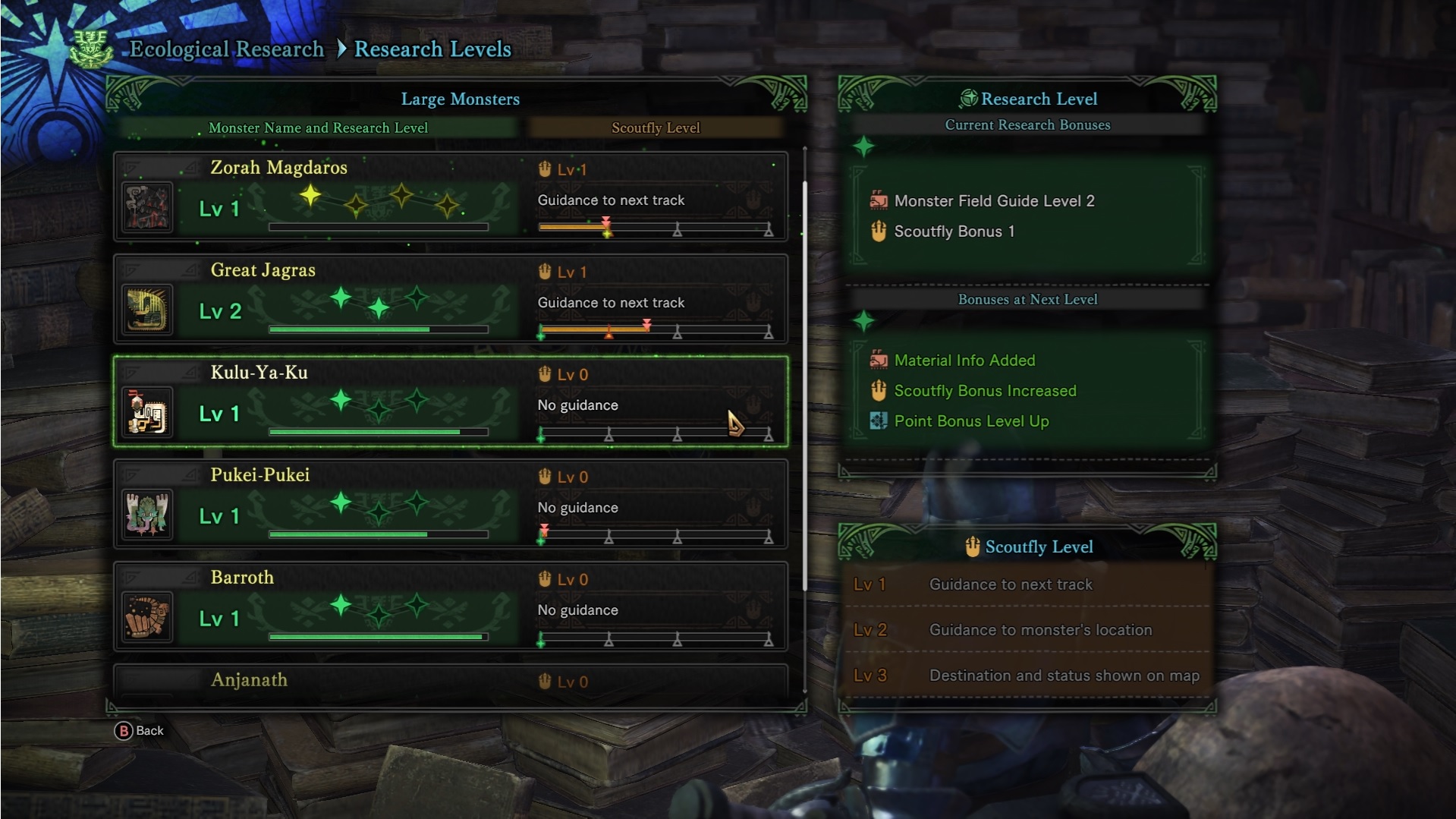 How to use the Ecological Research Centre

When you first dive in, you'll see a few options. Research levels brings up a list of every single monster that you have encountered, whether they are the big titans that you must bring down in a hunt, or the runts that populate the area and act as either prey for monsters or a distraction for you.

The level for the monster is based on the time spent tracking the monster, as well as fighting them. Scout flies are your best friend for tracking creatures, so you'll also see a separate level for how well they can track a monster. The higher the level, the better your Scout Flies can pick out where a monster is. Once you get to scout level three, you'll be able to see on the map not only where the monster is, but where it is headed, allowing you to intercept. One thing to note is that if you haven't hunted a particular monster in a while, this does go down, so you'll need to hunt that monster repeatedly to maintain the level of guidance Scout Flies can give for that monster.

During the rewards screen, you may get a notification that you have levelled up a particular field of research into a specific monster. This will tell you to go to the research centre, which is highly advisable to do so as soon as you get back to Astera, in order to see what new bonuses you get for your Scout Flies and to see new details on that monster. 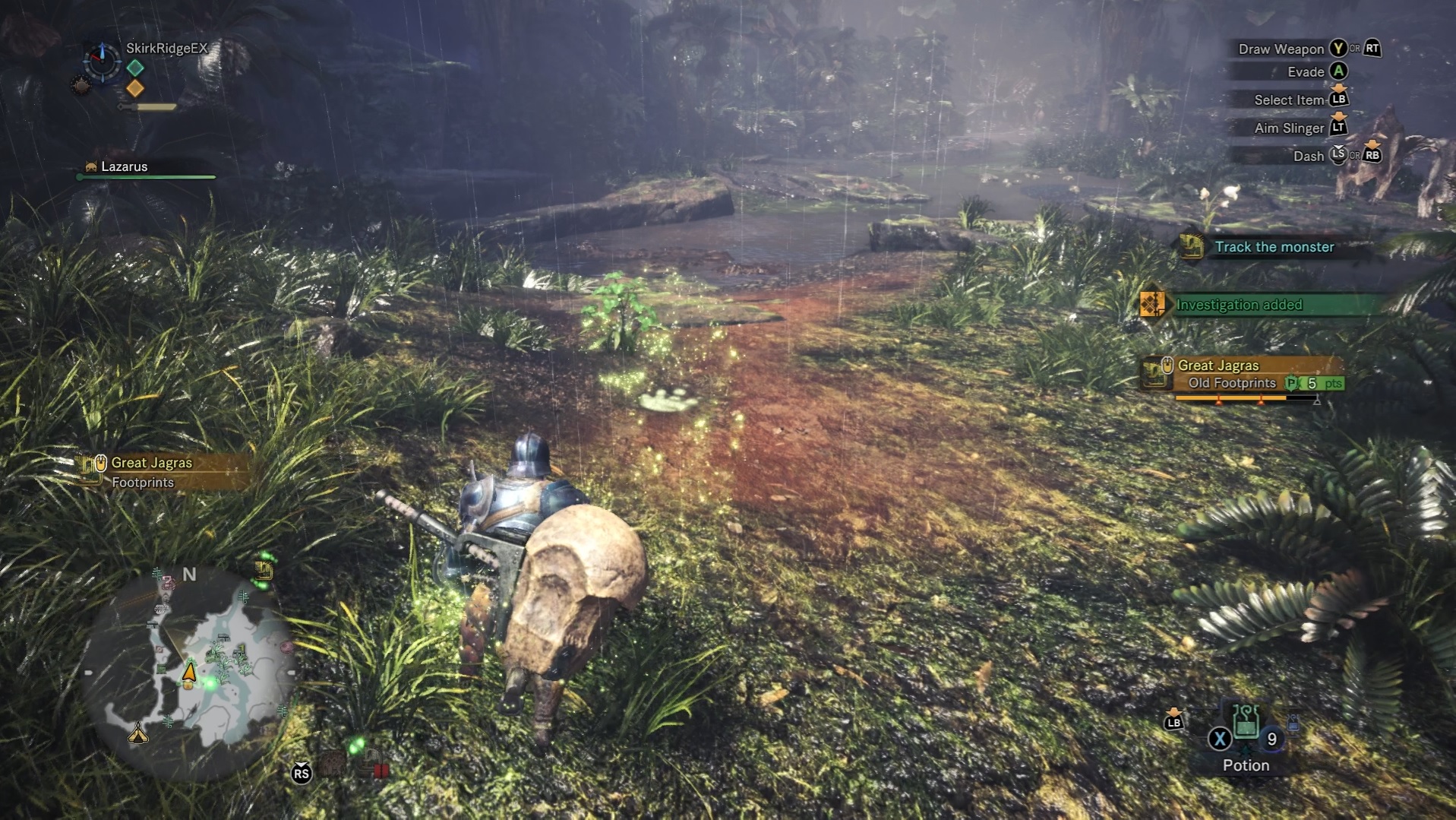 How to research monsters in Monster Hunter: World

Unless you're actively chasing your hunt of choice, you can follow your Scout Flies to find the various tracks, which will give a small amount of research points upon interacting with them, as well as a boost to your research level for that monster. Some tracks like old footprints give minimal experience, while others such as skid marks require a bit of time to harvest for information, but provide a larger amount of experience towards both monster research and scout flies.

Research points are a separate currency that can be spent on multiple things, such as buying new armour at the Armoury, paying for meals at the Canteen, setting up new camps on the various maps, and for use in the Botanical Research Centre. Later on you'll also be able to send random Palico adventure teams from the research base off on expeditions to find more loot for you while you go on quests. The easiest way to gather them is to be as vigilant as possible when tracking a monster, but there are other ways to obtain research points that don't contribute to researching a particular monster.

Another relatively easy early-game way to obtain research points is to complete bounties. You should be doing this regardless of whether or not you're looking for research points, but they can provide a good amount of points to spend, provided you're diligent in accepting and finishing these bounties.

Once you're a bit further into the game, you can also farm Beryl in the Elder's Recess for a potentially huge amount of research points. Certain skills can be equipped to increase the amount of research points obtained, as well as the number of times you can mine a particular Beryl deposit. If possible, time venturing into the area for an expedition during an upsurge of Beryl deposits for the highest concentration of loot. You'll gain a minimum of research points for Blue Beryl obtained, while True Beryl grant a few more, and Noahstone (which are very rare) can potentially grant a huge amount. Since the deposits respawn after a while, you can farm as much as you need before heading back to Astera. 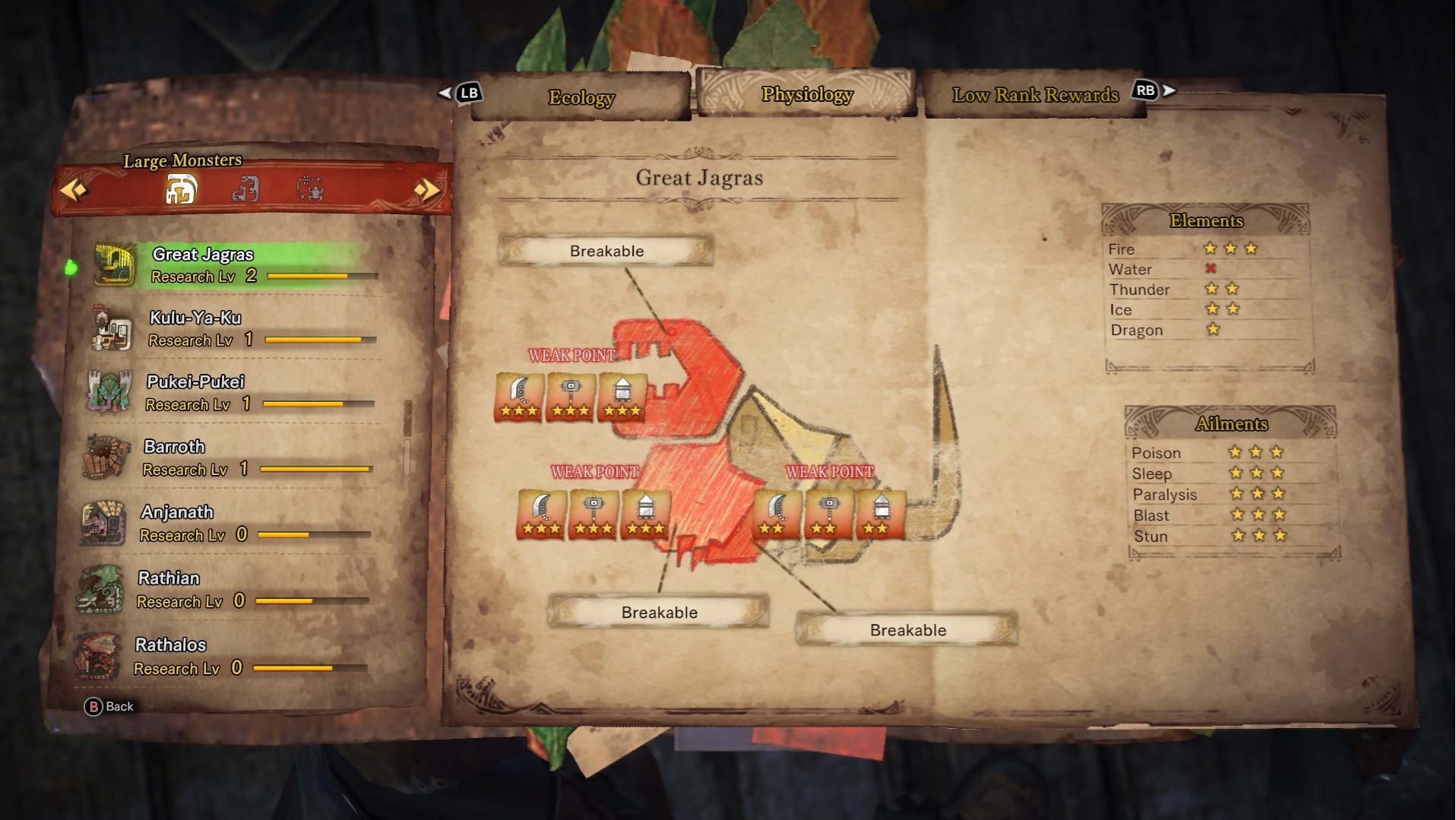 How to find out what a monster is weak to in Monster Hunter: World

The other option when you first open the menu is a section called "Monster Field Guide". This can also be opened via the pause menu at any time. With the first tab, you'll see some details about the monster, including information on its habitat and how it behaves in certain conditions. You can also see how many you have killed and how many you have captured, as well as the smallest and largest specimens hunted. Note you can also see details on smaller creatures and creatures such as fish that have been harvested as well.

Next tab along is the Physiology, which is where the various strengths and weaknesses are detailed. You'll have a sketch of the monster with sections highlighted to show what can be broken for additional loot. Note that breaking certain parts of the monster can also knock it prone, allowing for you to get a fair few more hits on it. Weapons are categorised into three types here - bladed, blunt, and ranged, with stars indicating how much damage you'll do to that monster if you attack that body part.

In the example above, all weapons are good against the Great Jagras' head and stomach, while all weapons are slightly less effective against its front claws. There are other monsters where certain weapons do more damage to a particular body part than others, so do study each monster once you've ranked the research level up by one level. Some monsters have tails that can be chopped off, so be sure to bring bladed weapons for lopping off this vulnerable part of their anatomy.

There's also a list of the monster's susceptibility to being attacked with various elements and ailments. Two stars indicate normal damage, while one star is a resistance and three is a weakness. If a monster has a red cross instead under a certain element, it can be immune to it. Occasionally, there is also a brackets next to the ranking, indicating that if a monster covers itself in mud or hardens, the resistance changes until it wears off.

Finally, you'll also be able to unlock the ability to see what Low Rank Rewards you can salvage from each monster and the frequency that this happens. The monster's sketch shows which parts can be broken for which materials, while carving and hunt rewards are also shown. Eventually you'll also be able to unlock details on High Rank Rewards, which go into the same detail but for the much tougher high rank item materials.