Your first foray into the frozen wilds of Monster Hunter World: Iceborne will pit you up against the Beotodus. Think of this ice fish as the more aggressive version of Jyuratodus, as it has some very powerful strikes that inflict the nasty Iceblight status ailment. If you're struggling to hunt Beotodus, or are a bit rusty to hunting monsters, this guide will get you up to speed.

Our Monster Hunter World Iceborne Beotodus guide will explain the strategies for defeating the Beotodus, detail all of its weaknesses and resistances, and show the loot table for all the items you can get for defeating this beast. 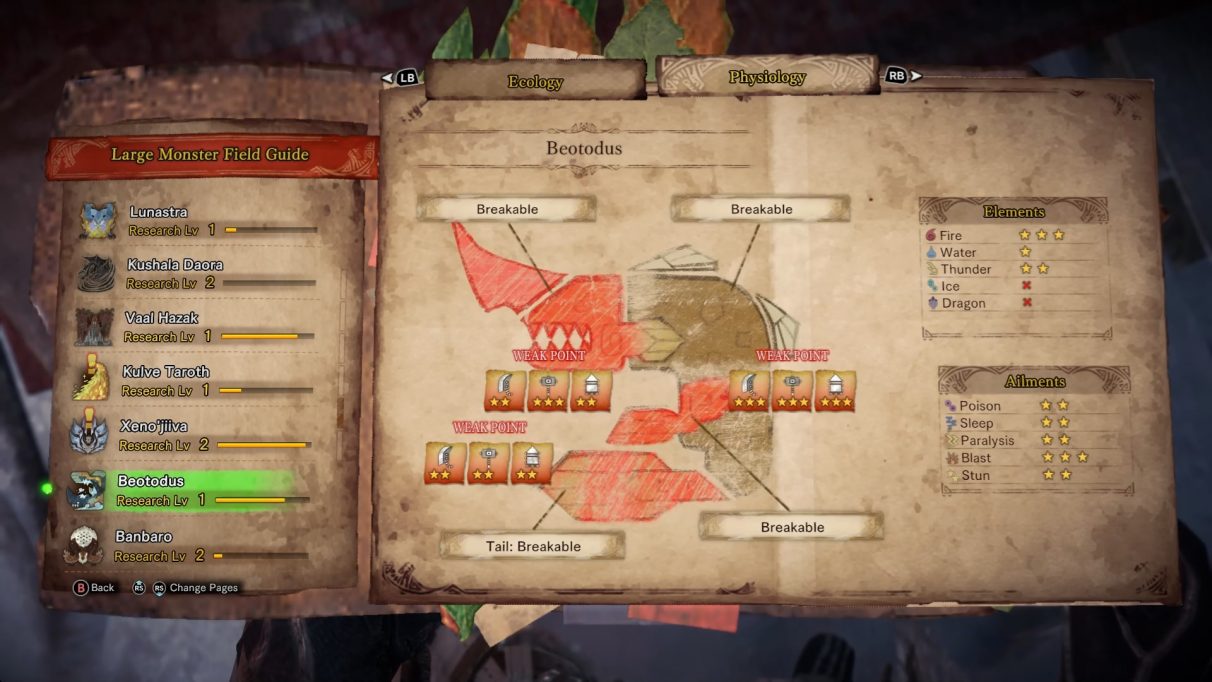 Its weakest point are the legs, though for the majority of the battle, you won't be able to damage them as they're submerged in the snow. What is on show however can be breakable and the most effective way to do so is to use blunt weapons such as the hammer to shatter its face. You can break all segments of the Beotodus, but its tail and head are the other weak points.

As for weaknesses, fire and blast are the go-to elements and ailments for this fight. Blast is particularly effective at shattering its ice armour. All the other ailments are only slightly less effective compared to blast. You should have a wide variety of weapon types to choose from at this stage, so as long as you don't bring water, ice, or dragon weapons to this fight, you should be fine. 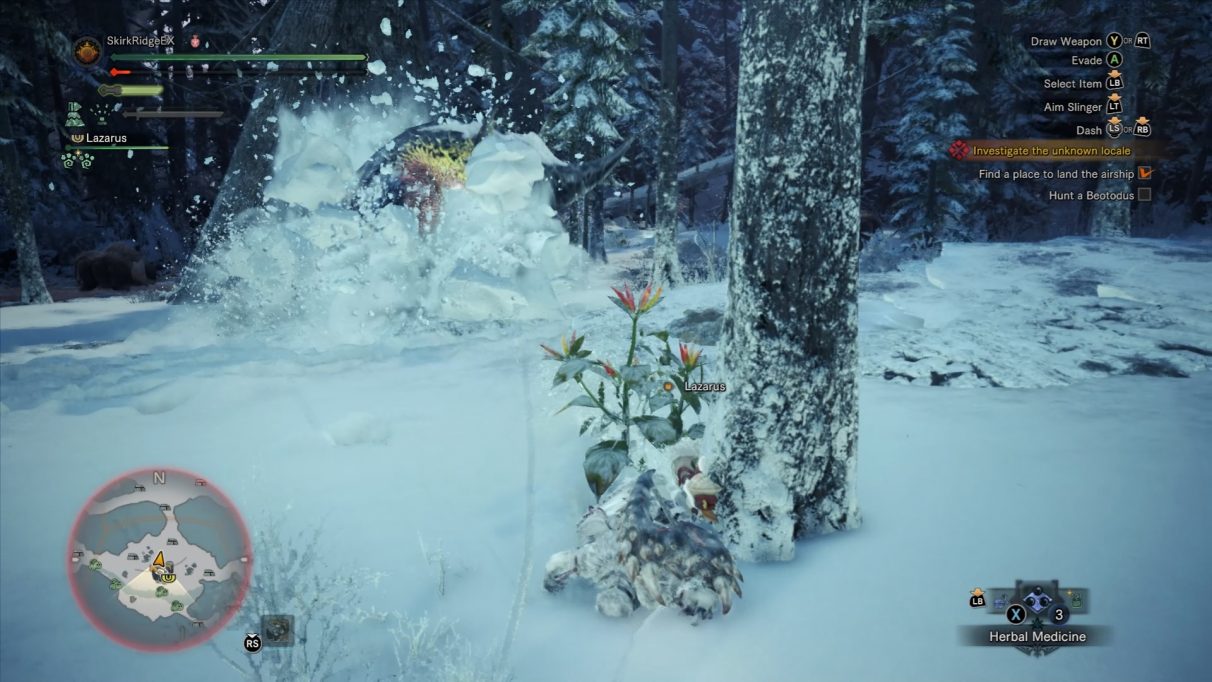 For the unprepared, Beotodus can prove to be a big problem. Remembering the first rule of Monster Hunter is key to winning this fight and that rule is being prepared. Ensure that you eat a hearty meal, or at least consume potions and other consumables to increase your maximum health and stamina. You'll also want to have the right weapons and armour equipped.

The Beotodus has many attacks in its "swimming" state. This is when it's half-submerged in the snow and you can't see its legs. Most of its attacks in this state inflict the Iceblight status ailment, which increases stamina consumption for one minute. It can be cured by using either a Nulberry or a Cleanser Booster, but it can also be prevented entirely by having 20 Ice Resistance, the Blight Res Up or Blight Negated effects from the Hunting Horn, equipping the Blight Resistance Skill, or wearing the Iceproof Mantle. It can be countered by decreasing Stamina usage with the Stamina Use Reduced Status Effect or Skills such as Marathon Runner, Guard, and Constitution. Standing or crouching in hot springs will also negate Iceblight.

It has plenty of other attacks that it can use, so here's how to avoid them:

How to attack Beotodus' legs

Breaking parts of the Beotodus will cause it to change to what we're calling its "standing" state. This is where you can see it standing on the snow rather than swimming through it. While its in its standing state, its attacks are also less aggressive. When it looks at its tail, it'll swing it around. This is easily avoided by dodging out of its radius. It also has a bite attack, a short hop, and a sideways barge in this state.

There are plenty of other things to watch out for in this fight, so here are a few more tips: 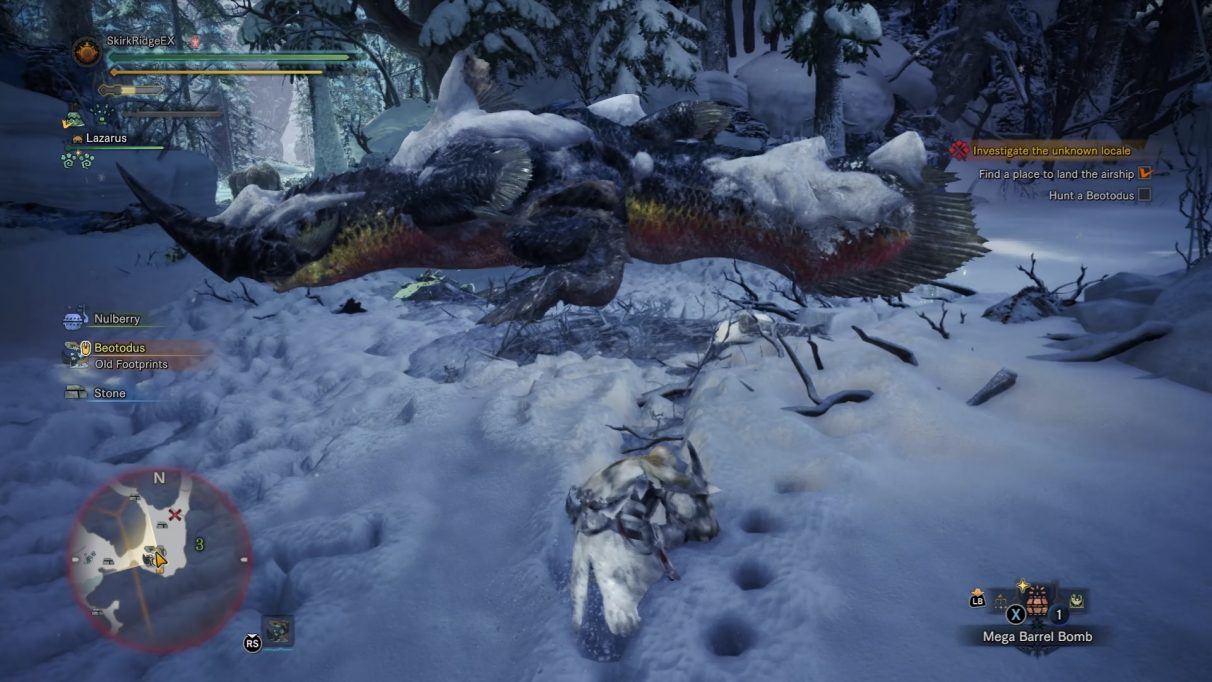 When you've beaten the Beotodus, you'll be able to get a ton of different Beotodus materials. These are all the brand new Master Rank items which are used to make tons of Master Rank gear. Below are all the items that you can get for breaking certain parts/defeating the Beotodus:

We have a whole host of other useful Monster Hunter World Iceborne guide pages for your convenience. Why not take a gander? The next boss on the list can be found in our Banbaro guide.