The first monster that Capcom showed us for Monster Hunter World Iceborne was the Banbaro - a stag-like wyvern that is generally quite peaceful. However, if you cross it, it will use its antlers to scoop up boulders and trees to charge at you relentlessly. Banbaro can therefore be a bit of a handful to hunt if you're going in unprepared.

Our Monster Hunter World Iceborne Banbaro guide will explain the strategies for defeating the Banbaro, detail all of its weaknesses and resistances, and show the loot table for all the items you can get for defeating this beast. 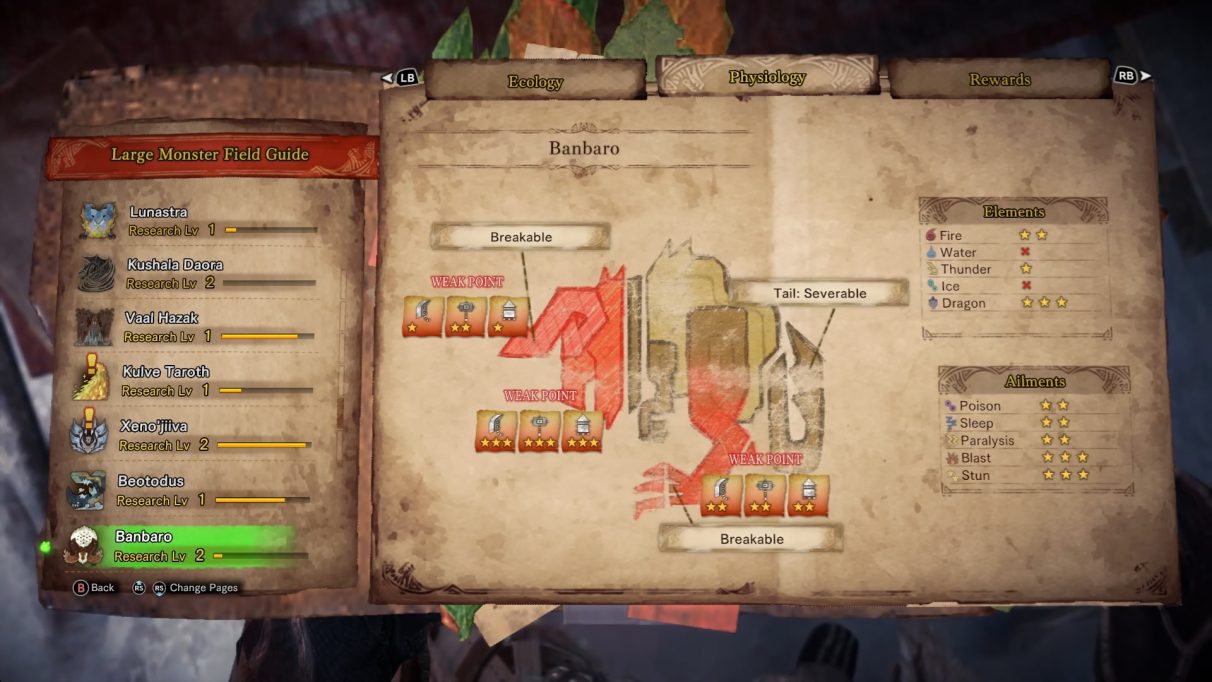 Banbaro's antlers, face, and feet are the designated weak points.The tail is severable, but is not one of its weak points. While all weapon types are reasonably effective against the Banbaro, bringing in blunt weapons such as the Hammer can make breaking its horns a little easier thanks to their increased vulnerability.

The Banbaro doesn't have any ailment resistances, but it's particularly vulnerable to blast and stun effects. While using fire against it is good, it's main elemental weakness is actually Dragon. Since it uses a lot of ice and water based attacks, having armour with those resistances is highly advised. Don't bring water or ice weapons though, as they'll be next to useless. 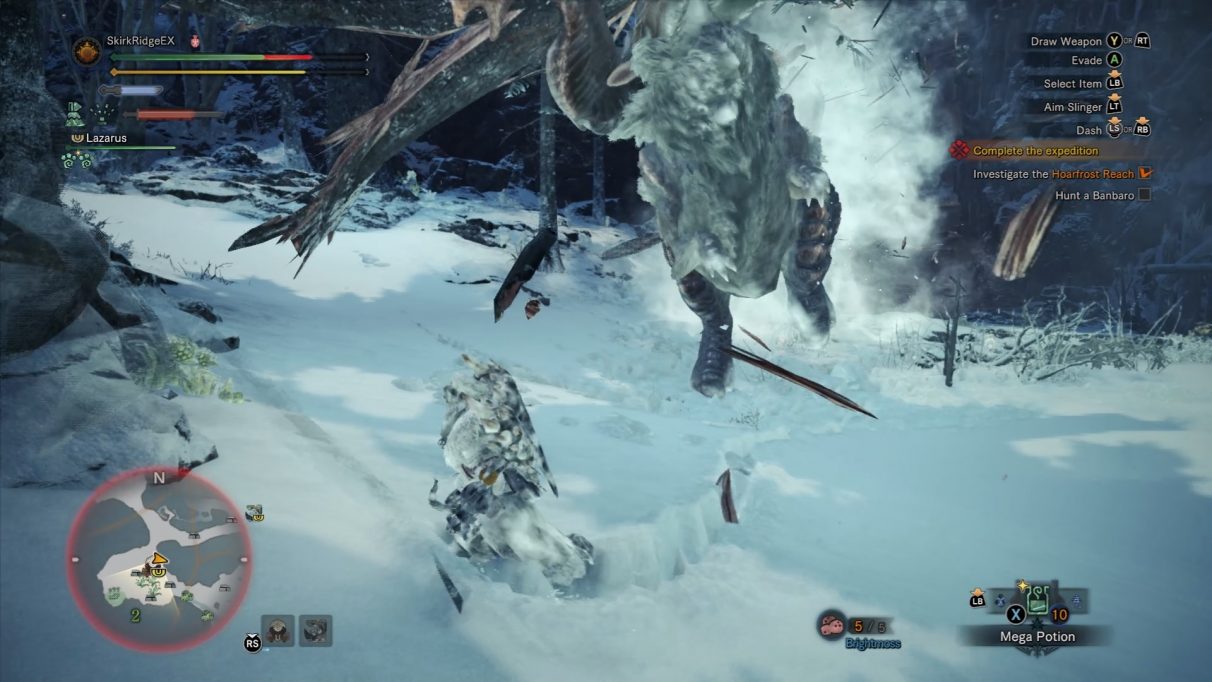 Fighting the Banbaro is mostly about dodging its many dangerous charge attacks, then running in to attack it while it's recovering. As long as you've eaten, or otherwise increased your maximum health with items, none of the Banbaro's attacks will kill you instantly.

You're a little safer when up close, as its attacks include ramming you with its side or with its horns. Neither of these attacks have an obvious tell, but look for it rearing back a little bit. It also has a tail swipe that it telegraphs which direction it'll swipe if you look at which way it is facing. A hard attack to predict is when it shakes its antlers from side to side, while stepping backwards. Should you come across this attack and are not immediately hit by it, back off for a short time before running in to resume your assault.

How to avoid Banbaro's charge

There is one main attack you need to keep a lookout for. The Banbaro will slam its horns into the ground and begin to charge. Dodging to the side will help avoid damage, but it'll occasionally pick up a boulder and roll with it. If it does this, don't immediately approach as it may charge a second time, before finishing the move by either slamming the rock or bowling the rock behind it.

While the boulder variant is easy to dodge, try to lure Banbaro away from any trees if possible. Should the Banbaro charge into a tree, it will immediately unearth said tree and use it as a battering ram. This attack hurts a lot and can be tricky to avoid if you're not already running to the side.

After it charges, it may stand there panting for a short time. This is when you should close the distance and attack. You can use the Clutch Claw to close the distance or target a specific body part if needed. If you're a short distance away, say a couple of seconds of sprinting to reach its legs, it can also slam its horns into the ground to pick up a boulder to flick in your direction. Stay vigilant whenever you're approaching from a distance, as this can come out of nowhere. 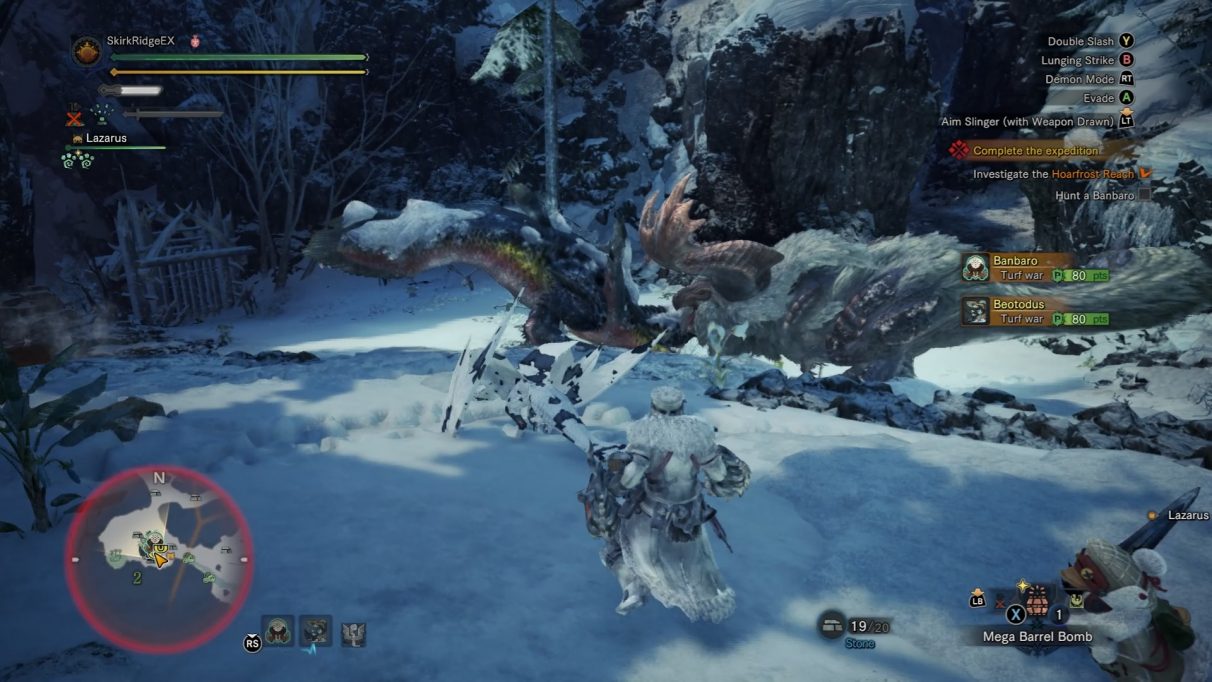 When you've beaten the Banbaro , you'll be able to get a ton of different Banbaro materials. These are all the brand new Master Rank items which are used to make tons of Master Rank gear. Below are all the items that you can get for breaking certain parts/defeating the Banbaro:

We have a whole host of other useful Monster Hunter World Iceborne guide pages for your convenience. Why not take a gander? If you want to check out the previous boss guide, head to the Beotodus guide. The next boss on the list can be found in our Viper Tobi-Kadachi guide.