Let's face it, Monster Hunter: World's Palico are adorable little furry sidekicks that are significantly superior to regular cats. They follow you into every single hunt, desperately trying to keep up as fast as their little legs can carry them, and usually eating attacks for their trouble. Their use is rather limited initially, but the skills and equipment you can equip them with can make all the difference. They even level up frequently to become more useful to you. They're surprisingly complex to fully understand and use effectively, but you'll be glad for their help whenever a monster attacks them instead of you. This guide will not only give you details on how to upgrade them, but also where to find all the Grimalkyne needed to unlock new abilities.

Your customised Palico is your loyal servant, able to aid you by not only distracting enemies to allow you to have some breathing room, but also use special abilities to further support you in your monster hunting endeavours. While they can help, it's better to get to grips with how the rest of Monster Hunter: World works before delving into upgrading your cat's equipment, so you can look at our Monster Hunter World guide for more information on that. 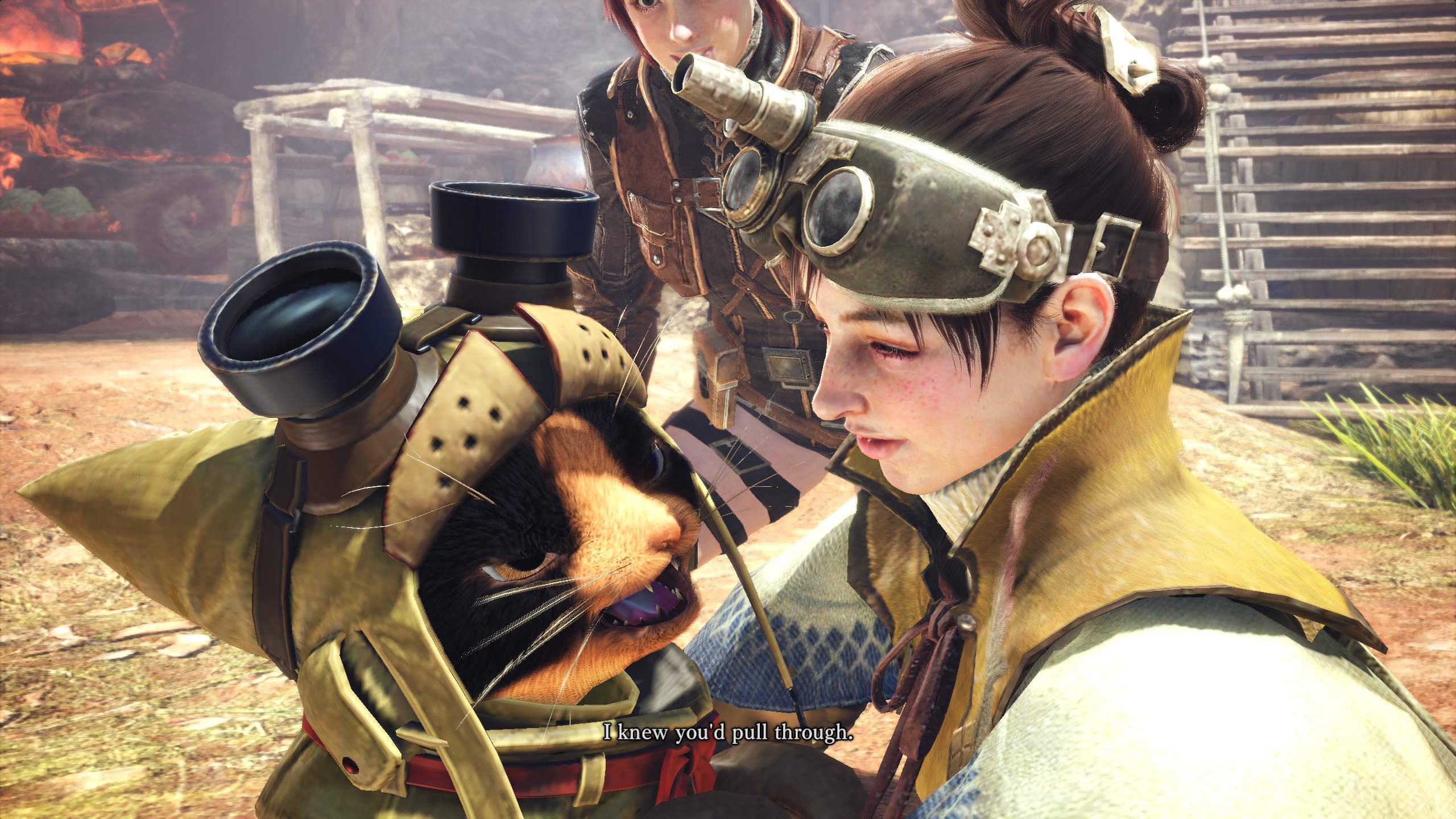 What can Palico do in Monster Hunter: World?

These resourceful kittens are surprisingly versatile companions. Their main purpose is to aid you in battle by providing a necessary distraction, or to use skills that either heal you or affect monsters directly. They're not going to do the heavy lifting when it comes to dealing damage however, so are not an effective singleplayer substitute for other players online.

However, they are also able to harvest items alongside you, as well as acting as your gateway to finding Grimalkynes - a similar race of Felynes that are native to the "New World" that Monster Hunter: World takes place. They also gain experience for successful hunts and their skills can be upgraded to be more useful, effective, and frequently used.

Once you've defeated a monster for the first time, you'll unlock the ability to craft new weapons and armour for your feline vassal. Thankfully they don't cost anywhere near as much to craft as your own personal armour upgrades - you can find more about that in the Monster Hunter: World armour guide - but each one is better suited to dealing with certain monsters than others, so be sure to change its clothes as soon as you change yours.

They can also have new weapons crafted for them that can potentially deal elemental damage or inflict a status ailment on your enemies. Status ailments can be incredibly useful, particularly for facing certain enemies that are a pain to hit yourself, but have a specific weakness, so try to prioritise that for dealing with larger foes. 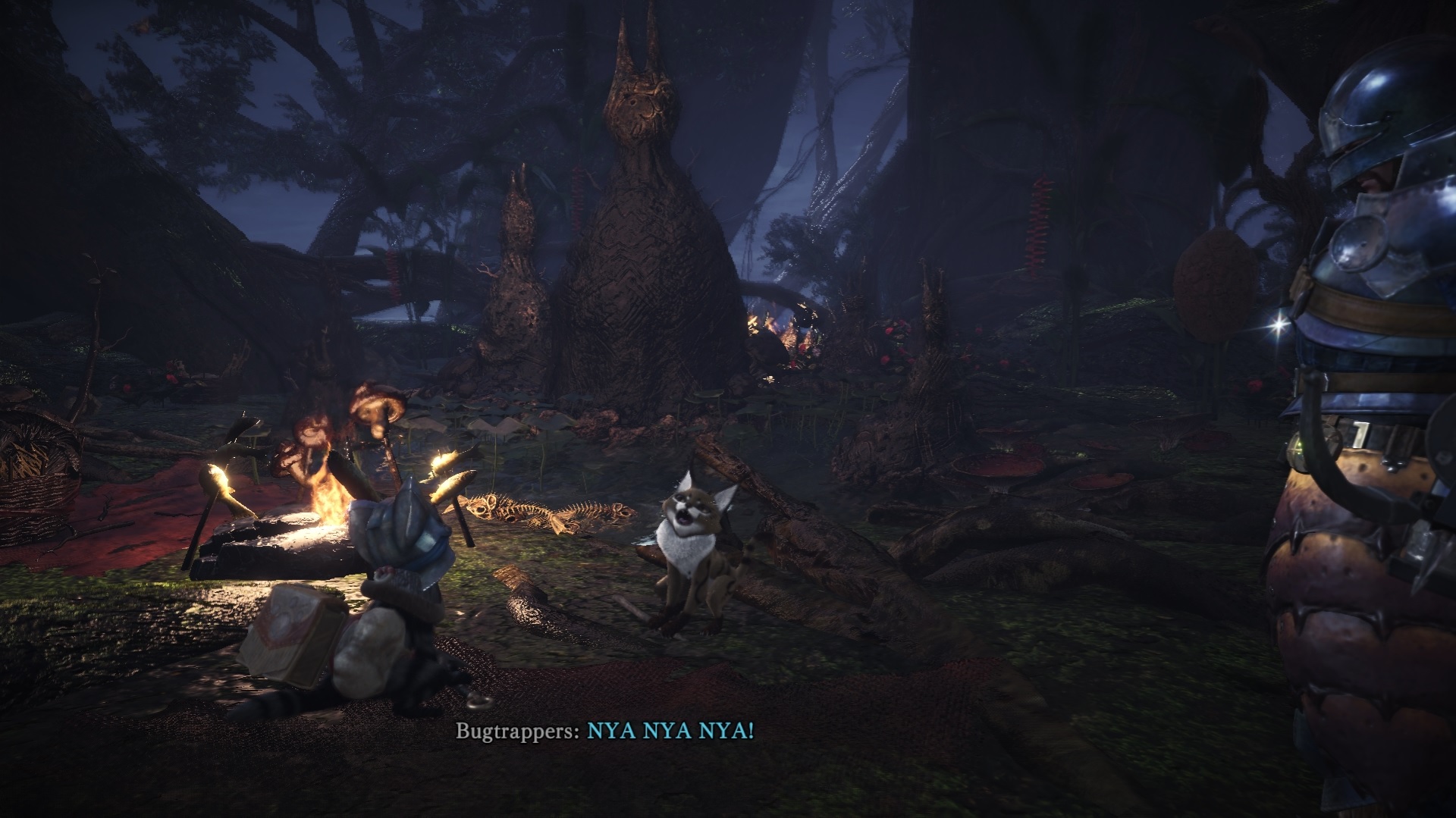 Where to find all the Grimalkynes in Monster Hunter: World

Palico can get more skills, but in order to obtain them, you'll need to seek the help of Grimalkynes. These small cat creatures are similar to the Palico but are a little more on the feral side. They can also teach your Palico how to speak to other monsters in the local area, which can be of help when dealing with certain larger foes, and they can provide aid to those who have befriended them for a short time if found on the map. Once you've befriended them and they follow you, you'll also increase their health and effectiveness in battle as you go on hunts. There's one tribe per area, so below are the steps you need to take in order to befriend each area's Grimalkyne.

When you first go out on an expedition in the Ancient Forest, there is an exclamation point nearby the camp in Section 1. It's along a windy path that shoots off to the north just short of the big plains. There you'll find a researcher who will tell you about the Grimalkynes. From this point, there will be various doodles that you can research to get a pinpoint on their location, but really you just need to climb the big tree, ending up near Section 17 of the map, which is in the north-east.

As you climb upwards in this area, you'll eventually run across a Grimalkyne that flees. Chase after it, swinging across vines, until you reach the top where the tribe reside. The Grimalkyne will recognise you as warriors and grant your Palico their ability - the Flashfly Cage, as well as teach your Palico how to speak to Jagras.

Found in Section 8, north-east of the map, there is a small hole nearby that you can drop into. In this hole, there's a small gap that you can crawl through, which will lead you to the tribe. They will ask you to complete a critical bounty to round up three of their tribe, scattered around the map. They will show up on your mini-map upon taking this bounty. To capture them, equip your capture net and head to their location. These runaways will be wary of you, so fire the nets from a small distance and aim high.

Once you've captured all three of the Grimalkyne, head back to the hole in Section 8 and talk to the tribe elder to complete the bounty. Upon completion of this bounty, your Palico will be granted the Shieldspire skill, as well as the ability to talk to Kestodon.

Head to Section 8 and climb the vines to a nearby cave. You'll discover a group of Grimalkyne on Shamos mounts that will attack you. Defeat them and follow their trail to their camp, found in Section 11 in the north-east of the map through a waterfall.

You'll then get a quest on your quest board called "Troubled Troopers", which requires you to hunt two Tzitzi-Ya-Ku. Once you've completed the quest, your Palico will receive the Coral Instrument, as well as the ability to speak to Shamos.

Before attempting to find the Grimalkyne here, you'll need to advance the story to the fourteenth quest in order to unlock the lower level of this region. Once you've done so, make sure you have a stash of Raw Meat in your pouch as you'll need it to lure these felines. Find the researcher in Section 13 and talk to him after scaring off the Grimalkyne. Next, head to Section 15 where you'll find the Grimalkyne once more.

It will run off once more, but your Palico will comment that it looks hungry. Put down a piece of meat in the small circular part of the ground near the impassible territory where the Grimalkyne ran off, then head back to the mouth of the cave looking at the area. After a short time, the Grimalkyne will come back to inspect the food you laid out. It's important to not move at this point. Your Palico will eventually comment that it seems to be calling for its friends, who will arrive shortly afterwards. Once they've done so, approach the Grimalkyne. They'll give your Palico the Plunderblade, as well as teach them how to speak to Girros.

Once you've collected all four of the other Grimalkyne skills and reached the Elder's Recess, talk to the researcher in Astera who now has an exclamation point above him. This will unlock a critical bounty to 10 Gajalaka tracks, found near any Gajalaka in the field, but there are also ones in areas on some maps that are out-of-the-way and seemingly not connected to anything. Once this is done, head back to the researcher in Astera who will give you a new critical bounty to discover the Gajakala settlement.

To do so, speak to the researcher at night, found in Section 8. He'll tell you to come back later if you're too early, so you can use that time to make sure you're prepared to sneak around. One thing that is mandatory for this quest is to have the Ghillie Mantle to stay hidden. To complete this request, sneak through when the guards are dancing and not paying attention.

Eventually you'll come across a small hole. There you'll find the Elder who upon speaking to will grant the Meowlatov Cocktail skill, as well as the ability to speak to Gastodon. This won't necessarily deter all Gajalaka from attacking you ever again, but you'll certainly have allies in the Elder's Recess. 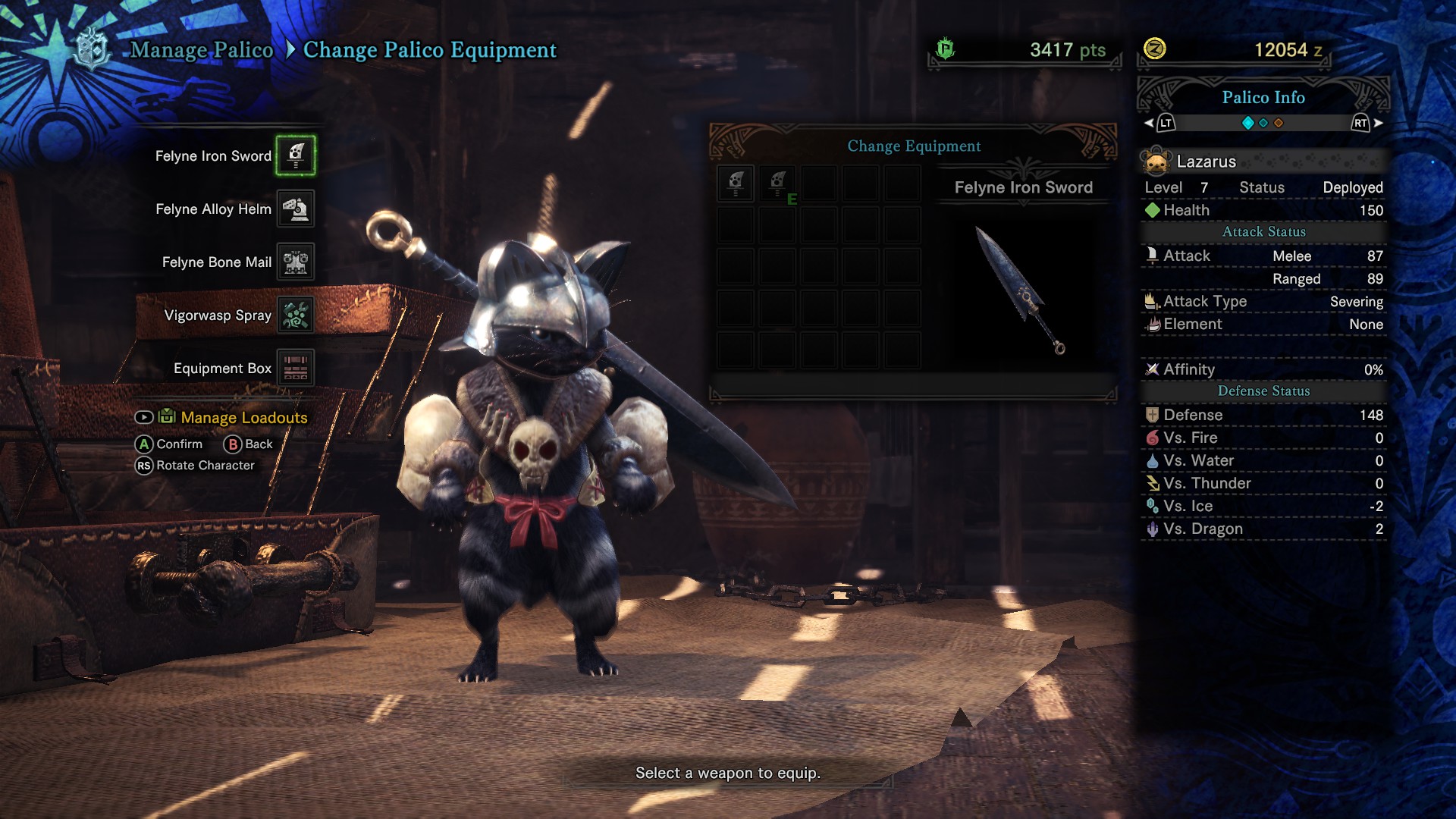 What skills can my Palico learn in Monster Hunter: World?

So now that you have the skills, it's time to learn what they can do. When you first start out and find your Palico in Astera, your pal only knows one ability. However, through the discovery and aiding of Grimalkynes, they can learn more abilities for use in battle. In order to swap which abilities they have, you'll need to talk to your Palico in your quarters (found on the Tradeyard level of Astera). Below is a list of all the skills, what they do, and how to obtain them.