It took a little while to get going, but goodness me I'm hooked on Moonlighter now. Take a good dose of rogue-lite action-RPG, add in permanence of equipment, and then delicately smother in a shopkeeping sim. It's a game about raiding dungeons at night, then working in the days to sell the loot from your store.

I'm not one for shopkeeping/gardening/tax-form-filling, or any of these mysteriously popular boring-job-sims that you kids love. So let that be the words of relief needed to anyone else put off by the idea. Stick with this.

You play as Will, a young adventurer stuck with the task of running his late father's shop, Moonlighter, in the failing village of Rynoka. Your grandfather's hope is that by rejuvenating your store, you can help bring back prosperity to the town, encourage other businesses to open, and for goodness sake, stop trying to open the Fourth Gate because that's what got your father killed. 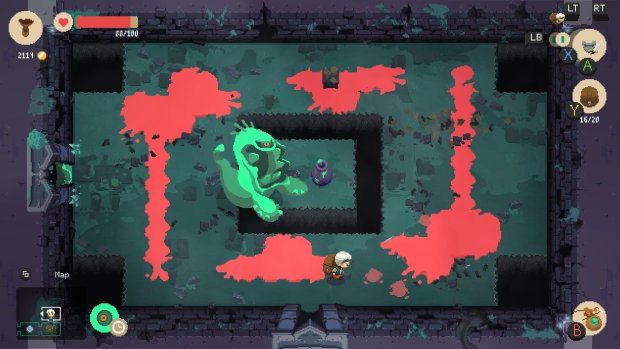 But in order to find goods to sell, Will is going to have to visit the mysterious dungeons that recently opened up on the edge of town. Rynoka has been visited by respawning, randomised, thematic dungeons, and no one knows why. Which is Moonlighter's rather sweet way of making this staple of such games part of the narrative. Everyone knows they're randomised, everyone knows you can revisit them and all the monsters and items will respawn in new ways. In fact, you'll find the notes of previous adventurers who have tried to fathom these peculiarities, to find patterns within them. 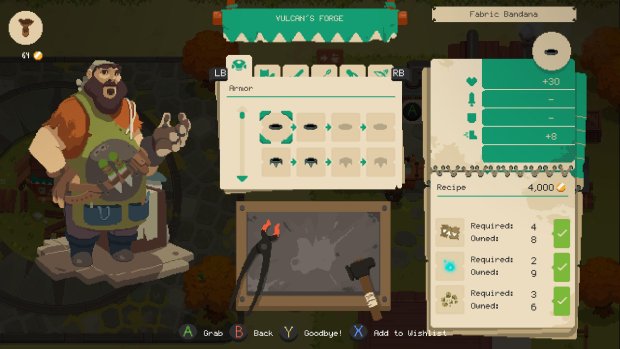 As you charge through a dungeon's rooms, on each of its three levels plus a boss fight, you gather so, so much loot, which you must store in your 4x5 inventory spaces. Items stack, but it gets more complicated than that. Due to multifarious curses on many of the items you find, both as drops from the combat, or in chests opened when rooms are complete, there are very particular ways some can be stored. Something might have to go on the left or right of the inventory, for instance. Or top or bottom. Or it might be a curse that causes whatever's to its left when placed to be destroyed, so make sure that's on the far left. Maybe it'll be something that only destroys an adjacent item when you return to town, so it's fine anywhere for now, but for goodness sakes don't forget. And then there are many more variants to discover as you progress.

The aim is, see how much you can squeeze into your pockets on any one run, and indeed see how far through a dungeon you dare go before you chicken out, or get killed. Die and you'll lose everything except for the top row of your inventory, and that's brutal. Go back to town using a magic pendant and it'll cost you a sum of gold. Get to the end, beat the boss, and you can head back for free. So all that must be weighed up too. 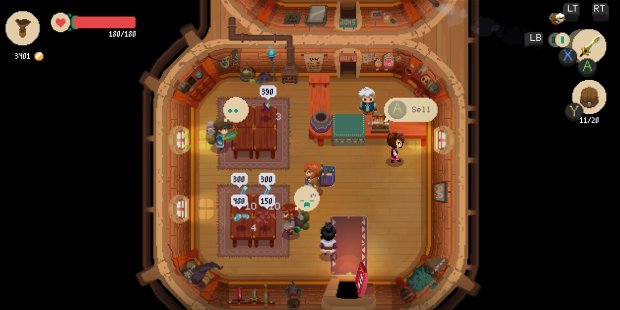 Then, when you're back, it's time to put these items out on the tables in your shop (expandable through expensive upgrades), and choose how much you'll charge for them. That's a tricky bit, because at first you'll have no idea what anyone's willing to pay. Experimentation is the solution. Is this old pot worth 10 gold or 1,000? Price it at the latter, and when you open the shop and customers come in, they'll look at it and weep if it's far too high. Far too low and you'll see their thought-bubble expressions glint with greedy delight. Get it just right and it's a happy face, just too high and it's a glum and reluctant face. The game stores which prices got which reactions for each of its hundreds and hundreds of items, so you can see whether you went criminally low before and bump that price the next time.

I've found myself thoroughly enjoying these shop antics, surprising myself. I think mostly because it's not a case of pricing up and pressing GO. Instead it's a lively experience, where you run between tables re-pricing things after people's horrified reactions, or re-stocking tables with new items on the fly, then dashing back to the sales desk to take customer's money. On top of all that, you need to keep a look-out for thieves, and intercede their attempts to half-inch items from your store. There's a limited time during which the shop's open, so you try to sell as much as you possibly can, before night falls, and it's time to spend your cash and head off adventuring once more. Or, as it happens, sleep in bed and do some daytime raids for an easier time, but with slightly poorer loot.

None of this would be worth anything if the combat were no good, so phew, it is. It's a pleasing mix of weapon types to suit your desires - do you prefer a slow heavy sword with a long reach, a shortsword/shield combo, bow and arrow, spiky pole, or rapid vicious gloves? You can take any two on a raid with you, and switch between to suit the millions of distinct enemy types, which are all really superbly different, each requiring their own ideal approach to be defeated. There's also a rolling evasion mechanic that is not only fun to use, but mercy me, actually allows you to move more quickly than standard running - none of the peculiarly mean movement delay that seems so ubiquitous in these games just now.

Then you can invest your cash into enticing other stores to open in town, who'll sell you new equipment and potions, enchantment upgrades, that sort of thing. And these too will rely on recipes formed from loot you've retrieved, as well as payment. Meaning you also need to think about what loot you don't want to sell at any given point. 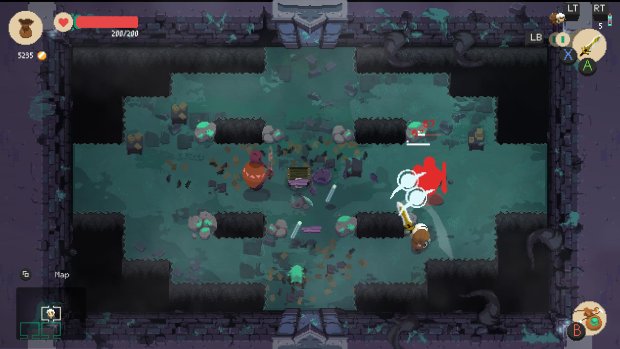 So hopefully you can tell, there's an awful lot going on here, much, much more than the "oh another pixel roguelite ARPG" the screenshots might suggest. It's also worth noting that the screenshots don't do it justice, either. Moonlighter stands out by the astonishing fluidity and detail of its animations, which are sumptuous and stunning.

There are, however, some issues. It takes far too long to get going. I began to wonder after a few hours for how long exactly I was expected to grind that first dungeon until I could start making the sorts of money needed to open up more interesting aspects. It turns out it was pretty much straight after fatigue had set in, but sadly, after. With two dungeons open, a larger shop with many more customers, a bunch of other retailers, quests from customers on top of your current goals... the game really starts to shine. That's as far as I've gotten, and I really don't want to stop. There are at least two other dungeons, and that big gate I'm forbidden from opening. And indeed the next sword, which requires one more loot type I still haven't found, and I want to get the bank open, and see if I can get the tens of thousands of gold I need to upgrade my store yet again, and...

It definitely needs more variety earlier on, but when Moonlighter gets going, it's tremendously compelling. I'm playing on Hard, because the game said I should, and I do have some concerns that it's becoming a little bit too easy at this point. I think perhaps some balancing of difficulties might still be needed. And there are some bugs in there, most annoying being the map opening up blank on random dungeon spawns, as well as some spelling mistakes. But not so many, and none particularly important.

It completely has me in its grips now. I want to know what it means that the later dungeons are for adventurers only, not merchants, and I want to know just how big a store I can run, and will I ever get security guards to deal with these bloomin thieves? It's very charming, very beautiful, and both its comprising halves are enjoyable in their own ways.