Nioh is the kind of game that this column exists for. On release it quickly saw itself buried beneath the comparisons to Dark Souls, praised for the ways it imitated the series, and criticised for its failings in repeating From Software's successes. But while Nioh clearly follows in the precedent set for the genre by Dark Souls, it does so in the same way something like Monolith's BLOOD follows Doom: with a clear lineage, but with very different aims and aesthetic goals.

Nothing illustrates this difference in attitude more than the ki pulse.

The ki pulse is the philosophical manifestation of the martial arts kiai. It is a release of breath, a shout to throw off the enemy and focus your spirit. An expression of your intent to strike, to kill. It is also, to put it less elegantly, an active reload for your stamina. The ki pulse changes stamina from a bodily limit into an invitation for a ballet of breathtaking violence.

Other games in the genre use stamina to measure how many moves you can make before resetting to neutral. Stamina is the referee declaring a round over, awarding the points. Nioh instead invites those skilled – or foolhardy – enough to declare their intent and take another step towards the killing blow. A perfect ki pulse can refill all the stamina used by a combo and opportunities only build from there. Each class of weapon has its own skill tree, all governed by the use of three stances: high, middle and low. Moves vary between each stance, allowing you to change your focus between heavy, damaging strikes, solid defense, and quick, evasive movement. Most importantly, stances can be changed alongside a ki pulse, and can confer attack bonuses when done successfully. It's even possible to switch weapons upon a ki pulse, or gain the ability perform the pulse with a well timed dodge. 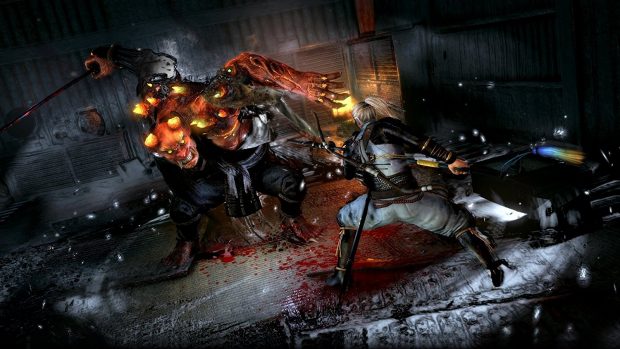 This makes combat technical, demanding, and fluid. Encounters move between strikes, stance changes, evasive maneuvers and weapon changes, before returning to neutral with a final breath. Then you perform the final flourish: flicking the blood off your sword – feeding the blood of your enemies to the earth – before returning it to its scabbard. And yes, Nioh models the build up of blood on your weapon just so you can have that satisfaction.

All this is before we even get to one of Nioh's best aspects: the fact that your enemies also have stamina. This is true even of bosses, and well timed attacks can take advantage of this to deplete an enemy's remaining stamina and set them up for a killing blow. You must learn the rhythms of your own breaths and movement, but you can also take advantage of theirs. Watch an enemy closely and you can bait them into expending their stamina. Then you can begin an attack with a series of sword strikes, followed by a retreating blow, dodge, or ki pulse, transitioning into long range kusarigama swings that wear them down before ending with a series of kicks that depletes what's left of their stamina entirely. They'll be dead by this point, or if not, collapsed beneath you and ready for the final blow.

Or more likely you'll whiff one of those ki pulses or stance switches, waste all your stamina, and be ungracefully murdered by a common bandit. In that case you'll be greeted by one of the greatest death screens in videogames. A splash of Japanese calligraphy accompanied by text that reads:

FREED FROM THIS MORTAL COIL. 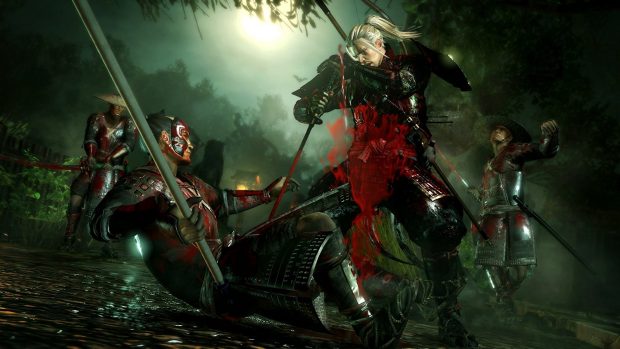 It's so good. I can't even be mad. Which is good, because you'll be seeing that screen constantly. Nioh doesn't use the loops of death and repetition for much in terms of thematic content, but rather to communicate the lethality of a samurai fight, the terror of the supernatural. Its story contains few traces of its origin as an unfinished Akira Kurosawa script, but its combat still communicates the flow of his film's battles. Fast. Decisive. Wretched and naked in their violence.

Of course, for all the sharpness of its combat, Nioh is blunt, even obvious, in its storytelling. Despite that, it's often effective. It delivers ghost stories like audiologs, the last words of those who've perished relayed to you as you collect an area's trinkets. Maybe that medicine is accompanied by the despair of a mother trying to escape to a hidden seaside shrine, or a weapon lays alongside the corpse of a villager struck down as bandits razed their home.

Nioh isn't about the somber majesty of a fallen kingdom, its remnants animated like abandoned clockwork by its last desires. No, Nioh's world is one scarred by a living conflict. Violently consumed by the terror of the natural world. Its yokai are spectres of an era's suffering, a reclamation of the earth from a people arrogant enough to believe they could not only intrude on, but master the natural world. There may be romance in its elegant samurai violence, but it is also a horror story of the Sengoku period. It makes clear that this war, for the peasants living through it, was not one of honor or clashing passions, but a ravaging disaster that traded their lives as currency.

Despite that, Nioh never feels like a dour game. There's plenty of levity, and it's remarkably deprecating of its English protagonist for a game that ascribes him so much agency and martial prowess. Maybe it's the awareness that comes from a Japanese company like Koei, which has long traded in historical fiction, or the work of a good localization, but Nioh's wit helps it sidestep plenty of white savior tropes that happen in stories of Westerners learning the ways of a foreign cultures. 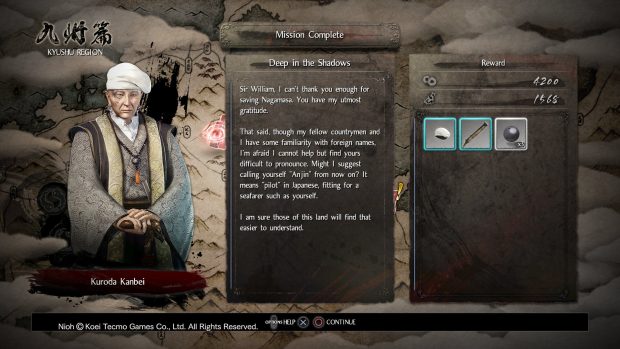 William, our English protagonist, is frequently shown as being guided by, or serving under, Japanese people. Nioh's peppered with jokes at his expense as well. There's the dry humor in the absurdity of William mastering swordplay by reading a manual on his sea voyage (while the crew was sleeping William studied the blade). There's the more overt humor in scenes such as the one where his fascination with a female ninja is met by her switching to English to forcefully rebuff him, or Hattori Hanzo showing up with a cat whose eye dilation he uses to tell the time. Then there's the subtle reversal of circumstance where the locals give him a new name because, despite them being perfectly capable of speaking English, they find his name too bothersome to pronounce for Japanese people. It's a cathartic reversal for anyone who's found themselves forced to go by a nickname because English speakers perpetually fail to properly pronounce their names (ahem), or indeed even refuse to make the effort to. And a fitting one for a man whose first words to a Japanese person are essentially "you speak good English".

It's a remarkable play on Nioh's part, and it gives it a soft warmth that rounds it out. There are so many small touches and surprises that I find myself getting carried away any time I speak of it. Had it only been that ballet of beautiful, wretched violence I'd be satisfied, but instead it's a game that I'm happy to slowly unravel with each return visit. Nioh deserves better than to be cast in the shadow of other games. It deserves a spotlight.