Five months ago, Nvidia lifted the lid on their next generation of RTX graphics cards, the GTX 1080-beating RTX 2070, the sort-of-but-not-quite-as-good-as-the-GTX-1080Ti RTX 2080 and the 4K monster that is the RTX 2080Ti. Now, the long awaited RTX 2060 is joining the ranks, and I've just had my ear talked off about it at Nvidia's CES 2019 press conference. Here's everything we know so far about their new, mid-range ray-tracing machine.

The RTX 2060 is coming incredibly soon - in just over a week, in fact. On Tuesday January 15th, the RTX 2060 will be available across the world both directly from Nvidia and dozens of third party manufacturers. You can see the whole family below, too, including cards from MSI, Asus, EVGA, Inno3D and Nvidia's own Founder's Edition to name just a few. 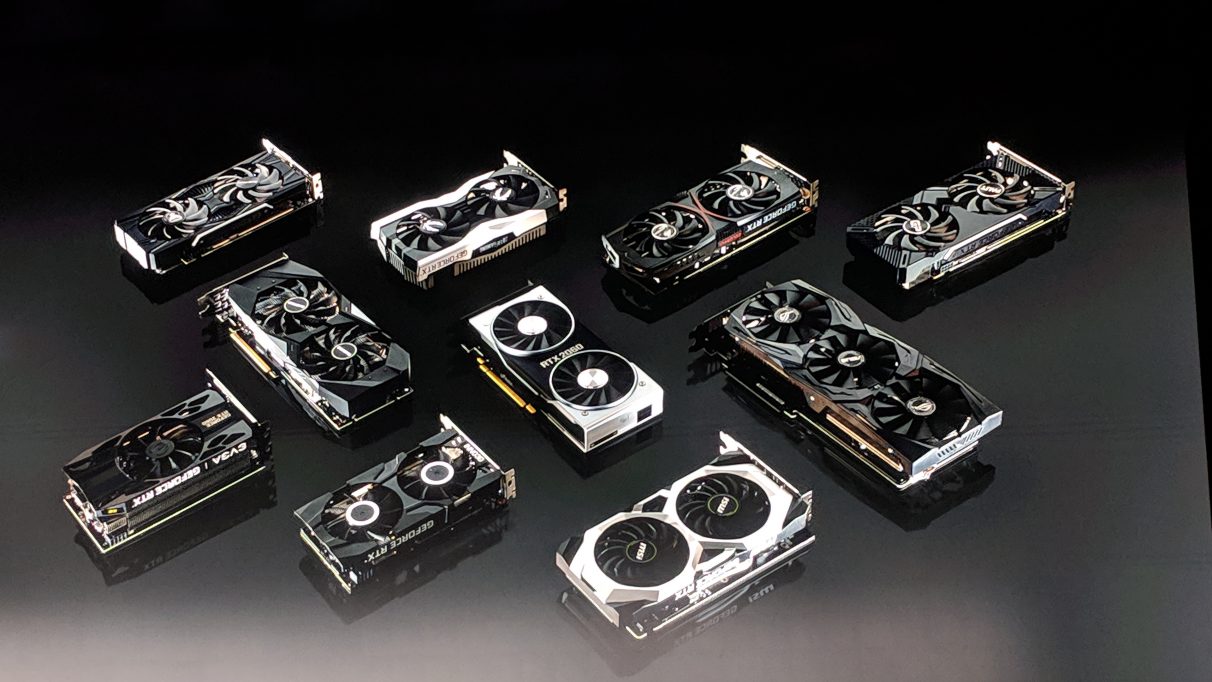 Excited? Well, the best thing is that the RTX 2060 won't cripple your wallet like the rest of the RTX family. Indeed, the Founders Edition will cost just $349 in the US (UK pricing to be confirmed), which is pretty good going considering it's actually faster than Nvidia's own GTX 1070Ti (so proclaimed Nvidia top man Jensen Huang during the press conference), which can currently be had for upwards of £400 / $450. Is it enough to break into our best graphics card rankings, though? Only time will tell.

Still, faster than a GTX 1070Ti, you say? What kind of monster specs does this thing have? Surprisingly, the RTX 2060 still only has 6GB of memory like the upper-end version of its immediate predecessor, the GTX 1060 (albeit of the faster GDDR6 kind as opposed to the GTX 1060's slower but still quite nippy GDDR5X memory), but its GPU actually has a slower base clock speed of just 1365MHz, with a boost clock speed of 1680MHz. Or at least the Founders Edition does, anyway. Other manufacturers may well tweak this slightly to squeeze a few extra ounces of performance from them. By way of comparison, the reference specification for Nvidia's 6GB GTX 1060 has a base clock speed of 1506MHz and a boost clock speed of 1708MHz.

However, its in the memory department where the RTX 2060 really shines, as that 6GB of GDDR6 memory not only has a speed of 14Gbps, but its bandwidth goes all the way up to a whopping 336GB/s. The GTX 1060, on the other hand, maxes out at 8Gbps and 192GB/s respectively. 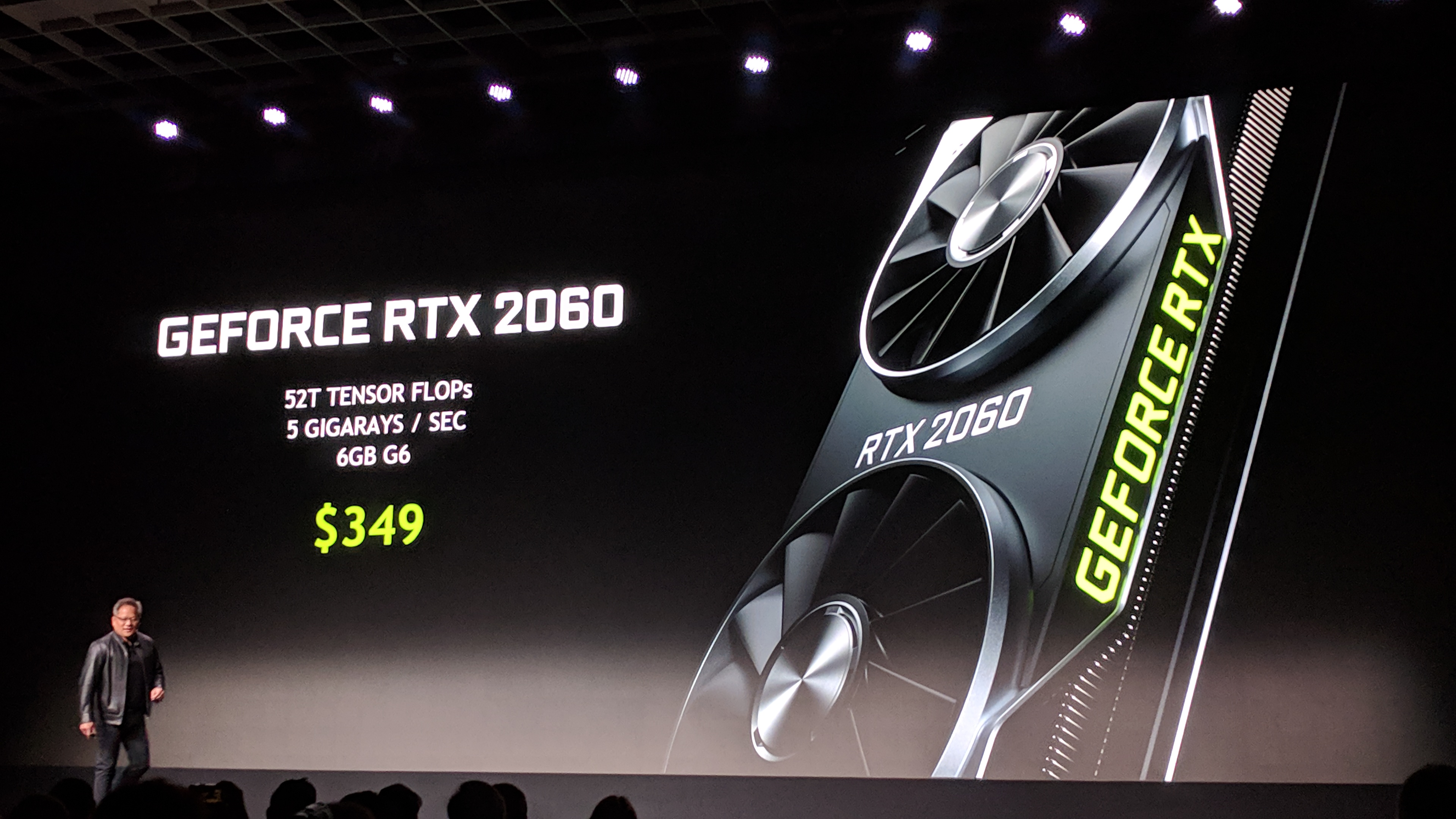 It doesn't seem massively power-hungry either, judging by Nvidia's official Founders Edition specifications, as they only recommended a standard 500W power supply with an 8-pin connector to cope with its 160W power draw.

Hang on a sec, what's so special about RTX again?

Glad you asked. In case you've forgotten, Nvidia's new RTX cards are packed with lots of new fancy bits of technology that help make everything look a lot more life-like than before. You can read more about all of Turing's best features here, but the long and short of it is that its titular 'ray tracing' technology essentially allows each RTX graphics card to simulate the way light works in real life, producing more accurate reflections, soft shadows, facial animations as well as more realistic lighting effects when bits of scenery get blown to pieces and suddenly you've got the sun streaming in a previously rather dark room.

There's also DLSS, or deep learning super sampling, which uses Nvidia's AI know-how to help boost performance, and the RTX 2060 can do all that just like the rest of the RTX family.

The most exciting thing about the RTX 2060, however, is that it can do DLSS at 1440p. Not 4K. 1440p. That's the one thing I wanted from the rest of the RTX family when I tested Final Fantasy XV's DLSS performance, which is limited to just 4K resolutions at the moment. That's fantastic news - or at least it is if you play Battlefield V, which is the only demo I've seen so far with DLSS and ray tracing running simultaneously at 1440p. It's not yet clear whether FFXV will get 1440p support for DLSS as well, but for me, it's definitely a step in the right direction.

Moreover, that same Battlefield V demo with both DLSS and ray-tracing enabled saw the game's performance soar back up to non-RTX levels. That's just over 60fps, according to Nvidia's figures using an Intel Core i9-7900X, 16GB of RAM on High with the RT settings on Medium, which is pretty impressive. With just ray tracing enabled, that figure dipped to somewhere around 50fps. Add in DLSS, however, and you're back up at 60fps.

Now, it's worth bearing in mind that DLSS is still a per-game affair, as Nvidia have to train their fancy pants AI gubbins in order to render said games at such speeds. It therefore remains quite a niche thing until more games start getting support for it - which at the moment, is pretty much nothing aside from Final Fantasy XV (although there is a whole big list of confirmed DLSS games that will, at some point, look super pretty-like).

Still, even if you disregard the DLSS / RTX magic for now, the RTX 2060's raw performance certainly sounds pretty impressive - and will likely blow AMD's Radeon RX 590 completely out of the water, too. I'll have to wait until I've tested one myself to see if Nvidia's GXT 1070Ti-beating claim holds true - the rather ambiguous graph they showed indicated at least equal performance, if not a teensy bit faster on certain, completely unknown titles - but I should hopefully be able to give you my final verdict early next week once I'm home from CES.

All RTX 2060 purchases will bag you a free copy of either Bioware’s upcoming RPG Destiny-alike Anthem (which will also have DLSS support at some point in the hopefully not too distant future, Nvidia announced this evening), or Battlefield V.

The same deal will also apply to the RTX 2070, while RTX 2080 and RTX 2080Ti buyers will get both games for absolutely nothing.