If you click on a link and make a purchase we may receive a small commission. Read our editorial policy.
Overthinking Games runs every other Monday, and is an opportunity for Malindy Hetfeld to take something about a game and think about it too much. To kick off, it's the boys of Final Fantasy XV and their good, good food.

For the sake of snappy videogame design, eating is often the first thing that falls by the wayside. After all, food and all the associated processes take time, time that in most games is better spent elsewhere. Just like in real life, having to hunt around for food in the middle of an adventure often tampers with the pacing.

There are exceptions, but food prep tends to either take up a large portion of a game, the way it does in Battle Chef Brigade or VA-11 HALL-A, or none at all. You hunt down weapon parts or shoot animals to turn them into fashion, but food somehow hasn’t become a side activity of equal value. Food intake is often reduced to drinking; downing a quick potion has been established as an acceptable shorthand for eating something to regain health. As an alternative, some games use snack items such as granola bars and assorted sweets. This choice is of course also down to animation speed – if you want to give players a way to heal through food without slowing down the action during a fight, you can’t have them sit down to enjoy a leisurely slow cooked stew. But Final Fantasy XV represents an important peak in videogame design: an actual roast.

Food is an extremely important part of FFXV's boy band road trip, in the same way that it's important in our real lives. FFXV's presentation of food is so good, in fact, that it encourages you to experiment and explore in real life. In the game you’re strongly encouraged, especially in the early parts to stop driving for the night and put your tent up at a haven or visit a motel. At this point in time you could simply catch some zeds and skip to the next day. Instead, it's presented as the perfect opportunity for some food.

On one level, the meals can be essential for the stat boosts they give you. Purchasing new armour and weapons can only get you so far, so particularly before a main mission, meals shouldn’t be skipped. So far, so potion. But FFXV implies that what actually gives you the energy and strength represented by the stat buffs are varied, nutritious meals. That notion even extends to Square Enix's partnership with Nissin Cup Noodles. While it’s difficult to sell anyone cup ramen as a nutritious meal, building a whole side mission about adding fresh ingredients keeps the sponsorship deal alive and eradicates any notion that joy can’t be found in fast food, too.

Because, importantly, FFXV also acknowledges the sheer happiness that good food can bring.

This starts with the way Ignis discovers food. His cry of “That’s it! I’ve come up with a new recipe!” is not only a catchphrase his voice actor Adam Croasdell is never going to live down, it’s also emblematic of the fun of cooking. In FFXV, the food changes region to region. You're encouraged to explore. If you’re someone who already cooks a lot, you may know the feeling of eating something very good on holiday and having the immediate desire to recreate it at home. FFXV shows you how much fun that is! Ignis picks up inspiration from every restaurant you visit, using it to create his own unique versions of the original dishes. The number of possible meals is staggering: it takes 20 minutes to watch a compilation of every dish in Final Fantasy XV.

The satisfaction of Ignis coming up with another dish spurs you to pick up plants on the road and buy random ingredients at shops. This, too, is a great approximation of what cooking can be like -– at first you only have some random ingredients that don’t look like much, but together, and with a bit of creativity, there's always a surprising end result to look forward to. What an end result, too! Steaming risotto heaped on a pristine plate; a cutlet fried in a breaded coating so crisp you can feel the crunch through the screen; a perfect fried egg glistening over a slice of toast... This is, of course, in many ways exaggerated for a camping setup, but Noctis is a prince, and as such he isn’t going to eat baked beans or spaghetti from a can (although baked beans or spaghetti from a can are often joyful themselves). 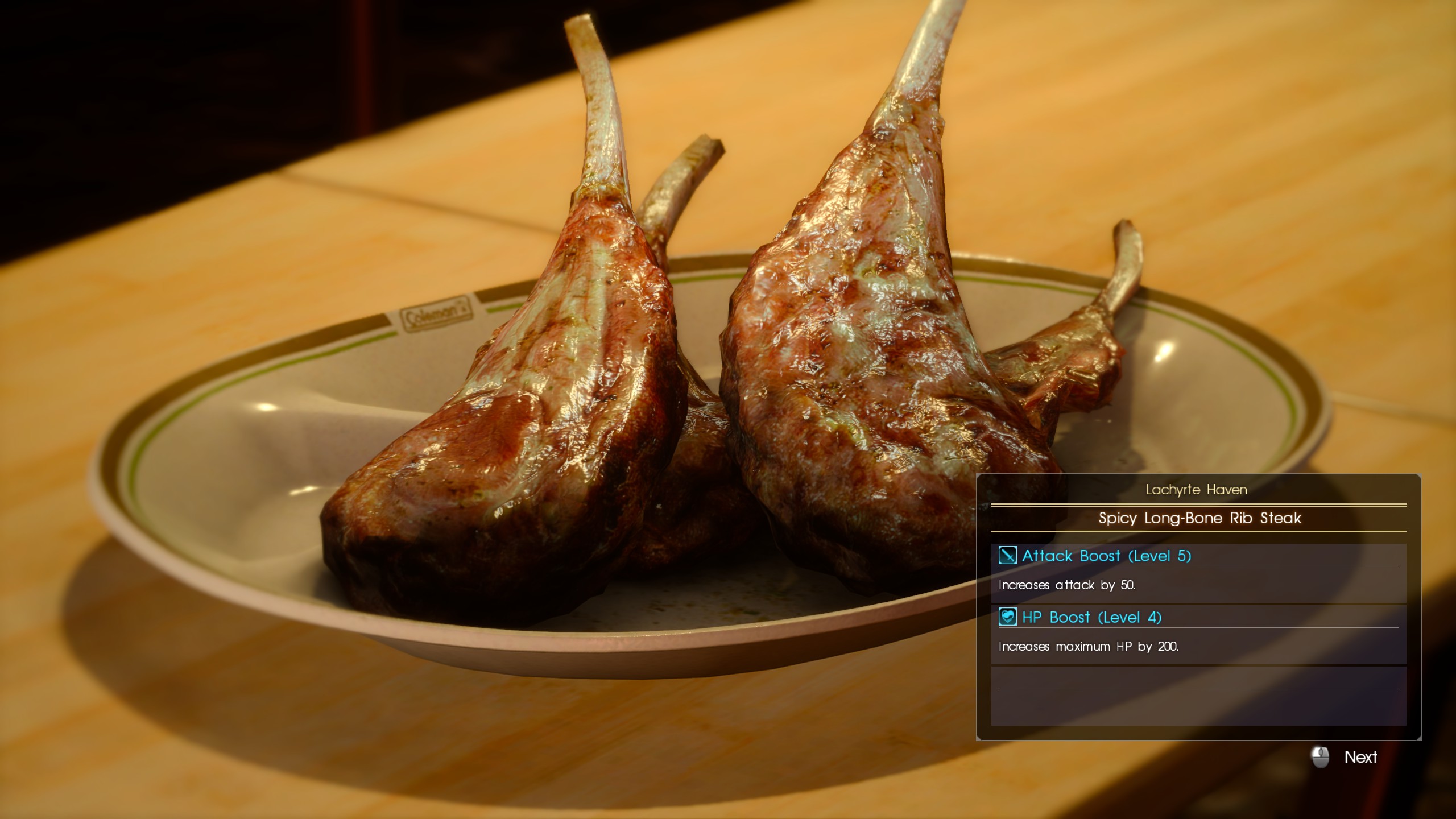 It’s not surprising that a Japanese game places such importance on food porn. Food takes the centre stage in almost all of Japanese media, from TV dramas to talk shows and news broadcasts. People are encouraged to try local cuisine or visit restaurants, while chefs are invited to offer up the unique selling points of their food. The shot of the food in FFXV is taken right from such broadcasts, where often a spoon or a pair of chopsticks will scoop up a bite for a mouth-watering closeup. Designers at Square Enix studied food to the point of cooking and photographing the dishes to create the final model in game.

Part of the attraction is that in FFXV eating is a communal activity. Rather than just a means for the protagonist to stuff down a health boost on the go, the meals here are savoured around a camp fire as four friends talk -- about their journey, about what they've found that day, and about the food.

By comparison, cooking shows like Hell’s Kitchen and even The Great British Bake Off are more about showmanship than about food. Shows without competition, that focus on good cooking done by normal people instead of trained Jamies and Nigellas, are a relatively recent thing, and so it will take a while until a similar approach to food as Japan’s can spread in Western countries and games.

It’s no wonder that FFXV spawned a free, fan-created cookbook. Other games, like Minecraft or WoW, have inspired official cookbooks, but Final Fantasy XV’s connection to food, both in the game's world and beyond, seems more true to the genuine love of food. Why not pick a recipe and fall in love yourself?