You’d not think that a dude who calls himself “Doomfist” would be a particularly complex personality, but returning to Overwatch for the first time since Blizzard started adding new heroes to its team shooter, I found him the hardest to understand. That's no bad thing. It's a pleasure to return to a game and find new characters who aren't simply the Ken to an existing Ryu. Overwatch's new characters add a variety of playstyles, and have made the game more interesting and challenging. Despite the challenge of all this new variety, it might even have become a friendlier place to spend time since I last played.

Let's get back to Doomfist. As the name suggests, he's a melee specialist, and he’s really into punching. Like, really into it. In addition to his basic melee attack (a punch), he’s also got three special punches: an uppercut that launches him into the air, a leaping slam that has him whack the ground in front of him, and a rocket-assisted haymaker that throws him forward fast enough to stun anyone unfortunate enough to stand in the way. Even his sole ranged attack is kind of a punch — press the left mouse button and he clenches his fist and shoots buckshot out of his knuckles.

It sounds simple — punch enemies, enemies get hurt, team wins, yay — but I quickly discovered that successful Doomfist play requires dextrous management of these abilities. He can chain his slams, jumps, and punches together to create some staggering combos, allowing him to pin enemies in place before burning them down with high-damage attacks. At least, I’m reliably assured he can, but apparently only in the hands of other people — I can’t make him work at all. 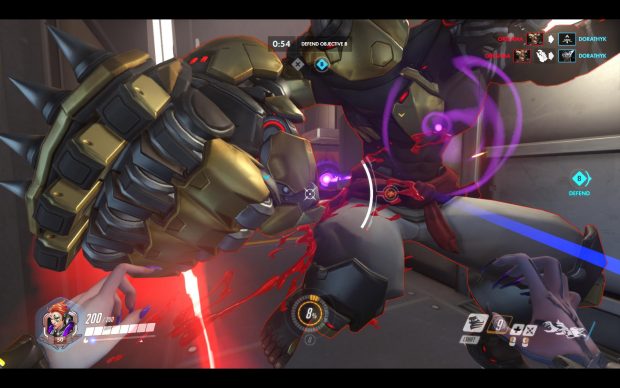 I tried leaping forward into the fray and following up with a rocket punch, but my initial hop left me so disoriented that I never managed to connect with my follow-up fist. I tried uppercutting first instead, intentionally whiffing on a target in order to gain the height advantage and more accurately aim my slam, but instead I just ended up stuck in the middle of combat without a viable escape route.

Doomfist is not a hero for me, I decided after my fourth failure of a game with him, but I am convinced that his inclusion is a positive for the future of Overwatch. Blizzard could have just amalgamated existing heroes, but instead, they’ve been comfortable introducing distinctly different play styles into an established battlefield. Doomfist specifically feels like a fighting game character, dependent on combos and careful positioning. Even his special attacks make him feel like a first-person version of Street Fighter’s Ryu, able to shoryuken his way into the air and control space with his hadouken-esque rocket punch.

Brigitte, Blizzard’s newest playable hero, is another weird one. She’s got a shield like Reinhardt, so I started playing her as a frontline tank, waddling right to the front of firefights. That didn’t work, though: I was getting focused down too fast, and my shield barely covered my own body — it certainly didn’t provide defense for my team.

Instead I tried to learn a lesson from Blizzard themselves. Overwatch classifies Brigitte as a support hero, putting her alongside dedicated healers like Mercy and Lucio, so I started to prioritise topping up my teammates’ health with armour packs over absorbing incoming fire. Her shield isn’t tough enough to tank for an entire team, but it does give her an easy survivability that flimsy support heroes like Zenyatta are sorely lacking, and it also comes with a handy bash ability: perfect for stopping Tracers or Reapers sniffing around your team’s rear end. 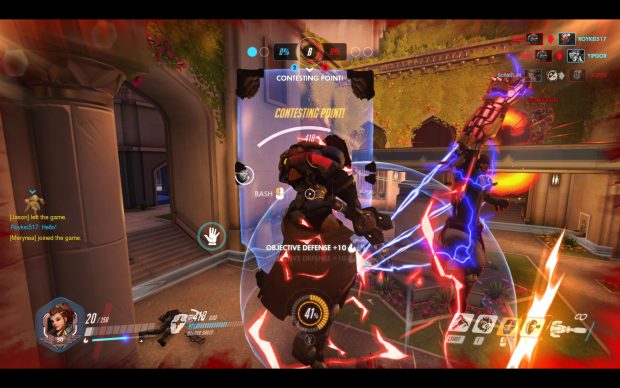 Sombra’s similarly different to most of the existing lineup. She’s definitely from the Tracer school of speedy irritants, and is designed to skirt the enemy team’s backline, but has less maneuverability than the chirpy Brit. Instead, she’s got the ability to turn invisible, allowing her to ghost behind opponents and either tear at their health bar with her submachine gun or disable their own skills for a short time with her hacking powers. Like Doomfist, she can be tricky to use for new players — she’s a scalpel, rather than a hammer — but her teleport beacon is an easy way for Sombras who have overextended to yank themselves back out of trouble.

Now’s a good time to be playing her, too. Blizzard’s latest round of regular updates buffed Sombra, who some players felt was a bit toothless on her initial introduction. The developers have been reasonably quick to address disparities between heroes so far: as well as buffing Sombra, they’ve also nerfed Mercy and played with Doomfist’s ranged damage potential in the last few months alone.

These changes are in part driven by Overwatch’s thriving professional scene, which is managed by Blizzard and populated by teams from London, Boston, Seoul, and other cities. The matches between these squads are now neatly slotted into Overwatch itself, with an in-game menu making them easy to track and watch, and a dedicated store allowing lowly amateurs to show their allegiance with skins bought for real money. 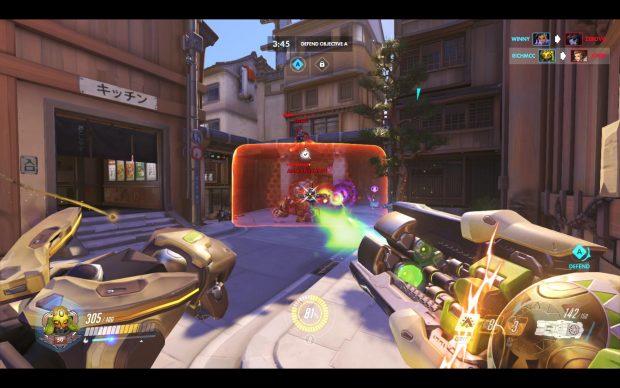 It took Blizzard time to warm up to the idea of introducing totally different play styles. Orisa — the first new character introduced after Overwatch’s launch — cribs most of her abilities from other heroes, albeit with minor tweaks. She’s got Reinhardt’s barrier (except she can place it on the ground), she’s got D.Va’s fast-firing primary weapon (except it’s better at range and not quite as devastating up close), and she’s even got a pocket version of Zarya’s gravitational ultimate (except she can use it much more frequently).

Fortunately recycling those ideas makes for a solid hero. Orisa quickly became my favourite tank, being tough enough to take into the middle of any fight, while also being able to dish out the kind of ranged damage that fellow bruisers Reinhardt and Winston can’t. Her ultimate — a drum-like object that can be plopped down to boost team damage — is consistently useful, too, meaning that its deployment at a less-than-ideal time likely won’t get you into trouble with any arsey teammates.

And you will have some arsey teammates. That’s especially true in competitive mode, where players are ranked on their success, and people are quick to blame failure on others. I’m playing on the Asia servers, where English is rivalled by Korean as the most-spoken language. That has insulated me slightly from some of the worst of the toxicity, but I’ve picked up enough of the language now to know when someone is ragging on someone on their own side in Hangul, and it’s still fairly often.

Toxicity is something of a fundamental issue with a game like Overwatch, where small and specialised squads mean that one bad apple can so effectively scupper a team’s chances. It does feel better than when I first played, though, and less like I’m stepping in to be tarred and feathered every time I play. It’s not clear how much of that is due to players shifting to new modes — or even to different games entirely — and how much is down to Blizzard’s own efforts to reduce toxicity. 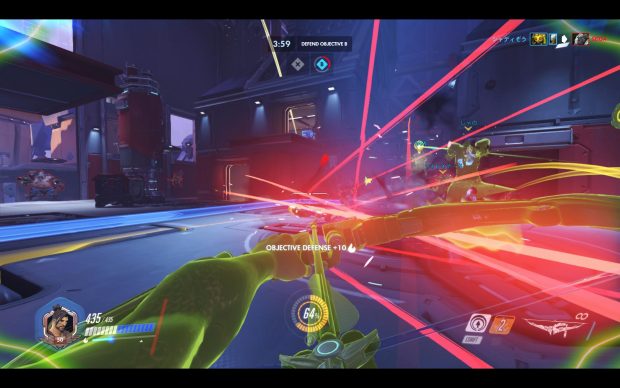 The company have acknowledged that there is a problem with the attitude of the community and appears to be making efforts to solve it, but it’s taken some time to incorporate elements that are already common in similar asymmetrical team games like League of Legends. The developer is only now testing an “avoid as teammate” option, for example, after an earlier “avoid this player” option was exploited by some nefarious Overwatchers who wanted to duck more skilled opponents.

The new characters help, though. None of them feel as potentially useless or selfish as heroes like Widowmaker or Reaper, both of whom became infamous as automatic picks for players who emphasised personal glory over team contribution. Ana, as a sniper, is perhaps the closest, but even her rifle can be used to heal her teammates fairly easily. Certainly, nothing has replaced “Hanzo main” as the insult of choice for the preteen Overwatch player.

And with the unranked quick play mode still hugely active and regularly updated, it doesn’t feel too daunting a task to go in and try to learn these new heroes. I can’t get a grip on Doomfist, but I love Orisa, and I think I might even be quite good with witchy healer Moira. More characters and better balance means that there’s more for everyone in Overwatch than there was at launch, even if the continued presence of some nasty types means it’s not yet the perfect play area.