Overwatch, the multiplayer shooter all the cool kids (and their pets) are playing, is having another free weekend. That means you can play for free from 7pm GMT on Friday through to 8pm on Monday. Weekends have a very liberal definition nowadays - what's the world coming to, eh?

Well, this is awkward. We're four lines in and I've already told you all the news. Luckily, I've got some thoughts on the revised capture the flag (CTF) mode that landed with the Lunar New Year event.

It's better now! While CTF will never replace Escort as my favourite game mode, Blizzard have made some changes since their last attempt that have turned the mode from a so-so curiosity into something that I'd welcome into the regular playlist. For now, it appears as its own thing in the arcade - both in a casual form that only loads up the new map for it, and in a competitive mode featuring both that one and all the previous CTF maps. Here are the tweaks:

“Flag pickup is now instant, but flags cannot be picked up for five seconds after being dropped. Flags return after 4 seconds, and flag return is not interrupted by taking damage. Mobility and invulnerability skills drop the flag and, music plays while carrying the flag! Sudden death will now break ties at the end of a match. When time runs out, the round starts over, the flags are moved closer to the center of the map, and the first team to capture wins. All these changes will be applied to older Capture the Flag maps as well.” 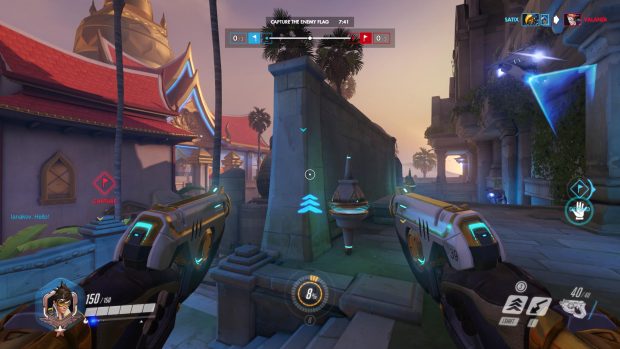 The presence of that competitive mode shows Blizzard's confidence that CTF is ready to stand on its own two flags, and from the matches I played this morning I don't think that confidence is misplaced. Now that you can instantly pick up the flag, it's easier to get it out of your opponent's base - though because some abilities now make you drop the flag, it's harder to run it all the way back. The combined effect of those changes make for much more interesting, dynamic fights that don't just boil down to both teams endlessly bashing their heads against each other's defences.

The sudden death mode is a great addition, where both team's flags are placed in vulnerable positions only a stone's throw away from each other. I've only had one match go to a tie so far - another sign that the mode's been improved - which is almost a shame, because I love how frantic and dangerous the shrunken playing field feels. I'd happily play a game where the flags were so close for the whole match, so I wouldn't be surprised if that appears as its own arcade mode at some point in the future. 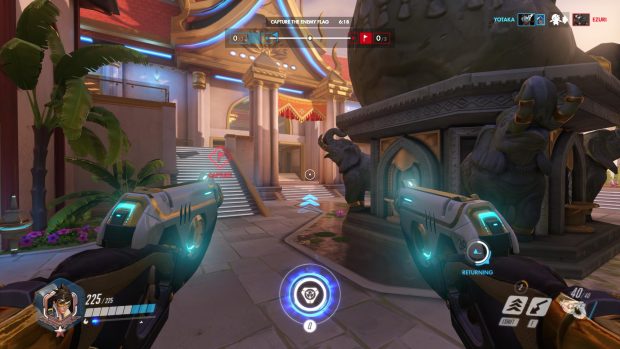 The new map feels particularly strong, which makes sense as it's been built specifically for CTF. I'm a big fan of techno-temples, and the drones that hover around scanning the ruins of Ayutthaya are an excellent touch. That neat aesthetic would count for nought if it wasn't also a well-designed area for shooting and flag-gathering, and it succeeds on that count too. It's small, which means clashes happen more often, but Blizzard have packed that space with multiple routes that allow each base to be attacked front on, from above or from below. It can still be difficult to nick a flag without a coordinated team, and stalemates still happen - but they're rarer than on other maps, and rarer in general now that the flag's easier to pick up.

There are moments where specific hero abilities shine in ways that they don't on other modes. A well placed ice wall from a Mei can cut off the flag bearer's pursuers, and a well timed deflect from Genji can distract a turret long enough for the flag to be nabbed. Every hero feels viable, and with the possible exception of Torbjorn no hero seems vital either. 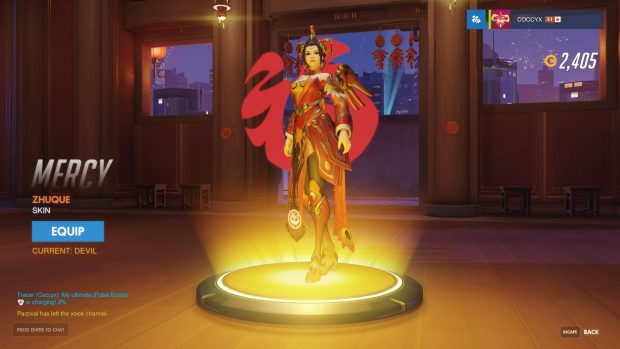 With all that said, it's still not perfect. Once one team gains the lead, if they play sensibly they can focus on maintaining a solid defence - which can slow the game down to a crawl, much like on many of the Assault maps (I'm looking at you, Temple of Anubis.) That's much less of a problem than it used to be though, and doesn't stop me being glad to have a whole new way to play Overwatch.