Popular Overwatch livestreamer and ex-Dallas Fuel professional player Félix ‘xQc’ Lengyel was handed a 15-day suspension from Overwatch yesterday, after being repeatedly reported for abusive chat. This is only the latest in a long line of disciplinary actions taken against the player, who is scheduled to appear for team Canada in the Overwatch World Cup next month.

xQc is famously loud and abrasive – and his style is extremely popular. Loading up his broadcast from yesterday gives a good indication of his tone – skipping randomly through, the first three things I heard were the r-slur; him telling an enemy (albeit one who could not hear him) to “get the fuck out of my face, bitch,” and him calling the game “fucking cancer.” He also had tens of thousands of viewers, with the chat constantly churning.

Since being dropped from the Dallas Fuel after repeated conduct infractions, xQc has nominally been on a road of self-improvement. In his streams, he tends to keep his outbursts between himself and his viewers, rather than saying them in the in-game voice chat, though Blizzard has said that they will now take into account conduct from other sources where it may still impinge on others’ experiences.

After this suspension, he took to Twitter, claiming that “it is never my intention to harass or use in-game chat in an abusive manner,” and called his conduct “banter.” “100% of the time I type something to someone I know they are playing along and won’t be hurt,” he said, before following up with the classic if-you-were-offended non-apology: “If I ever typed something and you we’re [sic] genuinely hurt, I am sorry.” (Notably, this would be an unnecessary sentence if he really was sure that his targets were playing along 100% of the time.) 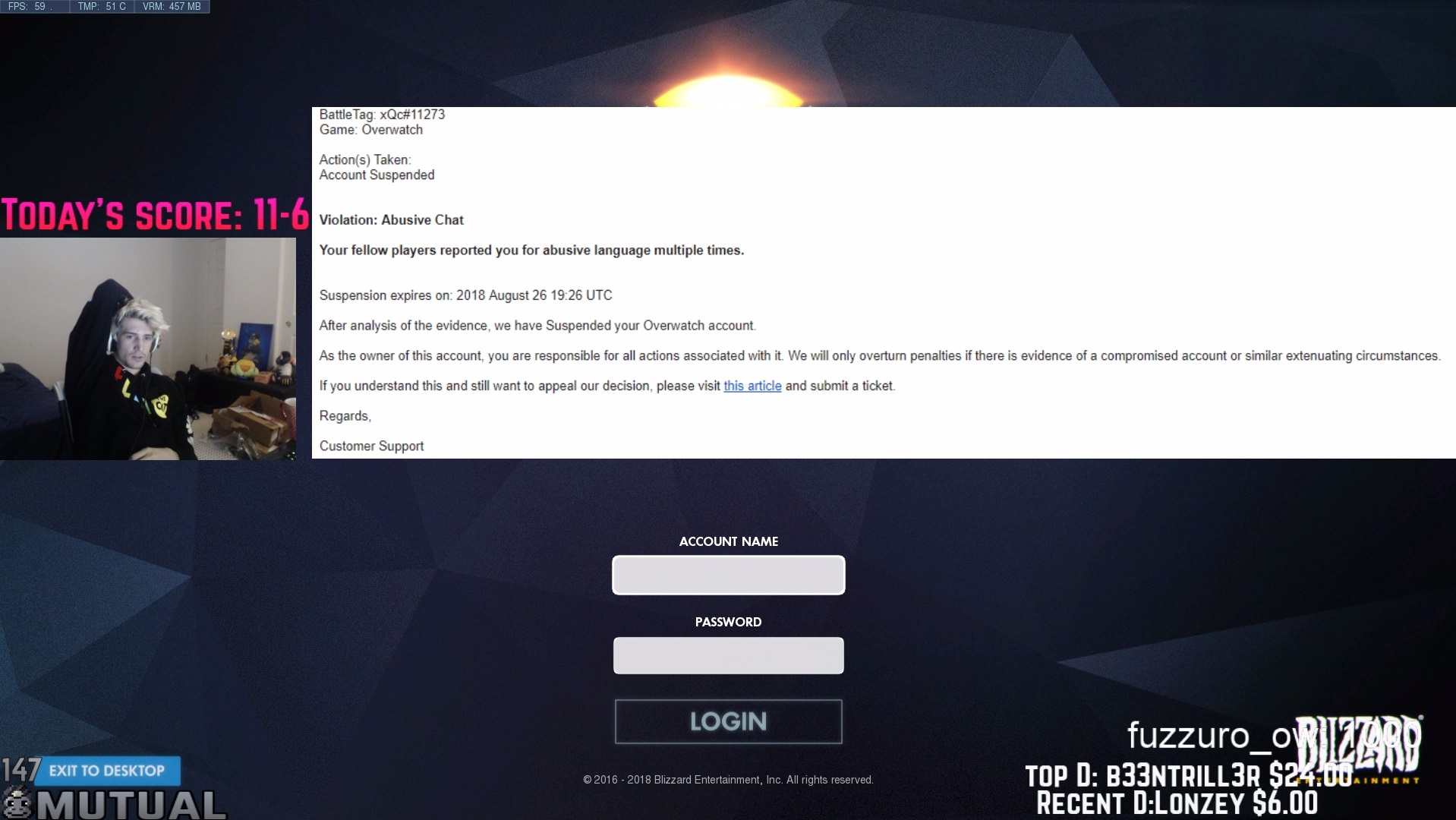 What exactly this suspension was for is unclear, as Blizzard’s reporting system is notoriously opaque. On his stream, xQc showed the email he received, which reads in part: “your fellow players reported you for abusive language multiple times…after analysis of the evidence, we have suspended your Overwatch account.” This suggests that those reports may have been received prior to the day he was banned, to allow time for Blizzard’s review.

When xQc was previously reprimanded for spamming a Twitch emote in what Blizzard referred to as "a racially disparaging manner" while black caster Malik Forté was on screen, Blizzard claimed that "it is unacceptable for members of the Overwatch League to use or distribute hateful, racist, or discriminatory speech or memes." But actions speak louder than words, and though it led to the end of his Fuel career, he was still signed on for the World Cup. For their part, Team Canada’s head coach, Justin "Jayne" Conroy reacted to this latest suspension by saying that “there will not be any internal changes or roster adjustments at this time.”

The problem is that, if Blizzard continue to let him play, they send the message that abusive chat is no big deal. As with when he made homophobic comments towards the only openly LGBTQ+ Overwatch League player, Austin "Muma" Wilmot, as with when he spammed those emotes, as with when he was suspended last year for throwing a competitive game, after a couple of weeks, xQc is allowed to brush himself off and continue to participate in official tournaments. This undermines Blizzard's stated commitment to inclusivity, as I wrote about on Eurogamer recently. It’s not that xQc should be banned for life; he ought to be able to grow and change and return when he’s ready. But that’s not while he’s openly admitting to calling people “fucking [r-slur]s" on his stream; not while he doesn’t see how that’s an issue.

With competitive Overwatch constantly struggling with bad behaviour from players and casters, it’s clear that the disciplinary actions taken aren’t particularly effective as deterrents. And as this behaviour continues at the top, so too does it make some regular players think it’s acceptable, both in-game and elsewhere. Whether or not this is the straw that breaks the camel’s back for xQc’s place in the Overwatch World Cup will say a lot about Blizzard’s commitment to improving that.