This is Playstyle Royale, where I head into a battle royale game and try to win my chicken dinner while adhering to arbitrary rules. This time's a bit different, because I'm more interested in becoming a chicken than winning one.

I'm playing Realm Royale, the battle royale spin off to Hi-Rez's Paladins. One of its best ideas is that when you run out of health, instead of dying you get to run around as a defenceless chicken: survive for 30 seconds, and you're reincarnated in human form. I'm going to get myself poultry-fied three times, then win a game. That is definitely absolutely what is going to happen.

As usual, I get five attempts. Let's jump straight in.

There are five classes in the game, but I always pick the Mage. Her toolkit includes some of my favourite abilities, including one that turns her into an invulnerable block of ice while topping up her health, but those are just an added bonus on top of her movement skill. The others can jump, roll and teleport - but only the Mage can fly. It's a degree of freedom I'm not used to having, and not one I can bring myself to give up by choosing another class. 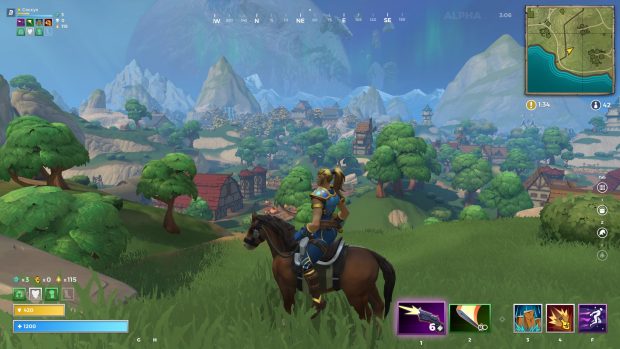 Not that it matters for my first game. I plummet down into a town that's just beneath the zeppelin's flight path, keen to get my chickenings in early. I run into a house in time to see someone grab a sword, which is perfect. It's time to introduce my greatest ally: windows. They're big enough for chickens, but not for humans - pretty much the sole reason I reckon I've got a shot at this challenge.

Two sword swings are enough to rid me of my human form, and I make a majestic leap for the window... only to bounce off it. I leap at it twice more, before realising there’s a mountain behind it and the gap isn't big enough to fit even my poultry form. One more sword hit sees me burst into a cloud of feathers.

My second game goes a little better. I head over to a forge, where I know trouble will come to me. Forges are spots where you can craft special armour, abilities and weapons. I stand in a room with a window, and it doesn't take long before someone appears and tries to off me. All I do is waddle back and forth and fire a few shots back to keep my assailant on his toes, but it takes him an embarrassingly long time to put me down. I cackle as I leap out of the window, then leap back through a window on the ground floor. I've read that staying still stops you making any noise, although I can still hear clucking - but it seems to work. He eventually spots me as he wanders past, but I hop back through the window and respawn.

I then immediately die again, because I've only been resurrected with a sliver of health and I'm caught out in the open. 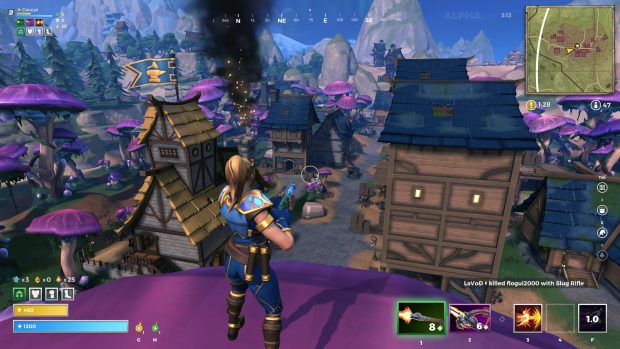 I then immediately die again again, because I'm silly enough to think the same thing will work in the next game. I drop down into some ruins along with four other people, and get demolished as I run from building to building.

I change up my tactics, and plummet down into a mushroom forest at the start of my next game. I snag myself a long range rife, then fly up to a mushroom and see if I can bait anyone into a duel, confident that anyone who chickens me won't be able to finish me off. I spot someone, and the plan works perfectly. I'm the smuggest quivering chick the realm has ever seen.

Or at least I am until I pop back into my human shoes just as my assailant appears on the ridge behind me. I'm on next to no health again, so I choose to flee rather than fight. He shoots me down, and I briefly think I've lost him when I duck behind a tree as a chicken - but a gunshot shatters that illusion, as well as my body. I spectate for a minute, and see him get chickened in turn by someone else. I'm disgusted at the way he just sits still and lets himself get polished off. 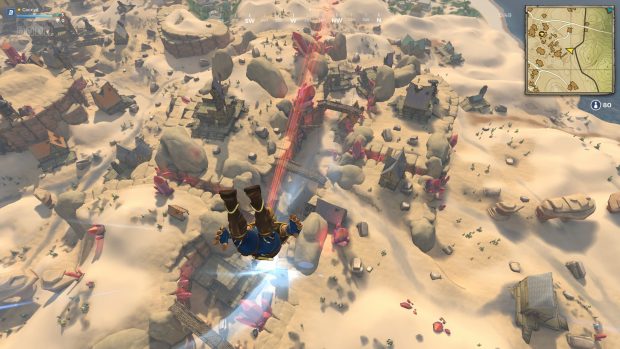 Following my brief success with that toadstool, I decide to stick with a similar strategy. I drop down into the gulchy part of Goblin Gulch, where buildings line the bottom of a chasm. I loot some of the buildings on the cliffs above, then turn my attention below. I spot someone hanging out near the forge, so I fire a few shots at him with my poison pistol. They fail to land, but they succeed in getting his attention. I really do like how you can always find some action near a forge. 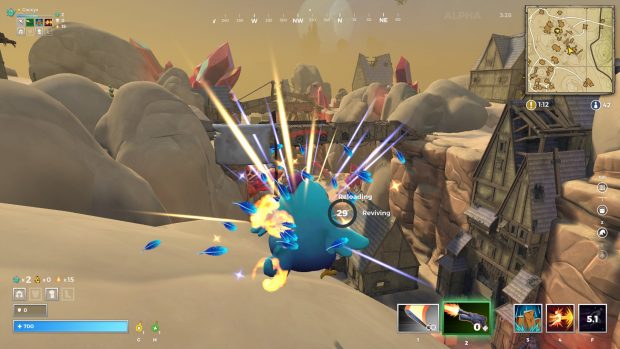 I let him land the three rifle shoots he needs, then cluck my way off the bridge I'd been standing on. I return to human form, then do exactly the same thing again.

I resurrect once more, and decide to back off rather than try my luck a third time. It's still early in the round, and you can only come back three times in each game. I figure my best bet is to save that last second chance in case I actually need it.

I head off towards the town proper, and pick up a pursuer along the way. He chases me into a house, but I've had enough of running. I lob down a firebomb as he walks through the door, then bring him down with a couple of crossbow bolts. He's an impressively nimble hen (or I'm an impressively poor shot), but when I fling another firebomb his goose is cooked. Ok, not his goose - but I've gotten bored with writing the c-word.

I pinch his legendary breastplate, and deconstruct the rest of his stuff until I've hit the maximum amount of shards. I stroll on over to an unoccupied forge, and use them to craft some more legendary armour and an ability. I exchange some potshots with someone half a valley away, but again decide against letting myself in for the final chickening. There are 20 people left, and the moment I collect my stuff half of them seem to appear right next to me. 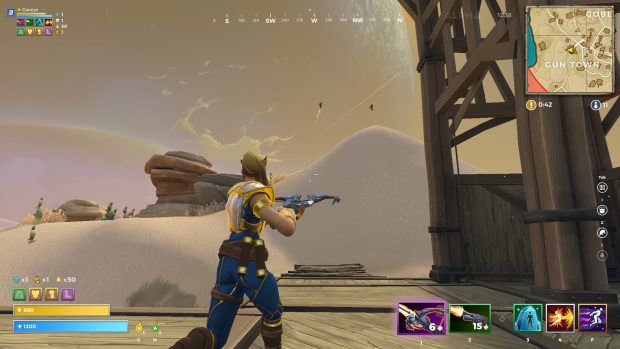 I hear shots from outside, and see a three way battle. Two of the fighters leap into the air at the same time, shooting at each other as they fall like a pair of disgruntled anime characters. I decide to leg it, using my new legendary flying ability that I'm delighted to discover is in the game. 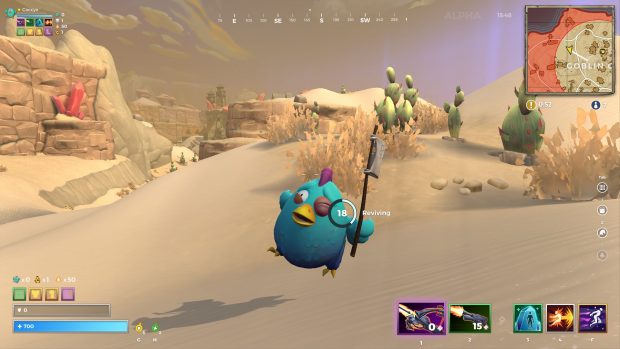 A few minutes go by as I ride off into some sand dunes, until there are only ten people left. With the playspace shrinking, I decide to let myself get killed by the first person I see who looks far enough away. I'm worried that I've let all the easy opportunities pass me by, but my saviour appears and sticks a few slugs in my chest. I grin as I wait out the resurrection timer from the safety of the opposite ridge. Or I do, until my face falls as someone else turns the corner on horseback. I put some distance between me and the Hunter until she spots me, but spot me she does.

With three seconds left on the timer, I watch her pull back her bow... and then my screen is full of feathers. 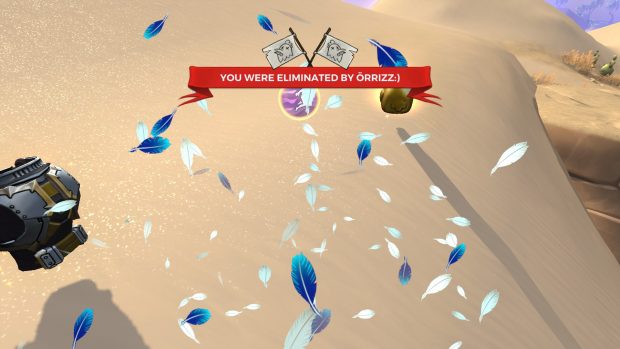 That's it for this week! If you're more interested in winning than japes, then do check out Dave's general Realm Royale guide and his class specific one. Some would say winning is the best jape of all.

Watch this space, because the new Sanhok map just landed in Plunkbat. If you've got any ideas for jungle-based shenanigans, pop them in the comments below.