The most important loot in all battle royale games like Realm Royale are the weapons and armour. Without them, you can't exactly do much to your enemy beyond flailing a small knife around. Obviously this is going to be about as much use as it sounds, what with the amount of weapons that you can find just lying there in chests, waiting to be snagged up. This Realm Royale weapons and armour guide will take you through some of the key things to keep in mind when it comes to rarity and crafting, as well as some notes on the individual weapons themselves.

We've got a fair bit to cover in this article that will go in-depth on more technical stuff. If you still need some more general tips for playing Realm Royale, head on over to our main guide for some pointers on what to do when you're a chicken, why crafting at the forge is fraught with risk, and how to mitigate said risk.

Weapons and armour in Realm Royale work a little differently to that of other battle royale shooters. For starters, the armour is separated into four separate items of clothing to equip, while the variety of gear on offer to eliminate your foes is somewhat unconventional compared to the ultra-realistic world Playerunknown's Battlegrounds. That said, there are some things to go over first that will aid you in finding said items. 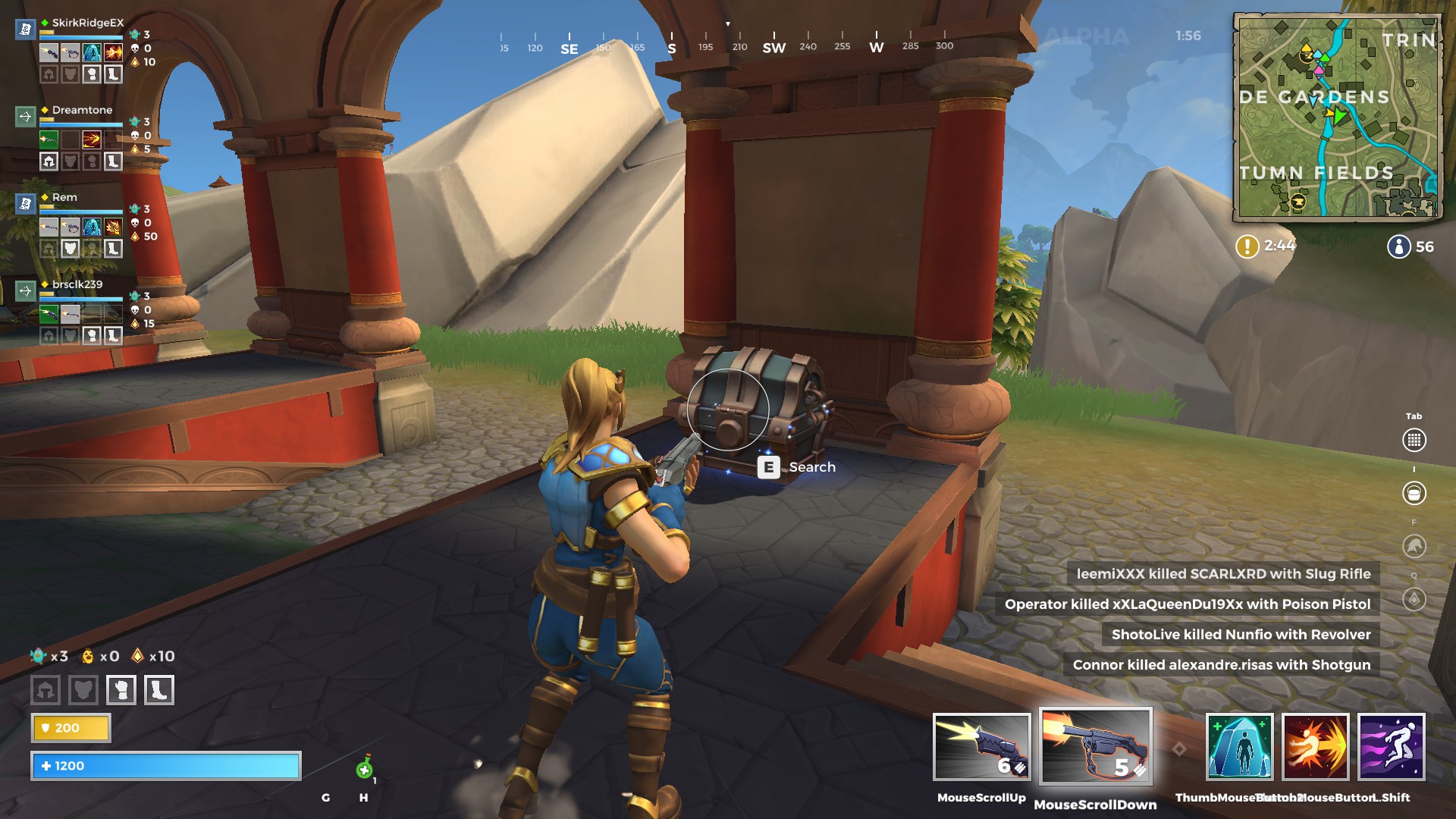 What is in the boxes?

In order to further muddy the process of obtaining loot, boxes in Realm Royale come in three main varieties. The ones that look like fantasy treasure chests have a random assortment of items, usually around two in each one, but it can be as many as three if you're particularly lucky. These contain weapons and armour of any rarity up to epic level gear. On the other hand, health and armour potions can be found in the big square crates. If nothing pops out of that chest, get in close and have a look as there'll usually be a health potion stuck inside. The small rectangular boxes exclusively contain weapons, so should be the ones to go for initially as you drop into the map. 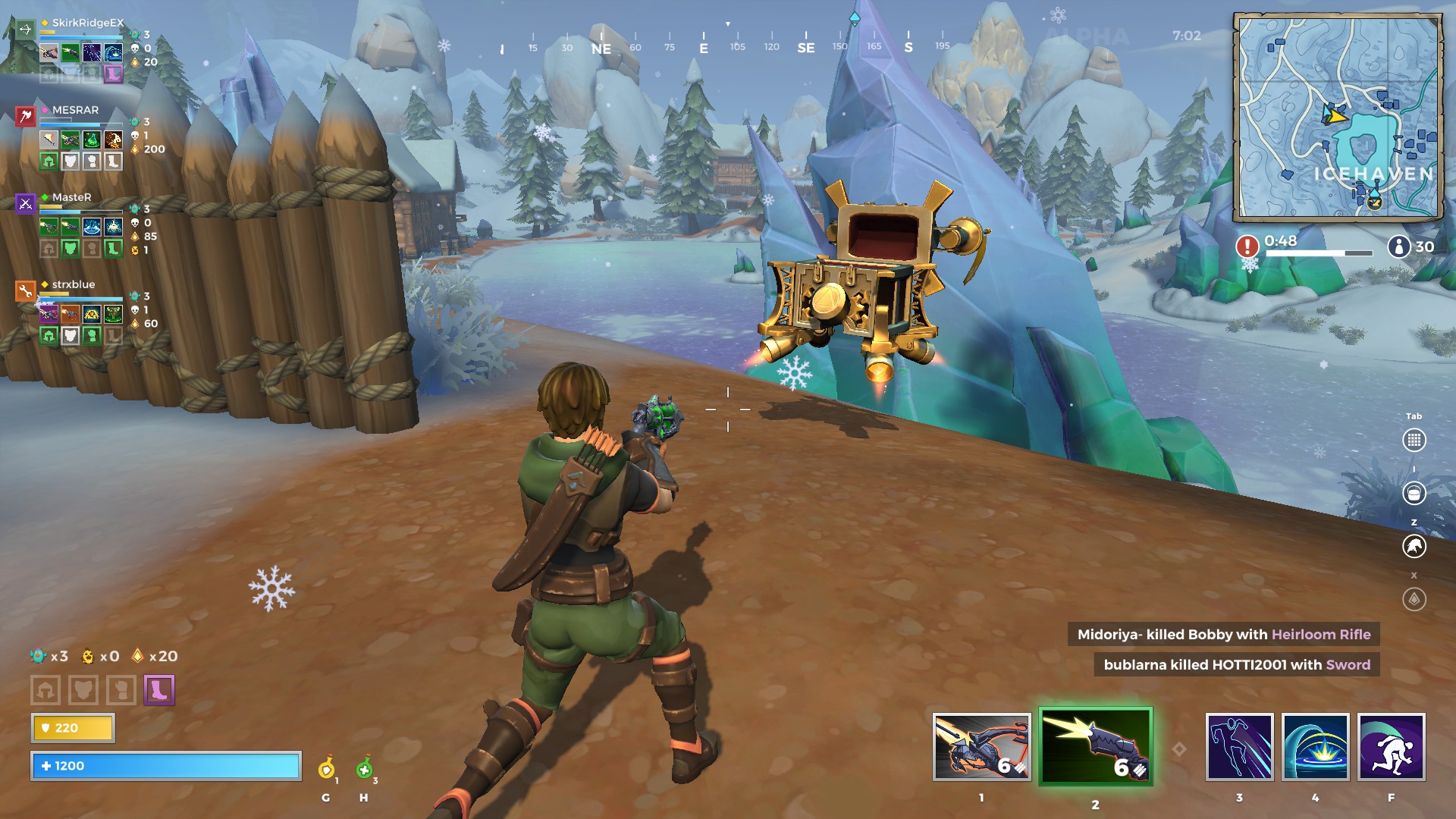 What's in the floating treasure chests?

Occasionally in the map screen you'll see little icons of golden treasure chests: Think of these like air drops in other battle royale titles. What they contain is certainly worth going for if possible, as they tend to contain orange legendary variants of the standard weapons. As a bonus, they'll also indicate where the fog could be when the next circle is drawn on the map. So even if you don't manage to snag that bit of valuable loot, it may be worth hanging around that area to ambush any stragglers.

Colours mean a lot in Realm Royale, none more so than the ones surrounding the loot that you can obtain. Ranging from white, to green, to purple, and finally orange; these indicate an increasing amount of rarity. Rarer items are objectively better as they deal more damage or grant more armour. Skills also come in different rarities, however they have their own sets of bonuses assigned to their rarity upgrades. To find out more about those skill upgrades, go through to our Realm Royale class guide.

You can also opt to disenchant items, which upon doing so give shards to use in crafting at the forge. Common items grant 5 shards, rare ones give 10 shards, epic items disenchant for 15 shards, and legendary gear can be broken down into 30 shards. At times it's generally a good idea, just in case there's an enemy lurking nearby who still doesn't have a decent weapon. 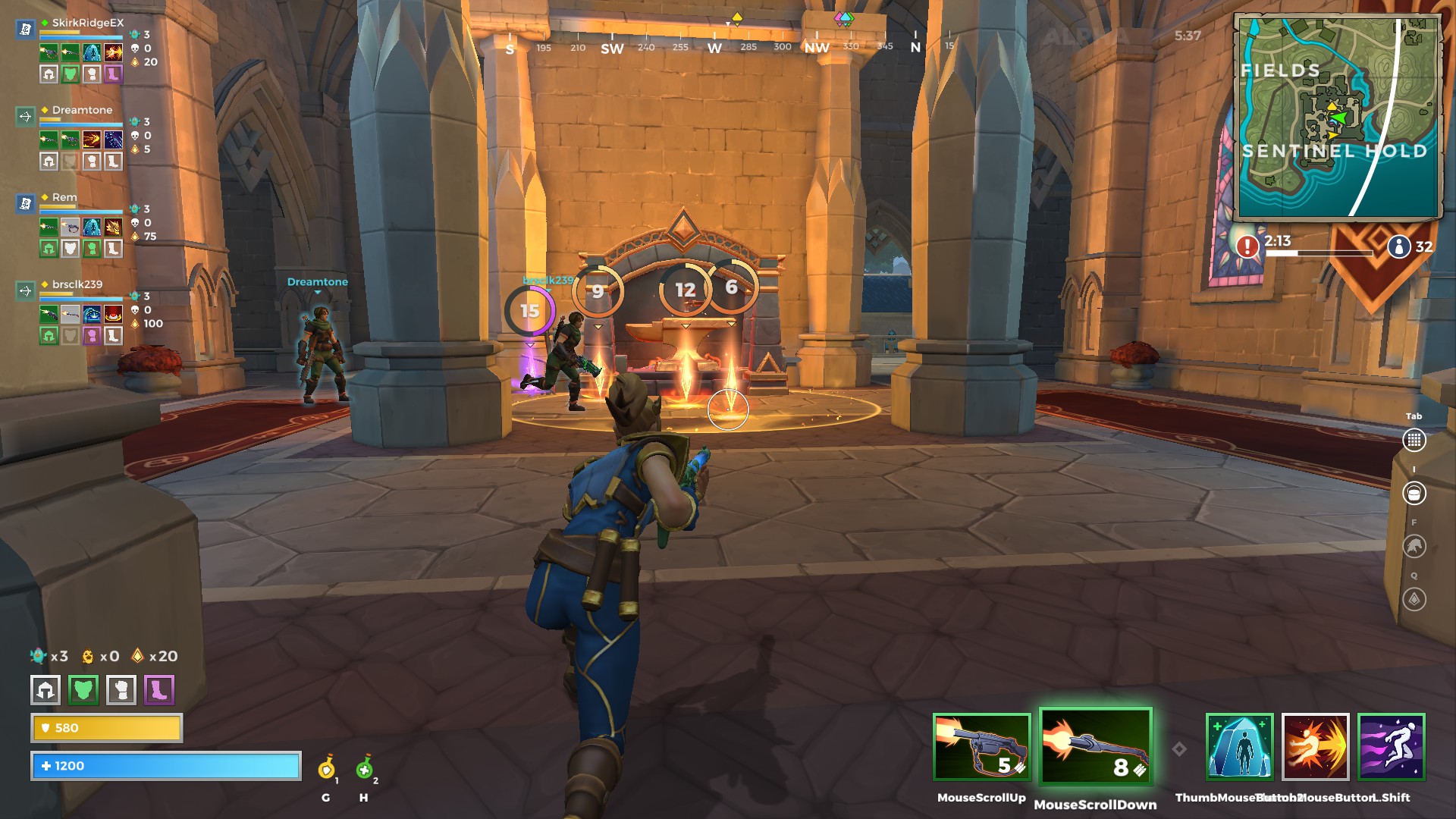 Crafting at the forge

At the forge, you can make potions for a relatively small amount of shards, as well as some legendary gear. Since items take time to craft in the forge, you need to keep a constant eye out for enemies who are attempting to ambush you. As you can only carry a certain amount of shards at any given time - 200 to be exact - it's a good idea to splurge on items with reckless abandon.

There is also a limit to the amount of items you can make at one forge, meaning if you want some legendary gauntlets to go with the legendary helm you just made, you'll need to hoof it to the next nearest forge. Most cost shards which can be obtained by disenchanting items, but chicken nuggets (they're the golden chicken trophies) are obtained by eliminating an enemy player and are limited to three being held per person. Below are the items you can craft at forges, as well as the time it takes to make them and any additional information to keep in mind.

The Legendary weapons also have elemental properties - fire, frost, and lightning. Fire does additional damage by setting enemies on fire, while also reducing the effectiveness of their healing. Frost slows enemies for a shot time, while lightning reveals enemies that are either behind cover or have the stealth perk active to everyone on your team. 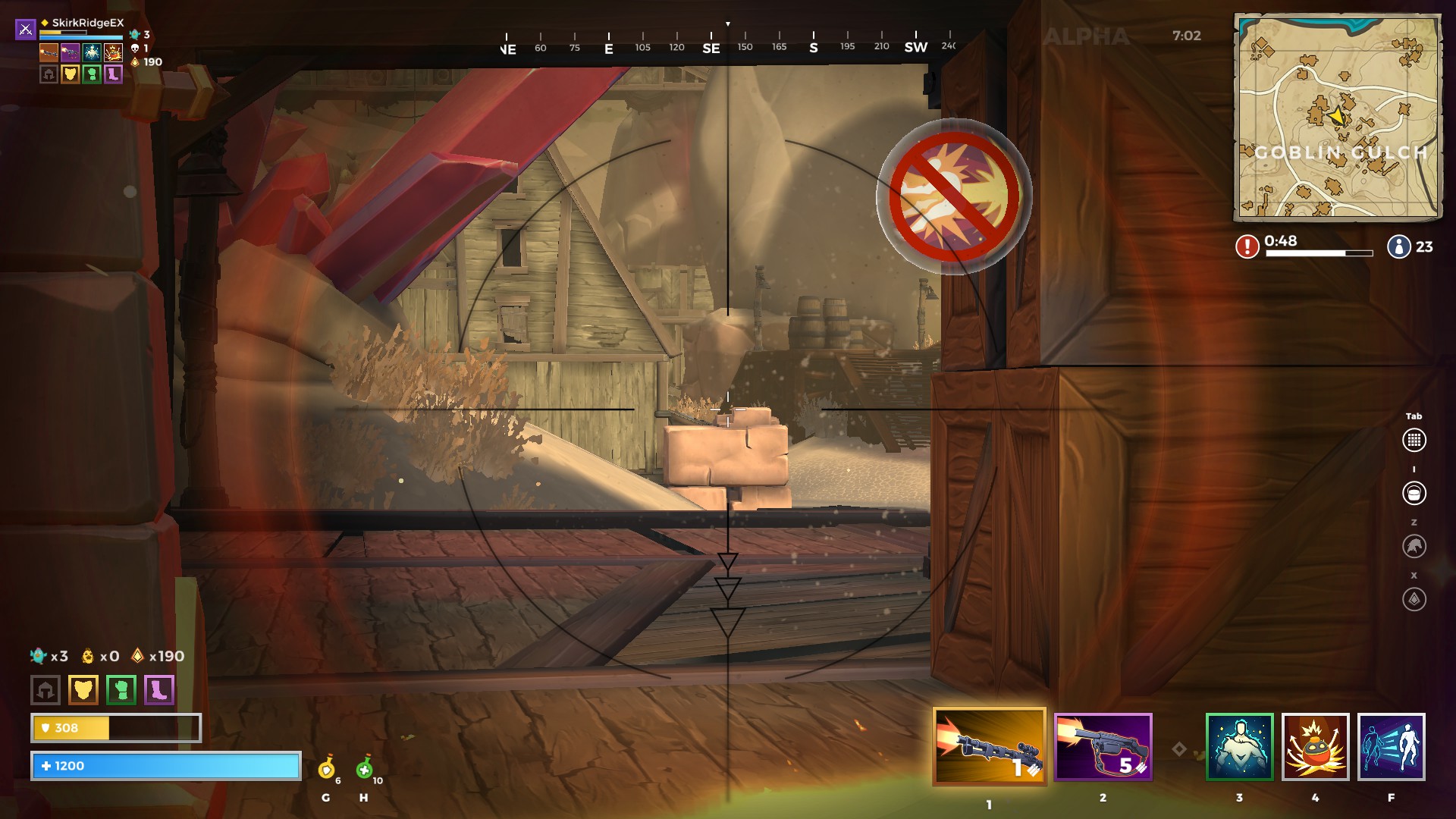 Which weapons should I be using?

Generally, you should be using what you're most comfortable with using. Practising with certain weapons will get you more used to the way each one fires. For those that wish to take things to the next level, there are some advantages, such as the number of shots it takes to make your enemies cluck, but there are also some little things to keep in mind when using any given weapon. As the game's alpha progresses, there will be changes made to the behaviour of the weapons, as well as the current roster. Here's how each of the currently available items fare.

The only melee based weapon in the game as of the time of writing, the sword has limited uses. It's silent, but you have to get the drop on your enemies to effectively use it. Certain classes such as the Warrior with his charge, or any class that can inflict slow can close the distance of a fleeing enemy to swing the sword for high damage, but for most players they'll rather opt for the shotgun for close-quarter combat. Since you can't land blows to the head, this weapon can't inflict critical damage.

Revolvers in Realm Royale have a rather limited use and probably it's best thing it has going for it is the rate of fire and that it can inflict critical damage with headshots. It's outclassed by every other gun in the game for damage and should only be used in moments of utter desperation since their range is small.

Being able to inflict status ailments on your foes is not a common thing in battle royale games, but the poison gun's burst fire of toxic bullets can cause some lasting damage should they connect. It can also inflict critical hits, with poison damage scaling to match if it's the first shot that hit the enemy's head. That said, its usefulness depreciates as the game progresses, so it should be swapped out for something more powerful if the chance arises. However, if combined with any skill that reduces speed, stacking ailments is a good way to fluster your opponent.

A relatively simple to use medium range gun that does have a high fire rate and does a decent amount of damage, especially on a critical hit. However, the crossbow's projectile speed is just a bit too slow for it to be considered superior to other medium to long ranged weaponry, so should be swapped out if something better comes along later in the game. If you can get used to the slower projectile speed though, this should last most players a fair chunk of the game.

Widely considered one of the best guns in the game at the moment, the Heirloom Rifle is just generally good no matter if you're at medium or long range. The projectile speed is higher than the crossbow, while the drop off for both ammunition in a clip and smaller fire rate is negligible when compared to the crossbow. It does make more noise though so be sure you're in a good spot to engage before pulling the trigger.

Confusingly, the Slug Rifle is also a decent medium range rifle, but there are key differences. Firstly, the damage is more than the Heirloom rifle, but at the cost of both projectile speed and ammunition in a clip. The Heirloom rifle is much better the further out you are, but the effectiveness of firing slugs into your opponent can't be understated. It's the second most powerful standard gun in the game, so a good option for most players.

Currently the highest damage dealing weapon in the game outside of the class legendary weapons, the Shotgun is a monster up close and generally surpasses the sword in every department. The enemy is usually dead when the clip runs out, but reloading times aren't too horrible for the shotgun compared to other games. Its major downside is that it's the equivalent of sounding off a foghorn when fired, so be sure that the target isn't just going to escape once you deliver that payload.

Fires at a relatively slow intervals, but it does pack quite the punch at range. It has a decently sized clip before reloading as well so you can fire on a target for a sustained period of time. Perhaps the biggest caveat so far is that there is a good amount of spread. It should be one of the weapons you keep an eye out for a decent version of however as it has no damage falloff at the time of writing.

This thing fires three shots at a time and also has no damage falloff at the time of writing, it's extremely accurate and can prove devastating at epic and legendary grades. There is a sizeable gap between each volley of shots, but by that point all three shots should land for decent damage. If you're used to burst fire in similar shooters, then the Burst Rifle will probably be your go-to weapon of choice when firing at long range. Just note that each bullet does a far smaller damage than other long range weapons.

Those eagle eyed readers may be wondering where the class weapons are. Well they're definitely the best weapons in the game for various reasons. Those can be found over in our Realm Royale class guide that also details the various skills on offer and some general tips on how to play each one. Alternatively there is also the Realm Royale map guide which will focus on the map itself and features to look out for in the many different locations out there.