With their new game Realm Royale, Hi-Rez are taking on the likes of Playerunknown's Battlegrounds and Fortnite, but instead of taking what's already successful and simply slapping their name on it, they've brought more of a unique spin on the genre. It's set in the same fantasy world as Paladins, for example, and it adds forges to craft gear and the ability to scrap weapons into resources. Oh, and dying turns you into a chicken.

So in order to not turn into poultry, this guide will take you through the basics of Realm Royale, what's different about it compared to other similar games, and some general tips and tricks in order to obtain that coveted "crown royale".

As Hi-Rez's plunge into the battle royale genre, Realm Royale attempts to change up by introducing the ideas of classes and crafting weapons into the equation. If you've experienced battle royale game before, then a lot of the basic conventions will be familiar, but Realm Royale has some things you should probably know before even beginning your first game. For those looking for more detailed guides on the five classes in the game, the weapons and loot that you can get, and details about where to go on the map itself, these can be found below. 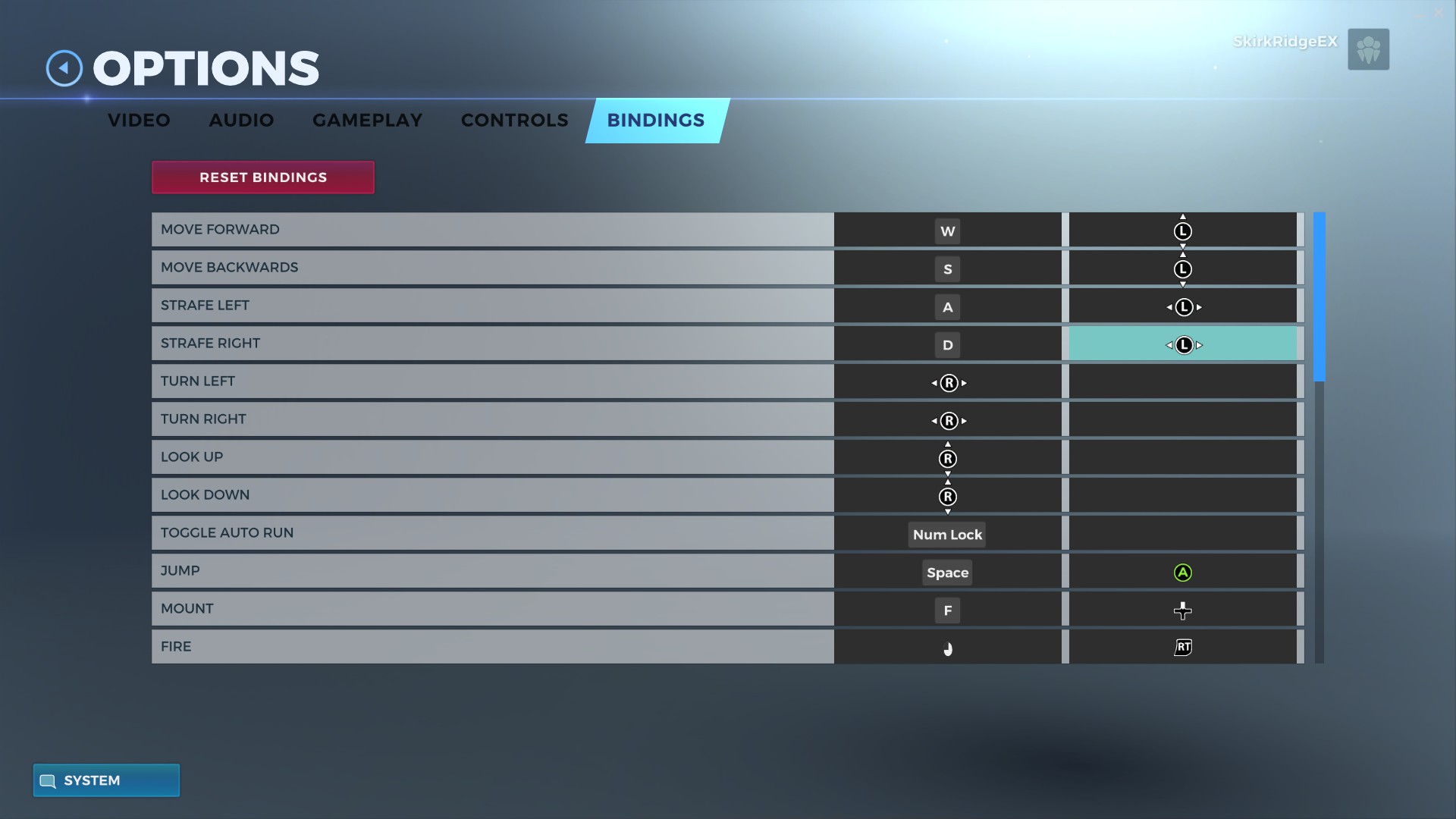 Before you begin to play, it might be an idea to rebind your controls, especially if you're playing on keyboard and mouse. The default key bindings are utter tripe and should be changed to something that you're comfortable with, but realistically any button you press on a keyboard and mouse should not have you stretching your fingers too far. Those worried about mapping the sprint button need not be. Realm Royale defaults every character to sprint, so therefore you can have the Shift key as your movement ability instead. If you have a gaming mouse, then make sure you use all your relevant buttons.

For those that want to tinker further, it may also be a good thing to experiment with reticle types and reticle colour, as well as the mouse sensitivity in-game. The defaults change the type of reticle based on the weapon equipped, which is alright for some but may not be for you. There's a fair few settings to have an experiment with and you may find a personal preference here for all weapons.

Once you've sorted out the controls to something infinitely more tolerable, you'll likely want to jump into a game. If you're starting out, don't do this yet, but instead watch the two tutorials that Hi-Rez have included with the game. These are just very basic tutorials designed to get you up to speed with the key features such as what the forge does and disenchanting items for scrap, plus introduce you to the chicken - more on that later. 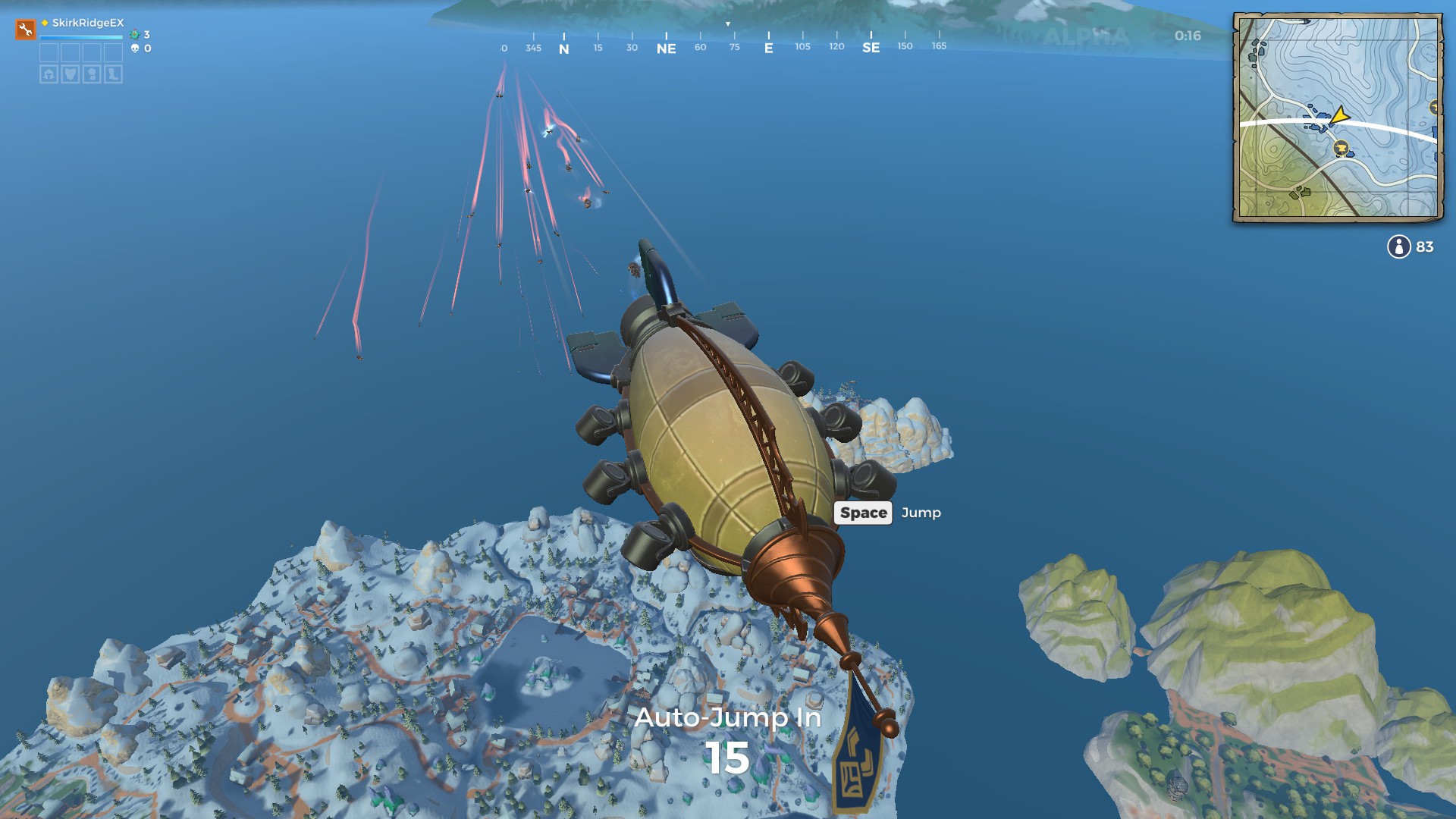 As soon as the game loads, rather than go jumping around the island like some mindless buffoon, press and hold the map button (the default key for this is TAB). For some inexplicable reason, the first fog circle is already present on the map, meaning you can plan somewhat ahead. Do you want to go where is safe, or do you want to go somewhere outside where other players may not be there? Either way, as soon as the game begins, the zeppelin will appear on the map to allow for a quick decision.

The other advantage to surveying the map is that you'll know how close to drop to a forge. Unique to Realm Royale are a bunch of forges that upon spending scrap and chicken nuggets (obtained by killing another player outright), you can craft legendary armour, weapons, and skills; as well as health and armour potions. So early on you'll want to be relatively nearby these locations in particular. The best places really to drop are the named places, but depending on the flight path these can become densely populated. Icehaven is particularly popular thanks to the tons of surrounding houses, while other locations like Gun Town and Lumberfall are surprisingly sparse if the flight path isn't nearby.

When you do jump out, there's no parachute, so be sure when you drop is well timed to avoid an embarrassing landing. Unlike Plunkbat, there's no indicator of how many people are left on the zeppelin, so the only real way to tell for sure is to look behind the zeppelin and see them bail out.

The tricks keep coming when it comes to the fog, as it's not just the beginning of the game that allows players to predict where it'll go. If you glance at the map when it's safe to do so, you'll occasionally notice golden chests appearing. They stay on the map for a short time, but their locations are an indication of where the next fog circle will be and the areas that are safe. Even if you do somehow get caught up in the fog, you can still mount your horse (defaults to the Z key) to get an extra speed boost.

One of the key differences between Realm Royale and most other battle royale shooters is that weapons and armour have a rarity level. This is colour coded from white for the most common variant, green for rare, purple for epic, and orange for legendary. The same goes for skills as well, so while you start out with a movement skill that's the common variant, you are able to loot the rare, epic, and legendary versions that are just objectively better.

When looting equipment, keep an eye on the HUD in the lower left of the screen for your armour levels, as well as the colour of your equipped weapons and abilities. The good news is that you don't need to look at the specific stats for every weapon, armour, and skill - there is no difference between two common shotguns for example. Just be sure to scrap any excess items found in the game in order to create stuff at the forge. 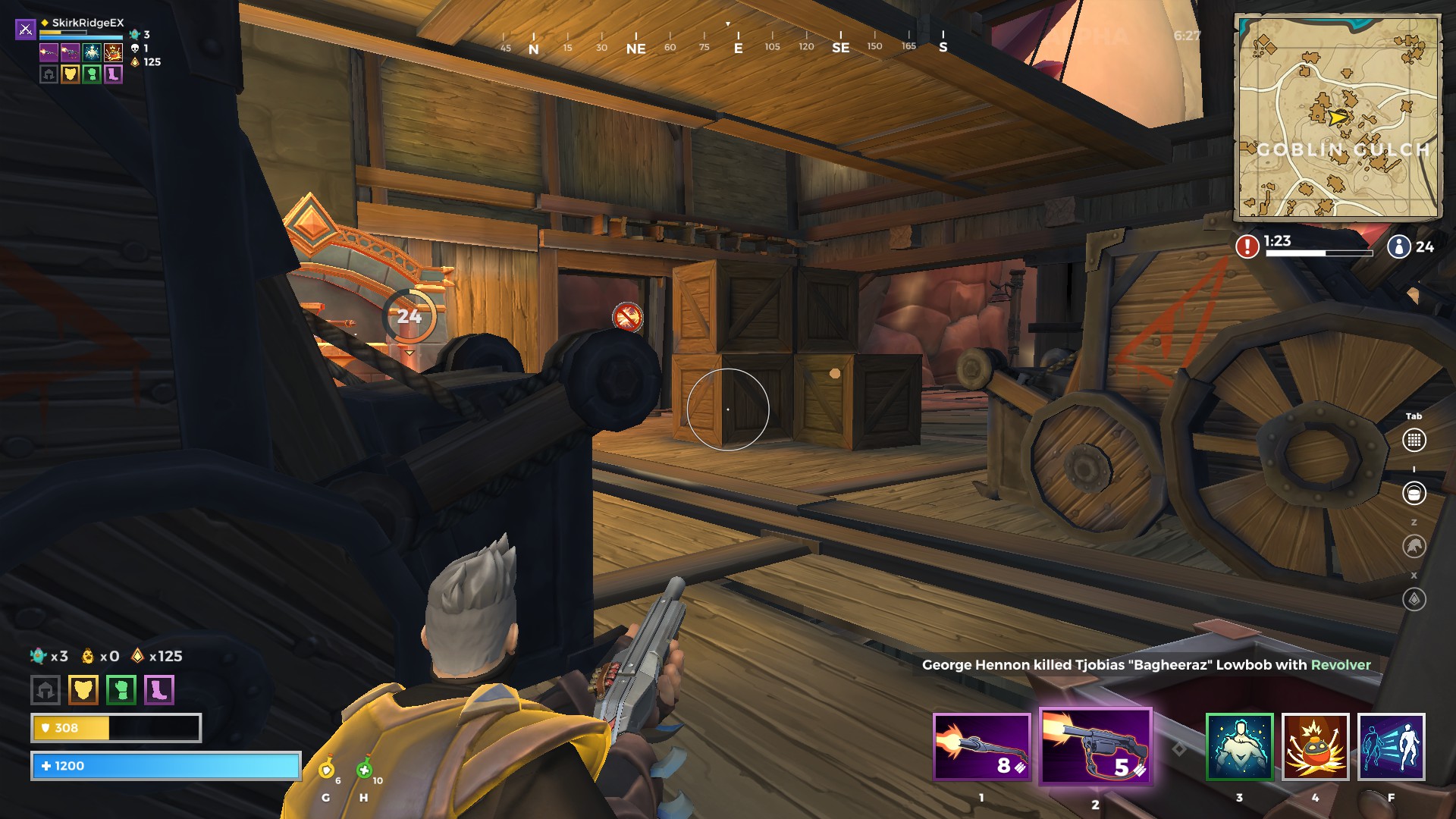 Crafting legendary gear at the Forge

Despite the fact that loot is scattered throughout the map, the best stuff is reserved for crafting. Since you can accumulate a maximum of 200 scrap, it's perhaps advantageous to make a few potions where you can, as well as the legendary gear. You can create more than one thing at a time, so there's no need to wait to spend all the scrap and any chicken nuggets you have at once.

In a more recent update, there's now a bigger focus on crafting at the forge to gain legendary weapons. While all legendary gear takes the same amount of time to craft, the basic legendary weapons now cost 120 scrap and one chicken nugget, while class weapons cost the full 200 scrap you can carry and two chicken nuggets. The upside is that all legendary class weapons include elemental damage, be it fire, lightning, or ice damage.

The big caveat is that as soon as you begin to build, a countdown will appear, which upon reaching zero will spawn the item you created. In addition to waiting, that countdown is also visible to other players, so the idea is to hide somewhere to ambush them. Most classes have at least one skill that aids in ambushes, so it's generally a good idea to have one of your two mapped skills you can loot throughout the map be one of these. For more information on the types of skills, check out our Realm Royale Class guides.

As for what to do when people are crafting at the forge, there are some early signs that give them away if you know where to look. If there's smoke in the direction of the forge, then someone is likely in there trying to lure you into a trap. You can either choose to avoid conflict altogether, or carefully attempt to get the jump on them. There's no guarantees of course though. 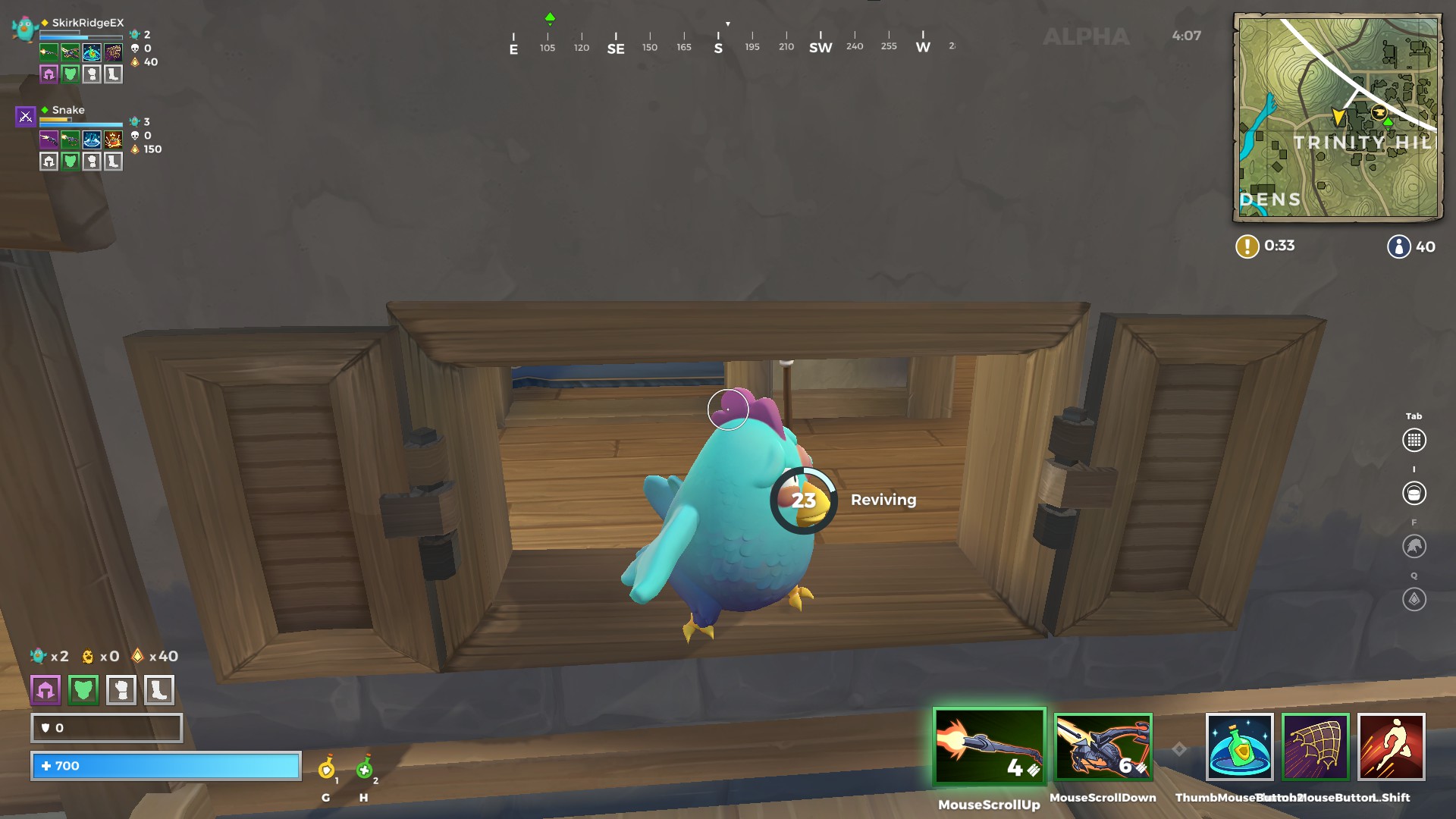 Why am I a chicken?

There will be times when you are picked off by an enemy player. You'll know when that is because suddenly your character will turn into a chicken and begin a frantically clucking. Normally your enemy will finish the job, but there are times when they get distracted by an unseen player. This is your chance to attempt to revive yourself. All you need to do is avoid being seen. Chickens will always cluck, but they tend to cluck a lot less when standing still. Provided you've not been spotted, this is your best chance at surviving the countdown until you are revived. The best bit is that you'll still have your equipment, a chunk of health, and all those valuable potions to guzzle as soon as you're back.

But what if you are spotted? If you're out in the open, you're pretty much a dead duck unless you're significantly far away from your assailant. Cover can help, but it's far from ideal. If you're in a building however, there is something chickens can do that humans can't normally: Jump through windows. Because they can't follow you too far, as long as you're nimble enough to get out of line of sight, they need to run the long way around, to which you can just annoy them further and jump back in. Other players can crouch jump to get through larger windows, while some movement abilities like the Mage's Soar can also glide through, so be aware of your pursuer.

Why did I become a chicken?

In short, the reason you got turned into a chicken is because someone shot you enough. Sometimes this is down to the fact that they got a better gun than you, but more often than not it's because of some terrible habit or some small thing that hadn't been taken into account. Unlike most games, jumping in Realm Royale is usually a terrible idea thanks to the huge amount of hang time at the top of the jump. If you're leaping around as if the floor is made of hot coals, enemies are just going to aim at the apex of your jump and fire when you get there. It's a much better idea to weave around, or crouch occasionally instead.

There is one sole exception to this however. Riding around on a horse should actively be encouraged to get around the map faster, but the horse's hooves are unbelievably noisy, clopping like having two abnormally large coconuts halves being banged together. So by having your horse jump around, you make less noise, thus mask your movements a little more when travelling from location to location.

Starting out, you're likely to run into some stumbling blocks, but with these tips in mind you should at least have a bit of a head start. There are more detailed guides on the specifics of Realm Royale's weapons, classes, and the map itself. We'll keep this updated as the game progresses through its alpha and beyond, so watch this space.