Stop whatever you're doing and go and buy some entirely superficial DLC for the latest release in a mainstream videogame franchise right now. Today is the day Rock, Paper, Shotgun betrays everything it once stood for (for about three hours one day in July 2008, probably). Because today is the day I played the excellent Resident Evil 2 remake in the nothing-less-than-glorious Noir mode.

£2.50 just to take all the colours away: I'd happily pay twice that. This black'n'white movie-style mode ratchets up the fear and the mood massively, giving this a haunting Night Of The Living Dead vibe that I would not now go without. (Also, you can stick Claire 'n' Leon in excellent 40s gumshoe outfits).

Noir mode is a black and white filter bundled along with the Noir outfits for Claire and Leon - sadly these are sold separately, at £2.50/$3 each. If you're only intending to play Resi 2 with one character, you only need one, but obviously you're not, so you'll need both, which makes the total price a little harder to swallow. Alternatively, you can grab the whole Extra DLC Pack, with more costumes, a bonus gun and an alt-soundtrack, for £12.50/$15, but none of those other bits and bobs are half as brillo as this.

Or you can just turn down the colour on your monitor, obviously, but the Noir filter is not merely black and white. It also cranks up the contrast, making blacks blacker and lights more glaring, which does even more claustrophobic things to overall atmosphere. Shadowed areas are spookier, light plays across characters' faces in much more interesting ways than the fairly soupy full-colour look, and all told I simply can't think of any reason to play Resi 2 is normal mode when we have this, extra cost aside.

Here's a look at it in action. (Forgive the sound quality, I had some issues but couldn't return to repeat this section due to the way Resi 2 saves work):

And here are a few of my many, many treasured screenshots of Noir Resi 2. Notice how much more (for lack of a better term) realistic characters seem with this black 'n' white lighting. Who needs ray tracing and HDR when we can leech the colours away and ramp the contrast up instead? 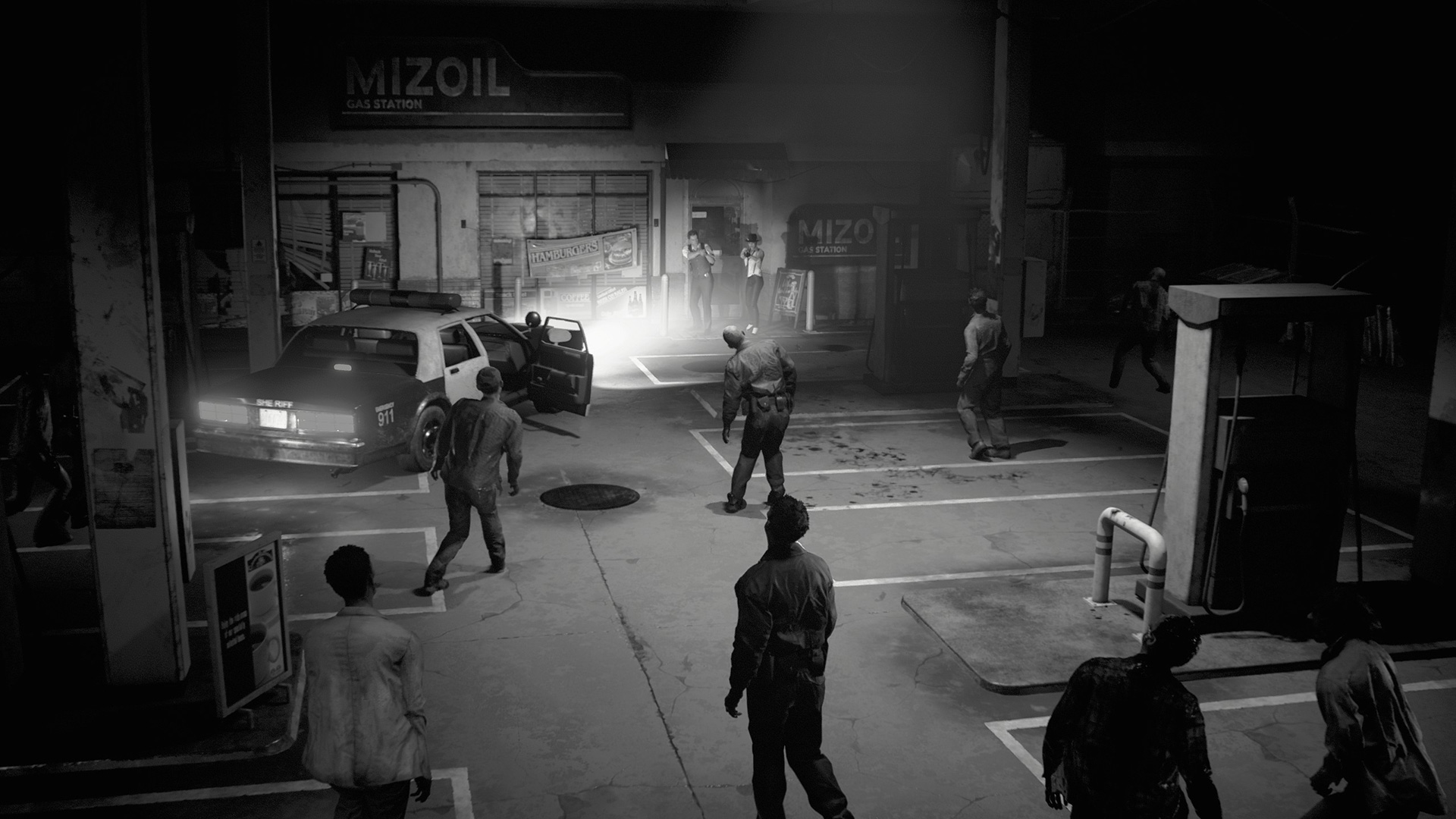 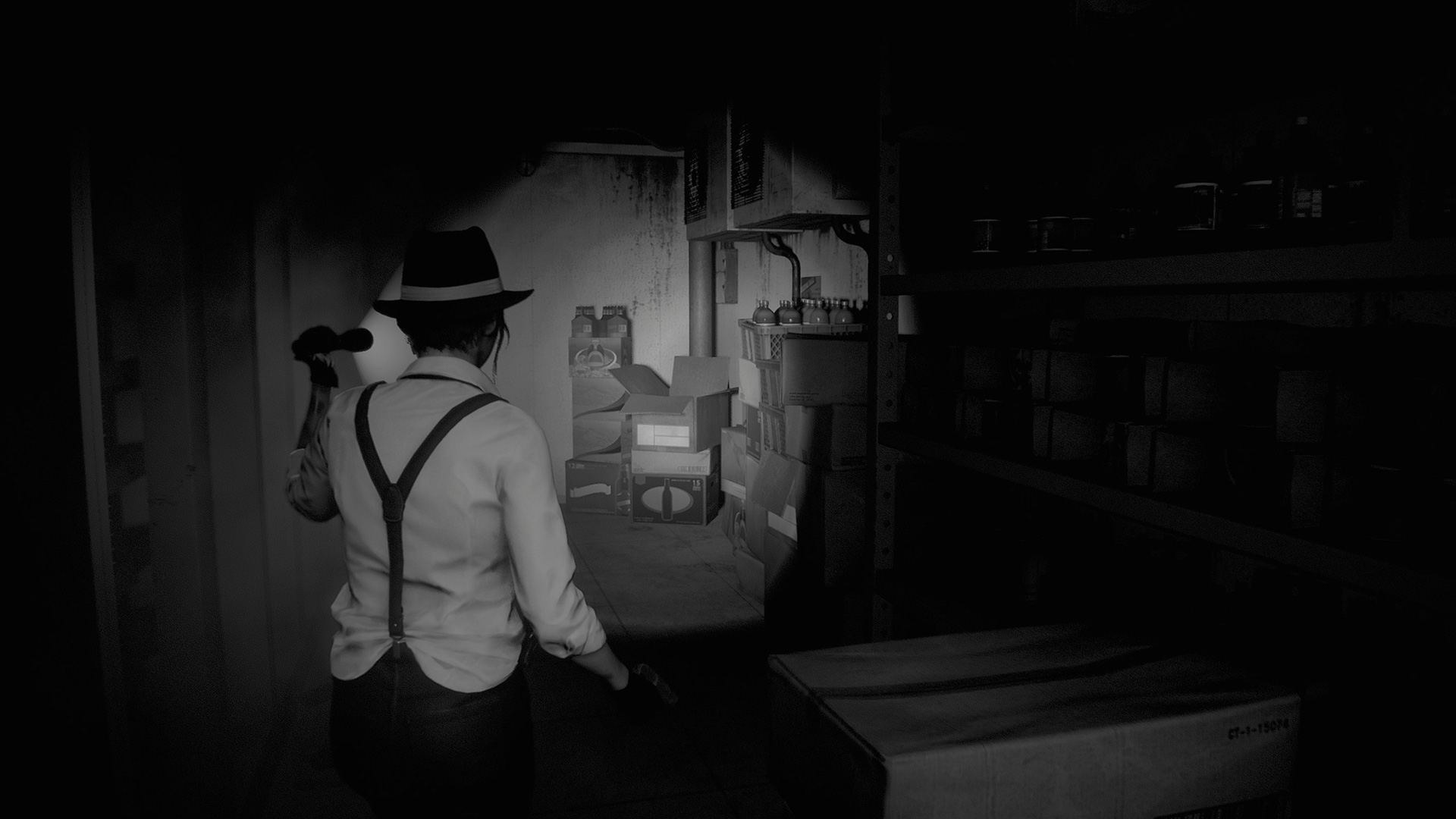 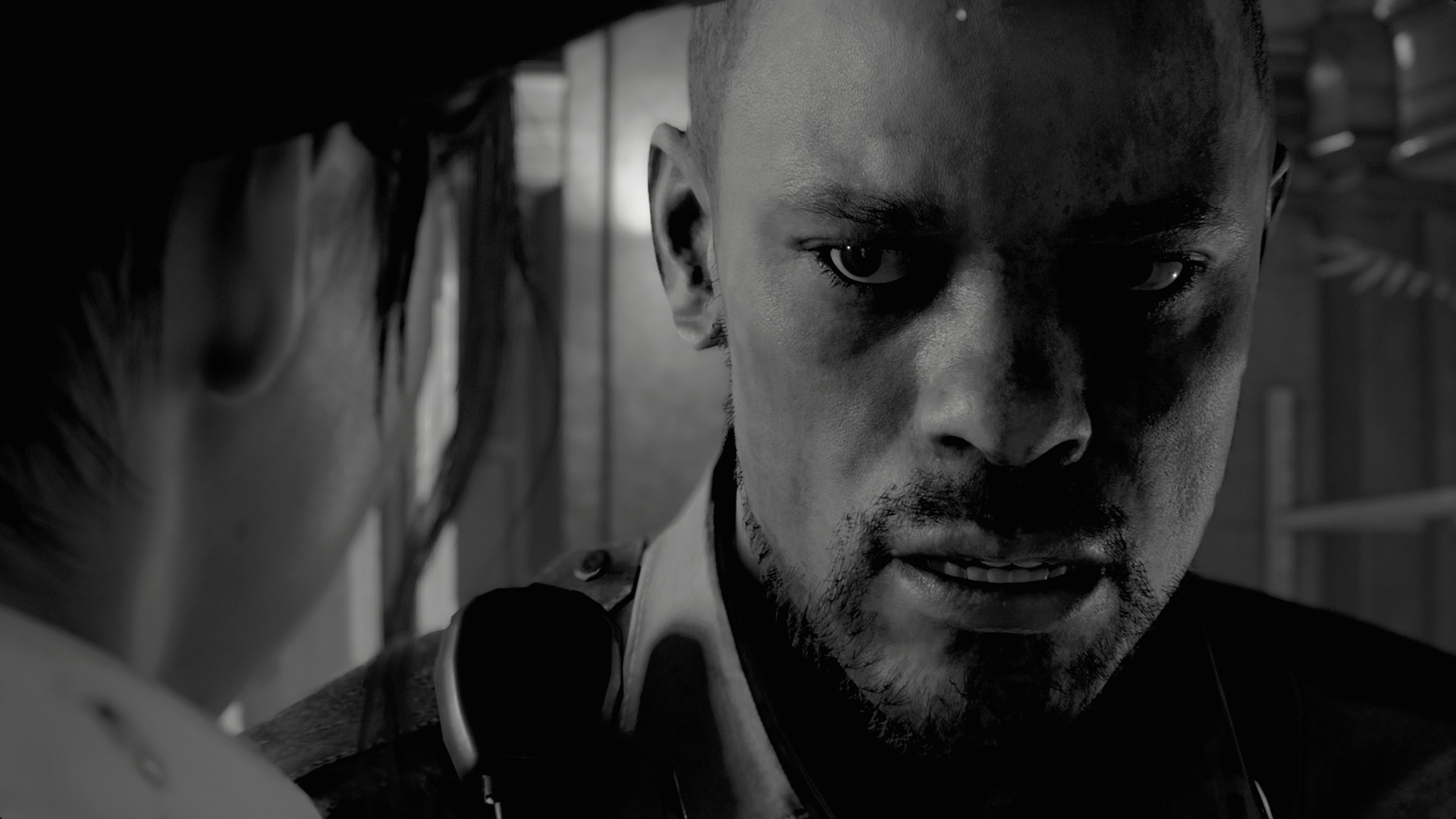 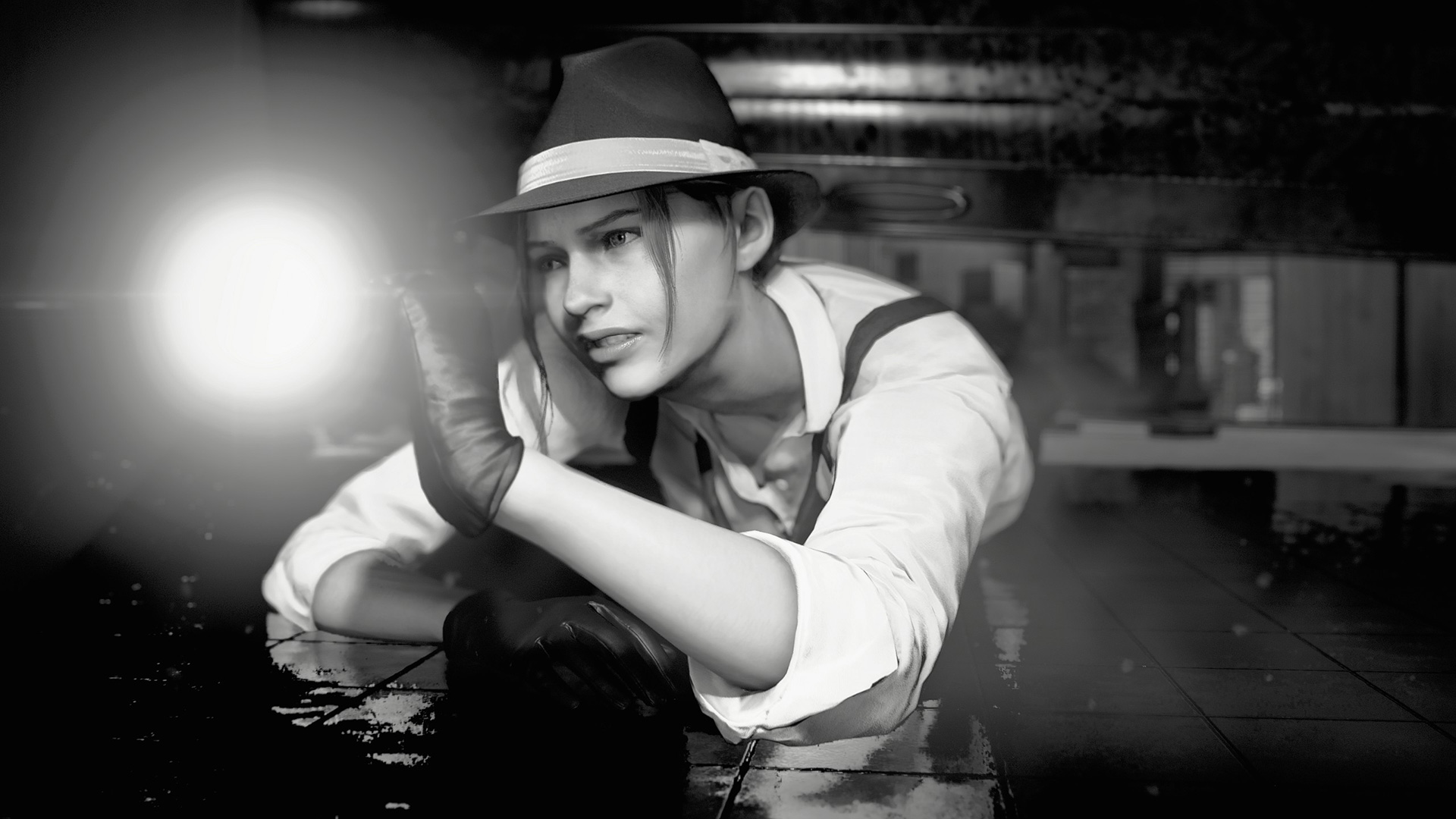 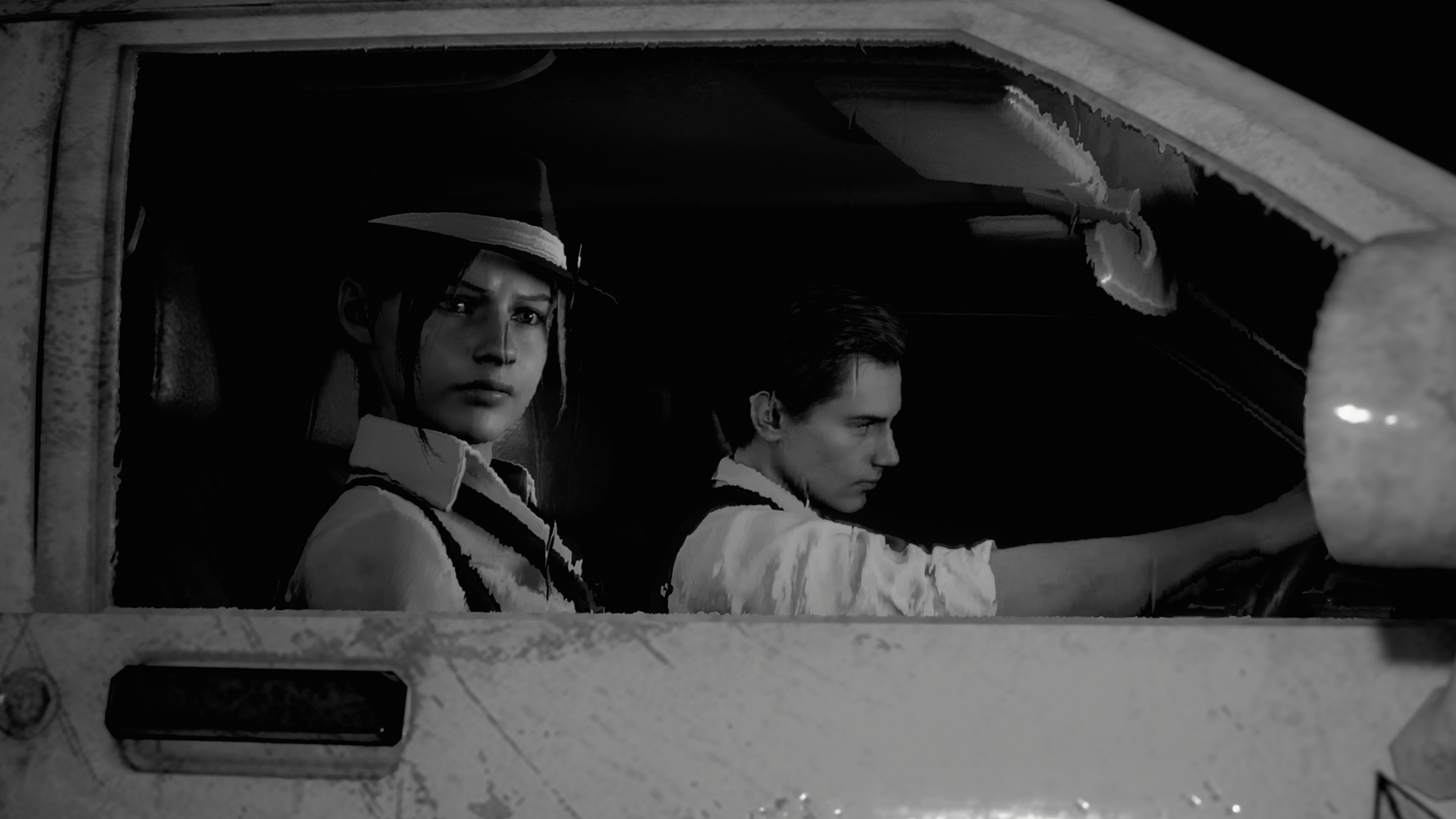 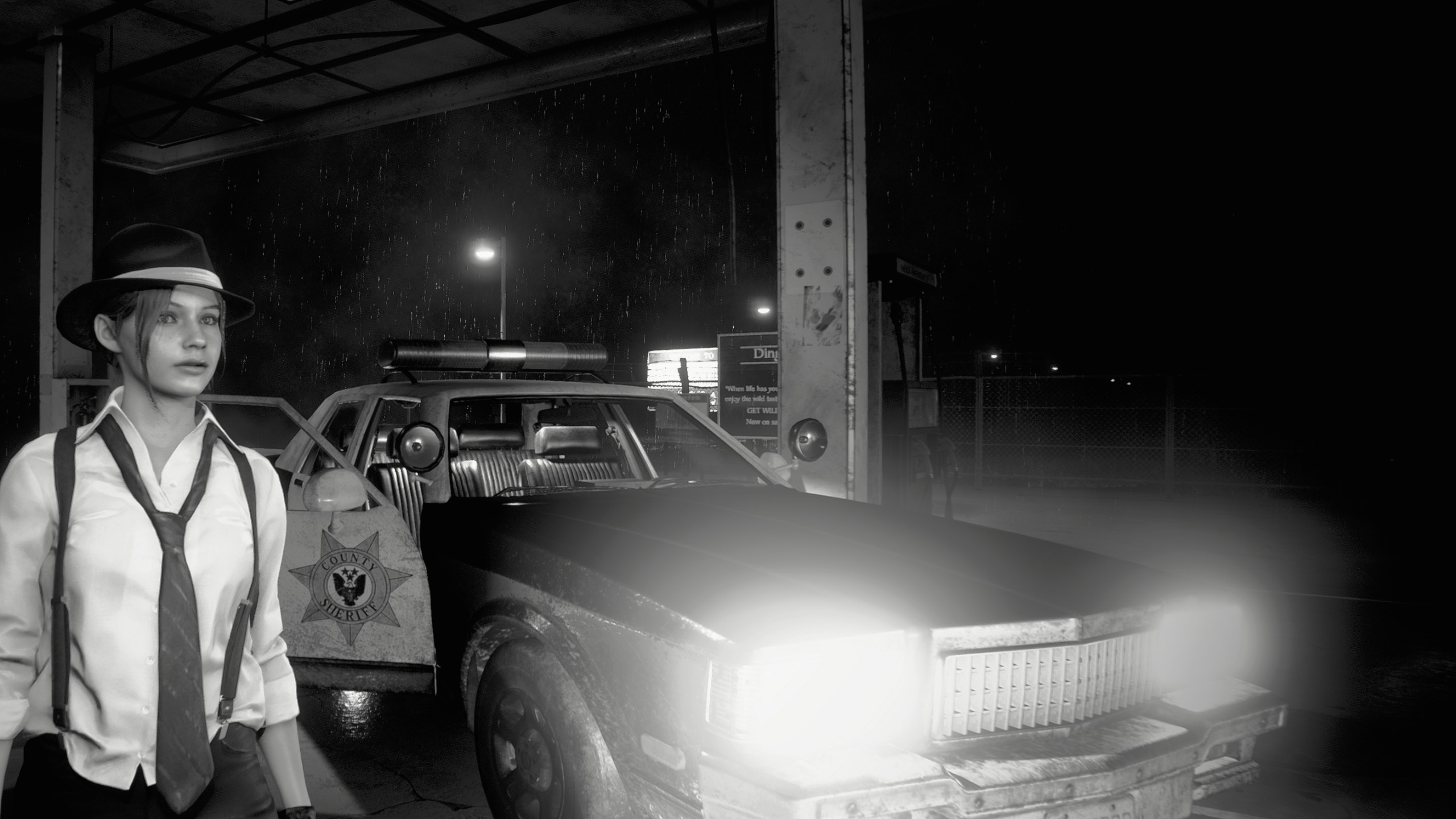 Here's some compare and contrast, too. Resi 2's a good-looking game - hard to believe it's a remake of a 90s PlayStation 1 shambler - but so much more striking and moody in Noir mode: 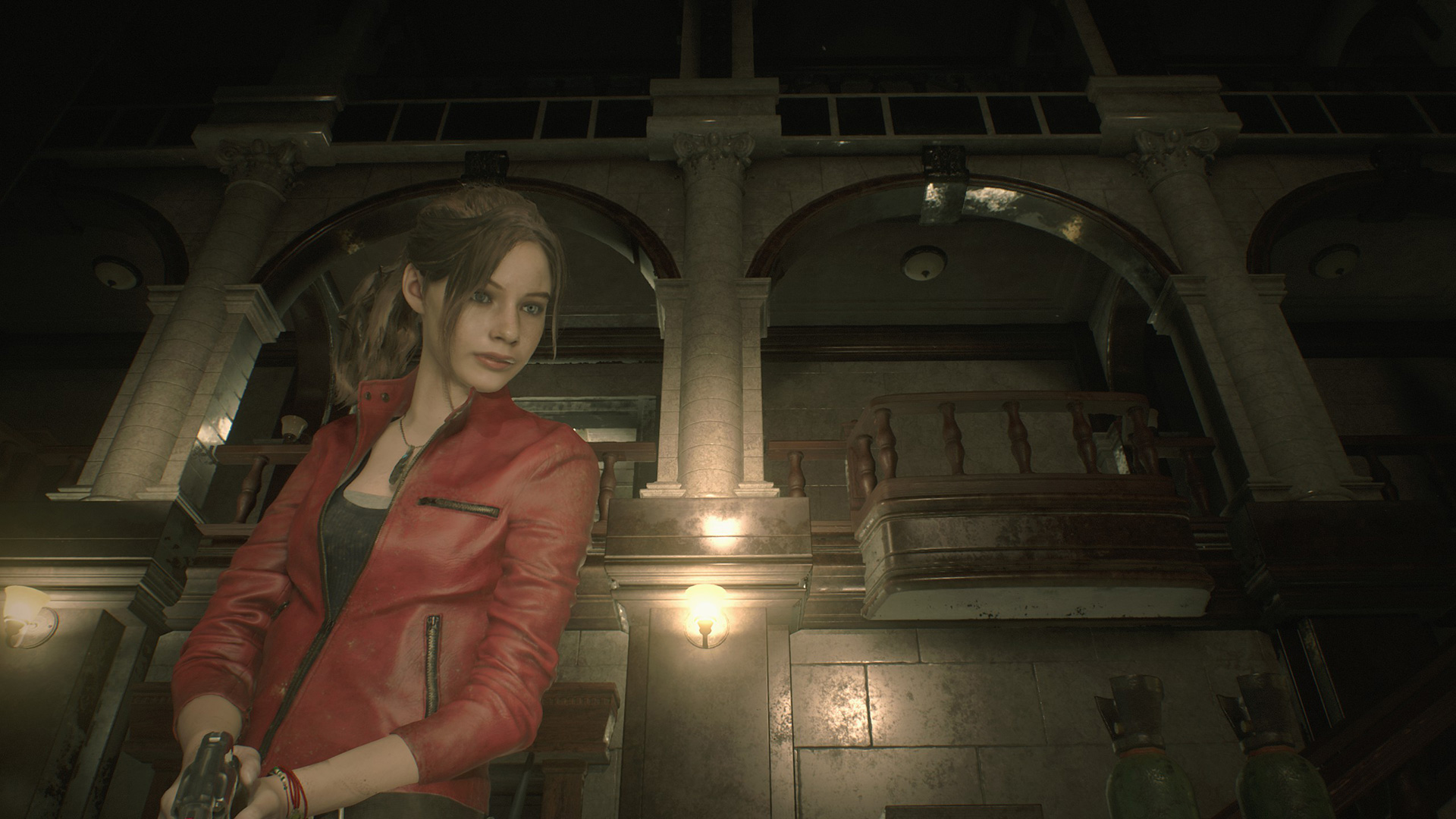 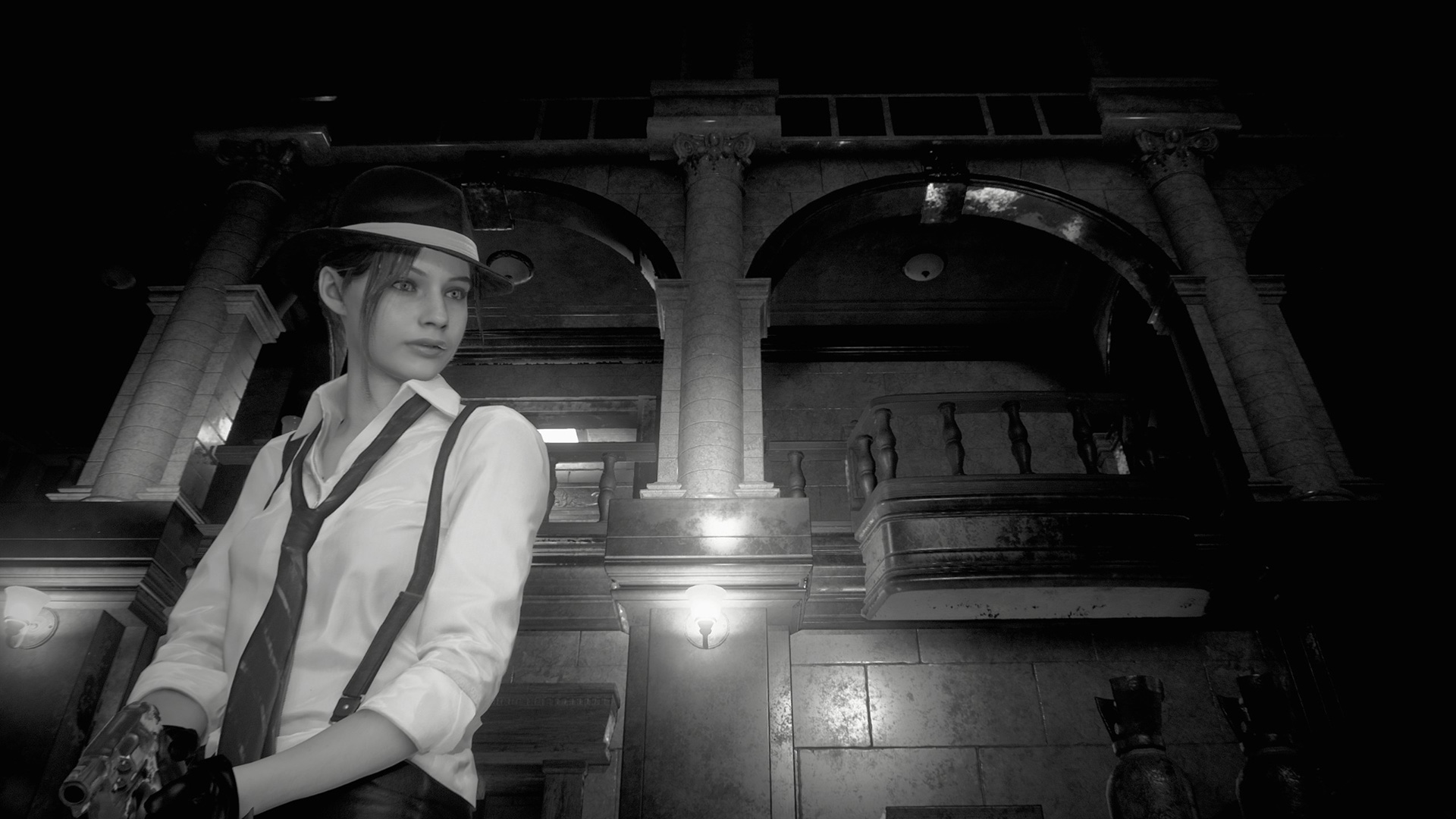 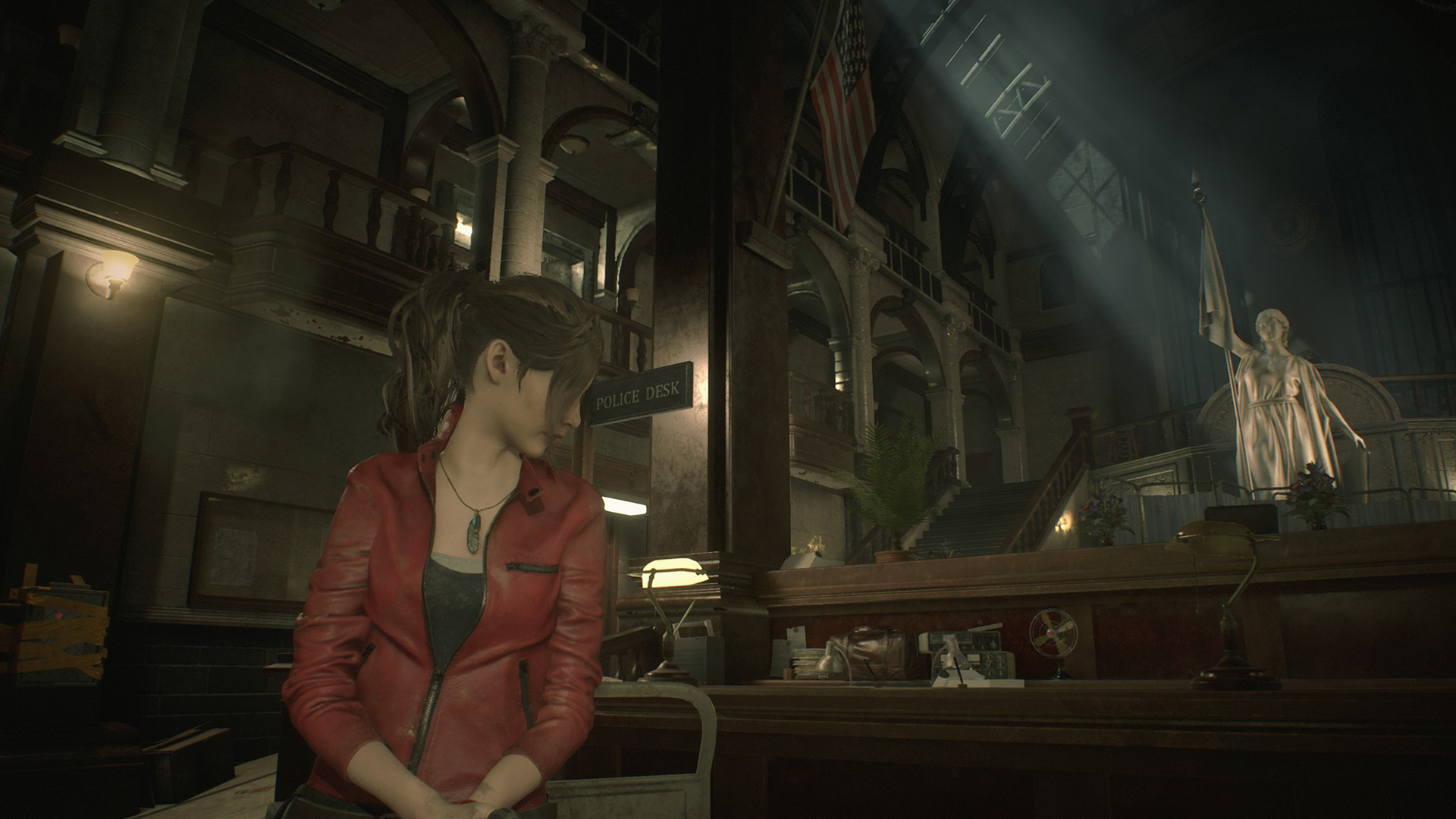 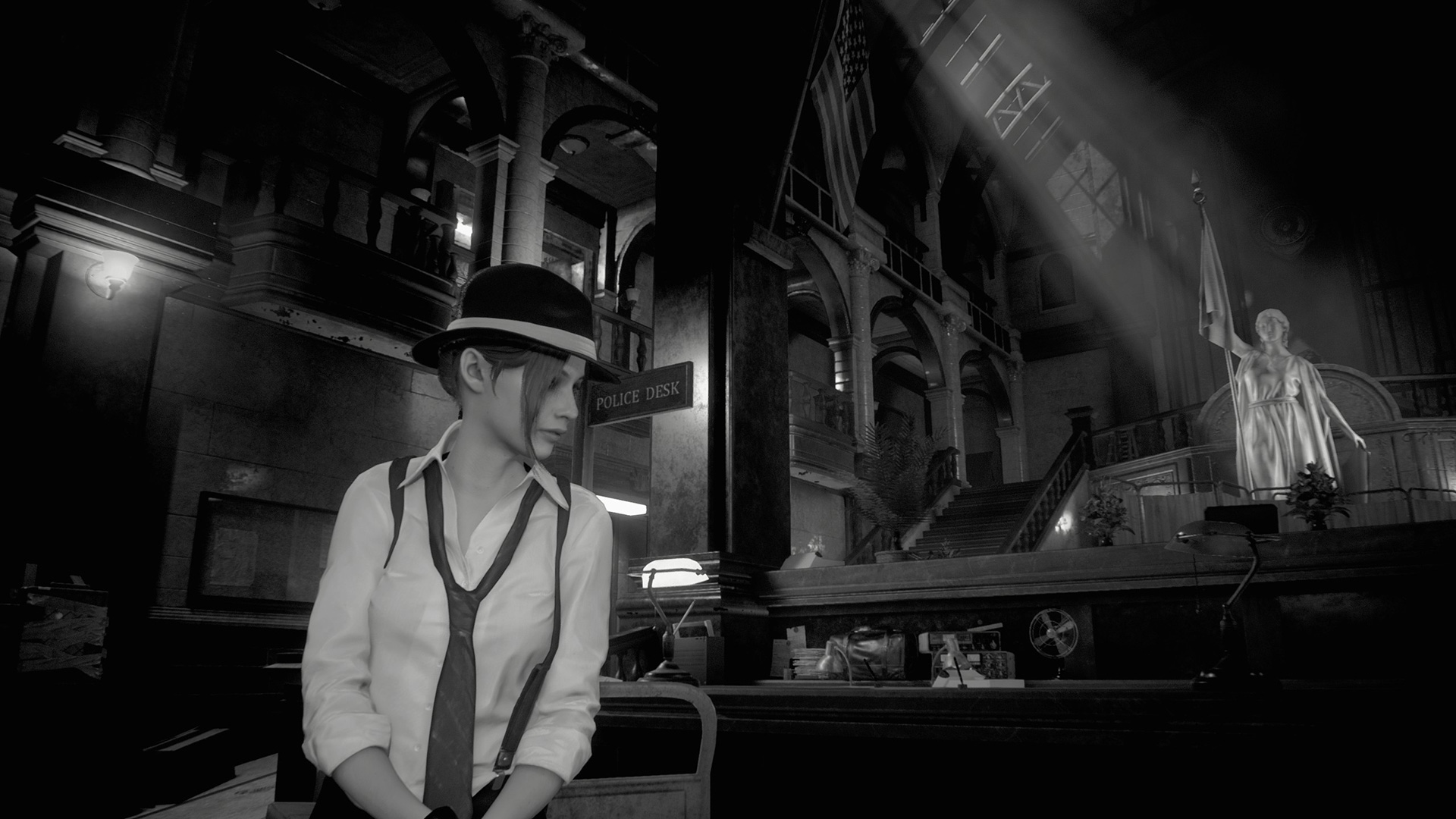 It would be remiss of me not point out how well Claire pulls off her gumshoe outfit, too. Here she is, rocking that undone tie and cool as a cucumber even as someone's guts flap and spasm right next to her: 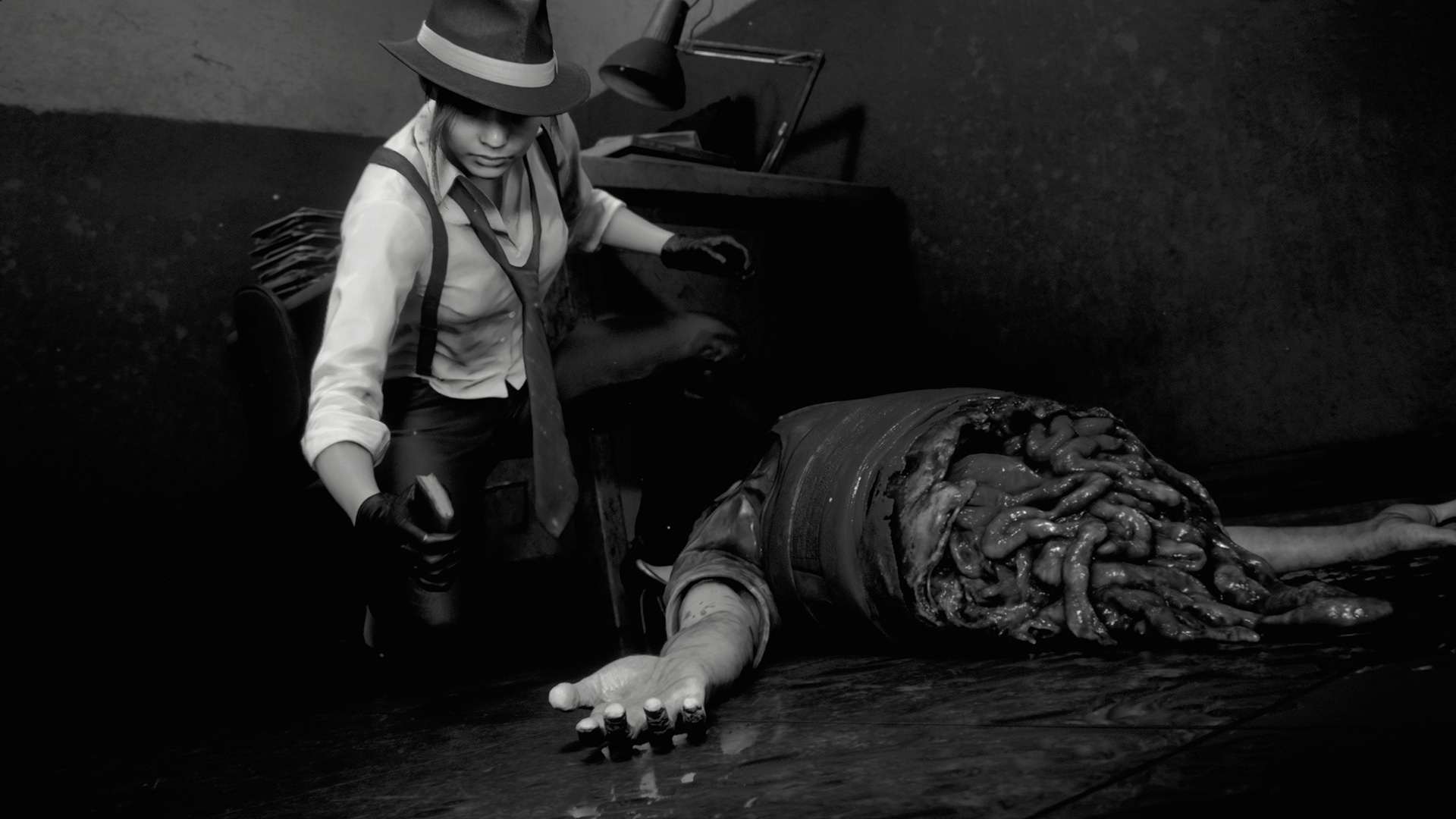 Unfortunately, the effect is somewhat undone by someone's decision to add high heels to that outfit. Those are thoroughly unsuitable for sprinting through flapping and spasming guts at speed. 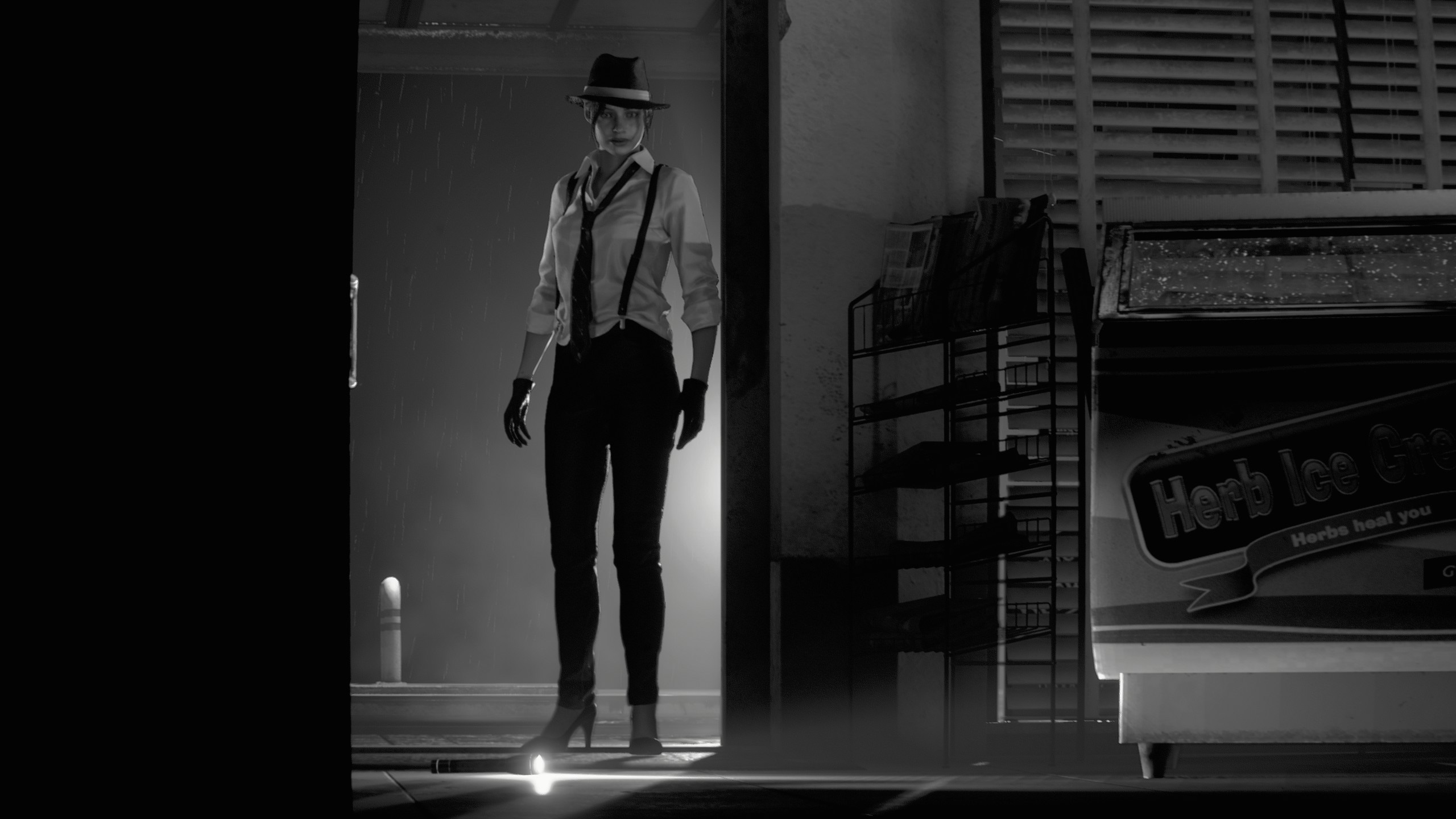