Alec: Foundation is like a ba… no, I already did that. Foundation is - and I’m projecting onto it a bit here - a reaction against city-builders and management sims increasingly inclining towards survival and punishment, in this, the age of streaming and gitting gud.

It’s a cod-Medieval town management game, in which the pressure is largely off, and really the focus is more about designing your hamlet than it is making sure the poo comes out of the right pipe or everyone’s got enough raspberries to eat.

It’s currently my go-to relaxation game. Is this because I’m an old man with entrenched tastes and terrible reflexes, or is it achieving similar for y’all too, two of the three Alices?

Alice L.: It’s definitely a much more relaxing city builder than something like Cities: Skylines. For starters, you haven’t got a fake tweets pinging you every five seconds when some loser in your town complains about recycling (in the real world, that person is me).

Alice Bee: Foundation is just… nice. I have it open on one screen during lunch a lot, like a living screensaver. You know how you could get those fancy ones that were aquariums for a while? that, but a nice town. I told Alec that the reason I drifted away from city-builders is because they became so much about building utilities pipes and motorways and all that. Foundation is a wonderful salve to my municipal burns.

Alice L.: It’s definitely a lot more forgiving when your town expands. You don’t have to worry about your entry roads or making sure you have enough space for your new unlocks. It encourages you to re-build and move buildings as you expand, like the market, for example. People LOVE to live near a market, but they’re lazy so they don’t like walking to one if you’ve had to put your housing zone too far away. 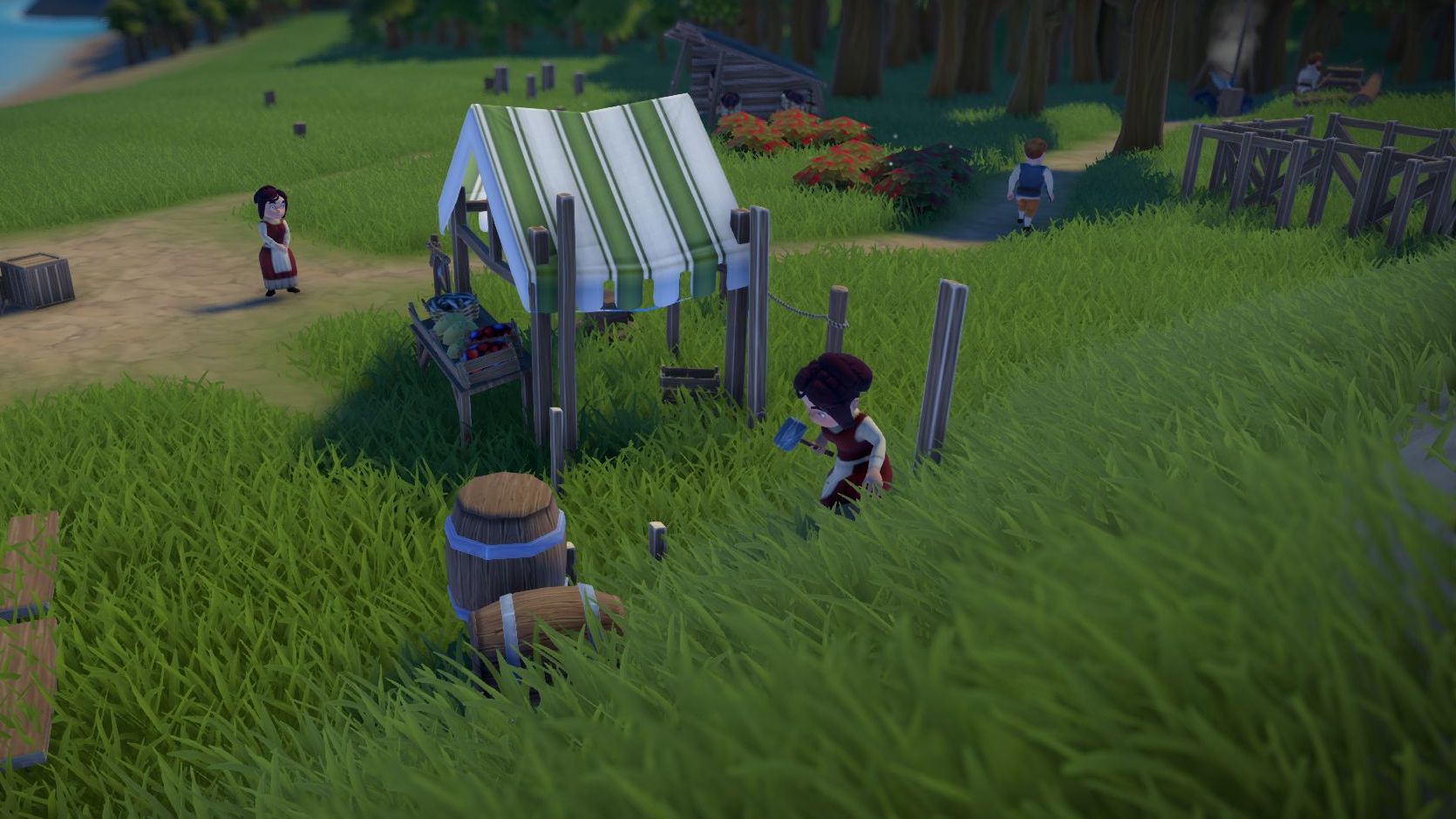 Alec: That’s interesting. In my experience, which was likely of a slightly earlier build, getting them motivated to walk wasn’t an issue. Which is precisely one of the reasons I’ve enjoyed it so much, I felt that much more free to plop stuff down without worrying that Ian Peasant wasn’t happy because his commute to the coal mine took a full 18 seconds. Is that definitely a thing? Or…. is it something to do with the zoning? I.e. if you’re not painting residential districts near workplaces, they’re probably going to end up concentrated around the centre where the market is.

Alice L.: Maybe my townsfolk were just being fussy? I mean, I hate having to walk too far for my food so I can understand where they’re coming from.

Alice Bee: My lads like being near the church and market too. God and bread are the staples, and they aren’t bothered about a bit of a slog to work. Which is good, because my housing zone is around the bottom of a hill, so I could put the windmill and sheep right at the top. I love that the roads form wherever your people walk, rather than you having to lay them. So that hill has a lovely steep path up it, too.

Alec: Mostly importantly: has anyone built a town shaped like a big ol’ ding-dong yet? I tried to make a smiley face town, but it’s pretty tricky cos the houses get built randomly.

Alice Bee: I 100% tried to make a ding-dong, but it didn’t work, because yeah, you just paint where they can build houses but nothing more specific. So I painted out a ding-dong shaped area, but it didn’t look like anything much. I might try again when I have more room. Will need to clear some forest, probably. Gosh, this paragraph all reads like innuendo to me now, and I didn’t even mean it to.

Alec: I confess I did spit some tea at the clearing some forest line.

Alice L.: I uh, can’t say I did try and make my town look like a dong. Am I playing this game completely wrong? 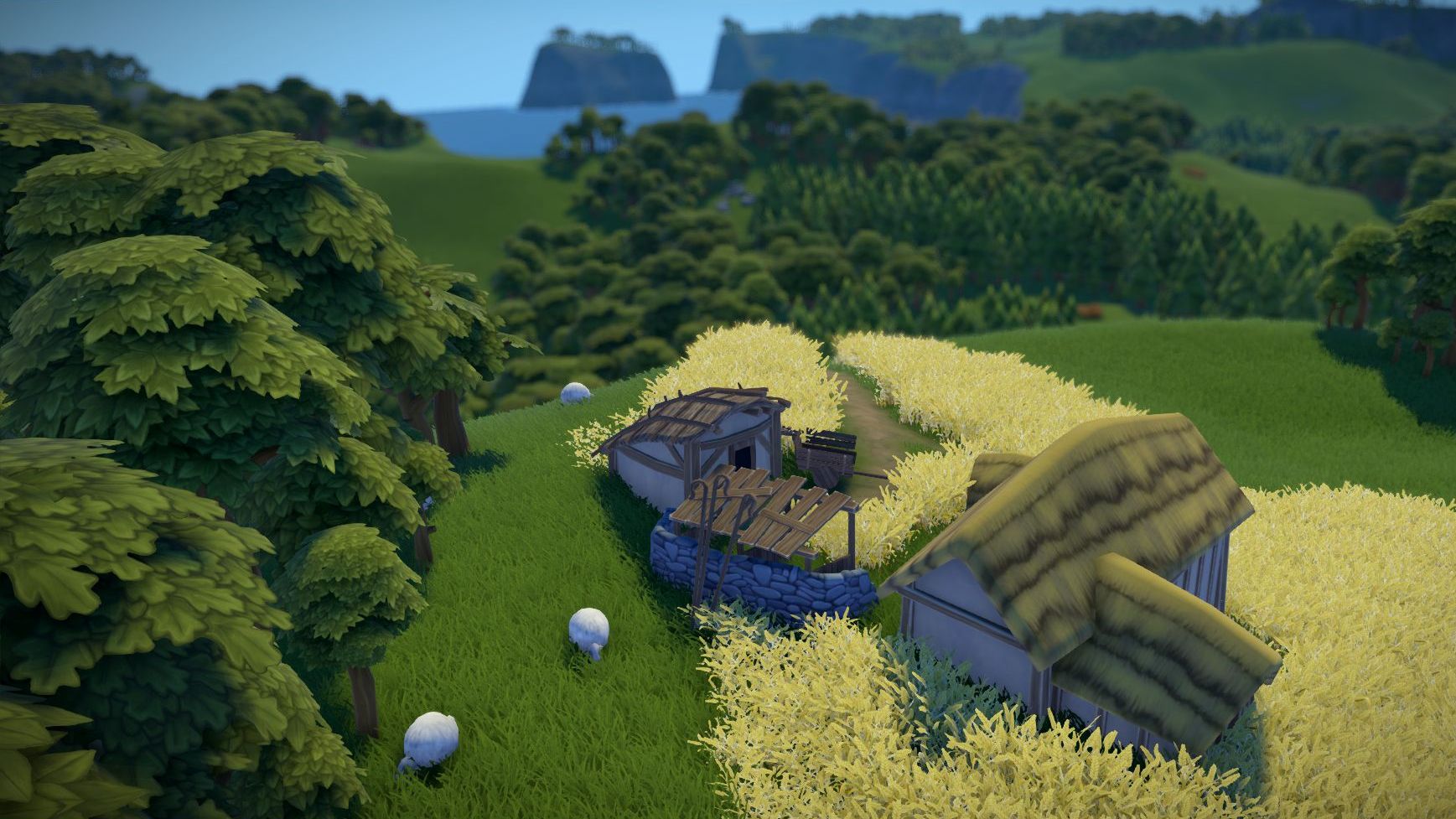 Alice Bee: Yes. But let’s draw a discreet veil over the ding-dong… Did either of you opt in to any of the fighting stuff? You know, the king sends you a letter asking if you want to get involved? I didn’t. I was having too much fun for a dirty big war to ruin everything.

Alice L.: I sent my soldiers to war. But don’t hate me. It’s because we needed the money. Wait, doesn’t that make me even more of the bad guy? Anyway, they all survived and came back with a healthy load of dosh.

Alec: I sent him a few soldiers but never got to Full War status. I’m pretty sure you don’t end up with fighting in your town, do you? You just commit some of your folks to far-off places from which they may never return. I could be wrong there. But similarly, I winced at the idea of fighting being in any way a part of my chilled-out life of windmills and sheep farms. It does feel like an aspect of the game that might get fleshed out later in development, but I hope they double down on the relaxing, designing element instead.

Alice Bee: Oh, me too. In fact I hope they don’t flesh out the war at all. Remove it. Remove all war. Let me build a ding-dong shaped village in peace.

Alec: Also not fleshed out yet is this implication of making tough decisions between helping the common-folk, the king or the church, and I think there are ways to explore making things more stressful there without undermining the unwind-y nature of the game. The idea that you might be forever locking off certain structures and thus have a specialised city, as opposed to trying to have one of everything. I like that idea.

At the moment it’s a bit underbaked -- you just cycle through who you’re gonna do a fish-consignment-based favour for next time, get a few points and then can use them buy a new wall or church spire. The systems for it are a bit confusing too, but it’s quite a nice way of having an unlock tree without the usual skinner box manipulation.

Alice Bee: I struggled there. There aren’t any instructions at all yet. Most of it you can figure out but, for that it’s just a pop up asking if you want to promise to collect some berries for the king or the pope or whoever, and I was clicking yes without understanding what that meant or how to do it. I had to ask Alec for help.

Alice L.: The whole thing messed me right up. Figuring out the warehouse storage situation was a nightmare. I ended up promising fish to the king at one point but didn’t have any way of getting fish other than buying it. So guess who went bankrupt? This guy.

Alec: Like, final, doom-y bankruptcy? Or just trapped in a money-hole for a bit? I had a few instances of the latter, and I liked that it seemed to present itself as a surmountable obstacle to growth rather than a herald of utter devastation. Which is part of the whole ‘like a bath’ thing to me.

Alice L.: It was my first ‘getting to grips with Foundation’ village and I ended up with minus 1000 coin, so I started again. I stopped promising fish that I couldn’t catch to people, and instead kept everything to myself until I could function properly. 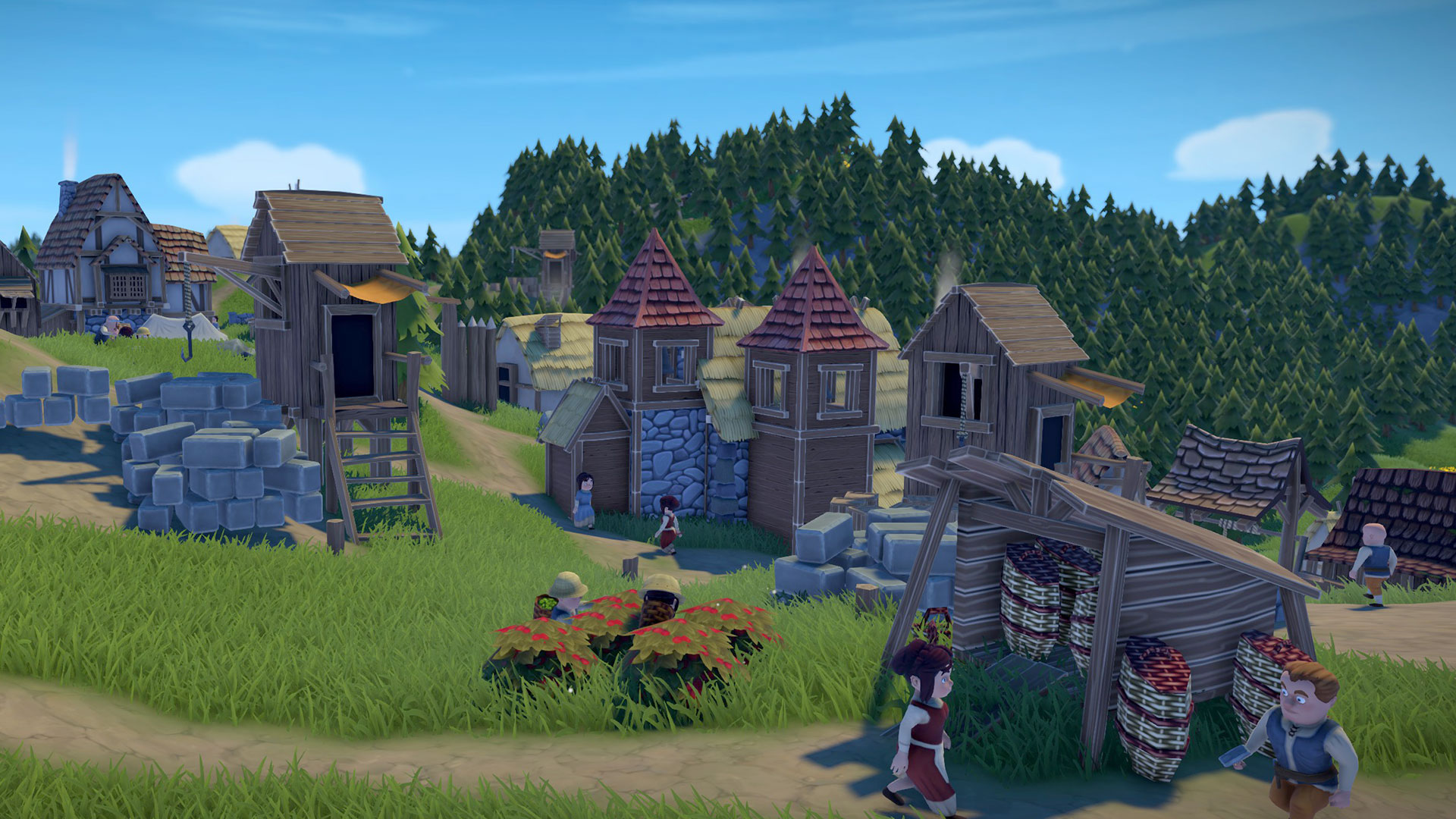 Alec: Minus 1000 coins isn’t too bad, actually. I ran into that, and ended up getting fairly involved in the not terribly transparent trading system, which eventually sorted itself out. A lot of problems in Foundation go away with patience. There’s always a solution, even if it can take a while and a lot of juggling a not-great interface to get there, rather than everyone suddenly dying in a fire or a flood or of plague or starvation. They’ll leave town if they get miserable enough, but that really takes some doing. Whatever the difficulties are, they don’t get in the way of simply designing a chocolate box town for long.

Alice Bee: It would be interesting if, say, sending a tithe to the king or the church meant a harder winter for the people. But then I don’t want to tip it into being medieval micromanagement. I love Foundation because you can just spend some time deciding how high you want the church spire to be and trust that the village is sort of taking care of itself

That whole custom building tool is probably the most fiddly of all the controls, but once you’ve figured it out it’s a joy to build things exactly how you want them. So, I have two churches in my town now. One is on the beach and one is near the market in town, and they have different spires and I mucked around the layout. One has mismatched transepts. So I imagine them each having a different, tiny history.

Alice L.: I really enjoyed the way the different parts of a blueprint click into place, once I realised it was a feature. I wanted to be able to put bits of my church anywhere at first, but I’m glad it didn’t let me, to be honest. The whole thing would’ve been a mess. I think it’s brilliant how every town will look different. I’d love to see all of ours compared to one another. 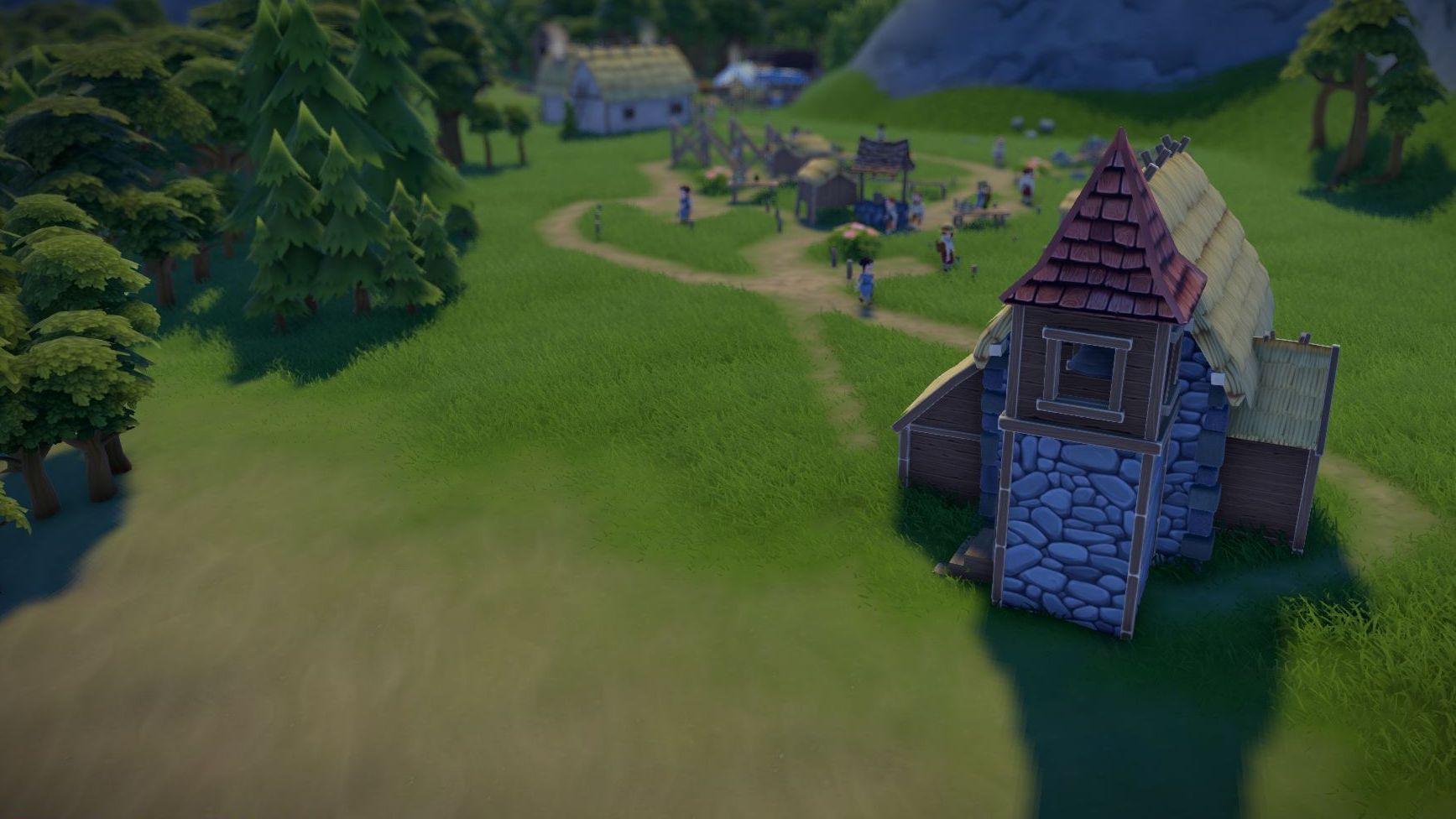 Cos we’ve been at the UI’s ribs with our steel toecaps a few times now, but it should definitely be said that, given they’ve made their own engine for this thing, the results are genuinely spectacular for an early access affair. It is such a pretty, evocative sight. I could watch the trees bob about and the grass sway forever. I’m not even sure they do bob and sway -- but it absolutely feels as though they do, so lush is the presentation of this unfinished thing.

Alice Bee: D’you know, I keep forgetting it’s in early access? I can’t wait for it to be finished.

Alec: They reckon it’s only got about 40% of the planned bits and bobs thus far. Let’s just hope the remaining 60% isn’t people burning to death or being slaughtered by invading barbarian hordes.