Regular readers will know that for a while now, I have been quietly playing Foundation, a lovely medieval citybuilder in early access, and every so often I pop in to give you an update. The last update was a stroppy one, because as part of my food production chains I was pumping out more bread than Jesus and his miracle, and yet the villagers were a) not eating it and b) complaining that they were hungry.

Since that article went up, two people have contacted me to (very politely) explain that the whole issue was entirely my fault. One of them was developer Polymorph's community manager Andy, and the other was a nice man called Brendan, who is not affiliated with Polymorph, but is just better at the game than I am.

This was my error: in Foundation, as in many citybuilders, you can stockpile items, in case you want to save up a bunch of a certain resource for trade or a building project, or what have you. Stockpiling forbids market traders from selling the item in question. I think you can see where this is going.

At some point in the distant past I set bread to be stockpiled - possibly because the Pope turned up to ask for a bunch of bread, like he famously does from time to time. And then I forgot about it. I had pictured the situation as a load of sulking idiots refusing to eat perfectly good wheat-based foods. But it would be more accurate to imagine starving villagers trudging past huge stockpiles of delicious, fresh bread, whilst I, their lord, simultaneously made it illegal for them to eat it and got cross at them for being hungry.

By sitting in my tower, shouting "why aren't you eating the bread!?" down at the townsfolk, I am therefore both a cruel and a sarcastic ruler, even if only by accident. Insert your own topical political jokes about the whole situation here.

Anyway, today I shamefacedly un-stockpiled bread, and everyone got a lot happier, very quickly.

In fact, a lot of improvements were finished in very short order today. Two rustic churches were expanded, meaning people's need to sit in a cold building and be made to feel slightly guilty was better fulfilled, and we started construction on an actual church (no rustic prefix). Soon, every villager will be part of a congregation! 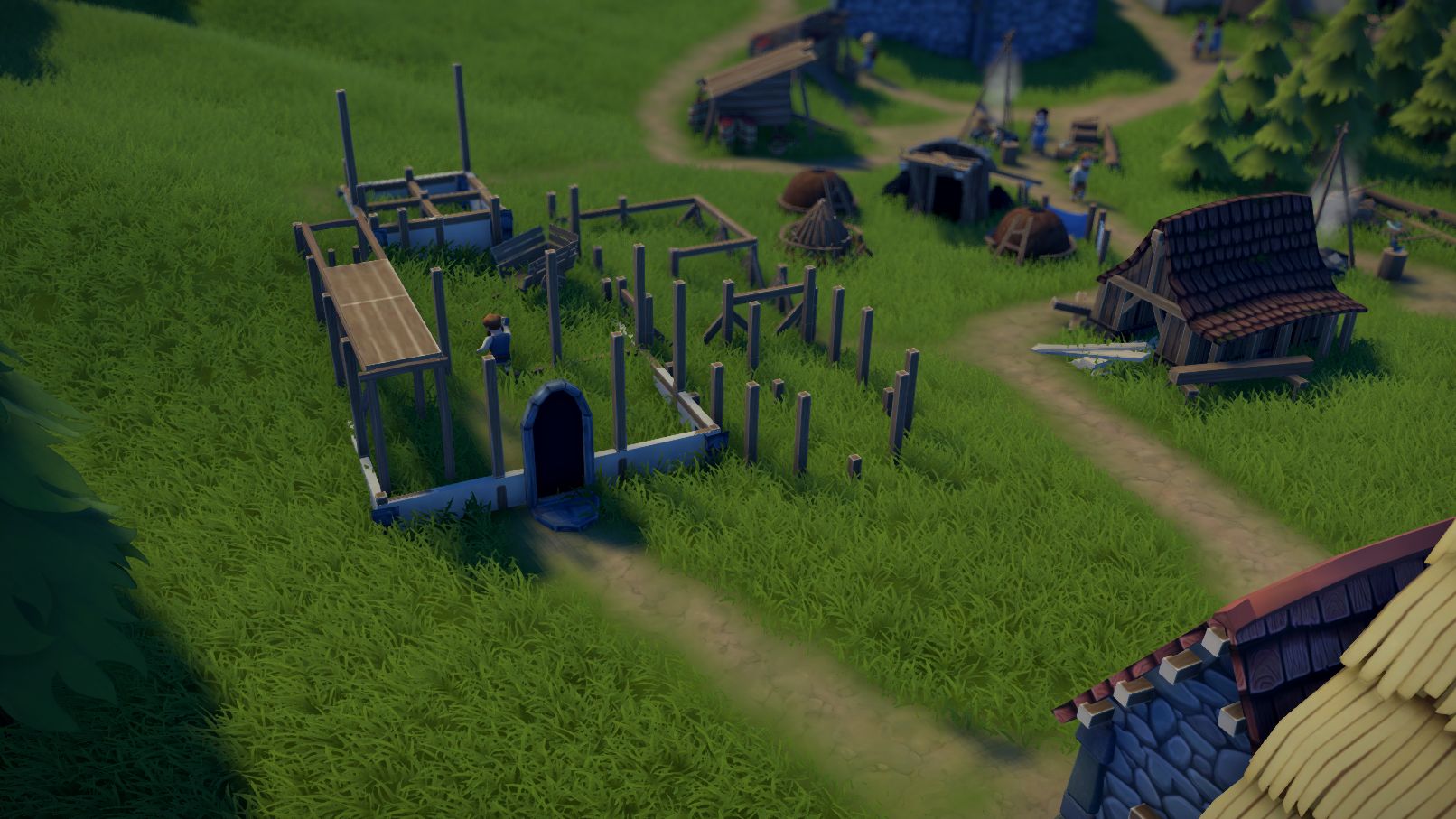 The pub has been finished as well, so this town is, basically, almost a real place now. 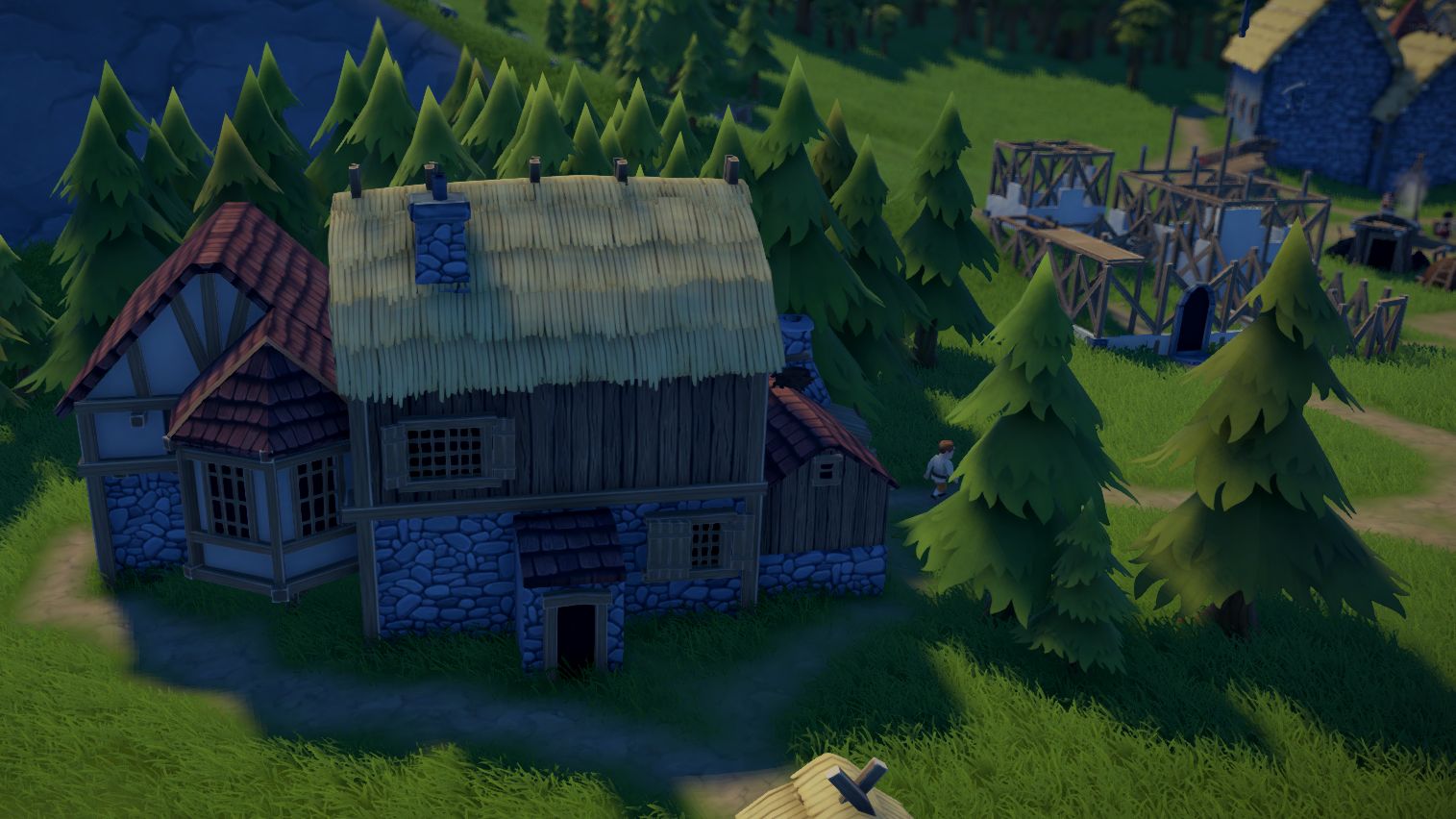 My most favourite and exciting improvement, though, is that I built a small dairy farm and a cheesemaker's building. The cows look almost terminally content. And the cheese place is particularly good for showing off the close-up detail that Foundation does so well. You can see all the little cheeses, asleep and waiting to be eaten, on the shelves. Mmm, lovely cheese.

Long term goals continue to shift. Now that the pub is finished, we need to make some cautious explorations into the fields of alcohol and hunting. As more villagers make improvements to their homes, the demand for clothing is increasing, so that production chain needs to expand too. Also, I am secretly building a tax office, but nobody tell the villagers that. They've been living in a utopia for too long. Apart from the bread thing. But that was a blip.