Samsung's Pro range of SSDs have always had a hard time in the face of their cheaper Evo counterparts. On the face of it, they're meant to be faster and longer-lasting - the very best SSD for gaming, so to speak - but when the Samsung 850 Evo and 960 Evo proved to be pretty much just as quick as their respective Pro siblings for a lot less cash, they've become increasingly hard to justify. Unless you regularly move hundreds of GBs of files around your PC on a daily basis, Samsung's Evo SSDs are more than enough for your typical gamer.

The 860 Pro is no different. Speed-wise, Samsung claims it's a fraction faster than both the outgoing 850 Pro and incoming 860 Evo with a sequential read speed of up to 560MB/s and a sequential write speed of up to 530MB/s, but in reality they're all pretty much identical. Why, then, should you consider the 860 Pro? It's all to do with endurance. 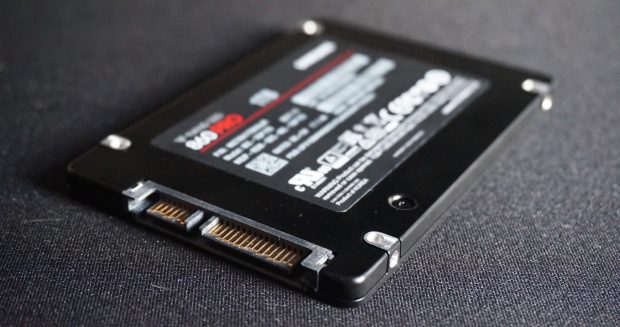 Impressive stuff, but before you get dazzled by the numbers, consider this: while the 850 Pro gave you a generous ten-year warranty, the new 860 Pro only gives you a five-year warranty. Yes, you've got significantly more TBs to play with, but it still doesn't seem nearly as good value.

Of course, much like I said in my Samsung 860 Evo review, endurance is a tricky beast to actually test when you haven't been using it constantly over a number of years. Therefore, what I can say about 860 Pro right now is pretty much limited to fast it is, which (as it turns out) isn't actually that much quicker than the 860 Evo.

It wasn't much slower, all told, but take AS SSD's 1GB sequential test, which reads and writes 1GB of files in adjacent locations on an SSD's storage. Here, the 860 Pro managed 522.08MB/s read and 489.82MB/s write. The 860 Evo, on the other hand, pipped it to the post on both occasions with speeds of 524.45MB/s read and 496.29MB/s write. That's not great when the Pro's meant to be the faster drive and enabling the 860 Pro's Rapid mode in Samsung's Magician software did little to improve things either, increasing its read speed to just 525.35MB/s and write speed to 490.88MB/s. 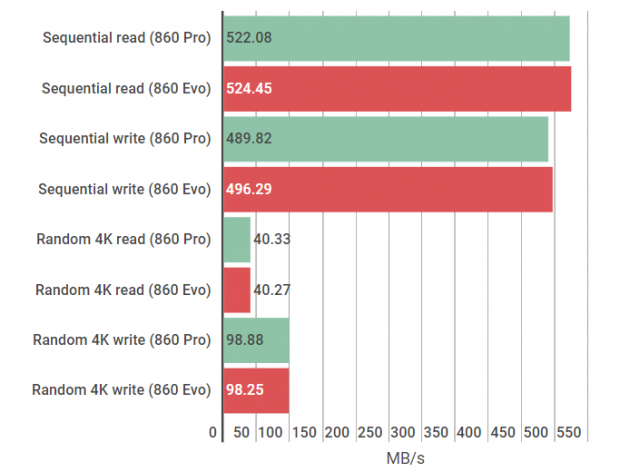 The 860 Pro closed the gap in AS SSD's 1GB random 4K test, which reads and writes 1GB worth of 4K chunks in random locations on an SSD drive, but only slightly. This is a much more accurate representation of the speeds you're likely to see in everyday use, but even multiple retests only saw the 860 Pro produce a read speed of 40.33MB/s and write speed of 98.88MB/s with Rapid mode left off, and 41.60MB/s and 100.80MB/s with Rapid mode enabled. The 860 Evo, by comparison, was just a hair's breadth behind with 40.27MB/s and 98.25MB/s respectively.

CrystalDiskMark's strenuous workstation-grade random 4K 8-queue-8-thread test painted a similar picture as well, with the 860 Evo matching the Pro on read speed, coming in at 403MB/s apiece, and edging ahead on write speed with 360MB/s as opposed to the Pro's 358MB/s.

As a result, unless you're really going to use all those extra thousands of TBW, you could save yourself a significant chunk of change by opting for the 860 Evo instead. You don't have to make any compromise on speed, and the 860 Evo's endurance is still light years ahead of anything else, making it much better value for money.

In fact, those in the UK needn't even spend that much, as Samsung's equally zippy 850 Evo is still widely available from around £80. That particular boat has already sailed in the US sadly, with 850 Evo stock growing increasingly scarce, but UK folk should seriously consider opting for the 850 Evo if you want to grab yourself a bargain. After all, while the 850 Evo may not be guaranteed for as many TBW, you still get that tasty five-year warranty, putting you in just as good a position as its successor if it happens to go kaput before you reach your capacity's maximum TBW limit. Either way, the 860 Pro just isn't worth the extra cash, so do yourself a favour and (once again) get an Evo instead.