Remember the other day when I reported that some skelly-head flamethrowers were coming to Sea Of Thieves? Well, it turns out those heads belong to four particularly deadly Skeleton Captains, who've arrived in today's Ashen Winds update. It doesn't look like it's going to be easy to nab their flaming skulls, either, as each of these Captains will use all sorts of dirty tricks to stop you from defeating them - from whipping up clouds of ash to obscure your view, to raining molten meteors right on top of you.

Rare's (sometimes) peaceful pirate sandbox didn't even have fire in it this time last year, and now look at them. Encouraging pirate arson left, right and centre.

So, these four fiery Captains are Ashen Lords, pals of the big bad Flameheart (who you may have come across if you fought those ghost ships in the last big update). You'll be able to find them on islands clearly marked by some ominous swirling red smoke, and if you manage to take one down you'll be rewarded with lots of loot - including their flamethrowing skulls.

These skulls can be sold to the Order Of Souls faction for a decent sum of gold, unlocking you some shiny new tattoos and ship liveries to boot. Alternatively, they can also be used as fiery weapons to chase down your enemies. Be cautious with how much you use these flamethrowers though, because they decrease in value with every bit of fire you spew.

There's some cool new stuff in the Pirate Emporium, too (the game's premium currency store). As always, I place a particular importance on showing you the new pets, and oh my god these new Ashen ones are so cool. 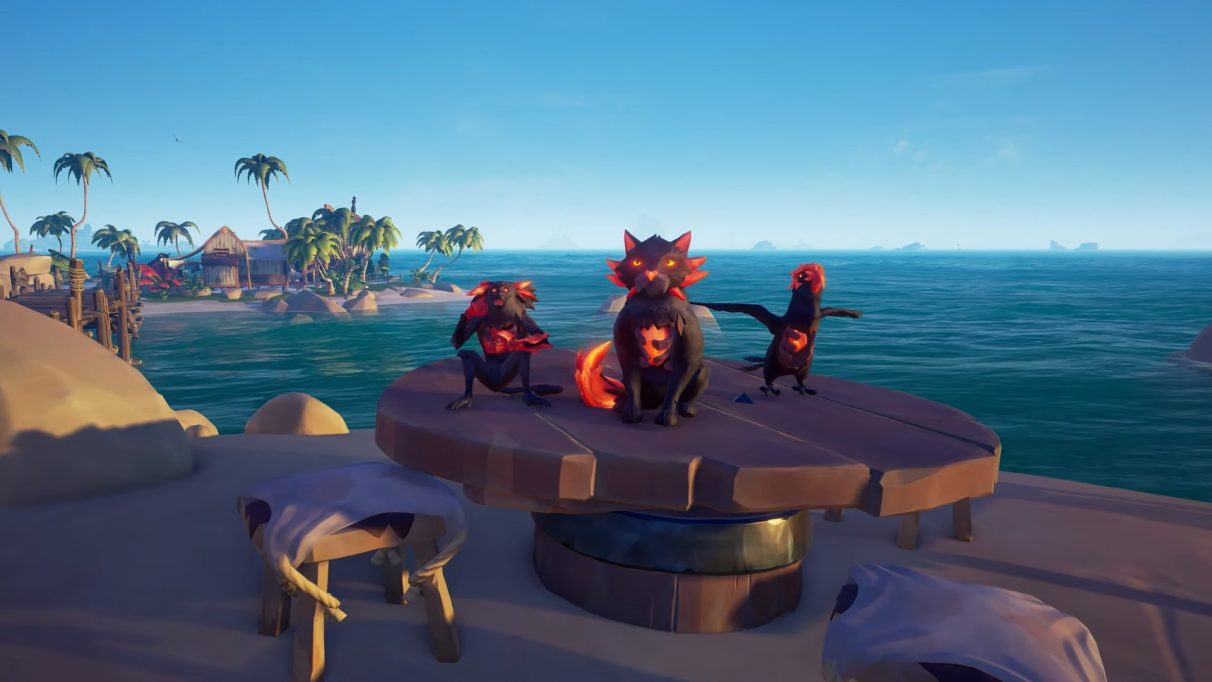 The Emporium has plenty more on offer as well, from new pet outfits to new emotes. This month's free emote is a cute little heel kick, so don't forget to grab that one when you next log in.

On top of all that, there's a new weekly event called Skull Sweep, which increases the rewards you get from turning in skulls to the Order Of Souls every Wednesday. Check out the Events Hub for more info on that one.

And last, but certainly not least, the game has got some brilliant new accessibility options to help players out on the Sea Of Thieves. These include settings that allow you to play with just one analog stick on a controller, as well as an option to have your character automatically float to the surface if you fall into the ocean.

For more details on all things Ashen Winds, check out the patch notes over on the Sea Of Thieves website.