Two pirates sit across from each other, earnestly discussing the tactics of the Raccoons. Dread Pirate Doug marvels at their ingenuity: in a past race the Raccoons found an unprecedentedly efficient way of killing themselves, giving them a head start in their attempt to board the Ferry of the Damned and light the beacon at Kraken's Fall. Throughout this analysis, two co-commenters repeatedly launch themselves from the canons of a nearby ship in an attempt to join the main crew. They make it, eventually, then politely sit down.

I'm watching a post-match breakdown for Race of Legends, a community-organised boat race in Sea Of Thieves. I'm struggling to tear myself away.

As reported by Eurogamer, Doug and his crew have been organising the races for over a year. He's prime pirate to a relatively small but passionate group of sailors, united by their desire to pit wits in a delightfully ramshackle competition. Random events plague the Sea, you see, but that's all part of the fun.

"The Sea of Thieves doesn't 'want' to be tamed and shuns structure and organisation at every opportunity", Dread Pirate Doug told Eurogamer. "The Race of Legends works because we impose just enough restrictions on the crews competing to make the races fair."

By restrictions Doug's referring to the Race of Legends code, a document that sketches out the structure of each event. In the upcoming season three, players must "retrieve a snake from the highest point on Galleons Grave". With their snake secured, they then sail off to another island where they off themselves - by exploding barrel, in previous tournaments, until those Raccoons realised it was within the rules to launch themselves from their canons at the island such that they died from fall damage.

Ship to ship combat is allowed, but only through "cursed cannonballs". If a pirate leaves their ship for any reason, though, they're fair game. 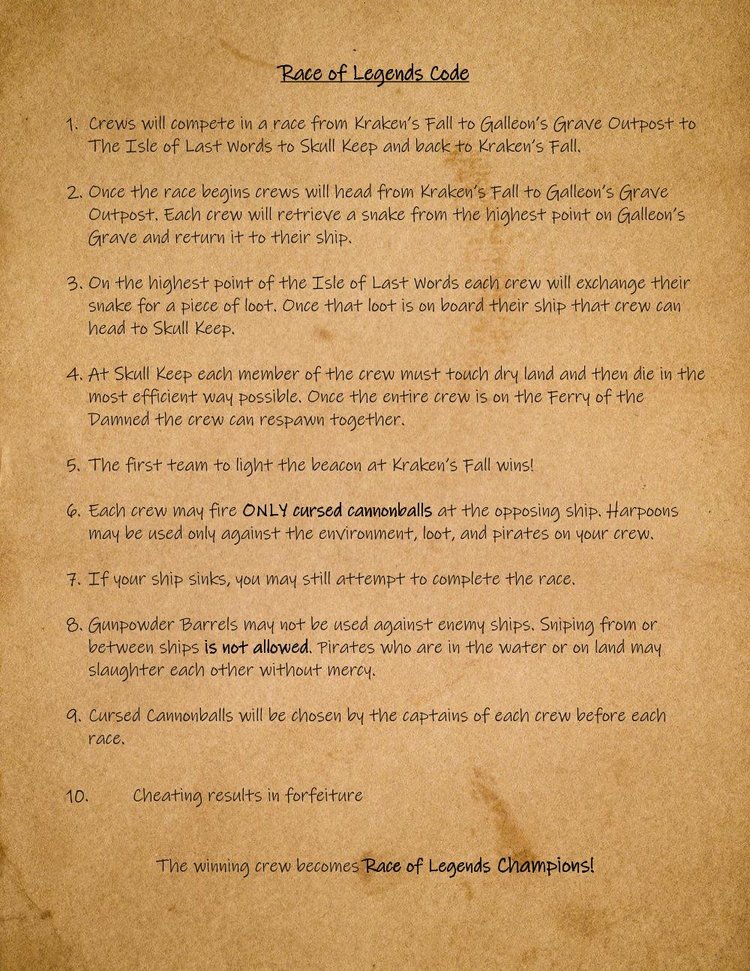 It's a fantastic example of players making their own fun in a game renowned for (at least until recent updates) not giving them much to do - or even providing pirates with private servers for this kind of shenanigan. Before every race, "between 15 and 20 players sail around looking for friendly ships willing to let us load someone onto their crew before they quit out of that server", Doug says. "Some crews are kind and helpful, but obviously some are not". It can take up to four hours, apparently, but from the outside it only adds to the charm. Take the last-ship-sailing style competitive tournament Jay covered recently. It's neat and all, but for me that doesn't hold quite the same appeal.

Oh, this is all a bit lovely. It warms my heart to hear these old sea salts reminisce about races gone by, back before the organisers decided racing three galleons at once was too much ship to handle. One of the ships once got an early lead, then put down some kind of anchor trap that lead to the other two galleons getting stuck together in the starting harbour for a large part of the race.

The full Eurogamer article is well worth checking out. You should at the very least read the part where one of the teams talks about how they're essentially onboard with mid-race kraken attacks.

Season three is due to kick off on the 17th of August. Entries are open.