I promised myself I wouldn't get excited about another multiplayer game because I don't have room for them right now, but Sea Of Thieves is launching tomorrow and here I am, desperate to leave behind my mundane, landlubber life and start a new one on the high seas. Rare also hosted an AMA on Friday, which reminded me of its impending arrival. The Q&A session was quite dry, but that's not a problem the game has.

Sea Of Thieves is obviously going to be a game best played with a crew of ne'er-do-wells, but my attempts to partner up with strangers during the beta only ended in failure, leaving me alone on an island with nothing but the NPCs to keep me company. I decided to try the solo pirate life to see how it fit.

A lot of my troubles were less down to not having a crew to lean on and more due to a lack of information. Sea Of Thieves hides more than treasure. It took me a good 20 minutes, because of some bugs and a general lack of guidance, but eventually I had myself a job and a cage in which I could house a wild chicken. Progress!

Up until that point, I'd mostly stuck to dry land, apart from that one time my sloop unexpectedly sunk to the bottom of the sea, right next to the jetty. When you set off, leaving the islands behind, you can almost taste the adventure. Or maybe that's just salt. It's exciting though! Like Assassin's Creed: Black Flag, Sea Of Thieves doesn't so much simulate sailing as it does capture the feeling of commanding a ship. The best bits, the thrilling bits, that's what we get to enjoy.

Without even a single peg-legged pal to help me out, I did start to feel like I was out of my depth. I found a wee island with some chickens no problem, and managed to capture one and store it on my ship, but it was the return voyage that would cause me trouble. Before I get into that, though, chickens! Gosh they're great. I am a very big fan of Rare's decision to not abstract the transportation of goods and poultry. You have to protect your cargo from other pirates but also generally look after it. Chickens need love. I kept mine in the nicest part of my sloop because I'm a gentleman. Do you need to sing to your feathered cargo? I'm not sure, but my chicken seemed to delight in my many shanties. 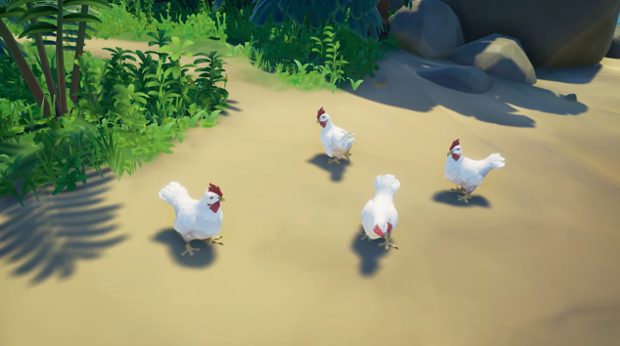 With my feathery friend safely stored in the captain's quarters, I headed back home, and that's where things went a little awry. The problem with the sea is that water generally looks the same whether you're looking east or west, and that's why I ended up sailing right into some sort of supernatural storm. The chicken was not at all pleased. When you don't have at least one matey checking their compass or climbing up to the crow's nest, it can be extraordinarily tricky to navigate the watery world.

I did eventually realise that I was going the wrong way, but getting back on track proved to be a lot harder than it was to get lost. I kept having to change roles, taking my hands off the wheel to check the compass or tug on some ropes or check on my distressed chicken. When I finally got back to the island I started on, I felt like I'd grown into a new man. I'd seen some stuff. The chicken, too. We were both hardened by our experiences.

Anyway, it was the wrong island and I had no idea where I was meant to deliver the chicken. Presumably it's still on my boat. Everything went wrong, but I'm eager to get back to mastering the high seas when Sea Of Thieves launches tomorrow. This time with featherless friends.

Joe [Neate, Executive Producer]: I think we're only ever likely to cover a few months ahead to maintain mystery (so you can be surprised and delighted) and so we can be reactive. Things will change as Sea Of Thieves evolves. We want to have the time to reveal what the features mean for players before we put them in their hands. We've taken a show not tell policy for the entire project so far and we're committed to that.

So don't expect a roadmap.

Elsewhere the team predictably defended the terrible Windows Store and promised that things were coming in the future, as they are wont to do.