I'll go into this more in my full Sea of Thieves review (tomorrow, all being well), but my overwhelming feeling so far about Rare's online pirate sim is that it's a weirdly empty and inadequate game that can nevertheless be transformed into something oddly unforgettable if you manage to crew your ship with the right mateys. I've had many tedious or irritating voyages, defined by dull repetition or sudden gankings from other players acting like, well, pirates, but every miserable moment was thoroughly redeemed by my harmonious morning with The Germans. What a perfect sailing adventure it was.

By all accounts, the very best way to play Sea of Thieves is with a crew of IRL friends, up to four of you sharing the duties of nautical maintenance, combat and treasure-hunting, chatting away over mics to assign roles, scream for help and call out sightings of Kraken on the starboard bow.

You'll bicker and blame and belly-laugh and all that good stuff, though the sword of Damocles hanging mercilessly over Sea of Thieves is whether or not that will still remain entertaining a couple of weeks from now. There are very, very few variations upon SOT's handful of key activities, and so right now it's a matter of whether or not simply providing a loose platform to have fun with your mateys is long-term game enough or not. 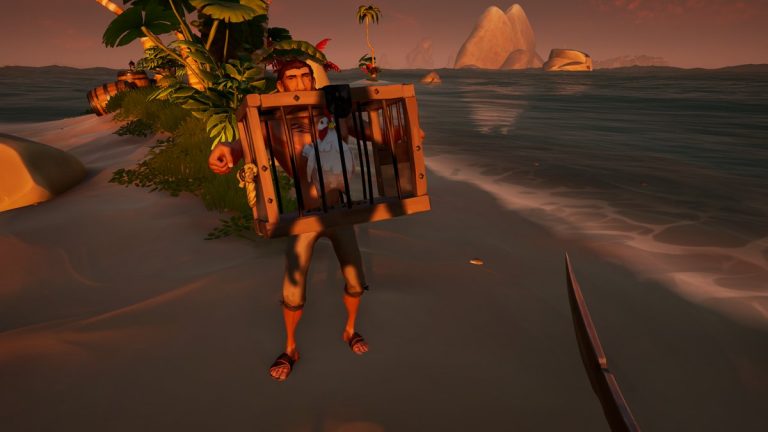 Then there's playing solo, which... well, definitely give it a shot a couple of times, as it transforms Sea of Thieves into something of an at-sea survival affair, but it's too thin and stressful to last much more than that.

In between those two stools is the most commonplace experience in Sea of Thieves - finding yourself on one of its tragically identikit boats with a crew of randoms. In my experience, this usually goes one one of two ways - either you're saddled with folk who are bloody hapless, not communicating, not bothering with sailing essentials, and generally getting themselves lost, killed or both almost immediately, or you're parachuted into the ranks of bloody-thirsty nutters who only care about lobbing cannonballs at anything that moves. Not to condemn either of those groups, of course, but playing that way does get old fast. 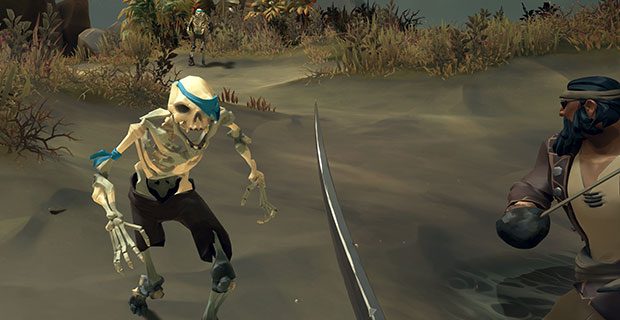 Then there were The Germans, who were almost instantly the high watermark of what I want from this game. I don't know if the two of them were friends already, or just randomly partnered, as I was with them, by the winds of fate, but certainly they did not share banter or barbs. They were professionals, two people who had teased out the core workings of a game that barely bothers to explain itself and found efficient ways to manage them.

Not, I hasten to add, to the point of cultural stereotype: it was simply that they had a very clear idea of what they wanted from this game, and it swiftly became apparent to me that this was what I wanted too. I mention their nationality only because they shared a language that I did not, and this had a fascinating effect on my own behaviour.

I chose, rather than to get linguistically underfoot, to leave my mic off and make myself useful in silence. They weren't terribly talkative either, speaking only when the situation required specific instruction to each other or to me. There would, I imagined, be time for smiles and laughter once our navigating and pillaging was complete and we were safely ashore.

My colleagues did speak some English - they flicked irregularly into it when they eventually realised that, despite my silence, I could understand and act upon instructions given in it. The only communication I would offer back is to use a handful of SOT's canned dialogue while standing in the crow's nest and scanning the horizon for trouble while they collaborated closely on wheel and sail. For instance, 'There's something in the water', followed by my plummeting to deck then turning to face whichever direction I had spied threat or treasure in. 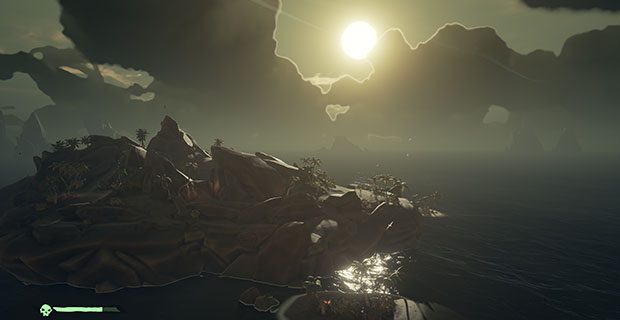 I would also solemnly mark upon our ship's map the location of the next island we were searching for, should I happen to spy it before they, as quest-setters, did. In my every action, I strove to give the impression of thoughtful collaboration, and it was understood.

I roleplayed as, essentially, a deckhand, happy to do whatever I was asked but mostly taking the initiative, tapping happily into the wordless understanding between us about when to drop anchor, turn off the lanterns, patch hull holes or check the cannons are all loaded in case we need them later. We also charged shoulder-to-shoulder onto islands' shorelines, stoically battling skeletons or refilling our stocks of cannonballs, planks and bananas. 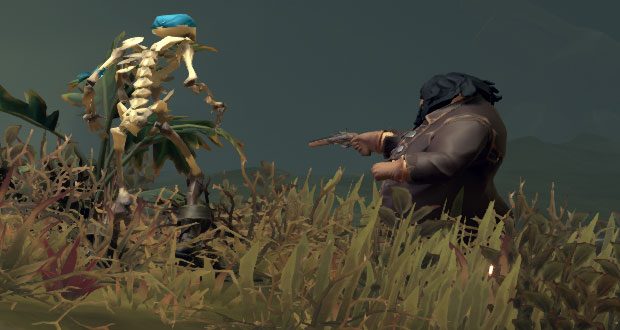 This is, really, almost all there is to Sea of Thieves, propelled onward by the Skinner box tingle of mostly futile unlocks if one acquires sufficient treasure or skulls, but our well-oiled, mostly noiseless engine turned it into something else. Turned it into the game Sea of Thieves dreams it is but usually isn't.

Unlike my more common random sessions, we did not pursue PvP trouble but instead kept a watchful eye out for it, maintaining a safe distance but manning cannons speculatively. There were no cries of relief or frustration if the potential enemy sailed on. Just a muttered 'OK' and then we would return to our usual stations, our usual jobs. And we were, mostly, pretty good at them.

We harvested far more treasure chests and skulls than I had in any other voyage, and I am quite sure that, like me, my European allies were doing it not for money, but for pleasure. Figuring out this strange, often hollow game with its simplistic but initially opaque systems, getting good at it, simmering pleasantly in the ambient escapism of it. Hauling from origin to destination then on again to the next one, maintaining and refilling as we did - it became oddly similar to the pristine American/Euro Truck Simulator, my go-to game for pure relaxation and pleasant introspection.


(N.b. the above is a video of an older voyage, not the one documented here)

Best of all, during the long, empty stretches when we sailed across an abandoned sea to a far-off island, my comrades did not object when I ran to the prow, took out my squeezebox and played maudlin sea shanties, still my favourite feature in Sea of Thieves. They did not join in either: they were too busy with wheel and sail. I'm not entirely sure they understand why I would make time for such frippery when we had a job to do, but they said nothing to dissuade me from it. Perhaps they deemed it the price of my uncomplaining compliance.

I could have talked back. I could have gotten to know them, tried to lure them into shared jokes or more ambitious escapades, told them of my own desires and intentions for and from this voyage, but it would have ruined it. The balance we had found was so delicate, their economy of action and my wordless assistance, that I did not want to risk upsetting it even slightly. I was in my happy place, ambient but involved, with the beautiful benefit of two unprotesting people to lighten the burdens of manual labour.

We returned, a few hours later, to a settlement. Our hold was bursting with chests and skulls, and we now stood to lose far too much in the event another shipful of players hunted us down, so it was only prudent to turn them all in before heading out to find more. And we were nothing if not prudent by now. 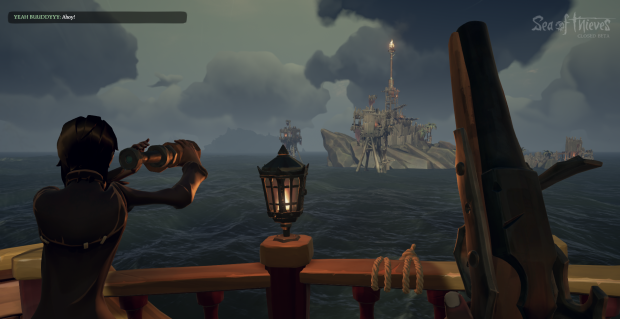 It was understood, I believe, that this was not intended to be the end, but alas my other job - this one - called. I knew this shoreleave would have to be a final one. My finger twitched anxiously above the push-to-talk key. Now, surely, would be the time to break my silence, to offer heartfelt thanks and best wishes to this peerless crew.

But no. That was not the deal we had struck. That would only open up questions, even accusations. I reached, once more, for Sea of Thieves' menu of canned lines, chose 'Thanks!' and logged off. I guess the ocean wind must have blown a little salt into my eyes as I did.