The newly v1.0 Slay The Spire, wot I called "a miracle of design" in our Slay The Spire review earlier this week, is just the start of the story. The mod scene hit the ground running when support launched last month, with the highlights being an impressive selection of new playable characters and the truly joyful Marty Feldman mode. Now we can add a whole new act to this menagerie of player-made delights.

'The Jungle' replaces the second act of Spire, dragging you out of The City and into the bestial wildlands. One of the folk behind it is the chap responsible for the brilliant Slimebound and Snecko character mods, which immediately won my attention. Also, it's got angry lions and fat rats and friendly foxes and a really very large spider. With spider-babies.

I won't claim The Jungle is quite on par with the official acts, but it makes a pretty decent fist of things. It's nice to see greenery in the background, instead of the usual blues and greys, but the artistry does harken back uncomfortably to Spire's earliest, more visually rudimentary days.

We also get a full set of new enemies: a few have nods to existent beasties, such as Snecko Cultists (mini-Sneks, basically, complete with the ol' Confusion shenanigans), and a few are Spire-uncharacteristically straight from our Earth.

The creature art is a mixed bag, e.g. these Jungle Hunters could fit right in on any other floor of the Spire: 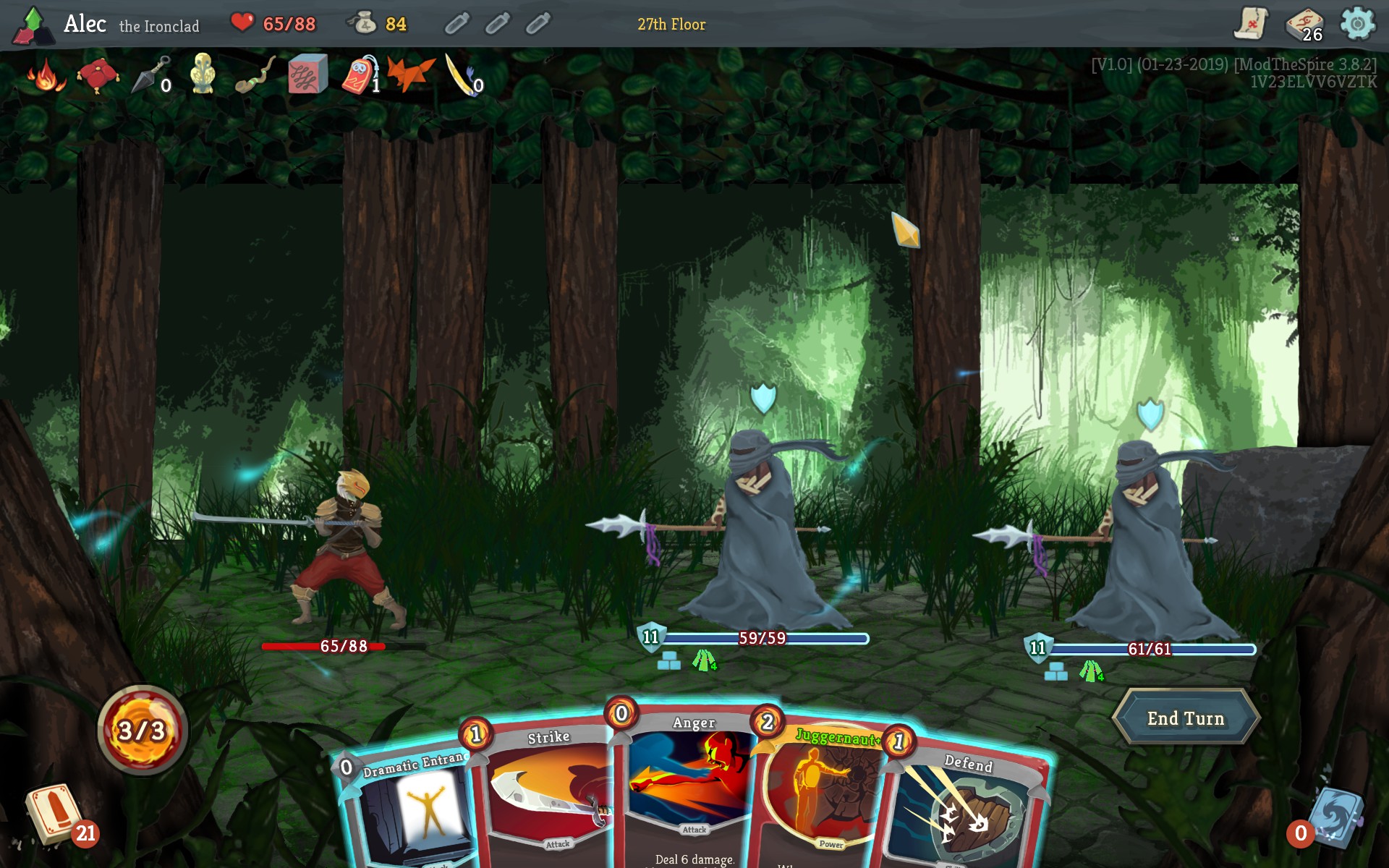 ...but I'm pretty sure I've seen this lion in one of my five-year-old's sticker books: 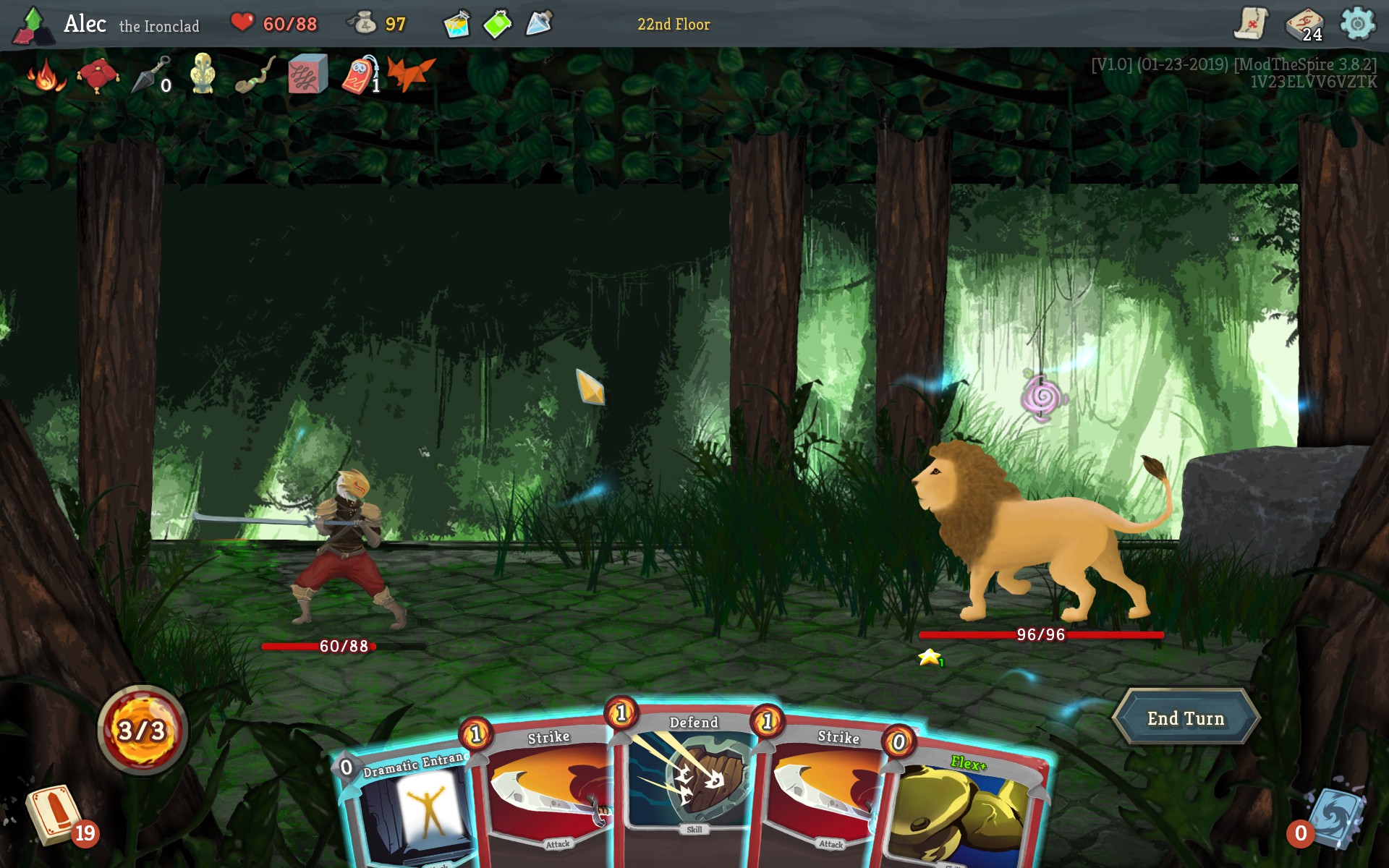 However, it's important to note right here that, amazingly, The Jungle "was the product of a collaboration effort over 3 days by 21 modders in the first-ever Slay the Spire mod jam, performed on the 1-year anniversary of ModTheSpire's creation."

3 days! It's unbelievable that it works as well as it does. So complaining that the lions look a bit crap is a dick move on my part. But I say it with love: the foundation here is so strong that I dearly hope it gets tarted up some more.

There are some jaunty new narrative/choice interludes too, such as deciding whether or not to break the heart of this spirit fox: 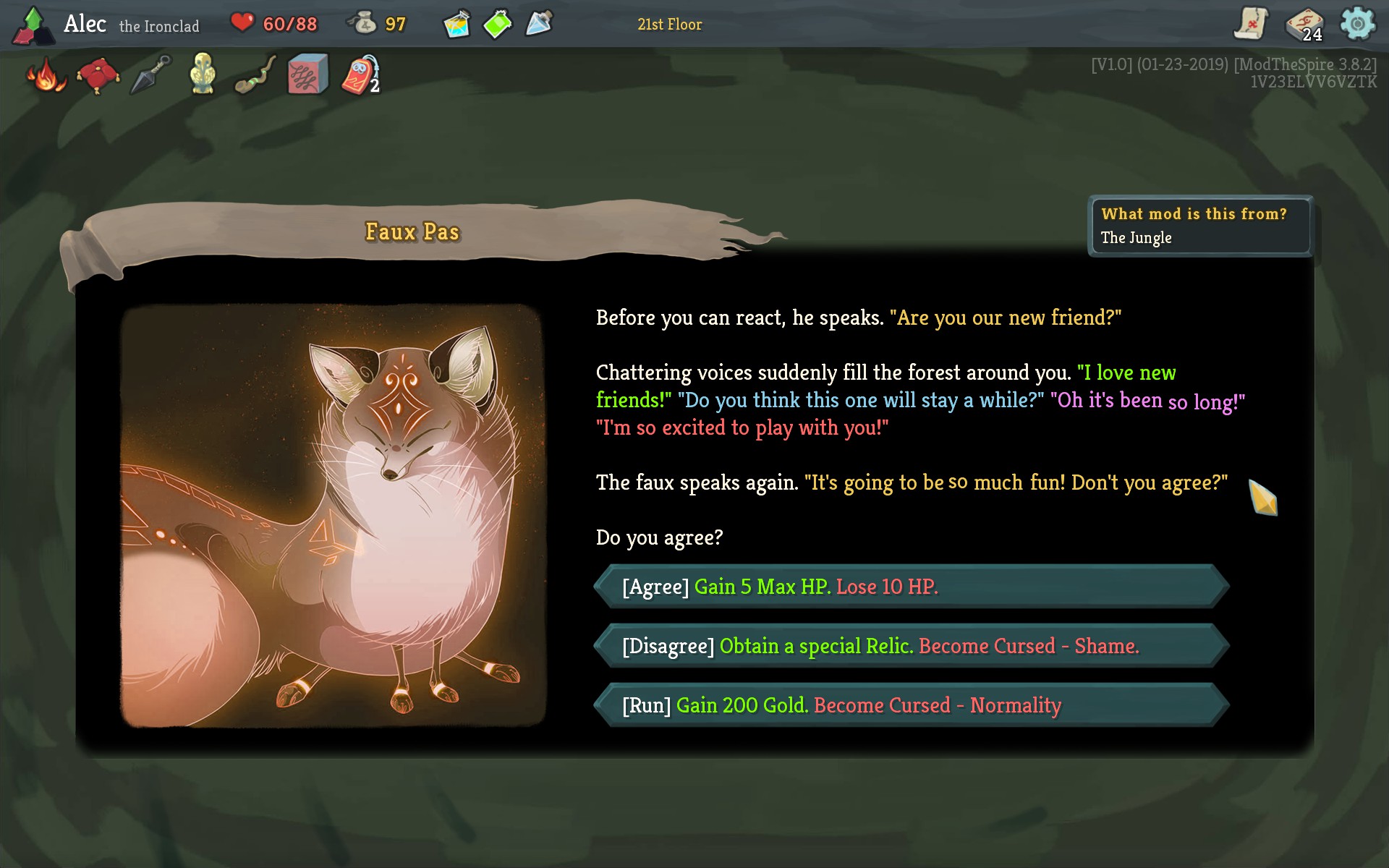 It all culminates, just as in any other Act, with a big, brusier boss. I've only seen one of its multiple new mega-threats so far, which was a Cobbett-traumatising, tree-sized spider that hides behind its web-spewing spider-babies. 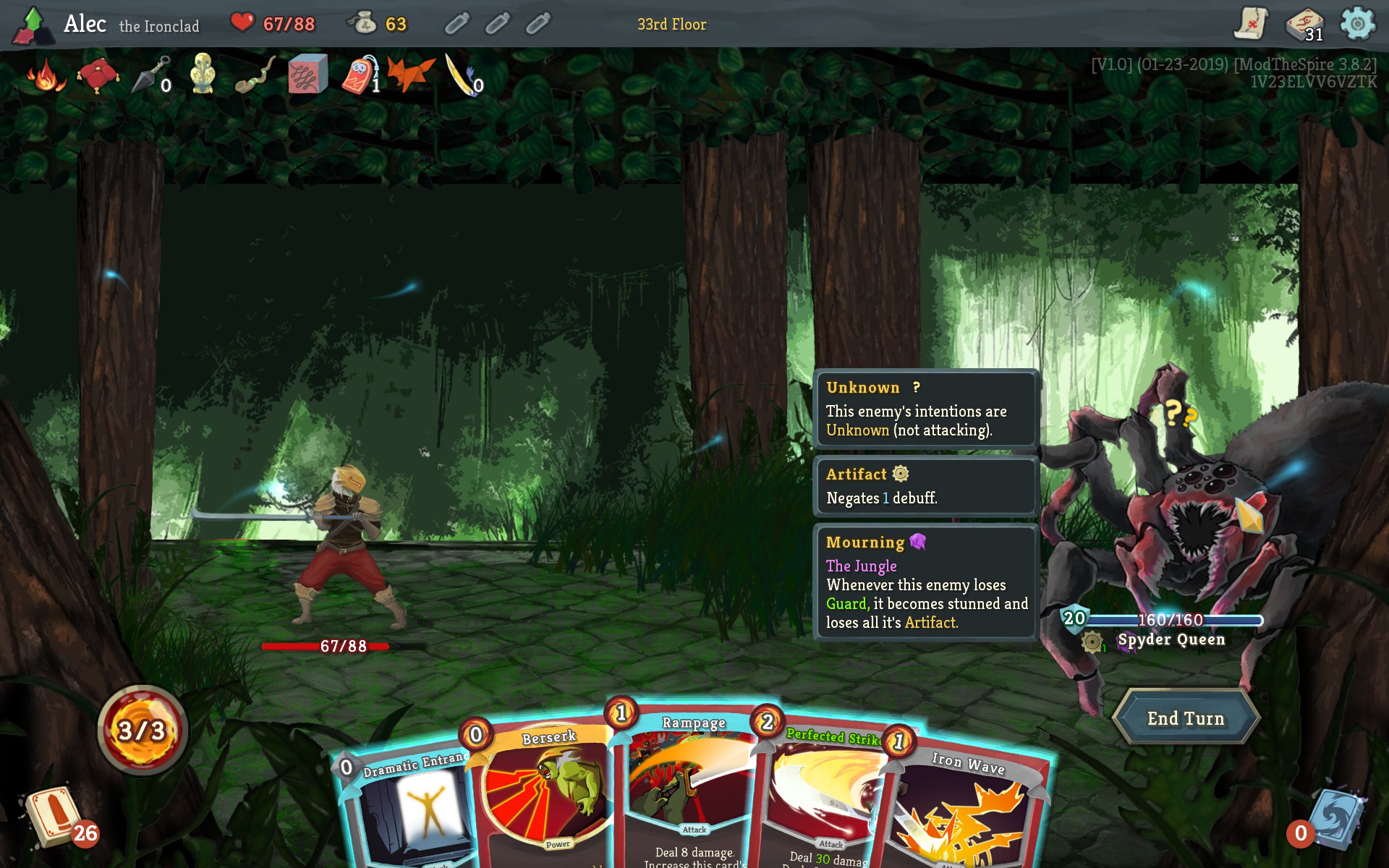 I found it to be fairly well-judged and survivable - the main twist is that Mama Arachnid takes 80% less damage so long as it one or more wee'uns in front of it - but I've noticed a few comments complaining that one of the other bosses, The Totem, is a bit more Act 3 than Act 2. I look forwards to getting roundly ganked by it soon.

You can grab The Jungle by subscribing to it via the Steam Workshop here, but note you'll also need ModTheSpire, BaseMod and StSLib if you don't already.

Launch Spire as 'play with mods' when prompted, select The Jungle and three wotsits above from the next screen, and then once you've completed Act 1 you'll be asked if you want to carry on as usual or divert to The Jungle. If you survive The Jungle, you'll then progress to Act 3 as per usual.

Great stuff. More of this sort of thing, please