Premature Evaluation is the weekly column in which we explore the wilds of early access. This week, Fraser's pretending to be an NPC, badly, in the asymmetric game of spies and snipers, SpyParty. How do you get blood out of a tux?

Nerves already shot, I extract myself from the conversation I’m using as cover and head towards the golden statue, my prize. This plush apartment houses more than a few pieces of art I can pinch, but this one is out of the way, somewhere I’m pretty sure nobody will be looking. I empty my brain and follow the path I’ve settled on in my head. I’m following a script with the single-mindedness of a machine. Or, more accurately, a SpyParty NPC.

I’m almost at my destination when a spanner is flung into the works in the form of a booze-swigging ambassador, sauntering over to the shiny eagle I intend to make away with. For a split second my brain fires up again. I’m not a machine; I’m a startled person who has to briefly recalculate, and that’s all it takes for the laser sight to swing over to me. Pop! My spy career is over. 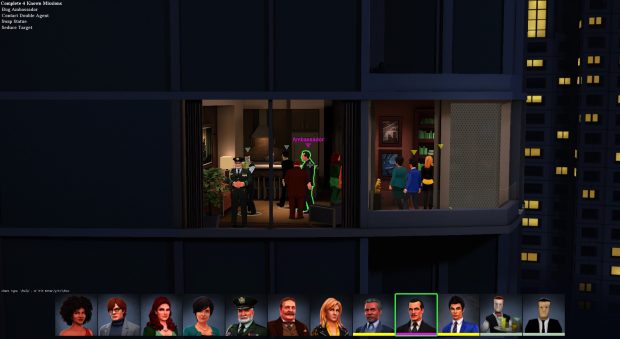 SpyParty is a game of life-shortening paranoia and tension. Though you're operating on a knife edge, it demands that both players - the eponymous spy and their nemesis, the sniper - shrug off the tension and commit themselves to completing their tasks with a laser focus. For the spy it’s a list of typical sneaky shenanigans, from bugging ambassadors to contacting double agents, while the sniper has a single objective: kill the spy. But to actually figure out who the spy is, the sniper has to create a list of suspects, memorise the room and generally keep their eyes peeled for even the slightest discrepancy. Neither of them has an easy job.

While top notch observational skills are attractive traits for both prospective snipers and spies, the roles are still wildly different experiences. The spy game is a stressful race against the clock where, whatever you do, you can’t rush. When that laser focuses on you, it’s like having the Eye of Sauron bearing down. Reacting means death. Maybe the sniper is trying to elicit a reaction. The other guests can’t see the eye's dread gaze, and if you want to survive, you’ve got to pretend that you can’t either. 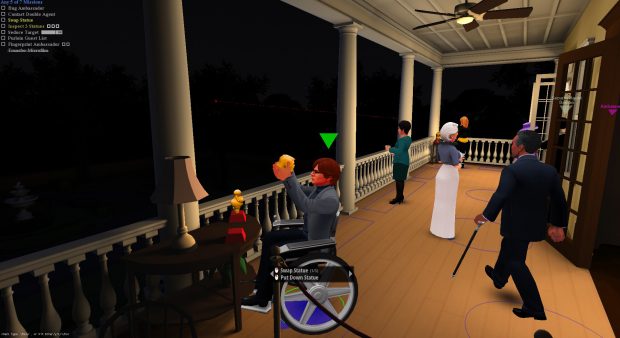 There are so many ways to draw attention to yourself. Stopping outside one of the interaction zones - circles for conversations, squares in front of objects - is as good as screaming “I’m a person!”, while hovering around VIPs looks pretty suspicious. I expected to doubt myself more as the sniper, trying to guess which of the colourful characters was more than code, but I couldn’t escape my paranoid inner voice for even a second as the spy. It felt like I was giving the game away with every movement. The last time I was this self-conscious I was going through puberty.

It would almost be too much if SpyParty wasn’t also unexpectedly playful. You’re a mimic, pretending to be someone else, nicking priceless artefacts and seducing diplomats, generals and even a bloke in a stetson. It has everything a caper needs. And though the invisible sniper might be an intimidating presence, looming over the party, there are a few ways to infuriate them and make it harder for them to find the true spy. 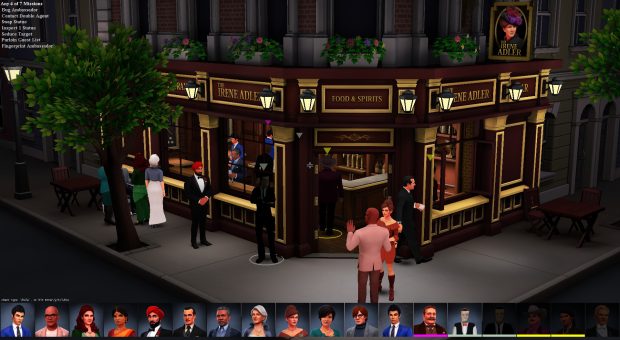 The sniper’s the one with most of the power, however, and it’s disquieting. They’re the only character who can kill, and that single bullet ends the game, one way or another. Hunting down the spy is a creepy, methodical process. You can highlight and lowlight characters - maybe because of your gut, but more likely because you’ve noticed them doing shifty things - and on the bottom of the screen is a list of every guest and employee, showing you who you’re suspicious of and who you’ve cleared. Who gets to live, and who might still die. I’ve got a terrible memory, so I’ve been inspired to take my own notes, too. These hand-written scribbles about potential targets probably look a little incriminating. 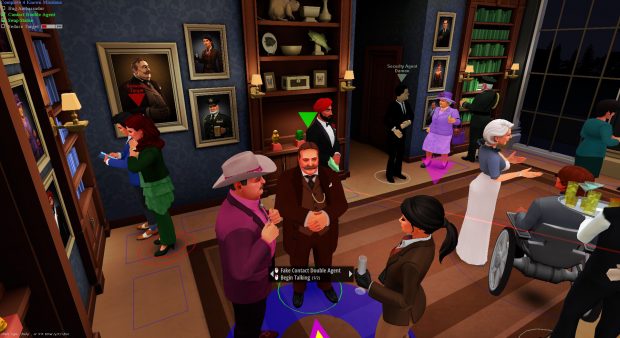 So far, I’ve been a lot more successful as a sniper. Though I’m not afforded any mistakes, I’m not vulnerable either. And while there’s that list of suspects to worry about, and plenty of other things to keep track of, having that single, overriding goal makes it all a little less daunting. The spy has a lot more objectives to complete before they can escape, and every single thing they do runs the risk of drawing the sniper’s attention. Planting bugs, trading microfilm, sneaking notes - they all have tells that might make you a target.

I’m not sure if that will continue to be the case as I attempt more complicated missions. The moment you add more NPCs and potential objectives for the spy, the sniper’s job becomes a lot harder. If the spy has seven objectives but only needs to complete four to win, you’ll end up looking for tells that might not even appear, or keeping an eye on a diplomat who will be completely ignored. The chase becomes more frantic, more desperate, and that’s when civilians get mistaken for spies. 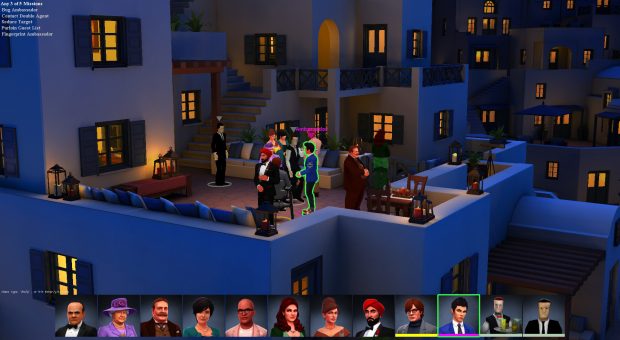 All 10 of the small levels feel as if they've been designed with equal attention paid to each of the player roles. As a spy, they’re condensed Hitman levels; tiny sandboxes full of things to interact with and NPCs to dance around. Some are open spaces where you constantly feel like a target, while others have nooks and crannies that offer a false sense of security. Those same levels become elaborate sniping dioramas when you play from your perch across the street. I’ve never spent so much time thinking about the shape of a room before. SpyParty uses depth and angles to subtly obscure - and create opportunities for the spy - while still making the sniper feel like they are omnipresent.

In one of the levels, there’s a partition between the front of the room and a row of statues. It’s a great place to bug the ambassador or swap a bust because, when the sniper’s facing the front, they can’t see whatever shenanigans you’re getting up to behind the wall. As a sniper, though, I became obsessed with that spot. It was so tempting, I knew the spy would eventually use it. But… what if they knew I knew? Maybe the most suspicious guests are the ones avoiding that area. But then I wouldn’t be expecting it, so the spy would definitely use it! Unless that’s exactly what they wanted me to think. 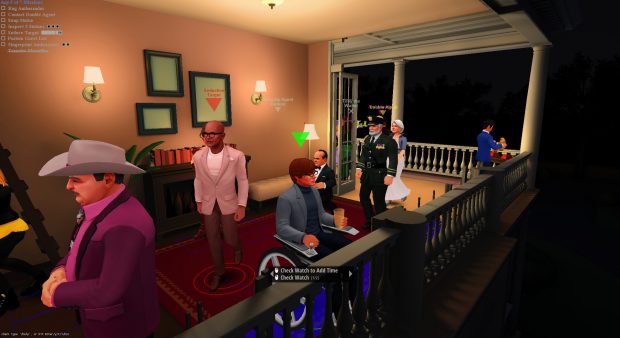 While SpyParty has all the hallmarks of a great local multiplayer game, the distance it creates between players seems to be so integral that I wonder if it’s not better suited to online play. The distance and limited interactions breed tension, and a lot of that would be shattered if you could see and hear your opponent. More importantly, in the gap between the players lies another adversary. SpyParty is as much a duel against your own personality. Your doubts, confidence, your gut - they’re tools and obstacles equal to the bullet.

SpyParty makes me unsure about almost everything, but I’m certain that it’s one of the most immediately gripping early access games that I’ve played since I started prematurely evaluating them. It’s still got around two years left before it leaves early access, but it’s already been in development for almost a decade and feels more cohesive as a result. It knows what it is, and it does it very well.