This is The Mechanic, where Alex Wiltshire invites developers to discuss the difficult journeys they’ve taken to make their games. This time, SpyParty [official site].

If Chris Hecker was going to make a mistake with SpyParty, he wanted it to be the opposite mistake to the one Spore made. The way Hecker sees it, Spore’s problem was that it was all accessibility and no depth. And he’d know because he was a lead engineer and designer on Spore. So when he began to make his own game, SpyParty, which after eight years of development has finally hit Steam Early Access, he said to himself, “I’m going to go really hard on the depth.”

And so Hecker did, putting enough depth in this asymmetric two-player competitive game to satisfy 1000 hours of matches from its most dedicated players. But it’s not enough. He wants to push SpyParty to becoming 5000-hour game, and the way he plans to do it is by building his characters.

And why isn’t 1000 hours enough? ”I’m just fascinated by this depth thing,” Hecker tells me. “Go is my favourite game, with poker and chess, really deep games that can absorb a lifetime of study, and it’s not that I want someone to play my game 10 hours a day for 100 days. I want them to play half an hour a day for years. I want a lifetime study thing, to make a game worthy of someone who wants to do that.” 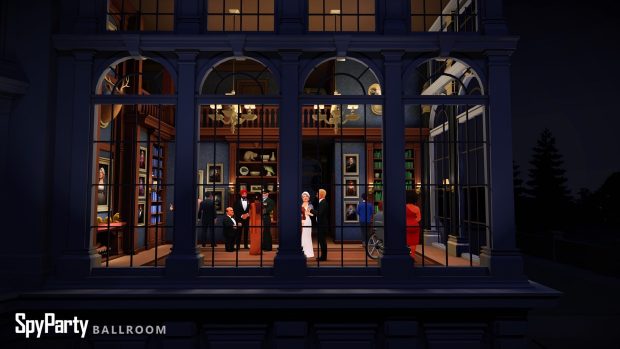 If you’re taking your first glance at SpyParty and you’re wondering how on Earth it could be talked about like this, it’s understandable. In fact, its basic premise is pretty simple. One player plays the spy, and the other plays the sniper. The spy is a guest at the ambassador’s party and must carry out a series of shadowy tasks like stealing guest lists and transferring microfilm while mingling with the AI-controlled characters. If they can carry out their list of tasks before the clock ticks down, the spy wins the game. The sniper, meanwhile, watches the party from afar through a pair of binoculars, attempting to read the behaviour of each party-goer in order to identify and shoot the single human one with their rifle. If they’re right, they win the game.

The depth comes from the layers of deception and subterfuge that bubble up from this setup. For beginner players, the spy has the advantage as the sniper gazes in, overwhelmed by the challenge of tracking the behaviour of multiple guests. But then, once the sniper realises that they can ‘camp’ one of the spy’s tasks, such as one in which they must exchange a statue for another, by exclusively watching them, the game becomes easy for snipers. Later, as players start to play the intermediate skill level, the game switches back towards the spy’s favour as their task list becomes a set from which they only have to perform a certain number and not all of them. Now it’s far too risky for the sniper to only camp a single task, because the spy might never attempt it. 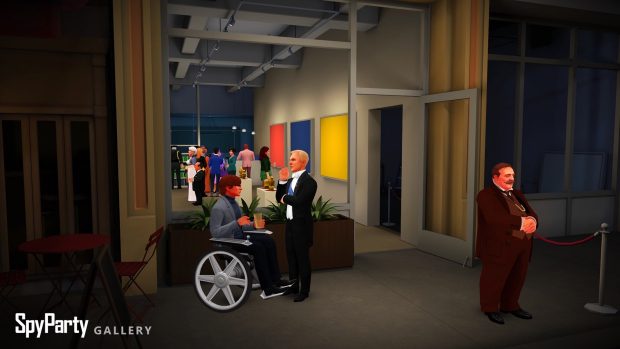 At its highest skill levels, SpyParty’s depth is reflected in subtler strategies and concepts. If the spy has chosen to play as the gentleman with the cane, then the sniper knows that if he tries to plant a bug on the ambassador with his cane hand, the animation is almost impossible to see. Thus, if the sniper sees the gentleman with the cane passes the ambassador on the cane side, they’ll be suspicious. Similarly, the spy might choose to play as the dwarf character, Mr. S, on the Gallery level, which is a long corridor in which the guests tend to block the sniper’s view. Mr. S is short enough that he’s continually obscured if he stays at the end of the room, leading the sniper to immediately assume he’s the spy. On the other hand, perhaps the spy will therefore choose another character on the Gallery level to lead the sniper astray? For every play there’s a counter.

Several years ago, Hecker had a big idea for expanding SpyParty’s strategy. Each character would have a number of specific behavioural tics, so one character might take a drink every time the waiter passed while another would never take one, or perhaps another would spend a lot of time looking at pictures on the walls or staring out of the window, and spy players would have to emulate these behaviours to keep up the deception. 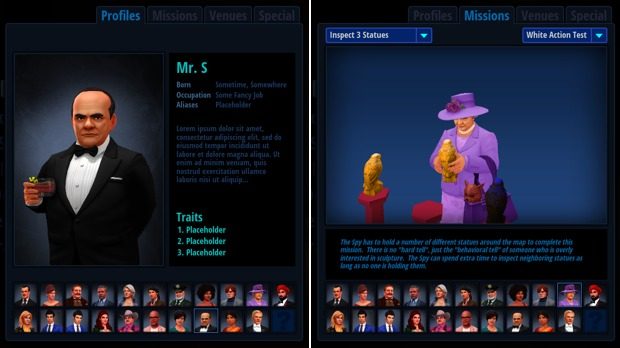 It seemed a great idea, because it was exactly how everyone who learned about SpyParty expected it to work. “I rejected the idea because it was too complicated,” says Hecker. He didn’t think anyone would want to learn every character’s traits. But then League of Legends and Dota appeared. “These incredibly deep games about incredibly complicated characters - there’s so much stuff to know,” he says. “They have a 120 characters [LoL currently has 140, while Dota has 115] and you’re supposed to know what they can do. There’s so much knowledge at the elite levels that people are willing to learn and it made me realise that there’s not really such a thing as too complicated for a competitive multiplayer game.”

Hecker realised that the real challenge was not complexity but making it accessible. “As long as you don’t have to read the book before you start, and as long as you’re motivated to read that book as you play more and more, then I think everything’s going to be OK.” And so one of SpyParty’s big new features will be traits, which will give each character three characteristics that will govern their responses to certain situations. Hecker’s still compiling the list, but perhaps there will be teetotallers and drinkers, characters who don’t like talking to others and those who can’t bear to be alone, and those who make NPCs tend to walk away when they join a conversation and those that attract them. And to help players remember who does what, they’ll be listed in the Dossier, which will pop over the game screen during a match, obscuring what’s happening but delivering important information. 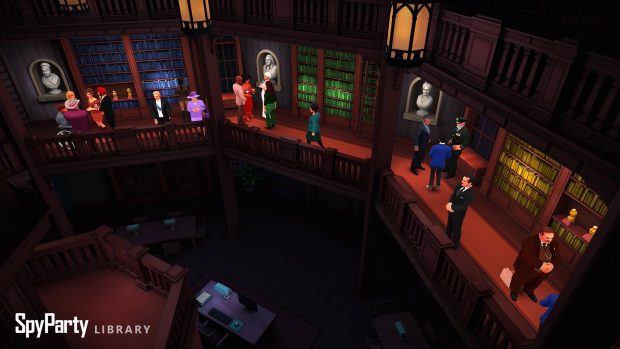 On a fundamental level, the traits system will nerf spies because there’s little upside to having to perform their actions, while the sniper gets more potential clues to watch for. But there’s always room for subterfuge. If your character’s a drinker, for instance, they’ll often have a drink in one hand which will mean they can’t pick up statues or bug the ambassador while passing them on that side. “That makes it so you don’t want a drink as the spy. But it also makes you also want to take a drink as the spy because it makes you less suspicious. And if you’re near the ambassador and he’s on your right and you have a drink in your right hand, the sniper knows you can’t bug, and they’re maybe thinking that you won’t bother trying that.” So maybe you’ll try.

But why nerf spies? At the moment SpyParty’s elite players tend to play games with rules biased towards snipers around 60% of the time, while lower ranked players tend to play rules that favour snipers around 55% of the time. There’s some discussion in the community as to what’s causing this, but Hecker’s working theory is that it’s more fun to feel like the underdog if you’re the spy. You feel that your actions are instrumental to both winning and losing because you’re the active player. If you’re the sniper, though, you can feel helpless when things aren’t going your way. 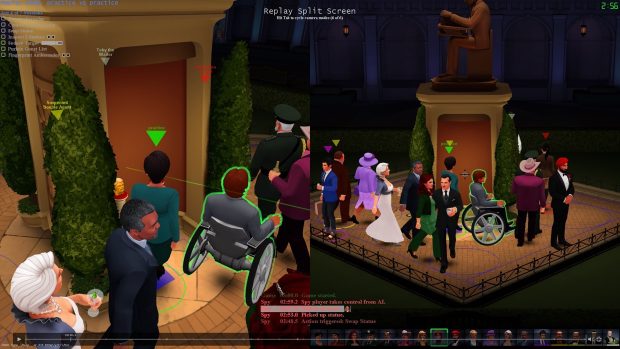 So while traits are partly designed to add complexity to the game, they’re also designed to give the sniper more to work with, and the spy more to have to juggle. But to balance out their effects, Hecker’s also working on a second feature to add to the game. Recommendations are a mechanic by which the spy can get into a conversation with NPCs and tell them to go and look at statues or stare out of the window, adding a wave of noise to the sniper’s careful surveillance. If they’ve been noting which characters tend to look at statues, now a set of NPCs who wouldn’t normally look at them come along and muddy their data. On the other hand, if a group of characters all suddenly make a beeline for the statues apart from one, maybe the spy has just exposed themselves?

Hecker is also considering a third feature which he calls crazy, and he’s not sure it’s going to work at all. Here, the sniper gets a tool to directly affect the party by asking the security guard to interrogate a nominated character and ask them a set of questions, such as ‘What do you think about the statues,’ in return for putting an extra 30 seconds on the clock. If the spy gets interrogated, they’ll have to remember or bluff their way through the questions. “So you have to quickly think, have I been to statues? It might be another way for the sniper to poke in at the party and change how things are going.” 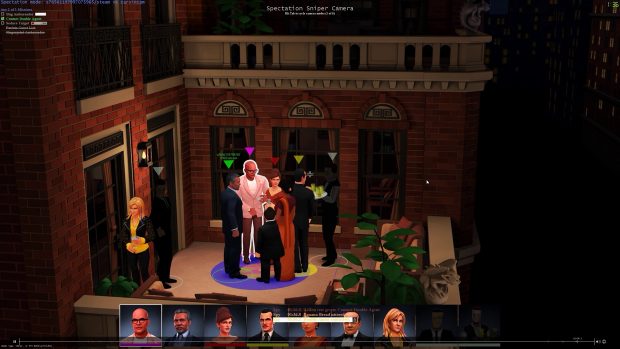 Hecker’s really not sure whether it’s a good idea. But he’s forcing himself to be brave with the game. He knows his hardcore players are generally behind what he wants to do: “They think it’s cool because it’s a big game design change and they think pretty much that recommendations are going to work, but some are nervous of the spy-nerf aspect of traits.”

But he’s also been nervously watching disputes blow up around other games when they’ve been updated, from PUBG to Darkest Dungeon. “But traits is such a cool idea and it plays so well with the recommendations so I’m going to do it, and if I end up having to yank it out, it’s like, oh well, that’s how game design works. I have some nerves of doing this kind of thing now that lots of Steam players are now playing, but I promised myself that I’m not going to hesitate to make big changes, because I want the game to be even deeper and better.”

SpyParty is in early access now and available direct from the developer or on Steam.