Tempting tempeh! Tempura templars! Temerarious temperatures! It is unclear at present whether Temtem is a contraction of anything, and what exactly it means if it is, but this Pokélike is the brand new catch ‘em up from Spanish studio CremaGames.

Temtem is an unashamed rip-off of Pokémon in almost every respect, but that’s why it’s good. It’s an homage to Pokémon before it was Pokémon, the 25-year-spanning, $900 million dollar-grossing mass entertainment franchise plastered across every schoolbag on Earth. Temtem is still just Temtem, first of its name, estranged child of multimedia mammoth and heir to legions of PC players who have been sweating for an MMO collect-‘em-all since the first time they saw the chunky electric mouse do a lightning bolt.

There’s much more to it than that, though. Temtem is consciously contemporary in some important and affecting ways - much more so than Pokémon proper. Instead of the infamous “Are you a boy? Or are you a girl?” opening question, Temtem asks you to choose He/Him, She/Her, or They/Them pronouns. You get to sample a bunch of run animations, which can be very robust, like a cartoon Usain Bolt, or a bit more fun and flamboyant. It gives you room to inject your full person into your character, to the extent that I spent a solid 15 minutes customising mine. 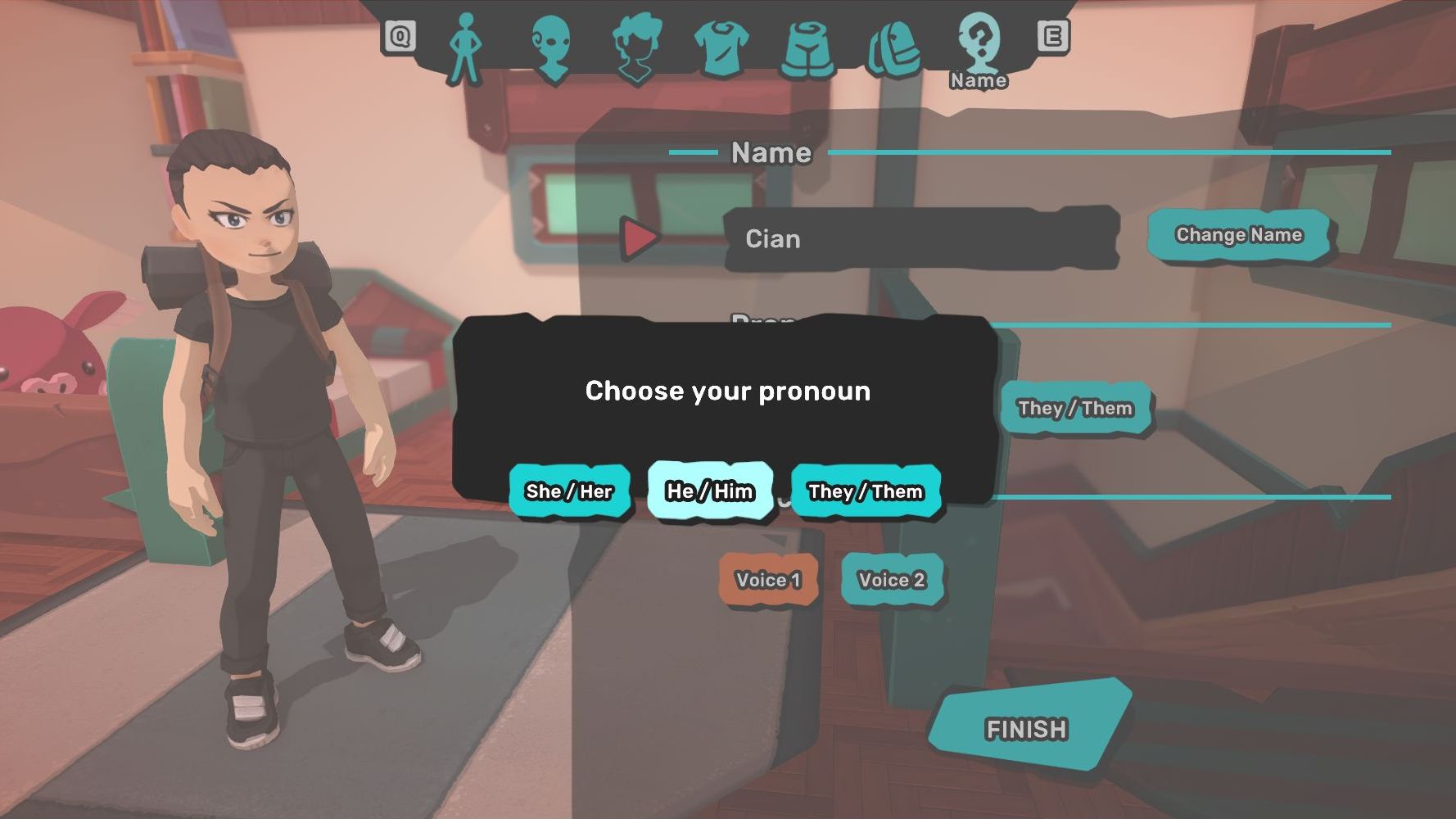 Make no mistake though: the DNA of Pokémon is strikingly visible from the get-go. After booting up Temtem and making your way downstairs, you’re faced with the totally original, in no way inspired by anything choice of three different starter Temtem. Once you’ve made the impossible decision - I see you Houchic, with your huge 2006 emo energy - your rival, Max, immediately challenges you to a bare-knuckle scrap, except said scrap is between your Temtem, who may or may not have actual knuckles.

After you inevitably lose the fight, the very friendly Professor Konstantinos explains that it’s alright. Max, who is a legitimate dick, had access to a stupidly powerful Temtem and you only had your little baby starter with me. Side note: Konstantinos tells you where he got each of the starter Temtem from, and Smazee, a sort of punchy monkey, was won in a bar fight. Is Temtem just Pokémon with snapped pool cues? Is Francis Begby the Temtem League Champion?

The rest of the introduction follows suit, i.e., the one bought from Pokémon's tailor. You run through the tall grass, which you weren’t allowed to play in before, and you start to find wild Temtem - “untamed” in this case, as Temtem is the world’s most thesaurus-derived product of all time. Pokémon are Temtem, obviously. Your Pokédex is a Tempedia, PCs are TemDeck Stations, Potions are Balms, instead of a Trainer your're a Tamer. You get the gist. 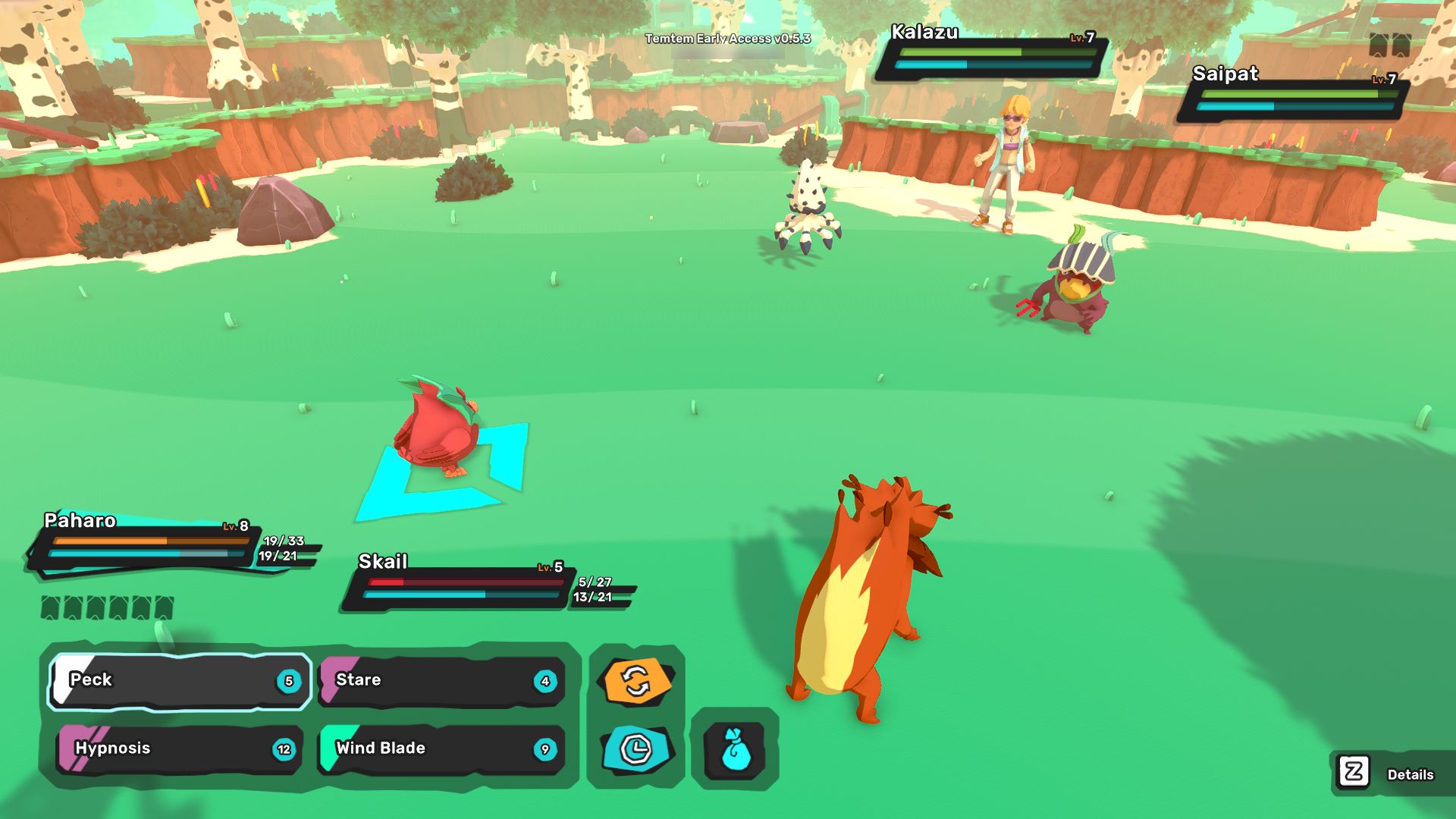 However, it’s more than just a copy/paste of Pokétropes. Temtem is different to Pokémon, but that distinction is more temporal than anything else. Obviously Temtem is aesthetically similar to contemporary Pokémon, with big bold colours and anime-adjacent styling, but at the same time it’s tonally divorced from it.

It eschews the makeup of the polished Pokémon we see today in order to recapture what made the series special back when you used to leg it home from school to watch the TV series, and see Ash getting thrashed by Brock (imagine losing to Brock). Temtem has all the magic of Pokémon’s world, from offering you the ability to befriend curious quadrupeds to commanding said quadrupeds to claw-punch those of other ten-year-olds.

This is mostly visible in dialogue - for example, after you beat three grunts from the to-be-expected enemy Team insert-silly-word, you can slag off the next challenger by saying “You’re, like, the fourth one to try.” But it’s also to do with the wonder of having to relearn what is essentially Pokémon but not Pokémon. Everybody knows that Grass beats Water, but how does Mental fare against Crystal? Melee against Digital? 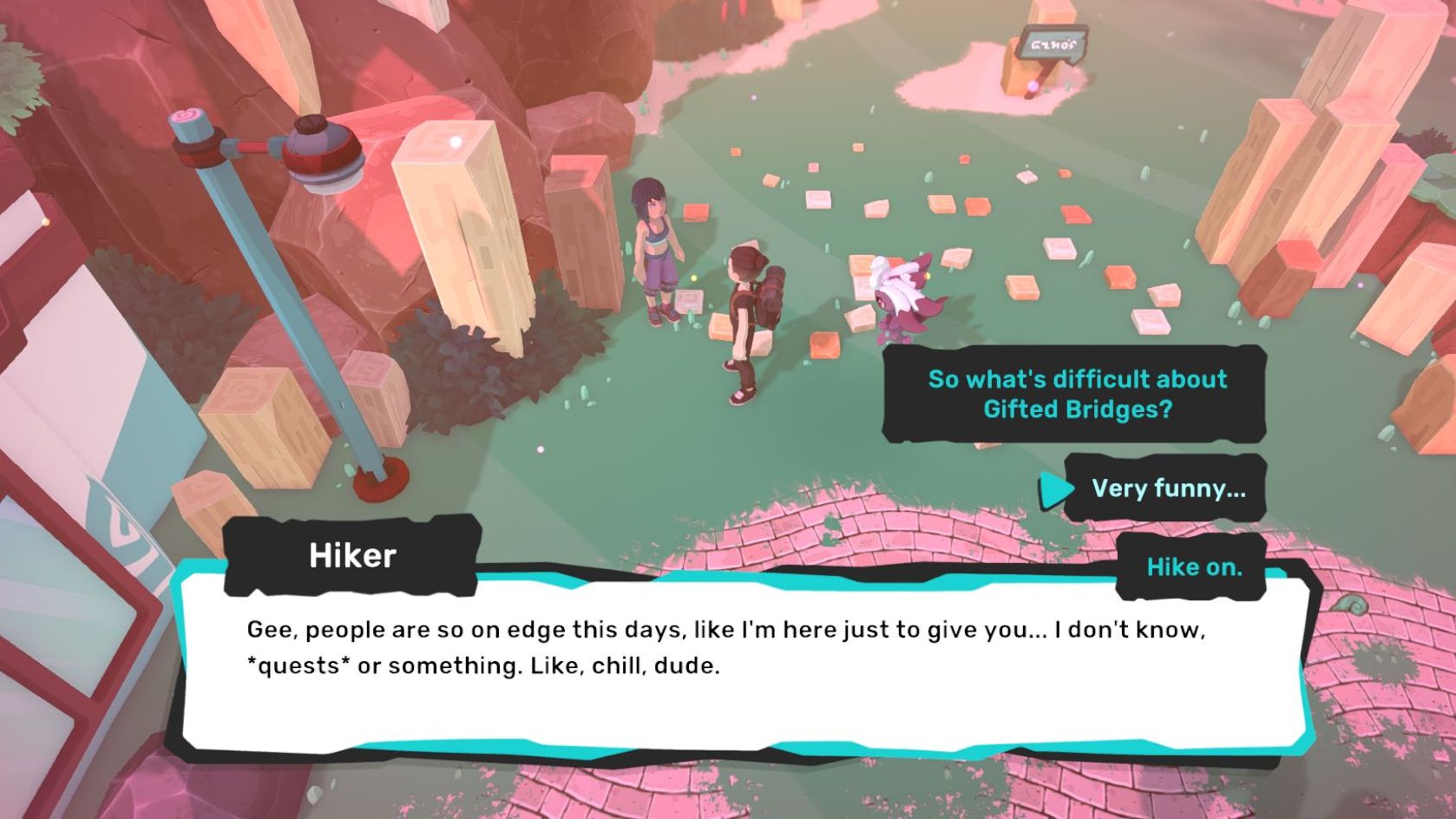 For the life of me I can’t seem to figure out what’s effective against what without constantly referring to a type matchup chart, which is oddly exciting. What’s more, I still get it wrong more often than not. I keep getting cocky and thinking, “ha, I know Saku is a Nature-type,” when, in fact, Saku is a Nature/Wind-type, and my Ganki’s Electric-type moves aren’t going to put a scratch on its weird propeller petal headdress. There’s something really, truly lovely about getting it wrong and having to teach myself a whole new elemental type system.

Also wort noting is that Temtem’s battling is much more along the lines of something like Persona than Pokémon. Battles are 2v2 rather than 1v1, and your Temtem have a stamina bar that gets depleted based on the move you use, as opposed to each move having its own individual PP meter. This is both a blessing and a curse, and if you overextend a Temtem the extra stamina they need will come off their own health bar.

What’s most important is that as much as Temtem shamelessly rips from Pokémon, it’s still far more its own thing than it is a mere clone. Its mimesis is so ham-fisted and flagrant that it’s very sincere - you can’t point and go, “Well, you’re just a big copymeowth, aren’t you,” because Temtem would just be like, “Cheers.” And it’s not like it doesn’t build on its base - Temtem uses what it has going for it, being a Pokésim for slightly grown up players that's also an MMO. Of course its players are naturally that little bit older. We even get talk of beer in Temtem. 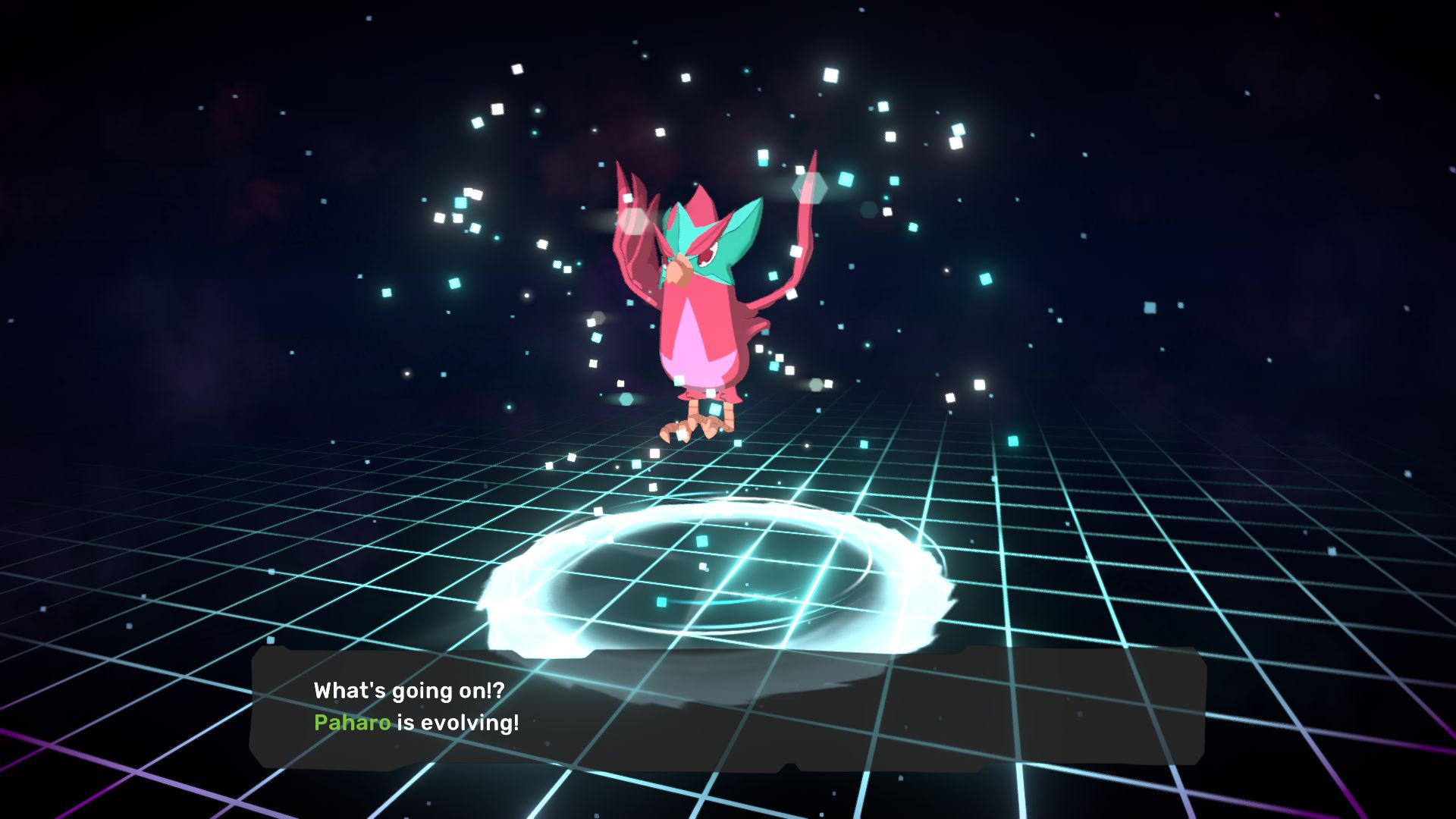 This might seem minor, but it’s probably the defining factor in terms of why Temtem works so well. Pretty much all of the things that propel the narrative - dialogue, plot, character design - elicit at least a chuckle. Imagine YIIK, but actually funny and enthusiastic instead of being a lazy meditation on hipster bros who read two passages of Nietzsche and just, understand the universe, man. Ten-year-olds could play it, but it's also aimed at people who are now adults remembering doing all this when they were ten.

Perhaps the best way to sum up where Temtem is right now is to talk shop, to compare what’s under the hood here to what Pokémon is packing. Say Pokémon is a Volkswagen Golf, right, which is an incredibly convenient and reliable car. Temtem is basically just the Sport model. Same build, but with extra specs, and a few unnecessary bells and whistles. Having access to an MMO server is great and all but it’s not necessary (especially if the wheels have been falling off that particular bit).

Temtem is Pokémon reinvigorated, the funny, stupid, excellent game about trapping magical monsters and having them beat each other up. It excels because it’s endlessly exuberant and highly aware of what a long-term Pokémon fan would want in 2020. It’s so enthusiastic that even the fighting begins with “Temtem up!” sometimes with multiple exclamation marks.

The only thing holding Temtem back right now is the shaky server, which goes up and down like a trampolining Jumpluff. Aside from that, it’s the best Pokélike in years - including actual Pokémon games.