You have possibly already heard about the Facebook group called "A group where we all pretend to be ants in an ant colony". Statistically speaking, it is likely that some of you are members. It prompted many slightly bemused articles around May and April of this year, as outlets like Buzzfeed tried to parse what it was and why over a million and a half people were members of it. Really, its aims were and are simple and few, and mostly stated in the title: everyone pretends to be an ant. The group loves ants and ant content. We BITE, LIFT and WORK for the QUEEN.

There are now almost two million members in the group, which has diversified the kind of ant content getting shared, and recently my ant family discovered Grounded, Obsidian's new early access survival game. You play as a child or team of children who've been shranken down to insect size, and must survive in the now dangerous jungle that is a suburban back garden. There is, as Sin pointed out, a lot of good ant content in Grounded. The colony likes this.

Over the past week or so, there has been a steady stream of posts about Grounded, mostly the same one screenshot of an ant with a caption mentioning HOOMANS. People love it, and are very excited because, as has been pointed out, imitANTion is the sincerest form of flANTtery. 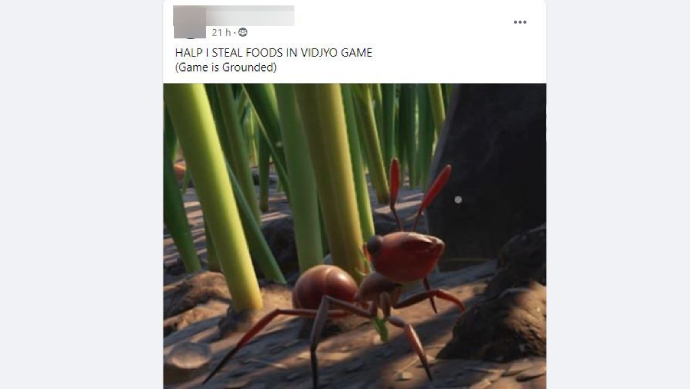 It has prompted a lot of people asking what the game is and sending each other to the Xbox and Steam store pages, but also a lot of people responding in what I would consider an ant appropriate way: WHY PLAY WHEN CAN LIFT? 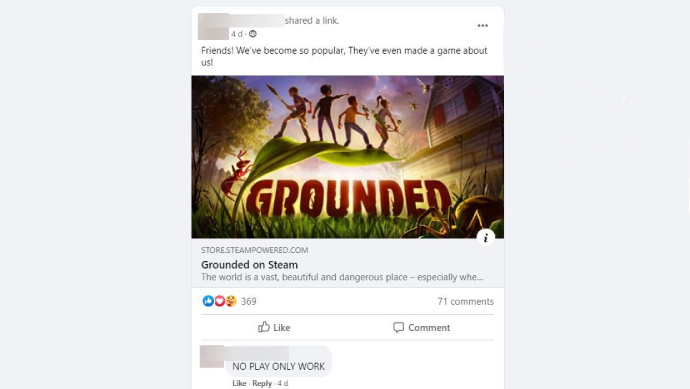 Ants in Grounded, as in real life, are largely neutral if you leave them to their business. Worker ants scurry around everywhere collecting food, but if you get a bit too aggressive near one it'll attack, and also call in a massive swarm of other ants. You can see one in action in Grounded in this clip, which shows a battle with a soldier ant - although the group, and indeed I in my capacity as AntAlice, would hardly approve of such wanton ant slaughter.

Grounded is out now in early access, and is included in Xbox Games Pass For PC, if you happen to have it (it's still doing its introductory first month for a quid offer if you don't).