Christmas has come a month early for owners of exceptionally fluent/friendly/fetching flight sim Aerofly FS 2. The overgrown damselfly pictured above is the sim's first rotary wing aerodyne. Priced at an irresistible 0 GBP (0 USD) and engineered with help from a chap who's logged an impressive 16,000+ flight hours in real whirlybirds, it's a faithful facsimile of a Robinson R22 according to developer IPACS, and “poetry in motion” or “happiness bottled” according to me. 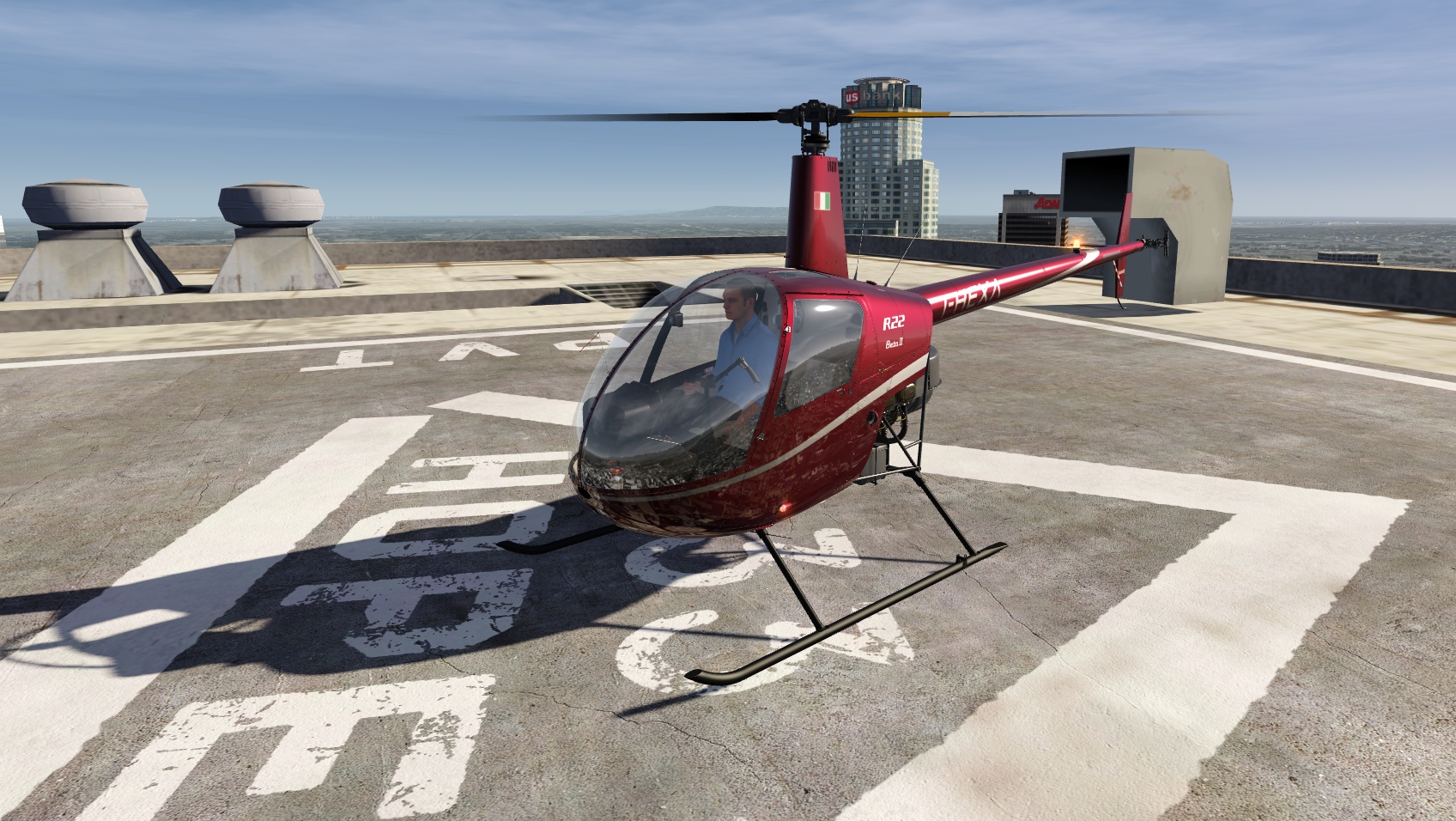 The update that added the R22 also added over 120 heliports to the sim's steadily increasing range of high-detail scenery areas (Outside of the Southwestern United States and DLCed regions like Switzerland, the Netherlands and South Florida, Aerofly FS 2's scenery is extremely basic). 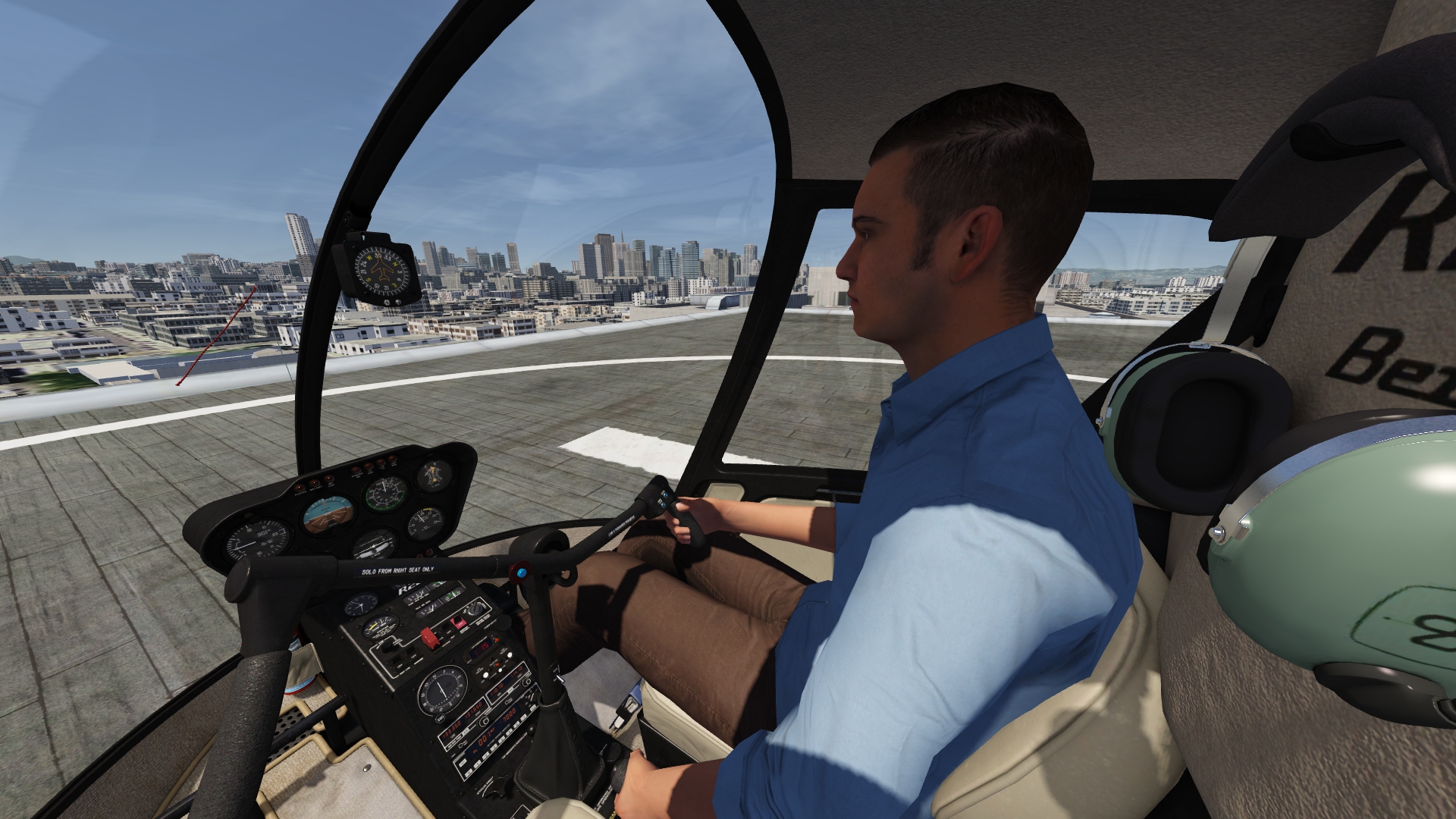 For those unfamiliar with chopper terminology, heliports are the officially approved landing pads you use when you're feeling straitlaced or there's no more tempting LZs available in the vicinity. 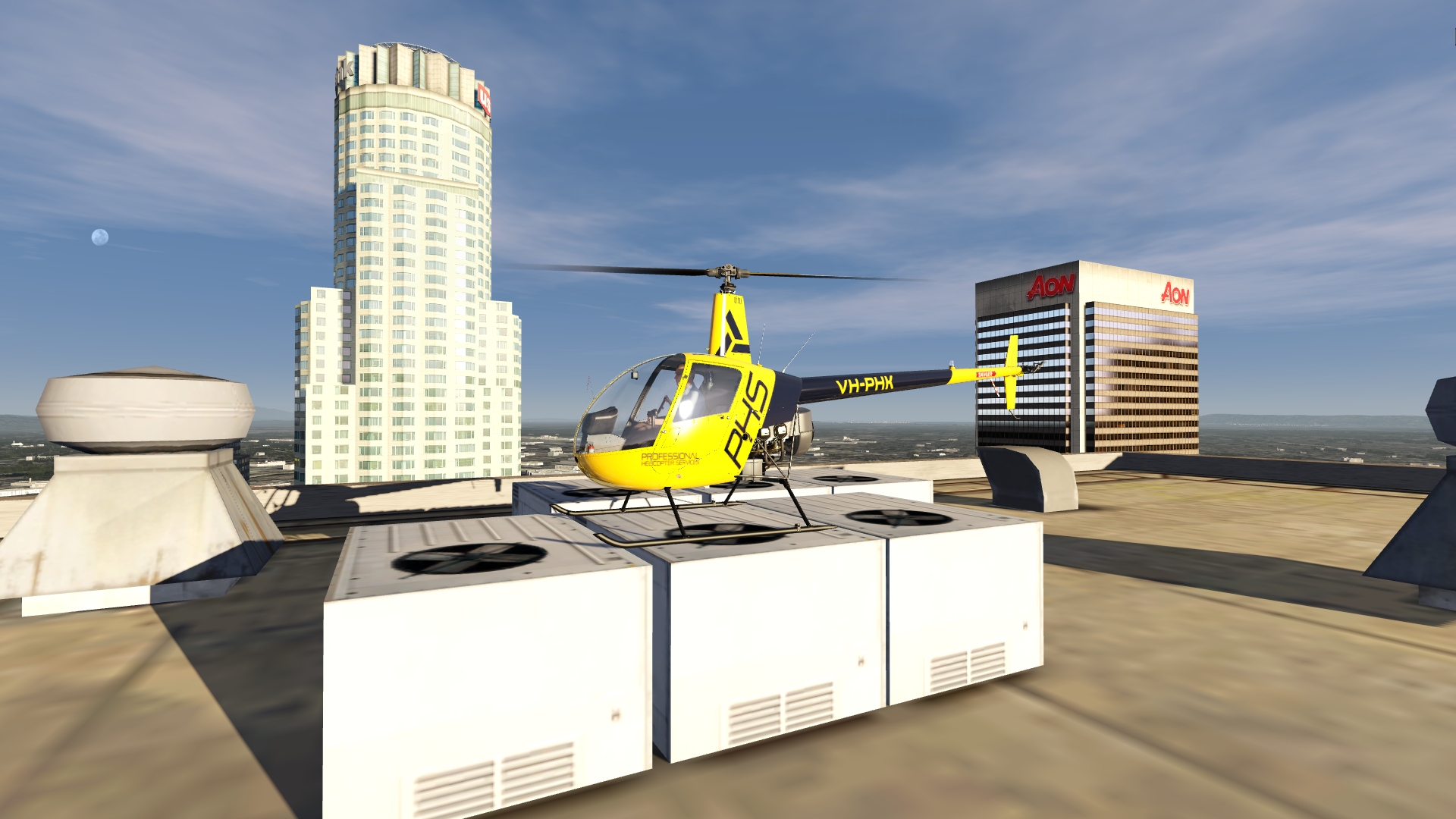 Because every horizontal surface larger than a table tennis table is a potential perch for the new flyable, and cities like Los Angeles and San Francisco aren't short of flat-topped structures, the £45 sim is now a chopper playground par excellence... 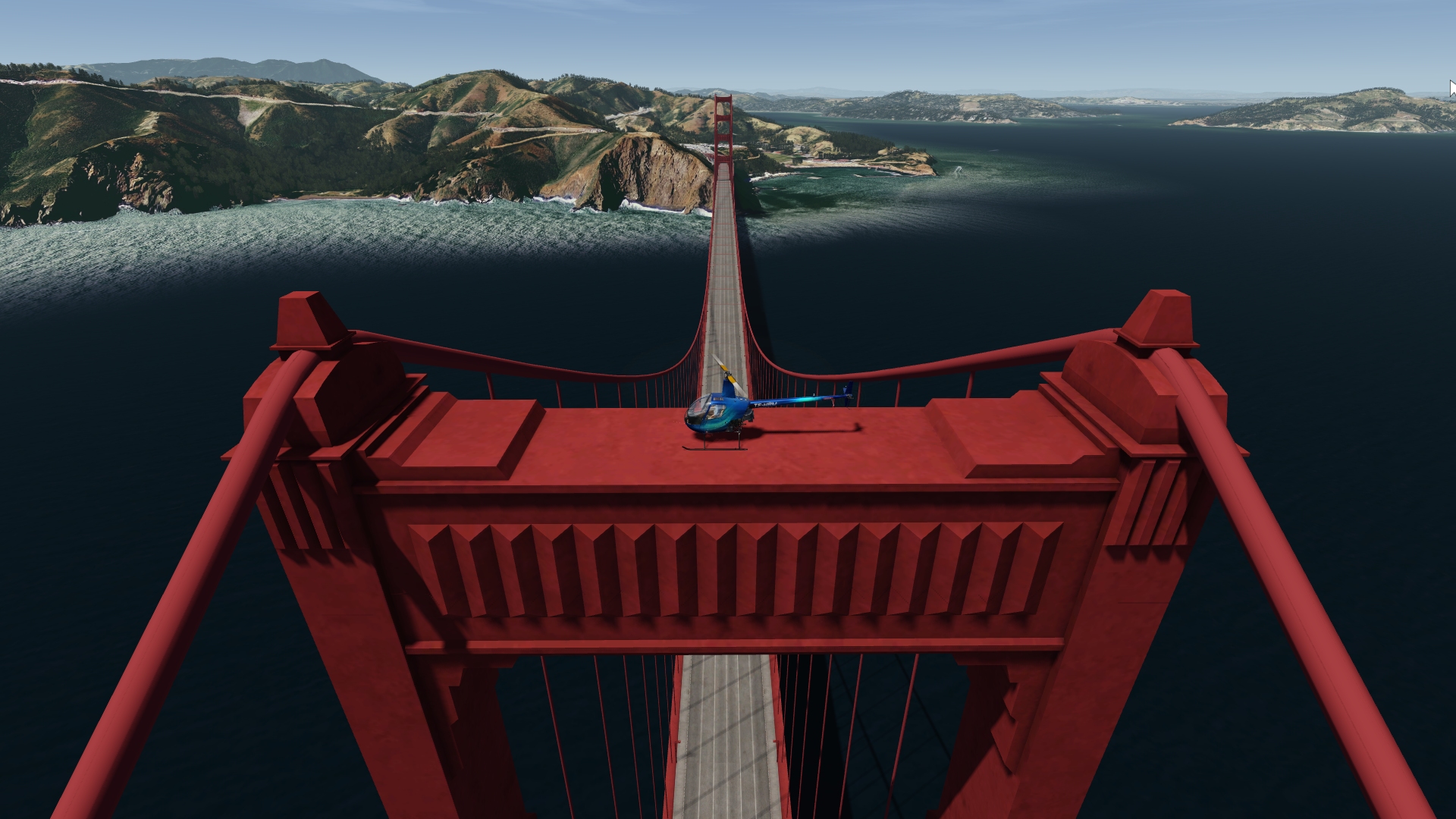 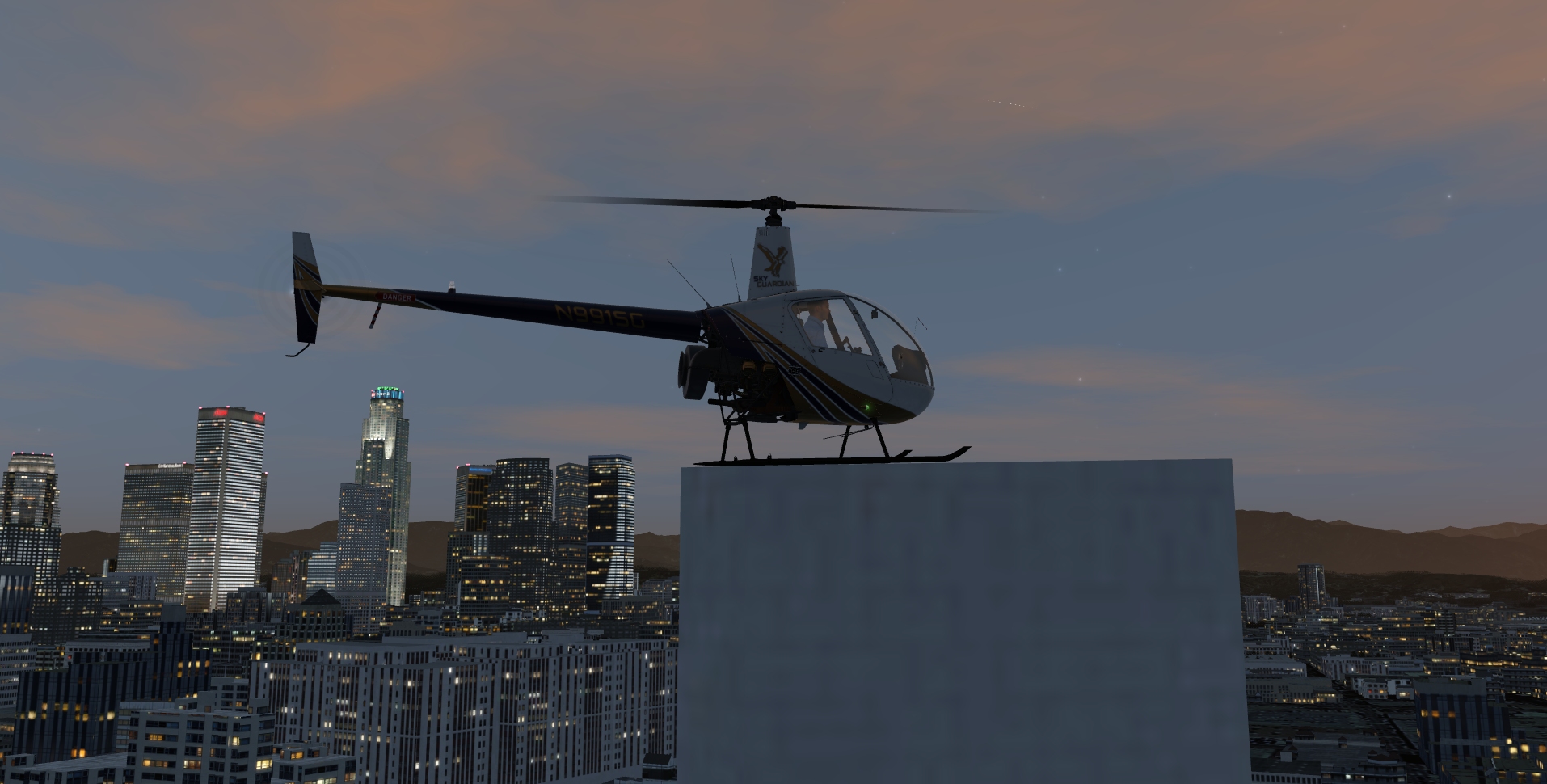 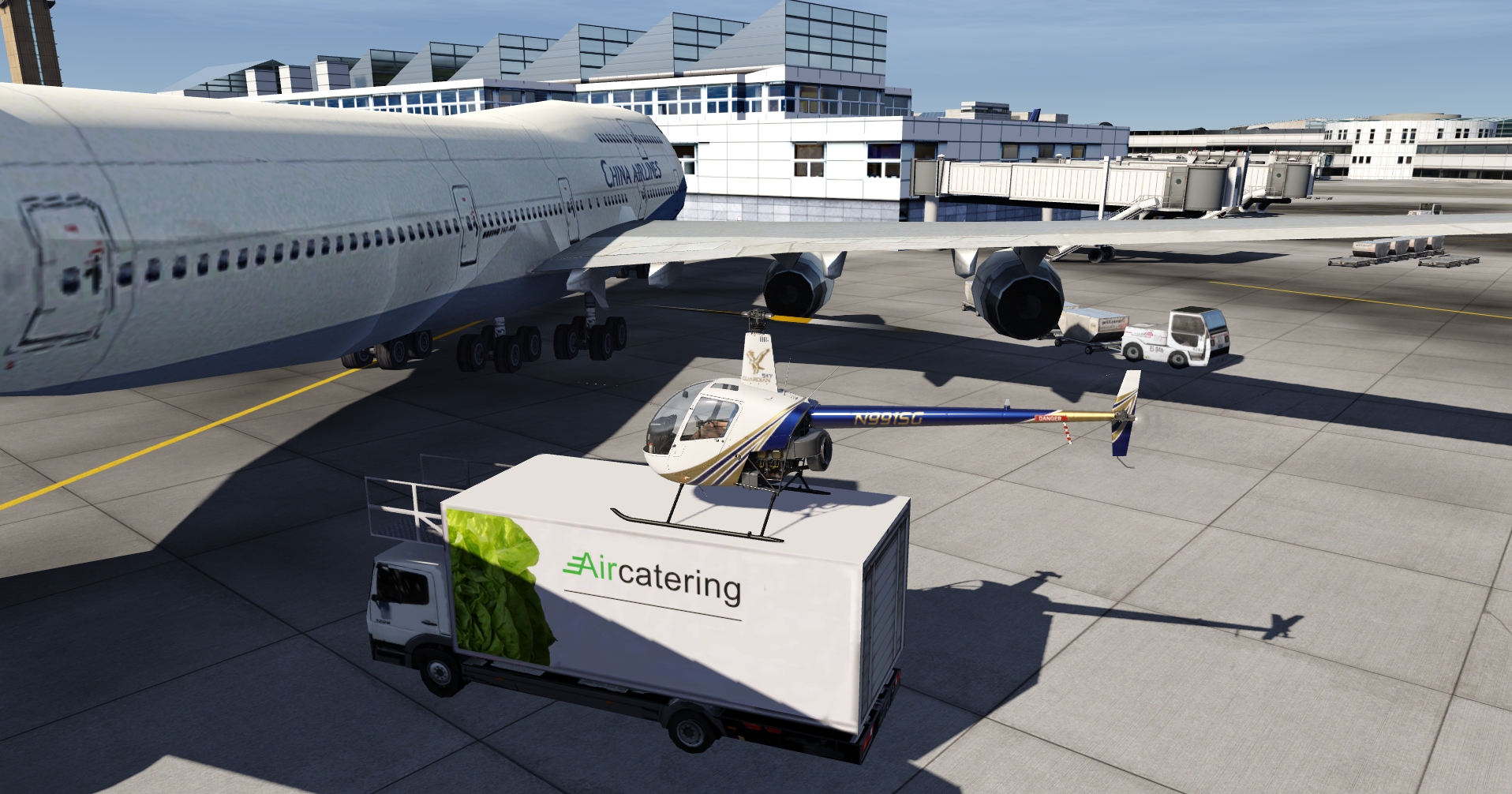 And with a relatively forgiving 'easy' flight model provided in addition to a livelier 'professional' one, gamepad clutchers and china shop bulls, can enjoy the endlessly stimulating “Where shall I land next?” urbex too. 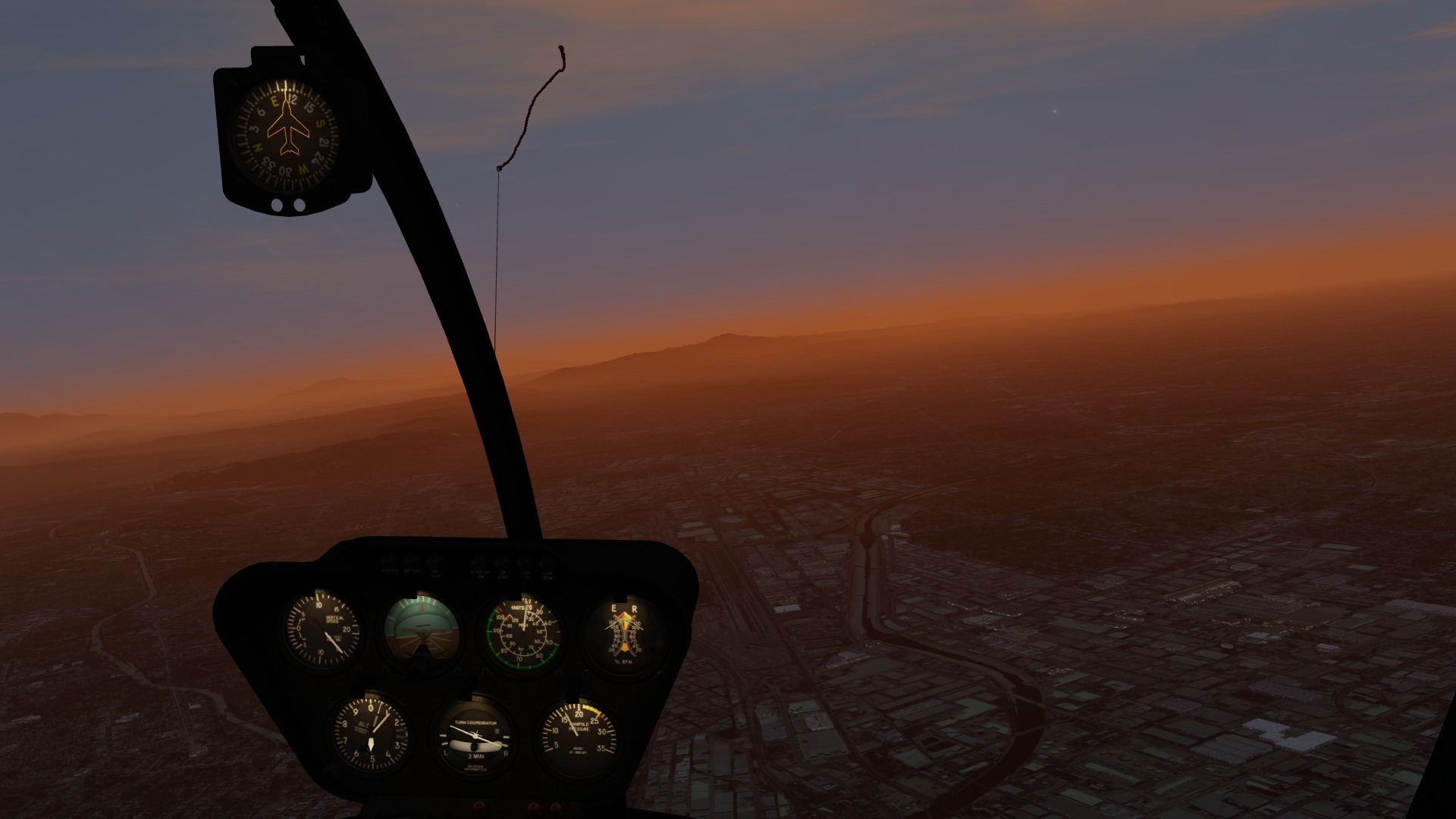 I can't find a detailed explanation of exactly how the 'easy' FM works, but I suspect two of the strangest and potentially most lethal peculiarities of real helicopter physics won't trouble you if you fly with it activated.

Dive the R22 in 'pro' mode, exceeding the type's 'VNE' (Velocity Never to Exceed) in the process, and you can find yourself witnessing a frightening phenomenon all the best heli sims reproduce. 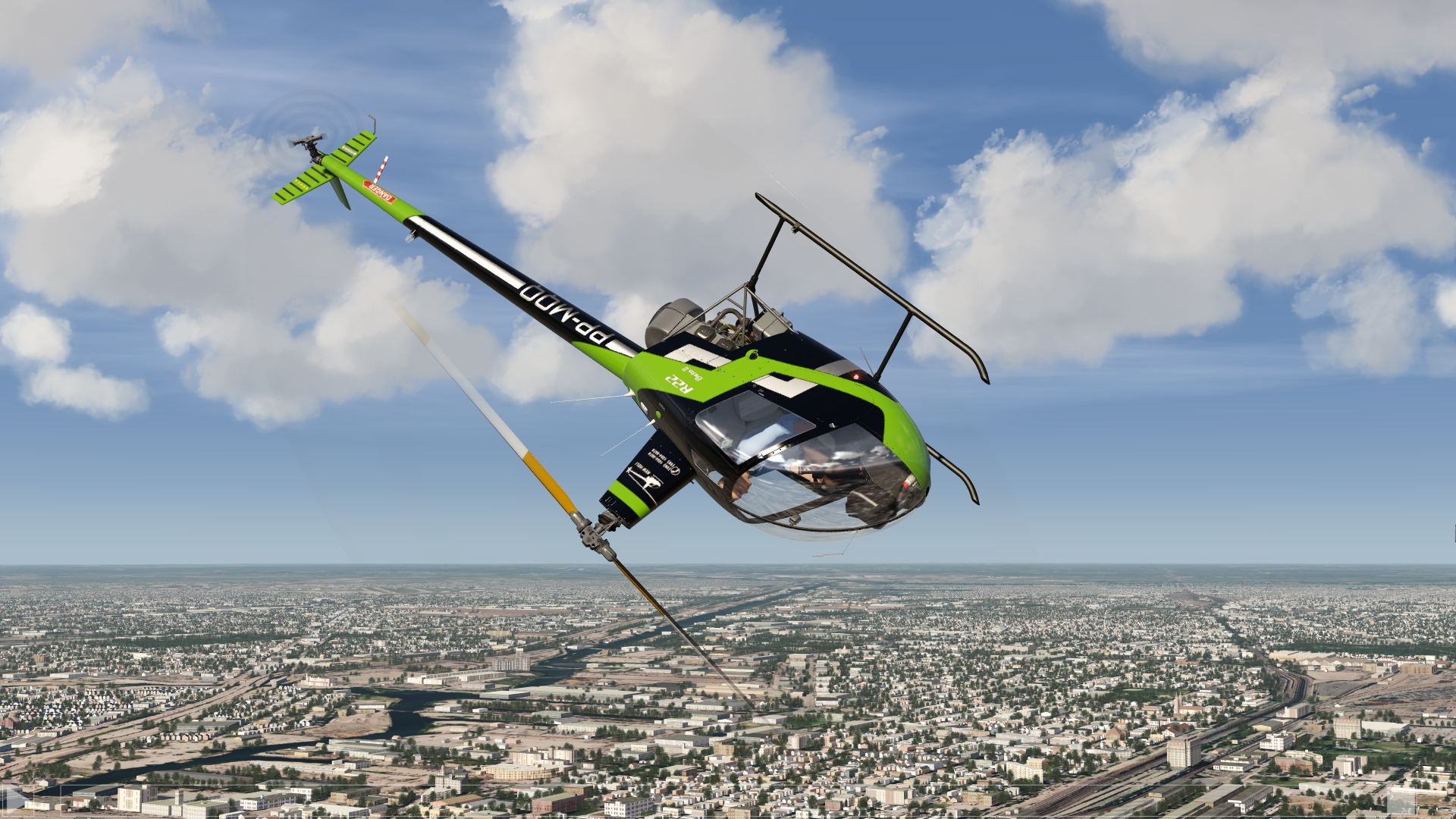 While fixed wing flying machines dislike dawdling, their twirly counterparts (well, those with single rotors anyway) react angrily to excessive speed. The retreating blade stalls that sometimes violently roll speeding choppers are actually provoked by the same thing that can cause Cessnas, Camels, Bf 109s and the like to wallow and tumble – too little lift. The faster you go in a heli, the less lift is generated on the side of the rotor disc swept by the retreating blades  (the blades moving in the opposite direction to the aircraft's direction of travel). All helicopters sport gizmos designed to minimise 'lift dissymmetry' but there comes a point where these mechanisms just can't cope and the hurtling machine decides to roll smartly in the direction of the lift shortage. 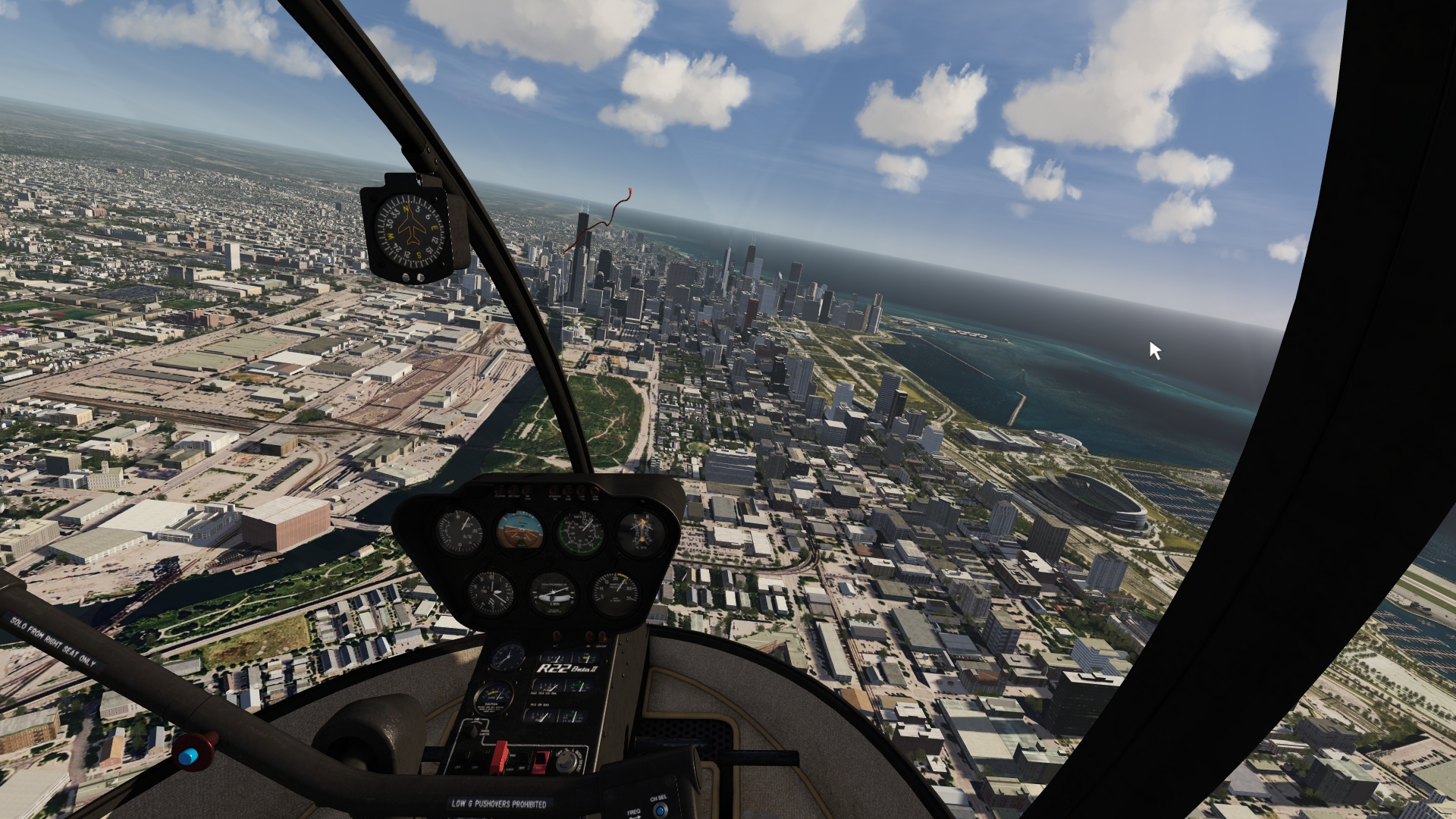 Another nasty surprise real helicopters and good helicopter sims like to spring is the vortex ring state. Typically entered when a pilot executing a vertical descent realises they're sinking too quickly and raises the collective in order to slow the descent, unwittingly creating a swirling doughnut of blade-defeating turbulence, VRS can be calamitous unless prompt corrective action is taken.

According to Wikipedia, only one helicopter type – the Sikorski Skycrane - has the muscle to pull itself out of VRS with power alone. Traditionally, aviators in lesser machines were encouraged to overcome the natural impulse to keep lifting the collective, and lower it instead while dipping the nose to fly out of the troublesome toroid. Lately, a new, more efficient escape method involving sliding sideways under maximum power has gained currency. It's called the Vuichard Recovery Technique after its discoverer and populariser, Claude Vuichard, the very same Claude Vuichard who worked with IPACS to ensure their R22 convinces.

Although engines never quit in Aerofly FS 2, an anti-clockwise twist of the ignition key can turn the R22 into an unlikely glider. Autorotation, another hallmark of a well made flight model, is possible in the sim assuming you do roughly what a real R22 pilot would when deprived of power - lower the collective promptly, then keep adjusting it to maintain rotor RPM while heading for terra firma at approximately 65 KIAS. The challenge, of course, is ensuring your 'glide' ends in a locale free of walls. Disappointingly, trees, traffic, and powerlines pose no collision risk in AFS2. 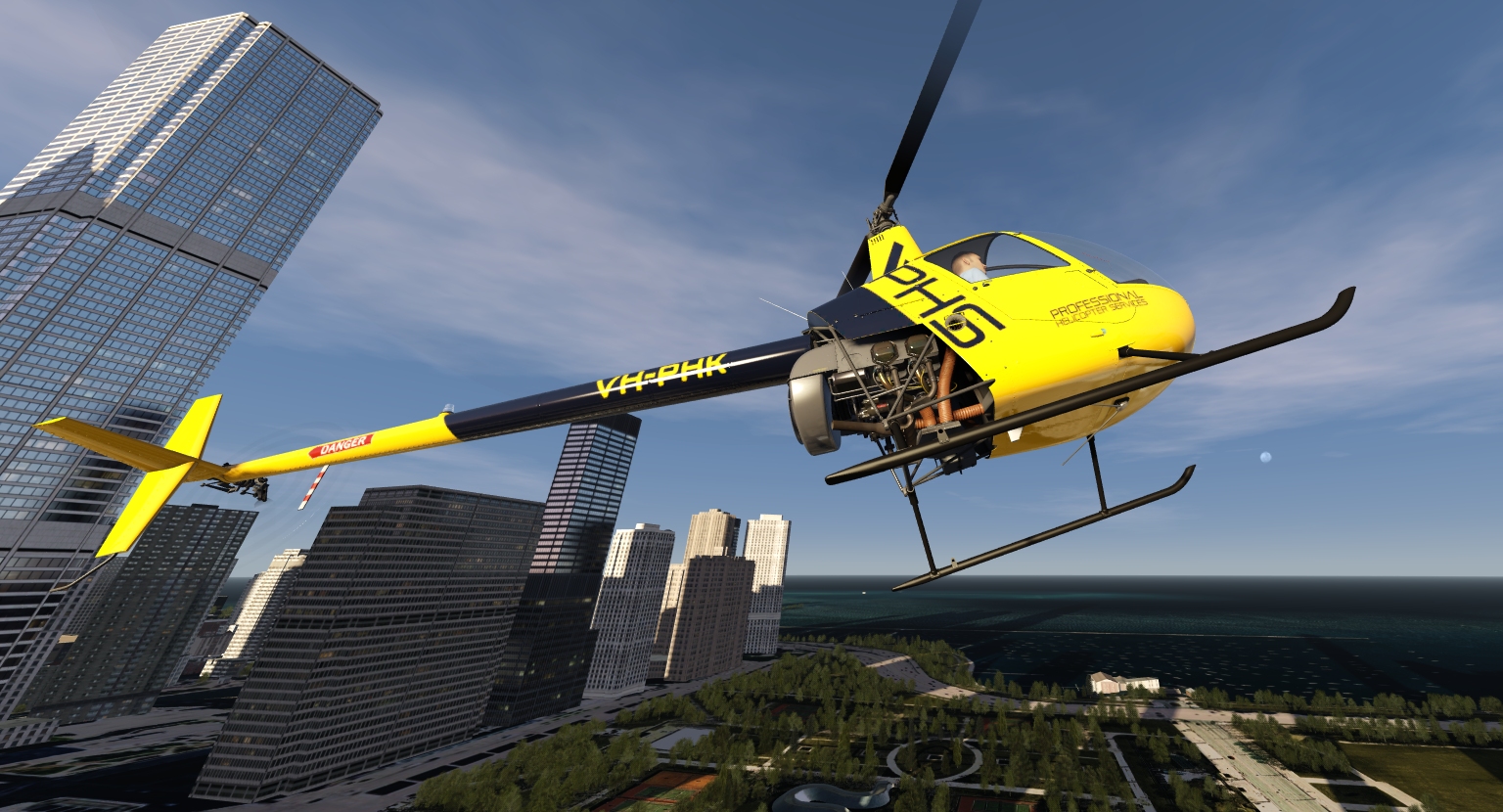 Only the most fastidious heli sims and heli sim addons bother to model rotor droop and mast bumping. In theory hurling IPACS' R22 about the sky as if it was a Pitts Special should, during certain extreme low-G manoeuvres, invite disastrous interactions between blades and bodywork or rotor head and rotor shaft. As I've yet to plummet to earth on traumatically shortened rotor blades or part company with my cloud churners completely, I can only assume that the rotors fitted to this replica R22 never flex or sag. 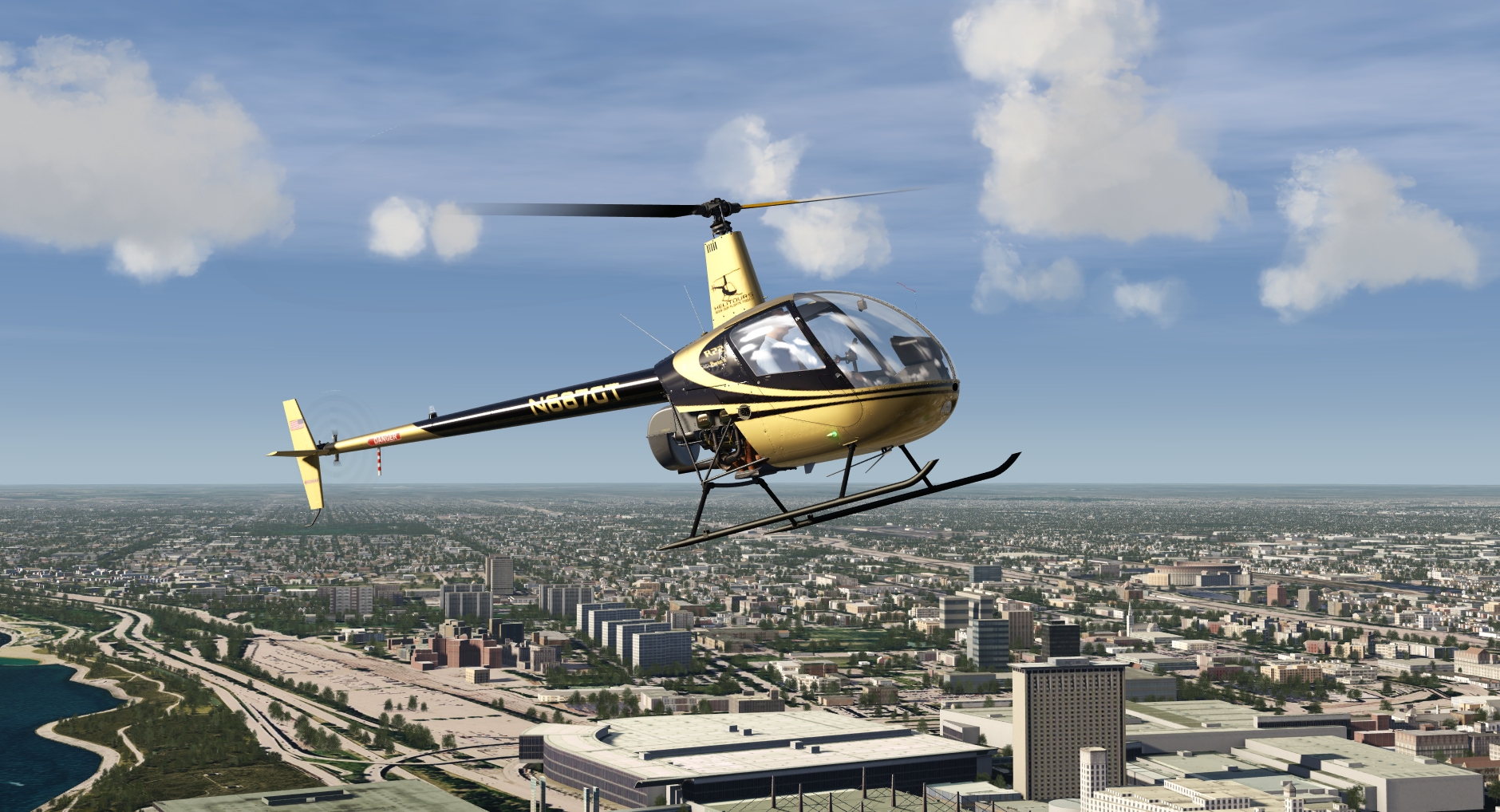 Exhilarating, photogenic and, as far as I can tell, essentially honest, AFS2's initial helicopter has reminded me how bally enjoyable simmed rotary wing aviation can be. By encouraging me to read more about chopper idiosyncracies like VRS, retreating blade stalls, and rotor droop, and visit specialist sites like HeliSimmer.com it has also made me aware of how shamefully ignorant I am of current yardsticks.

There was a time when I would have hazarded an opinion when asked the question “What sim offers the most realistic helicopters?”. Now I'm about as qualified to pontificate as the next genre gadfly. Is X-Plane still considered superior to MSFS where verisimilitude is concerned? Do serious desktop chopper pilots still cleave to DCS World hoverers like the Huey and Hip? In search of answers I sought out a couple of people who really should know what they're talking about.

'Sandman' is a regular poster on the Eagle Dynamics forums who also happens to be a serving military helicopter pilot. Most of his 1000+ flying hours have been amassed in the Bell 412, but he also has experience of the JetRanger and EC120 Colibri. Asked the million dollar realism question (“In your opinion, which heli sim is the most realistic?”) after confessing that, lately, he spent more time flying faux fixed wing warbirds than faux rotary wing ones, he said this: 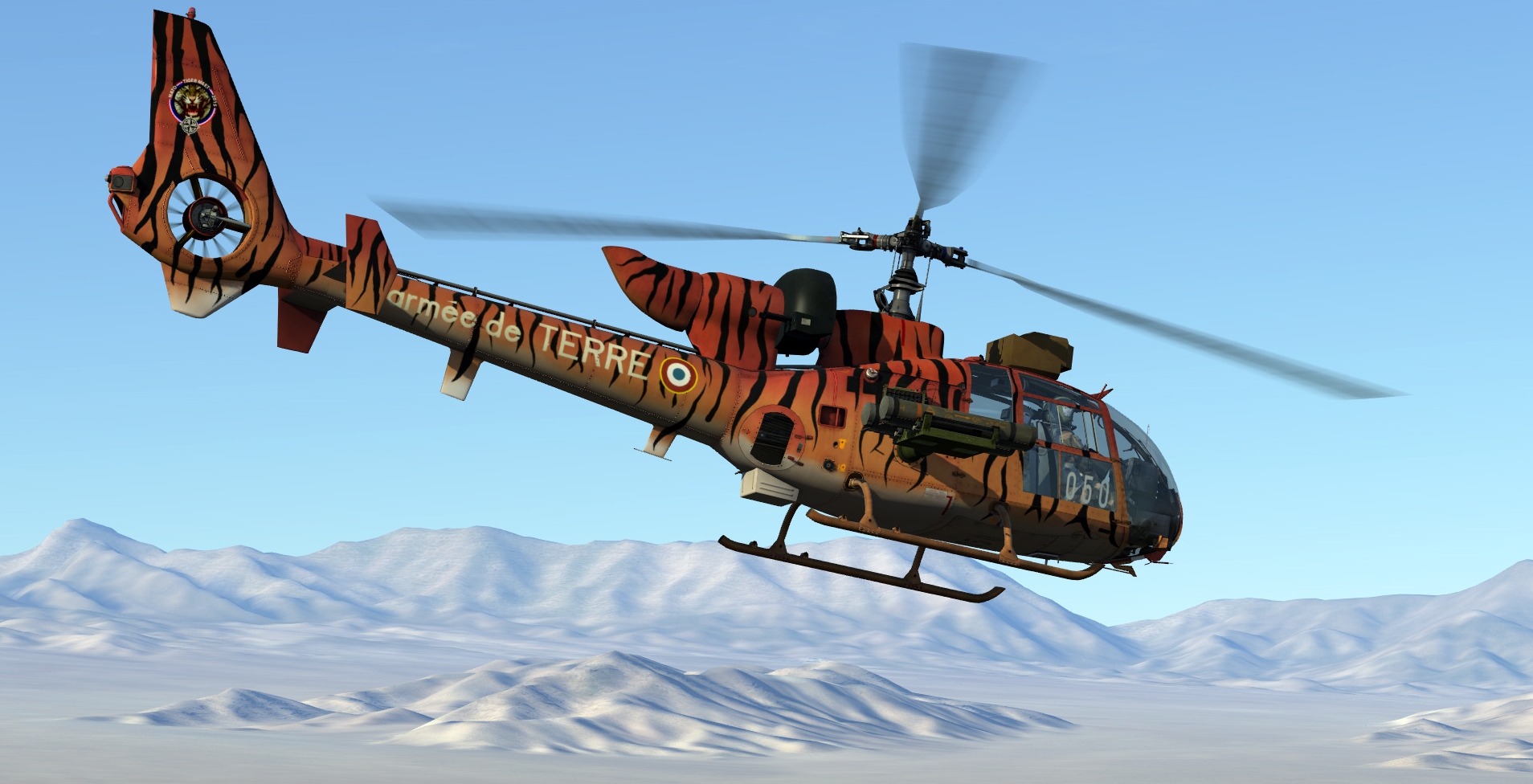 “The only sim helicopters I still use are the DCS Huey and, to a lesser extent, the Gazelle. I've found the DCS Huey to be the most realistic representation of true helicopter flying that I've tried. Having never flown anything even similar to a Gazelle, I can't really speak to its realism. Next to the DCS Huey, I'd have to rate the FSX Dodosim B206 high up on the realism scale. I used it when I was doing my ab initio training in a B206, and the flight dynamics and especially the sound were quite good." 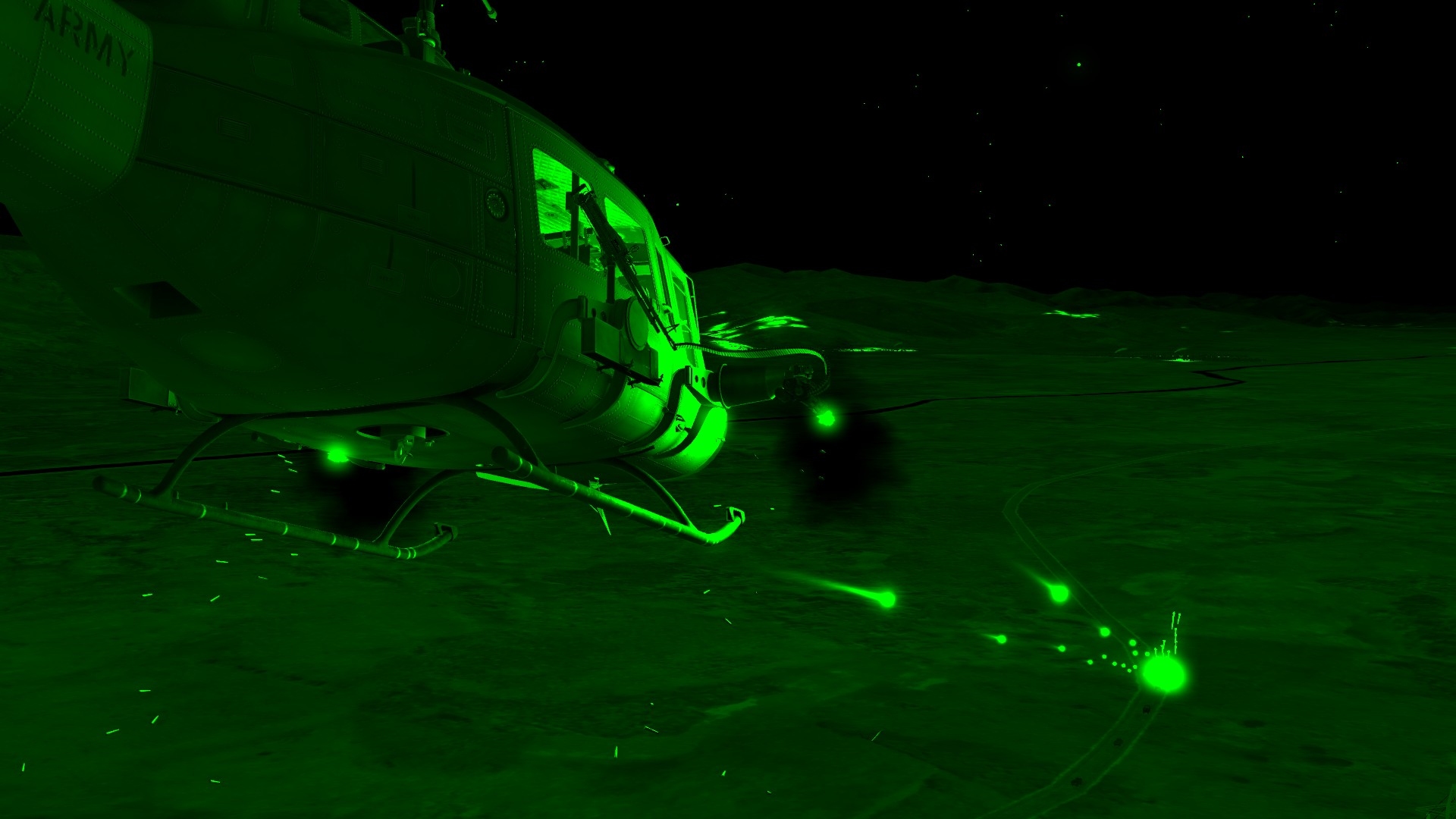 "All that being said, no sim is 100% perfect. I've found the DCS Huey to be a bit too prone to vortex ring state, and the touchiness of the controls will always be an issue unless you use purpose-built controls with extensions to simulate the available throw. Typical joysticks, due to their short throw, will exacerbate the sensitivity of helicopter controls (which are typically already very sensitive).  Further, helicopter flying relies very heavily on seat of the pants feel and peripheral vision, which is not available on a sim. VR helps considerably, providing much better depth perception. Due to these factors, I've always found precision flying much harder on a PC sim than in the real aircraft.”

Although Sérgio Costa, the second individual I approached, has, as yet, no experience of flying real helicopters, being the chap behind HeliSimmer.com, Simulatia's most vigorous and informative chopper sim site, he has an encyclopaedic knowledge of virtual ones. 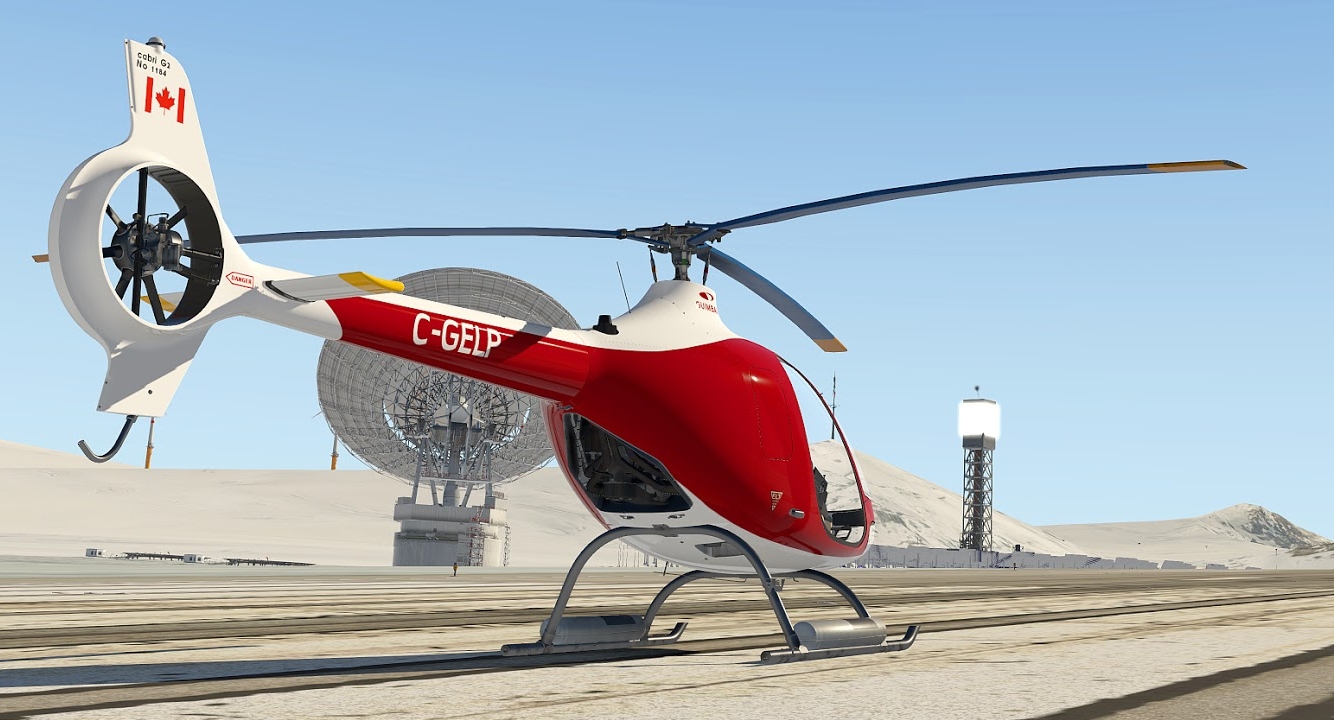 A particular fan of both DCS World (“It offers some amazing, complete and complex aircraft and systems, along with excellent flight physics.”) and X-Plane 11 (“The flight dynamics may not be quite as realistic or as complex as the ones in DCS, but it’s still very close to how helicopters behave in reality, with the extra bonus that you can fly the world.") X-Plane's breadth and versatility ultimately give it the edge in Sérgio's mind: 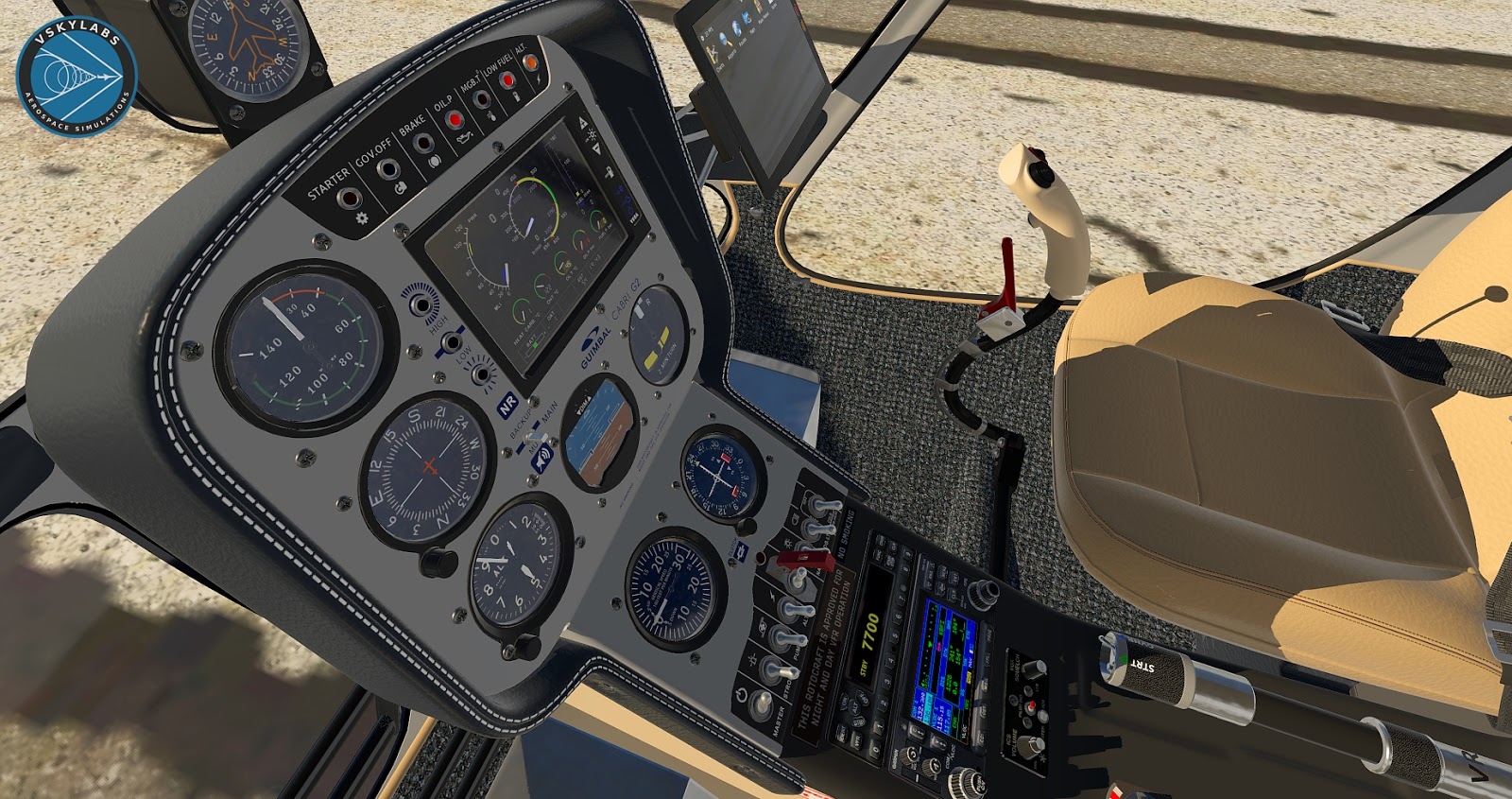 “All things considered, in my opinion, X-Plane offers the most realistic experience. It has outstanding flight and physics combined with the ability to fly anywhere in the world in a good  number of helicopters, both free and payware. It’s an excellent choice for both students/pilots (who can use it for training in familiar surroundings or getting acquainted with new regions) and the general simmer looking to get into helicopter flight simulation. X-Plane is my personal choice as it’s the most balanced and offers me everything I am looking for in a helicopter flight simulator.” 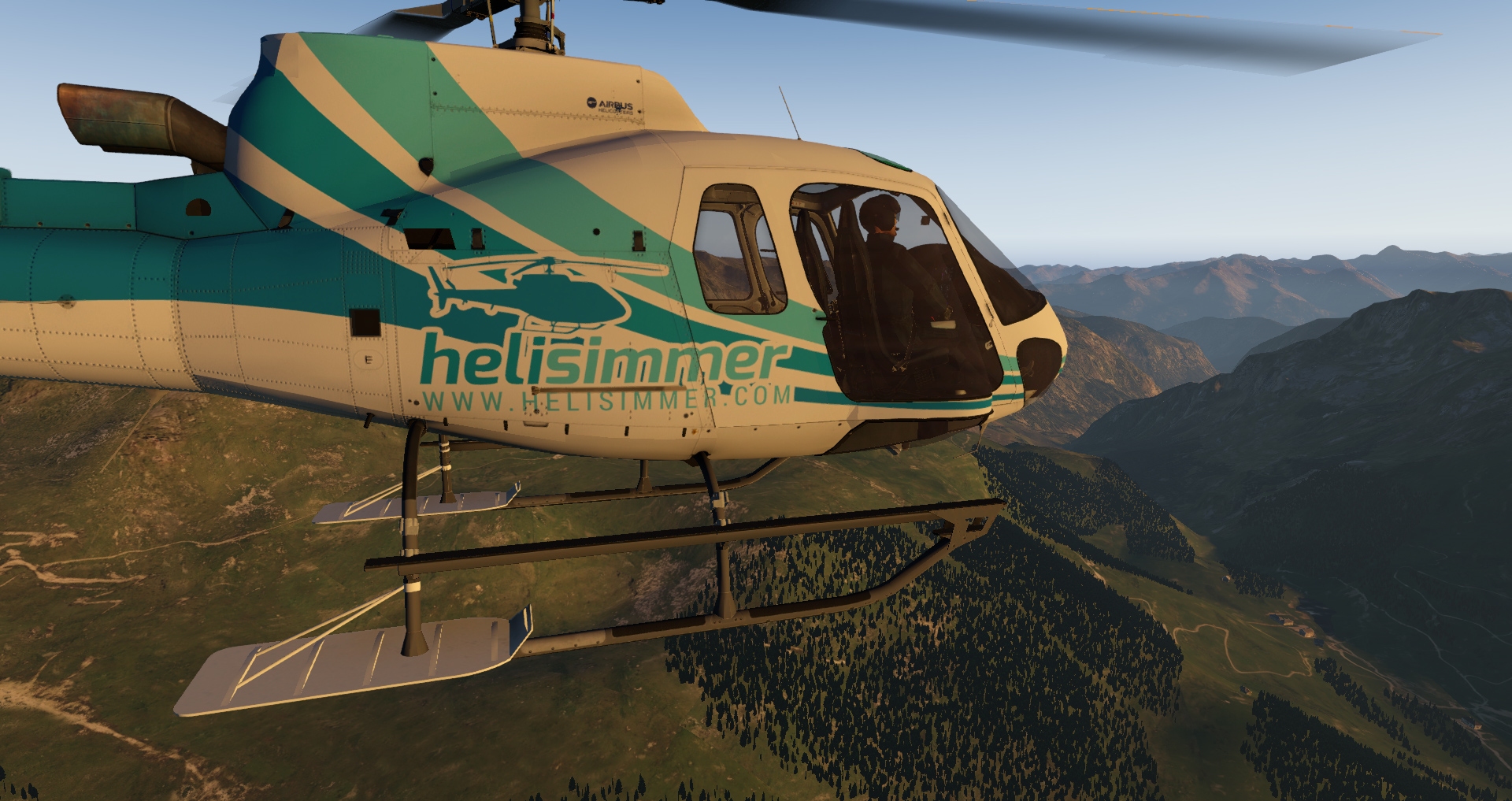 Pressed to name his favourite X-Plane helicopter Sérgio singled out the DreamFoil Creations AS350. 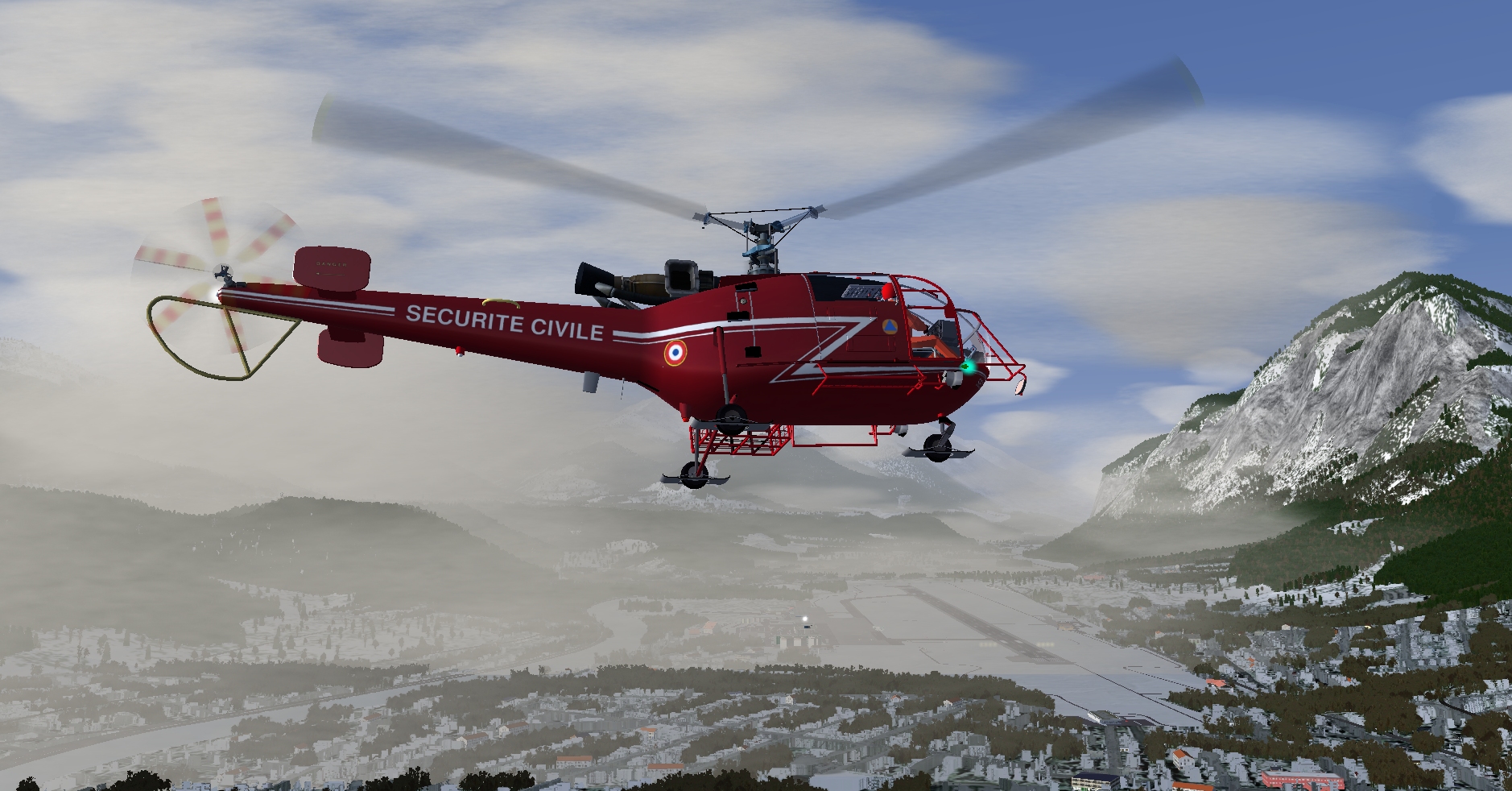 One thing all aficionados of sim whirlybirds can surely agree on is that there's no better/cheaper way to dip your toes into the sub-genre and learn the basics of heli control than through free open-source flight sim FlightGear. Finding FG add-ons susceptible to retreating blade stalls or willing to enter vortex ring state may prove difficult, but machines like the Alouette III pictured above are certainly real enough to charm, challenge and educate.