If you click on a link and make a purchase we may receive a small commission. Read our editorial policy.
Developer: Paintbucket Games
Publisher: HandyGames
Release: Out now
On: Windows
From: Steam, GOG
Price: £13.50

Happily, Kalypso's squeamish attitude to WW2 isn't shared by everyone in the games industry. While some go out of their way to remove references to the despicable regime that started the 20th Century's bloodiest killathon, others, Paintbucket Games for example, work hard to ensure Nazism appears on our screens unedited and unvarnished. Thought-provoking Through the Darkest of Times deposits you in a city far more disturbing and dystopian than City 17 or Metropolis. 1930s Berlin. A history-rich story-wreathed TBS in which small acts of resistance can feel like major victories, it has, I was pleased to discover, considerably more to offer than an irreproachable educational agenda. 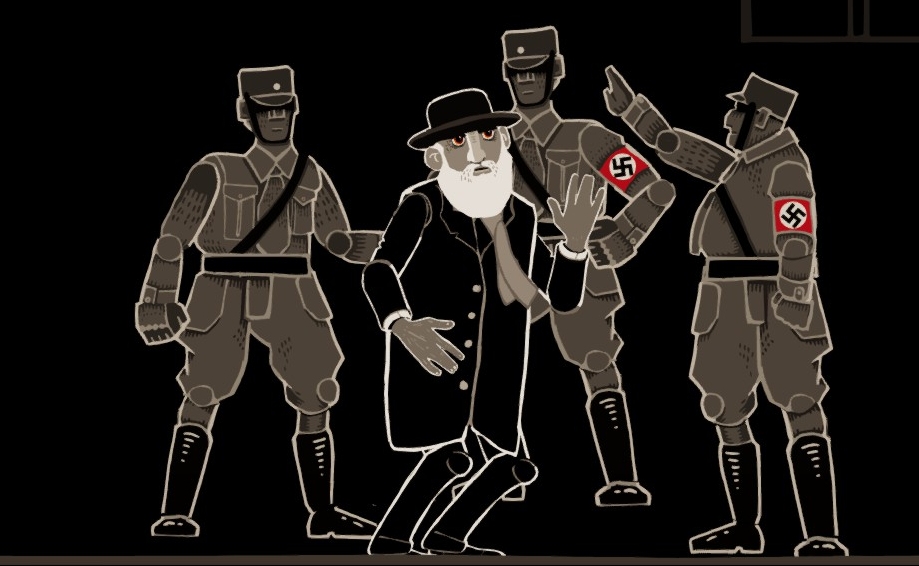 For the past couple of days I've been role-playing the kind of person we all hope we'd be (but in truth probably wouldn't be) if putsch came to shove. The kind of person willing to risk everything to resist injustice and cruelty. An individual whose first thought on encountering an old man being beaten-up by a gang of uniformed thugs would be “How can I save him?” not “Poor bastard. Glad it's not me.” 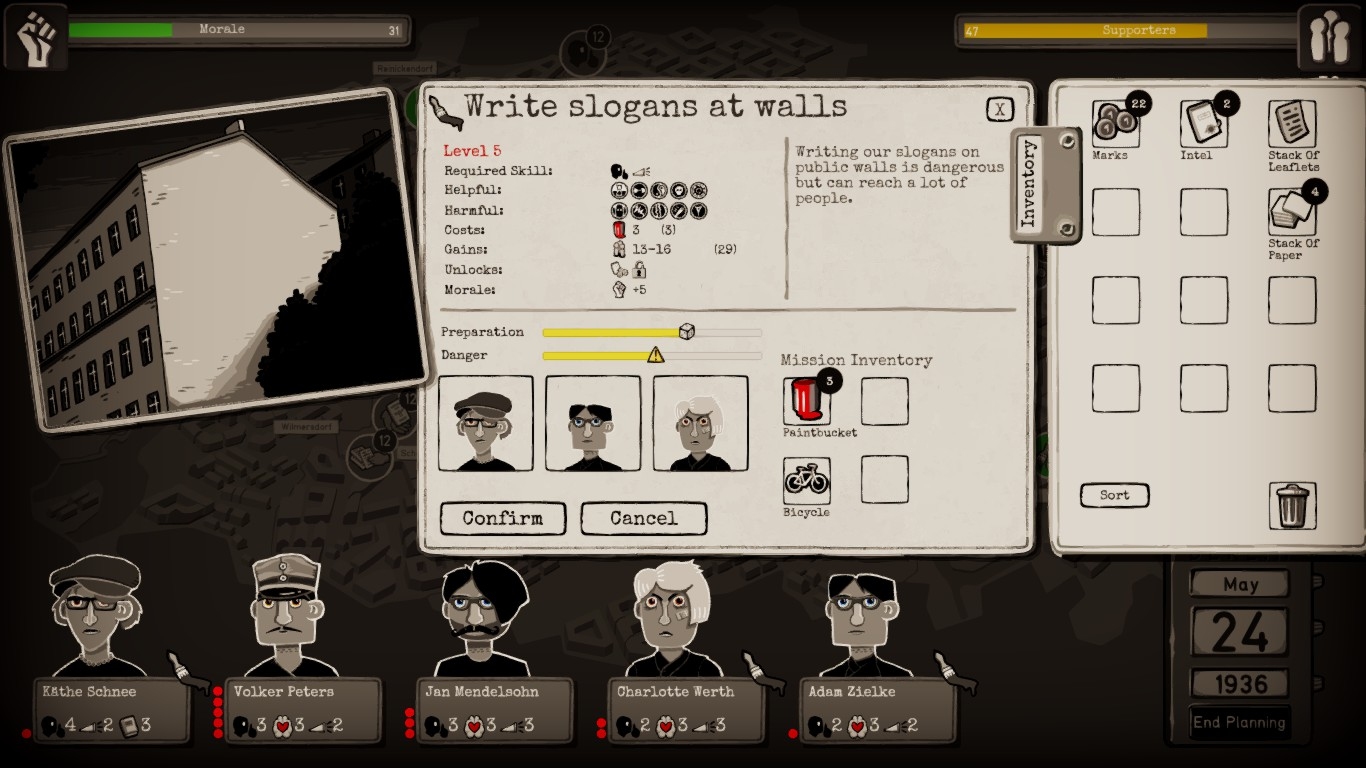 Käthe Schnee, my randomly generated avatar, leads a small cell of Berlin malcontents that specialises in minor acts of defiance and disruption. The group would, of course, love to strike mightier blows against the fascist regime that has turned Germany into a war-mongering, minority-murdering totalitarian state, but thus far (1944) a bit of leaflet distributing, graffiti scrawling, and fugitive assisting is basically all that they've managed. 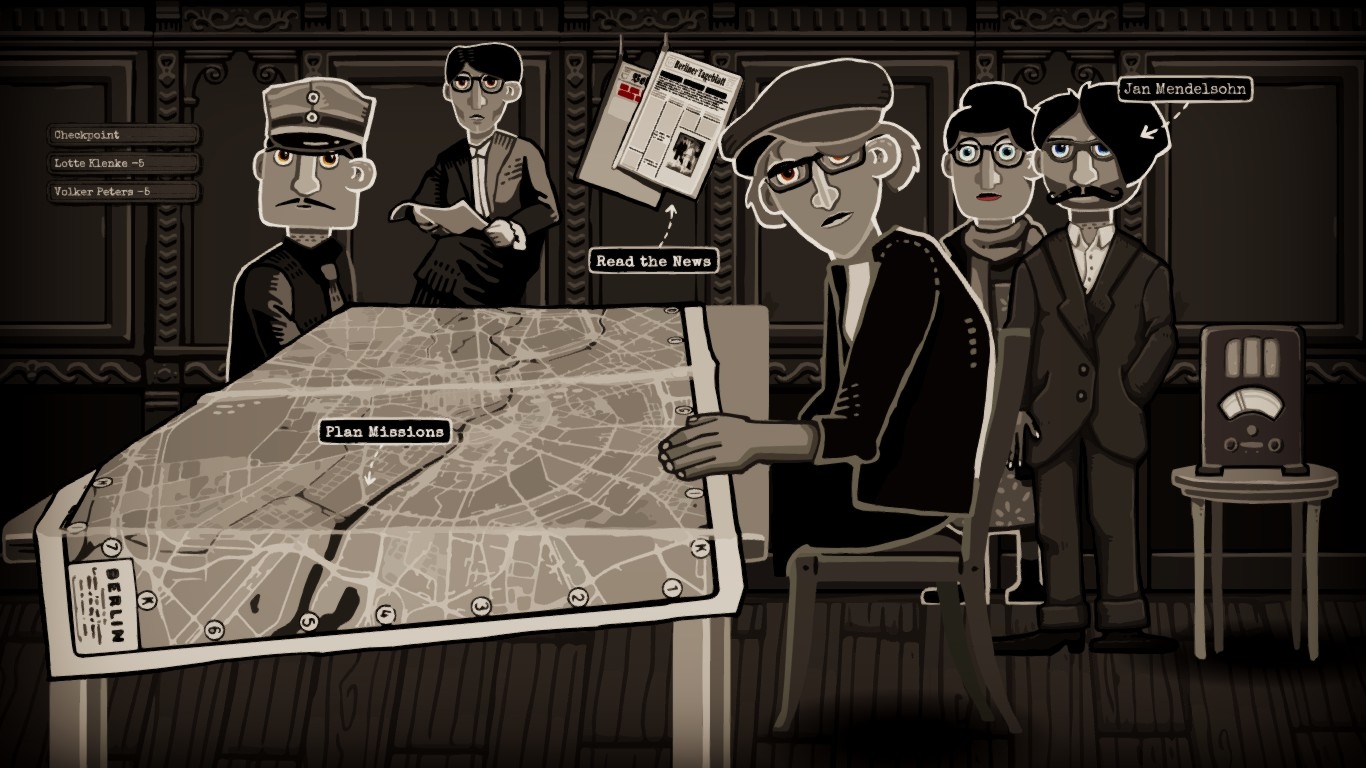 Roughly three-quarters of the way through the game's four chapters (1933, 1936, 1941, 1944/1945), Käthe is still a little unsure whether she's a rubbish resistance leader or a wise one. The game seems reluctant to judge my performance, and that reticence is actually rather refreshing. In Through the Darkest of Times you find yourself striving to achieve more not because you know there is some arbitrary victory reward waiting for you if you do, but because that's so very obviously the right thing to do.

I embarked on Käthe's journey fearing lashings of leaden, predictable story and precious little tactical depth. Happily, I found something quite different. Although you do spend a considerable portion of your time watching cutscenes and clicking through conversations, the narrative passages invariably engross, and there's an engaging strategy game here too. 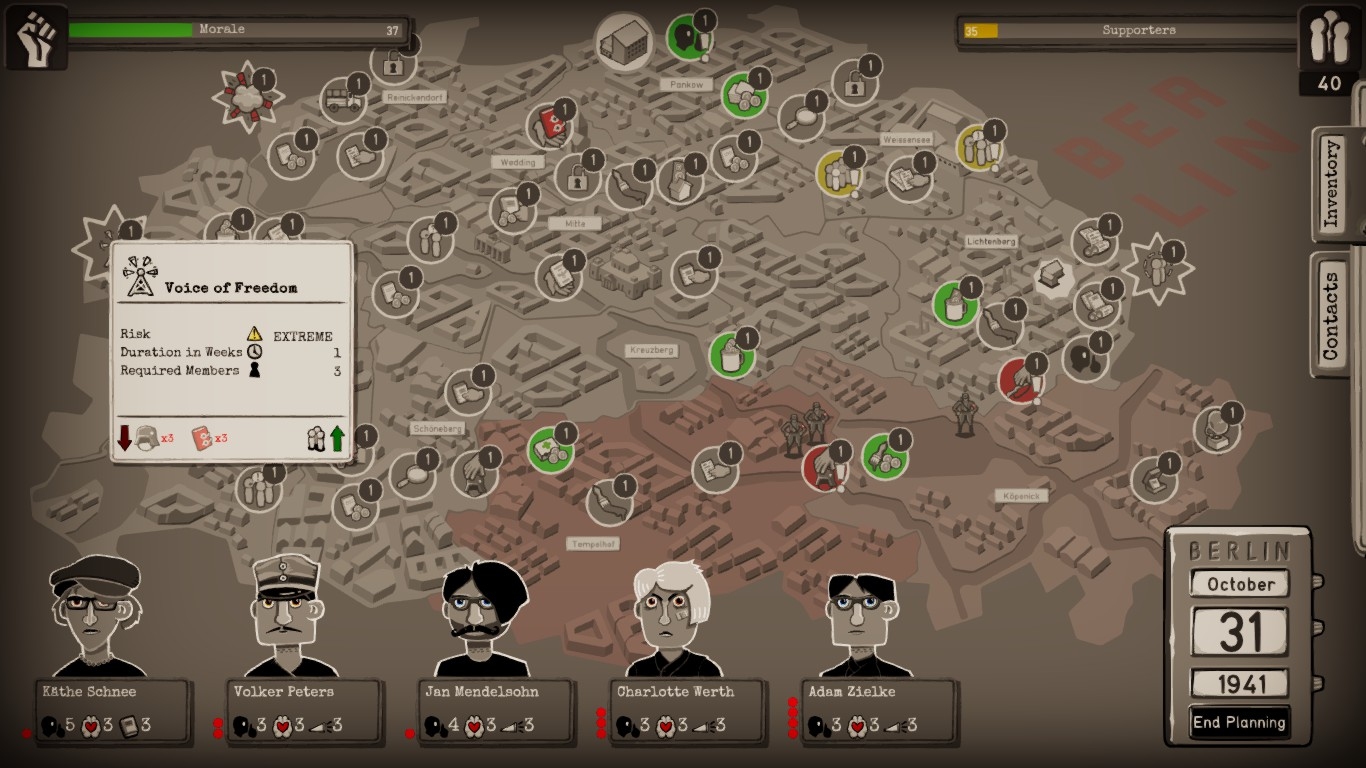 Once a week (turns span seven days) you get to ponder a city map, choosing missions then assigning operatives to them. Some outings have the potential to boost the group's morale*, funds, or support level. Others open up new opportunities or furnish resources (paint, paper, intel, bikes, uniforms...) beneficial to or necessary for future activities.

* If morale drops to zero it's game over. 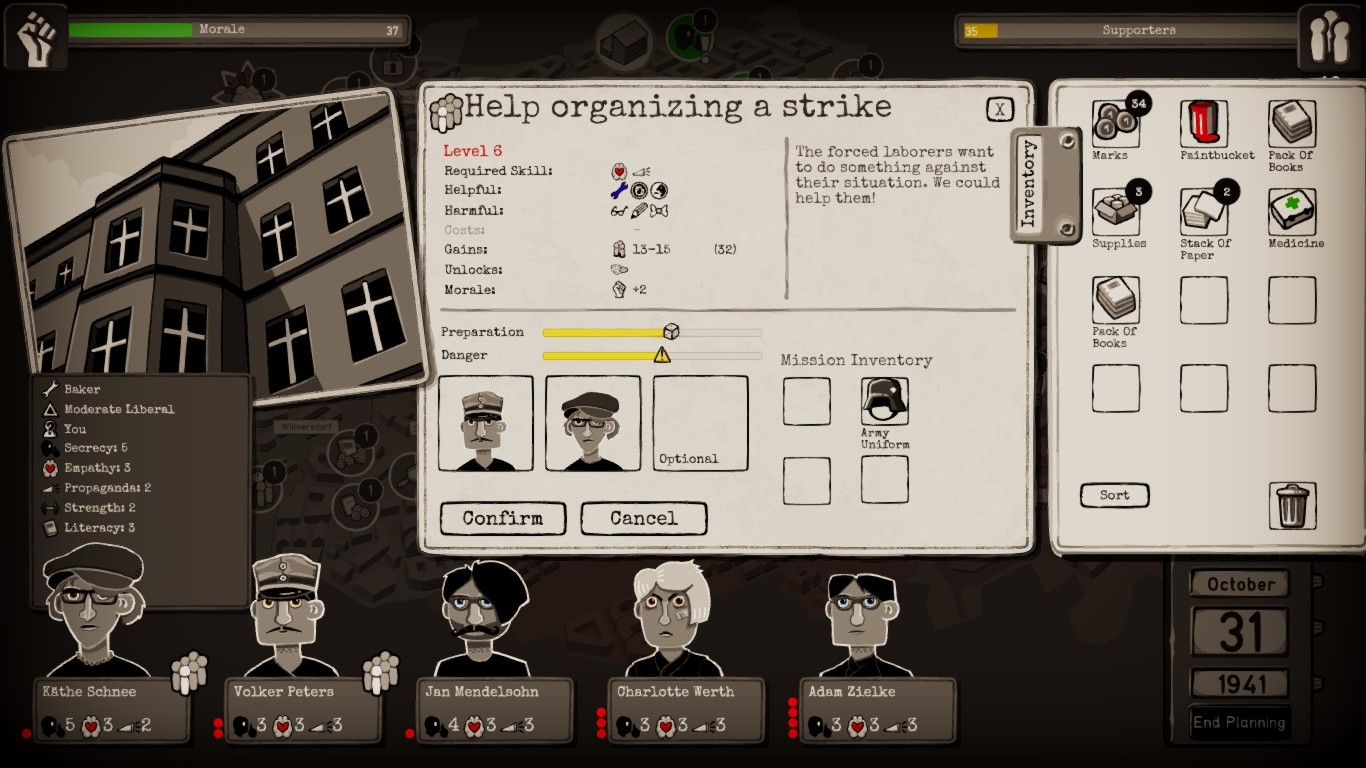 Because different types of missions require different skills and everyone in your gang is defined by a set of stats and Crusader Kings-style personality traits, choosing who will do what is seldom straightforward. Jan currently has my highest propaganda rating, but anarchists and apparatchiks don't tend to get on well so it might be better if I send someone else to meet that ministry contact. Lotte would be perfect for that surveillance job but her profile is high after the aborted weapon theft so maybe I should rest her this turn and send Karin instead. Switching personnel alters two gauges, “Preparation” and “Danger”, which respectively indicate how rewarding and risky the mission is going to be.

Assuming your operatives aren't spotted (in which case you're asked to choose between fleeing, hiding, and attempting to fight your way out) then you have no further involvement in missions. Invisible dice are rolled and the results baldly presented.

One of the reasons the real German resistance movement wasn't more effective was that its disparate elements came from all parts of the political spectrum and often struggled to cooperate. Penetration by moles was also a problem. Paintbucket acknowledge these issues with a friction mechanism, occasional desertions and snitch scares. When anti-fascists fall out, you can opt to eject one of the parties involved or smooth over the cracks. How local blabbermouths are silenced isn't spelled out. 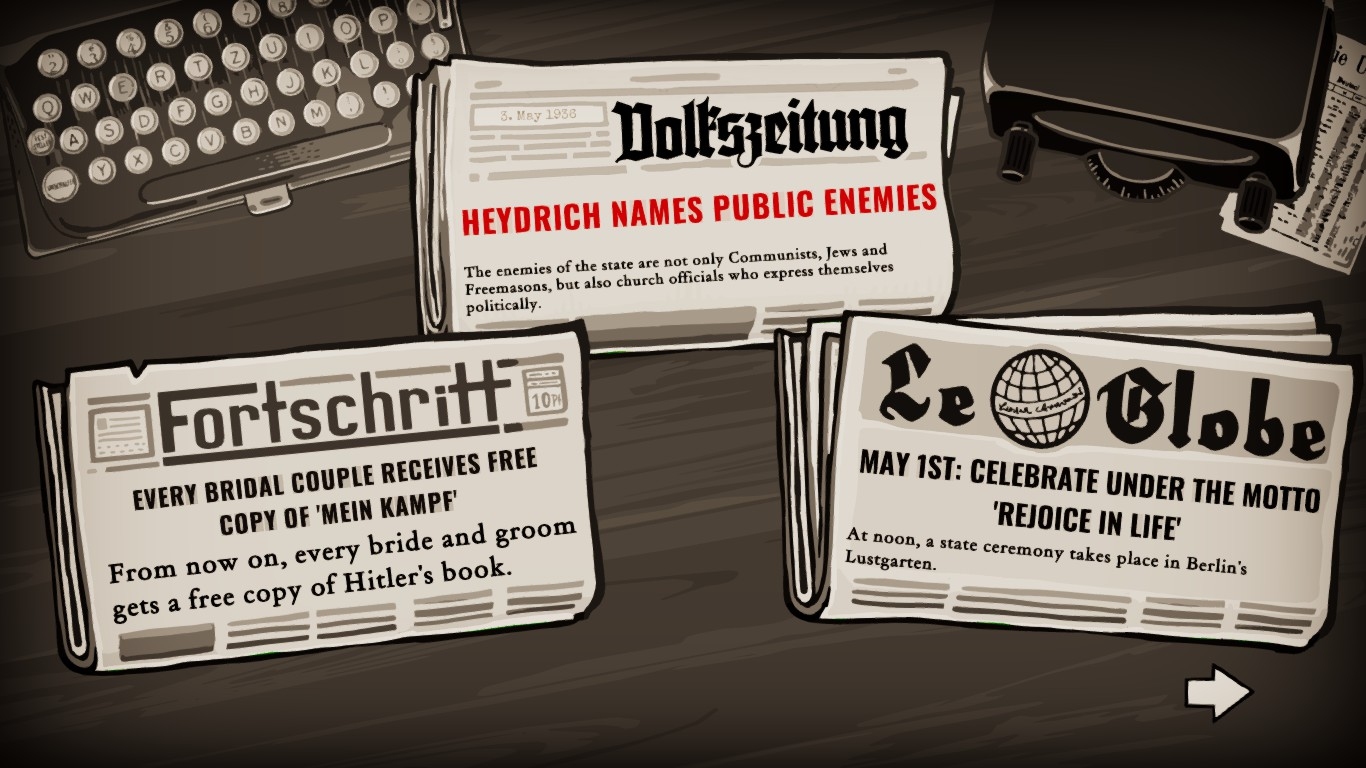 Sometimes story-generated dilemmas and decisions result in new mission icons on the map. On other occasions you're presented with H.R. problems without cartographic connotations. Should you encourage pregnant Charlotte to stick with the group for the time being or follow her instinct and quit? Can you afford to give Jan the cash he needs to get his communist father out of jail? TTDOT could very easily have ended up a game of two halves – story and strategy game. The devs artfully avoid this by binding the two portions together with a dense cat's cradle of fraught, credible decisions.

Credibility is the watchword in the narrative too. So far Käthe has encountered no absurd coincidences, pantomime villains or magical pets. Yes, she happened to witness first-hand several pivotal events in pre-war history - the Reichstag fire, the Bebelplatz book-burning, the opening ceremony of the 1936 Olympics... - but these serendipitous conjunctions never feel forced.

In the hands of less capable, less subtle storytellers, we might have ended up with a clumsy retelling of historical episodes familiar to many of us. Paintbucket manage to avoid the crass and the obvious most of the time, serving up instead a cast of nuanced recurring characters and a series of unexpected situations that regularly surprised and moved me.

Some of my favourite scenes involve the kind of situations history books usually ignore or struggle to evoke. A fist fight in an allotment between two boys, once firm friends. A tense disagreement in an air-raid shelter administered by Hitler Youth shelter fuhrers. A hushed conversation in a cinema in which the words of the conversationalists contrast starkly with the comedic scenes flickering on the screen in front of them... TTDOT sheds light on almost all aspects of life in the Third Reich and isn't afraid of asking uncomfortable questions about culpability and human nature while it does it. 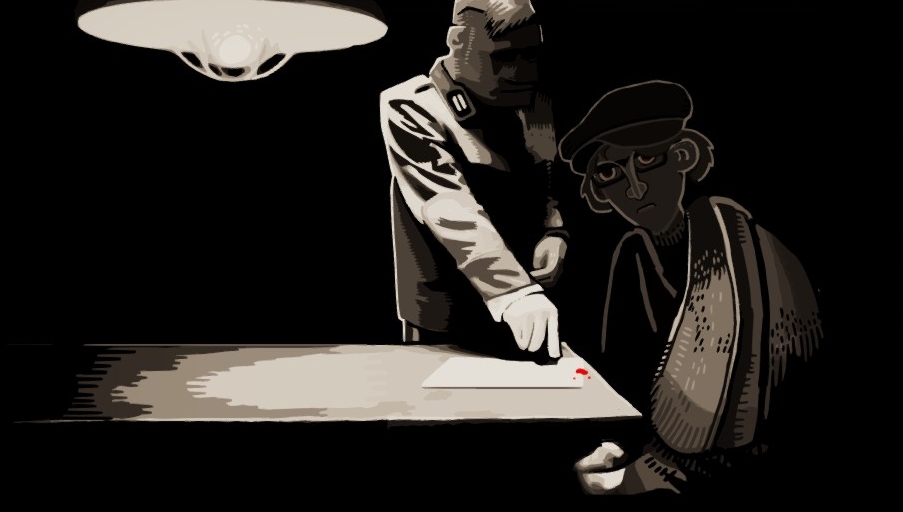 If it flinches at all it's in its representations of arrests and interrogations. A recent misclick (I accidentally ordered her to fight rather than flee on her bike) landed Käthe in a Gestapo facility for a second time. Her refusal to furnish her brutal interrogator with the information he was after really should have resulted in a trip to a concentration camp or an appointment with a firing squad. In fact she was set free – in effect allowed to restart her resistance career as if nothing had happened. Way of Defector was less merciful and tenser as a result. 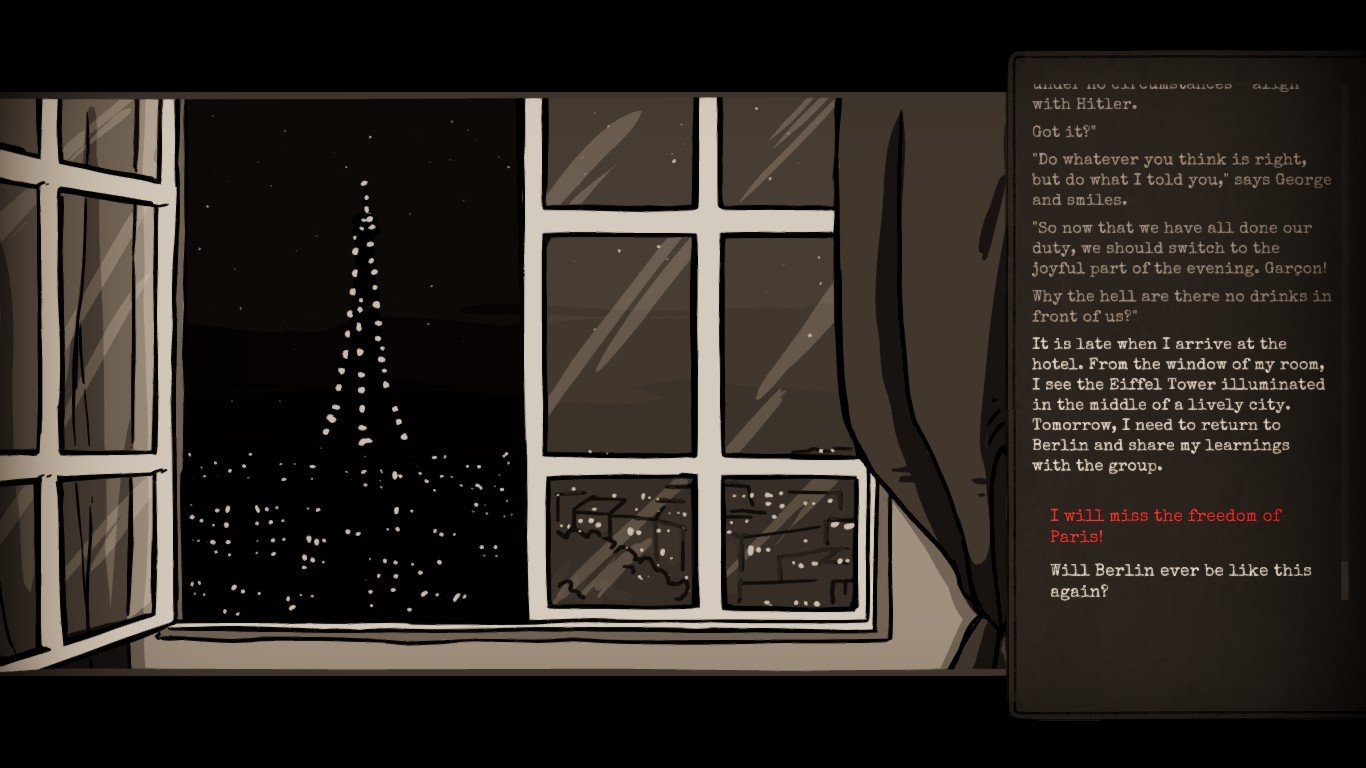 My reservations regarding the translation (not perfect) and the tooltips and tutorial (inadequate) are almost too minor to mention, and there are doubtless many who will disagree with me when I say that the artwork isn't wholly successful. The noticeably different styles employed for landscapes/backgrounds, cutscene figures, and group members, clash rather than complement each other, in my opinion. I found some of the backdrops disappointingly crude (above is one of the worst) and the unapologetically modern portrayal of the resistance fighters a poor fit for the game's period setting and gritty themes.

The fact that TTDOT's soundtrack is so superb only emphasises the visual shortcomings. Evocative popular songs of the period, haunting bespoke compositions, and moody ambient sounds frequently enhance the narrative in a way the graphics do not. 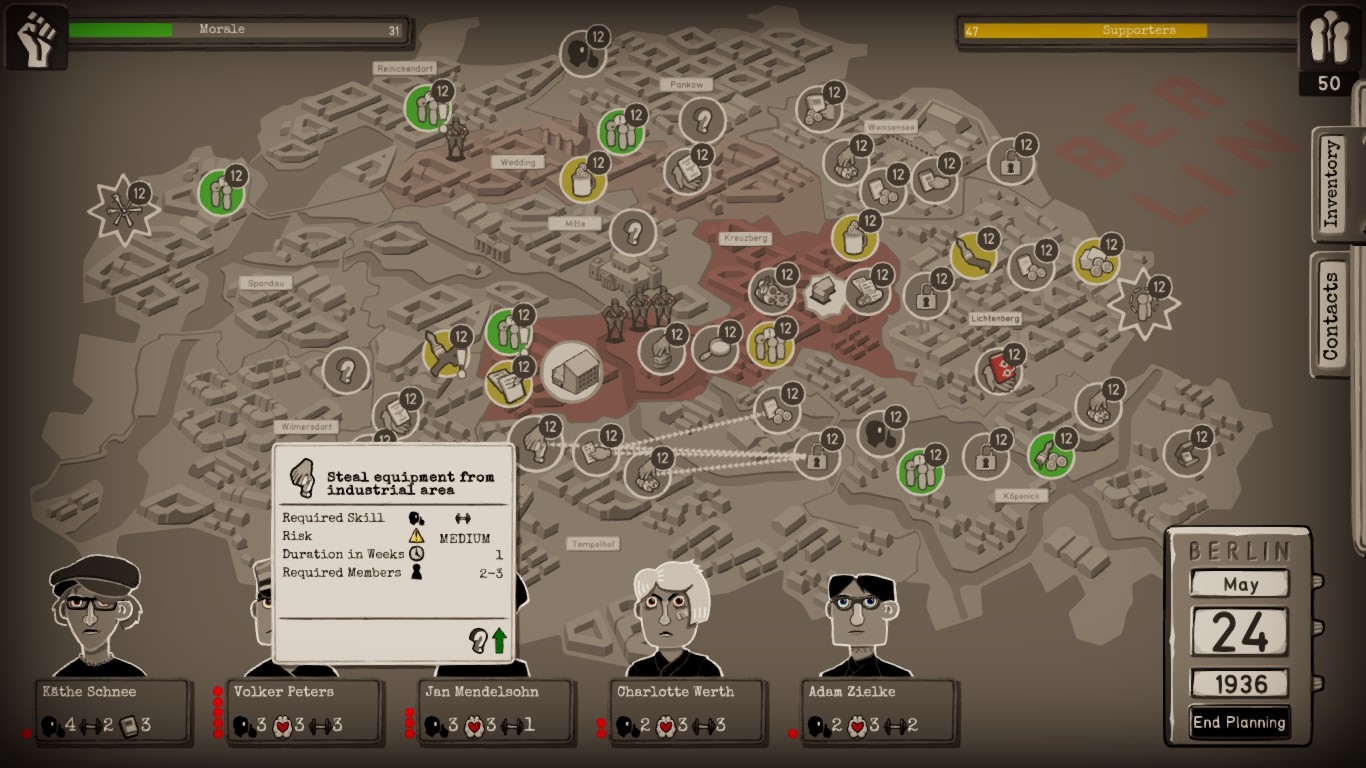 I estimate I'll be parting company with Käthe & Co. in roughly two hours' time. That thoroughly absorbing eleven-hour playthrough probably won't be my last, as I can't shake the feeling that I've failed Germany/Humanity by being too risk-averse and unimaginative in my resistance activities. We've daubed a few slogans on walls, scattered a few squares with Hitler cartoons, and saved the lives of some desperate people, since we formed in 1933, but many grander goals - stealing and using weapons, bomb making, assisting foreign security services... - have somehow eluded us. Did we do enough? I suspect consummate history illuminator Through the Darkest of Times is too intelligent a game to close with a crude performance judgement. Your conscience is the true defeat/victory screen in this one.