The Assassin’s Creed series is no stranger to promoting the wholesale murder of folks with whom you disagree. From battling Templars on the seas of the Caribbean to viciously and repeatedly punching the pope, these games have a history of exacting revenge on all-powerful (yet never successful) shadow organisations. A few hours into Assassin’s Creed: Odyssey, you’ll come across another one. The “Cult of Kosmos” are a group of nefarious masked ne’er-do-wells who are responsible for many of the ills in your protagonist’s life. But this is good, because soon you’ll start hunting them down.

However, first you need to consult a screen that works like a sci-fi version of those detective film conspiracy boards, with strings that connect each cultist to their boss (known as a “Sage”) and each Sage to their mysterious leader. The twist is that when you start your crusade of vengeance, you have no idea where, or even who, any of these people are. In practice, this means there are no HUD markers to guide the way, and really no way of tracking them at all.

But that’s the fun bit. As you explore the seas and islands of ancient, loot-filled Greece, you’ll eventually stumble across a clue, some scrap of evidence or line of dialogue that lets you hone in one of your targets. To start, you’ll have a few vague hints, like the name of an island or city, pinned to the relevant cultist on your conspiracy board. Gather enough information and you’ll be able to track a cultist on your minimap and hunt them with more precise directions. Crossing names off your kill-list and seeing the organisation slowly crumble is immensely satisfying. This is what an assassin is supposed to do. 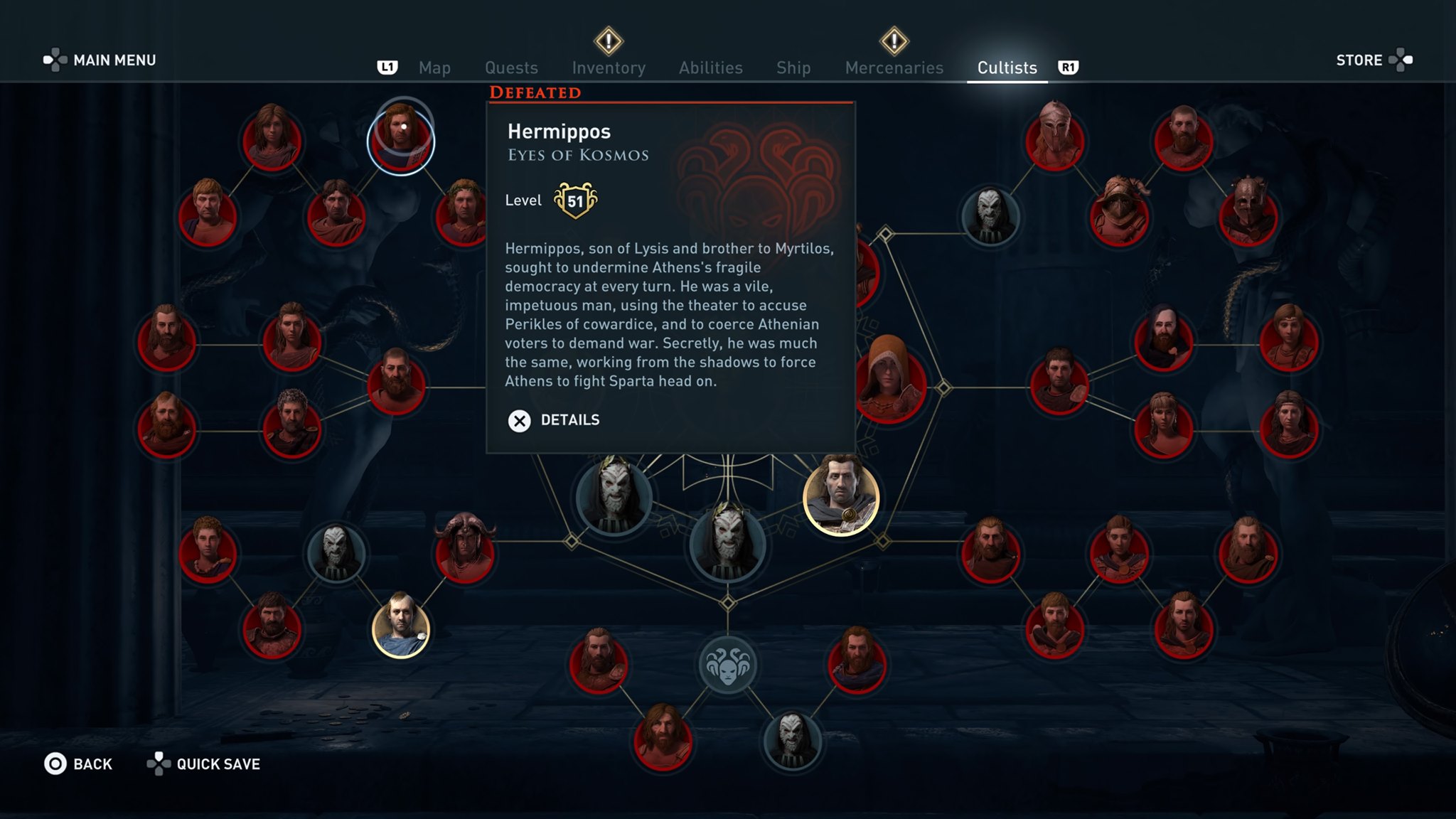 Coming across a new cultist, on purpose or by accident, is often one of the most exciting moments in the entire game. Once, I was caught stealing from a chest and was halfway through murdering every guard in town as part of a blunt cover-up, when a cultist I’d yet to discover decided to wander into the settlement with his retinue of high-level bodyguards. I was torn between trying to kill him or running away. In the end, I decided to continue my violent streak.

One of the key reasons cult-hunting feels so good is that it ties neatly into the rest of the story. Kassandra (or Alexios if you accidentally chose wrong) is meant to be dismantling the cult, and the best way to do that is by exploring the world and completing side quests at your own pace. The earlier Assassin’s Creed games promised freeform, open-world assassination amid all the pope-bashing, but Odyssey is the first game to really make good on this promise, and it's all thanks to the Cult of Kosmos.