Brendan: Hello, John. We have been playing Trials Rising. It is a extreme game about being extreme. Do you have time to talk about motorbicycles and all the amazing flips and flops that they can do?

Brendan: Good. I guess we should lay our Trials credentials on the big mucky table. I’ve think I’ve played them all at some point, but it is the kind of game I play for two days and then throw away. Smiling and happy, but still throwing it aside. They go in my “cheap and cheerful” category, even though they aren’t even that cheap. But I still very much like doing wheelies through its ridiculous levels and trying my hardest to do that bunny hop thing all the pro Trialsists love to go on about.

John: I’m a little more faithful, I think. I started with Trials 2, when Kieron championed it here, and have played all of them since -- although I found Fusion way too frustrating. I tend to plug away at them for a few days, and then a few months later remember that I haven’t played any more, and repeat that over the years between releases. I cannot bunny hop to any useful degree.

Brendan: You have to be very quick on the stick. So here’s my question, considering we are both not full-blown bikerboys: did you like Rising enough to break from your normal plugging away?

John: Almost certainly not. Because it is, if nothing else, some more Trials. It’s defiantly just some more Trials. It may have made finding levels you’ve not played yet ludicrously more confusing with its daft world map, but in the end it’s still just another collection of its excellently designed platform puzzles. More of an excellent thing, but not in any way I’ve perceived, a new thing. 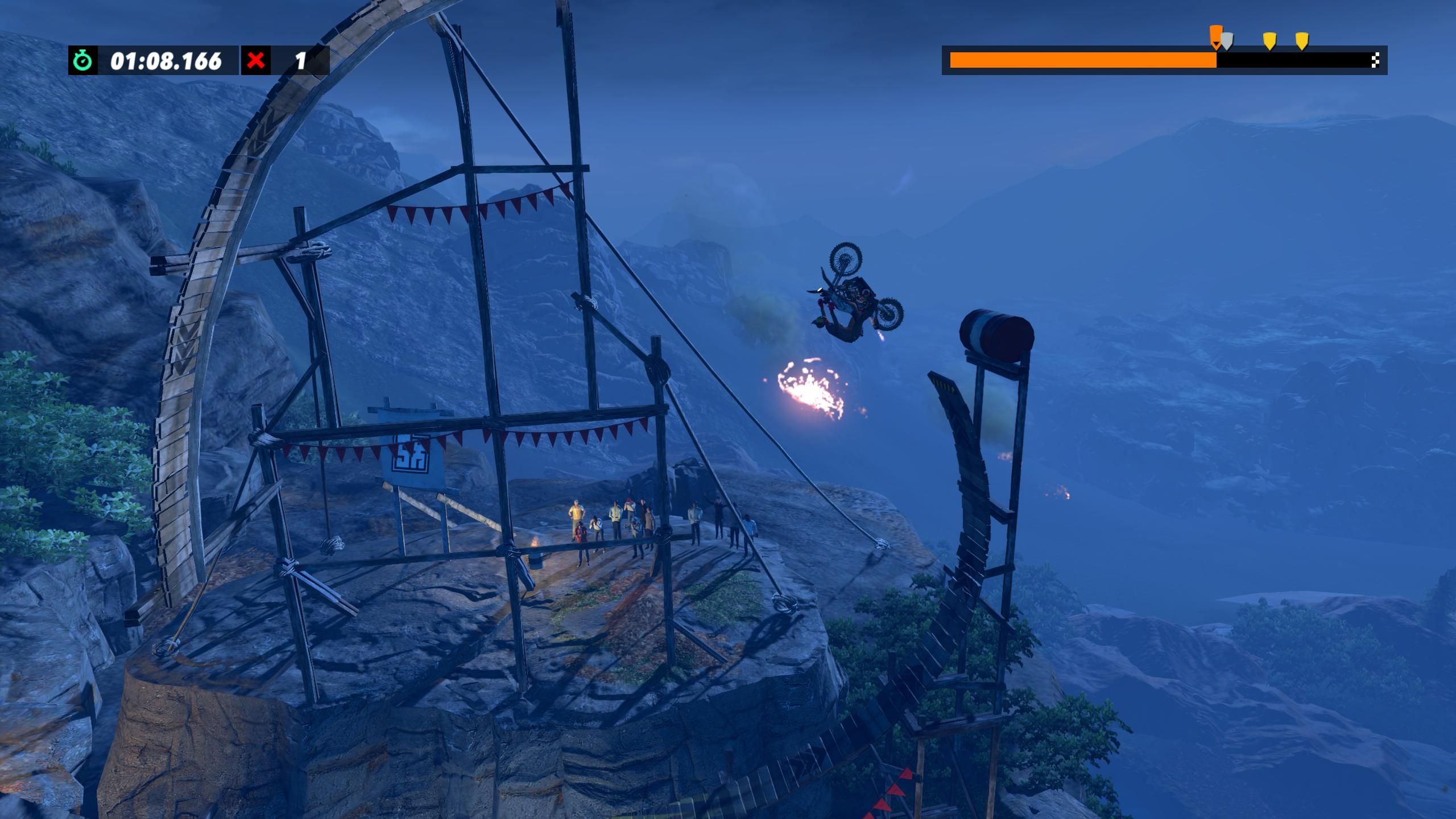 Brendan: This is fair. I played for about four straight hours yesterday and I definitely thought: “I will be satisfied by the weekend.” But one thing I really appreciated was the tutorial in this one. I basically forget everything except leaning physics every time I pick up a new Trials, and I found the “Trials University” tutorial tracks have been helpful. It has a grading system which is pure perfectionist bait. I’m slumming it on Bs for most stuff, but there’s a little voiceover man who’s like: “You can do it, Brendy. Just a bit more practice.” I find it really friendly, much better at getting me back up to speed.

John: Or indeed back down from speed. I agree entirely. I was going to say my caveat on the above was the University, which is the first time I can remember these games actively trying to teach me how to play them. I’d say I’ve always hit an ability wall in the past, and just not known how to get over it. This game literally teaches me how to get over walls. And as a result, I’ve learned my main mistake is always going too fast. And I’m demonstrably better at the game. Also, I managed to get A+ on that lesson about getting forward momentum off the top of vertical ramps, and now consider myself an actual god.

And talking of how friendly it is, I love how when I open up a new section of challenges, the screen says, “You should be proud…” That’s… that’s just so lovely!

Brendan: It is. It’s like an encouraging teacher. But like, a really rad teacher in leather jacket. Not a stuffy man in tweed. A cool, nice one. I mean this literally. There’s a wee rider man who drives parallel to you and shows you how to land on vertical surfaces and stuff. And if you press a button, he gives you more detailed advice. Although sometimes that advice is vague talk about getting the throttle in the goldilocks zone, which is fine because that’s something that is hard to teach.

John: He’s a teacher we’re going to call by his first name after we leave the school.

Have you done the I Fell Tower level?

Brendan: I don’t think so. Let me guess. You fall down a really big hole and then a giant shark eats you and spits you out? 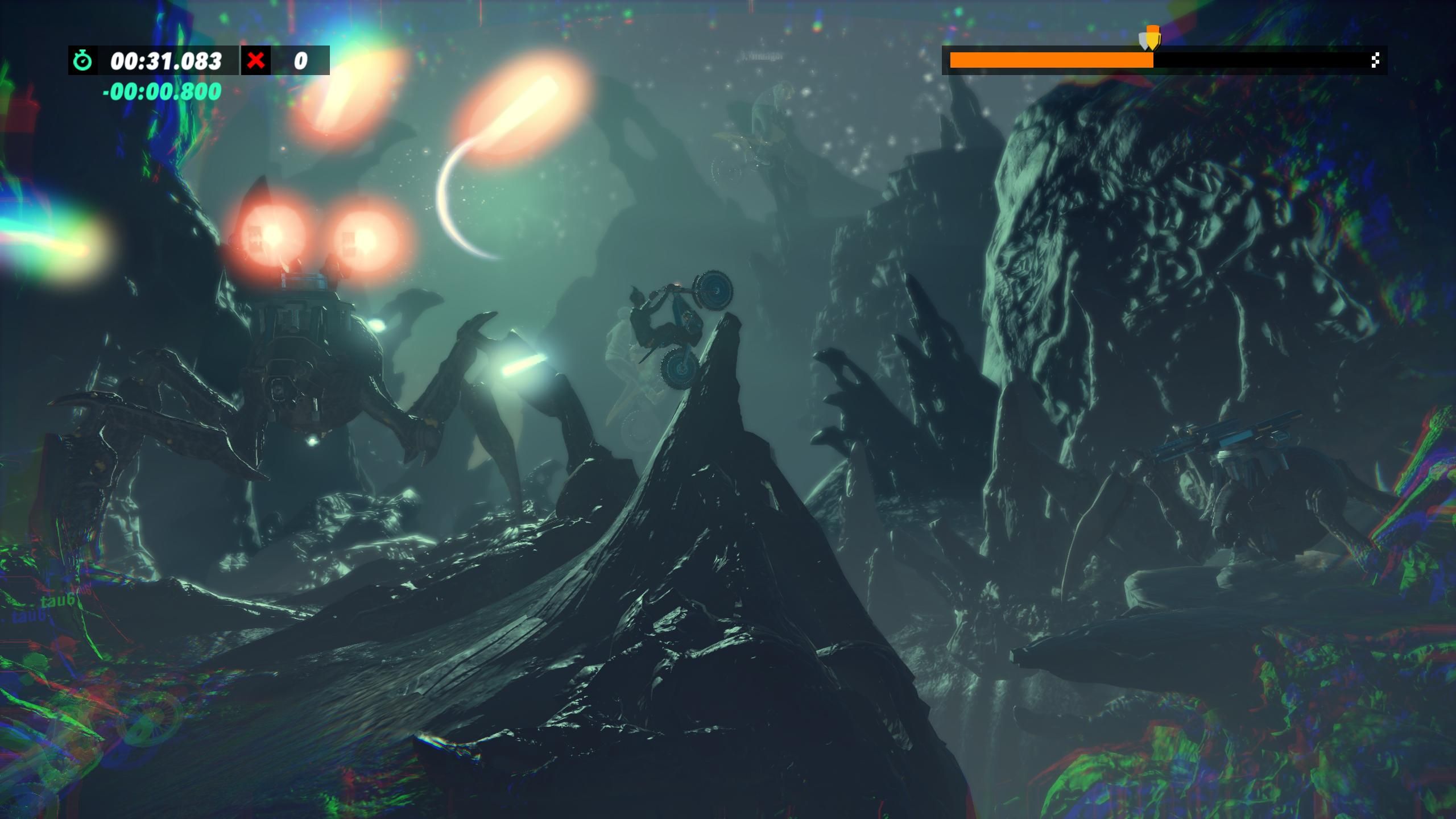 John: That would be an excellent level, but this is set on the Eiffel Tower, and is a ridiculous series of rocket-launched ramps that flip and fling you all about inside the structure, and it’s completely brilliant. My favourite so far.

Brendan: I really enjoy the level in California, when you’re vrooming through a movie studio, and suddenly the whole set changes with a zap into an alien planet. There’s a big alien bug, like a massive Starship Troopers baddie. And it whips its leg at you. And then you pass out the other side and the scene fizzles away, because it was all special effects on green screen. They definitely know how to make a cool level.

John: Also there’s one where you fall through a giant barrel of grapes.

Brendan: Is that not the tomatoes at La Tomatina?

John: No, because after the tomatoes come grapes! In Greece.

So here’s a thing I want to change: The game is packed with ridiculous drops that let you make your character and your bike look very funny, and this is good. But there’s no ability to actually tune the bike, and I find myself desperately wishing I could do this. The second bike you unlock is too heavy, and the third far, far too light. I really want to be able to tweak it slightly, make my perfect Trials bike.

Brendan: Your inner ears must be smarter than mine. Because I barely notice any difference between, say, the first two bikes. I usually choose whatever bike is recommended by the level I’m doing. But I am so balance-deaf that I would be happy enough to do the whole game with the first bike, so long as I could change what it looks like. 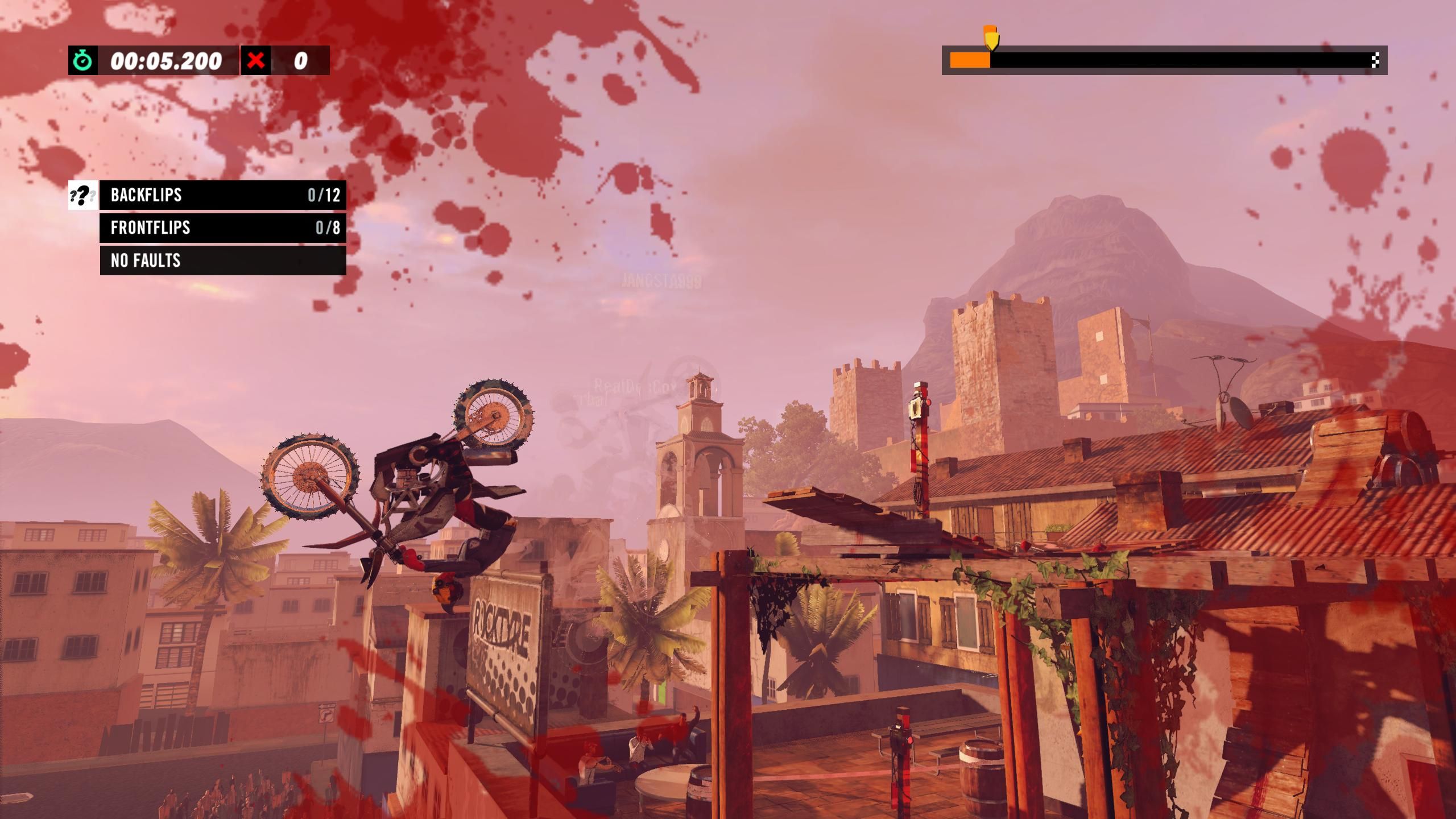 John: I mean, there are some levels, like the big final tournaments, that I cannot complete with the first bike, but easily whomp with the second. Mostly because it has a far more powerful engine.

Brendan: Have you unlocked the pushbike yet? I want to know how that feels.

John: I did. I sold spare clothes until I could afford it. It’s horrible. It’s meant to be, but goodness me, it’s like riding a tissue.

Brendan: Excellent. But you’ve brought up another (probably boring) thing. The loot boxes here are constantly spitting clothes and stickers and bike parts at the player. And everything about it reminds me of the loot boxes in For Honor. You get tons of the same pair of shoes, and sell them all for pennies. At first it feels generous, but then your screen quickly fills up with stuff that’s not really that interesting. It feels more like loot-churn more than a nice reward.

John: I think it gets a bit more egregious with the way it then won’t even sensibly show you which of the seventy billion stickers you own, so you have to crawl through screens and screens of them, clearly deliberately to try to get you to notice things you want to buy. It’s all clumsy, but seemingly for nefarious purposes.

Although I do currently have an excellent yellow face mask with a “D” sticker on top to make it a dunce mask, and of course a shark fin poking out the top of my head. 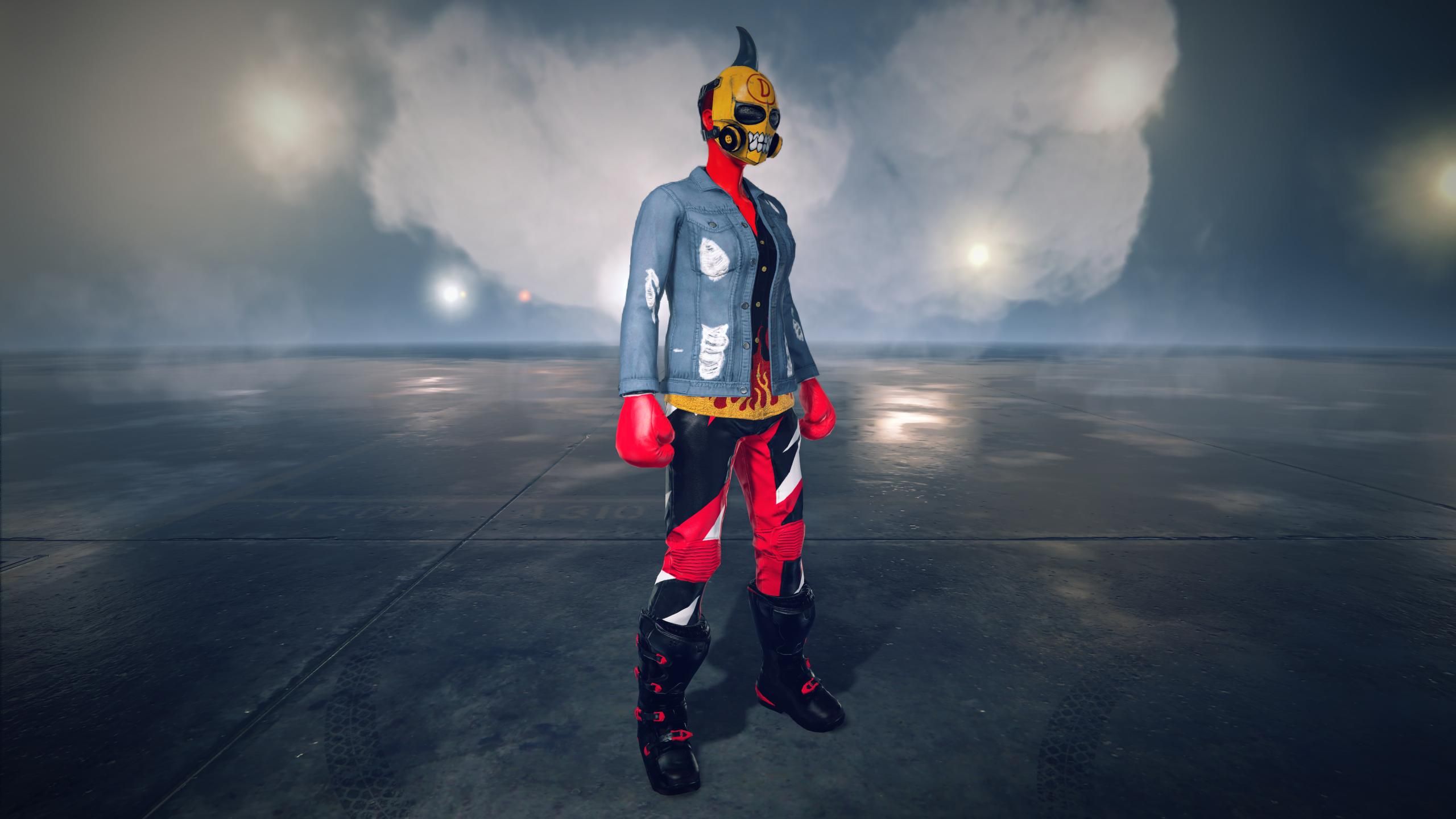 Brendan: I have a very important question. At the end of a level, it shows you which of the four players “competing” got the best time. And often the winning playing will do this animation, where they slap their ass cheeks while a “nerr-nerr-nerr-nerr” sound plays on a kazoo. How do you feel about the bum kazoo?

John: I hate it soooo much. Because I want to skip all that level-over crap, the seventeen screens before it lets me ride a bike again, and then on top of all that, I have to sit through a pretend character wiggling its bottom at me while making an irritating noise. Do you LOVE IT?

Brendan: Of course I love it. It’s why I play the game.

John: I’m still confused about whether the ghosts against which you “race” (mostly you’re not racing them, but they make useful pointers as to how you’re doing) are other real players’ previous runs, or just Ubibots.

Brendan: Yeah, there is definitely a bit of developer trickery going on here. As far as I can tell, there are bots, and you’ll notice them because they have recurring names like “Bronze Baby” and “Average Andy”. But it’ll also throw in some real players sometimes. I’m guessing that it will add the ghosts of other real life players only when those players have set times that fall within a certain window. For instance, if I complete one of the early easy levels in 60 seconds, the game will say: “Okay, this Brendan guy is sufficiently slow as to be a ‘beginner’ ghost that other people can race against.”

John: Bronze Baby often shows up when it’s an actual race challenge, so I figured he’s a bot/Ubi dev run. But then there are the squillions of others with terrible names like terrible people would pick. It’d be so good if the game were picking real player runs like you say. Especially because it could bias your friends list, and then you could get RIVALRY.

Brendan: It’s weird, because I still find myself feeling this dumb sense of “ghost rivalry”. If I’m neck in neck with the ghost of “BoogerBoy69” I will feel like I’m racing against another human. Even though BoogerBoy69 has no idea his ghost is being used for a race. And my ghost is probably not in any of his races. He’s off racing the ghosts of some other people entirely. It’s so silly. But it sorta works for me. 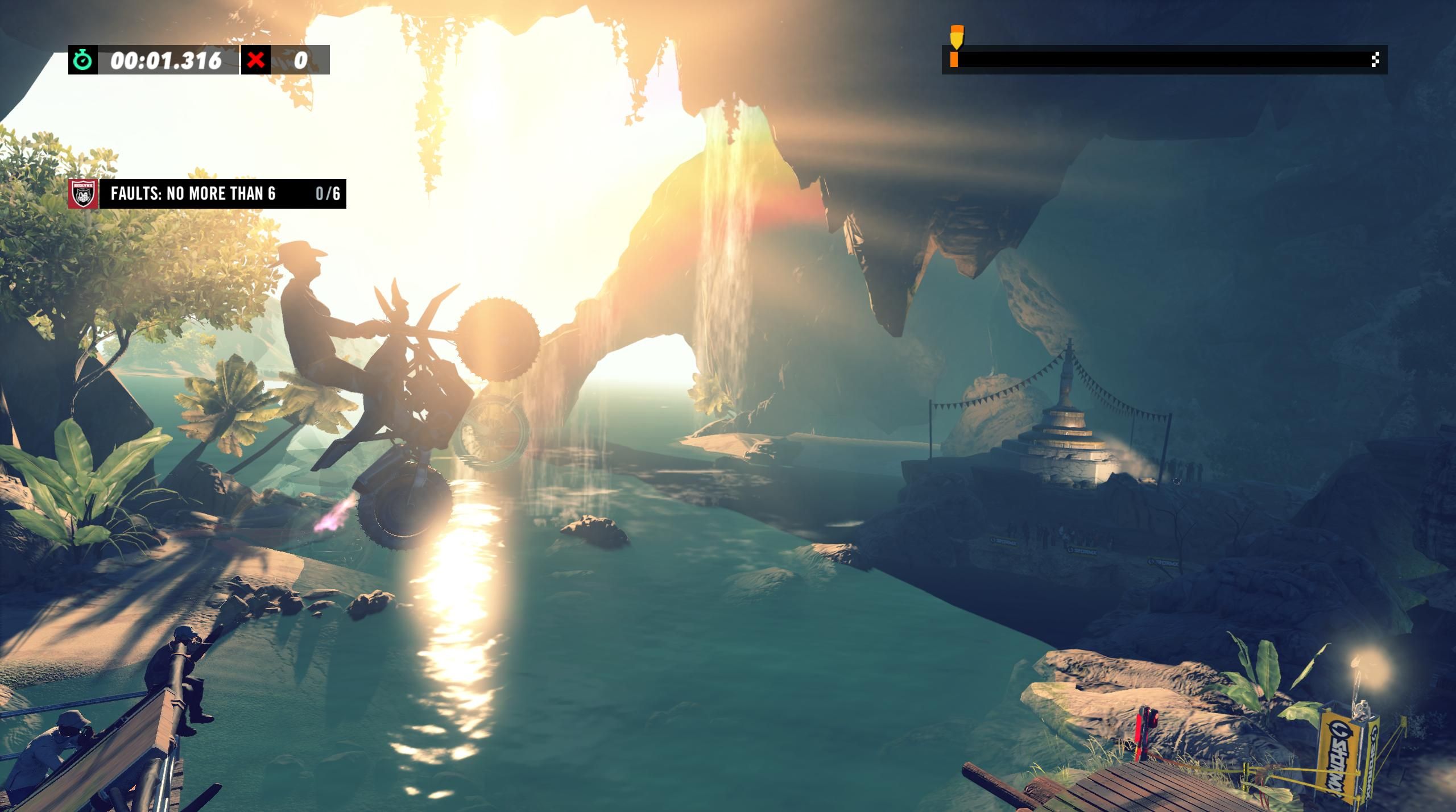 John: Maybe they’re all players who died while playing previous Trials games, and are doomed to haunt the franchise forever more?

Brendan: Have you tried out any of the player-made levels yet?

John: No, other people are AWFUL. 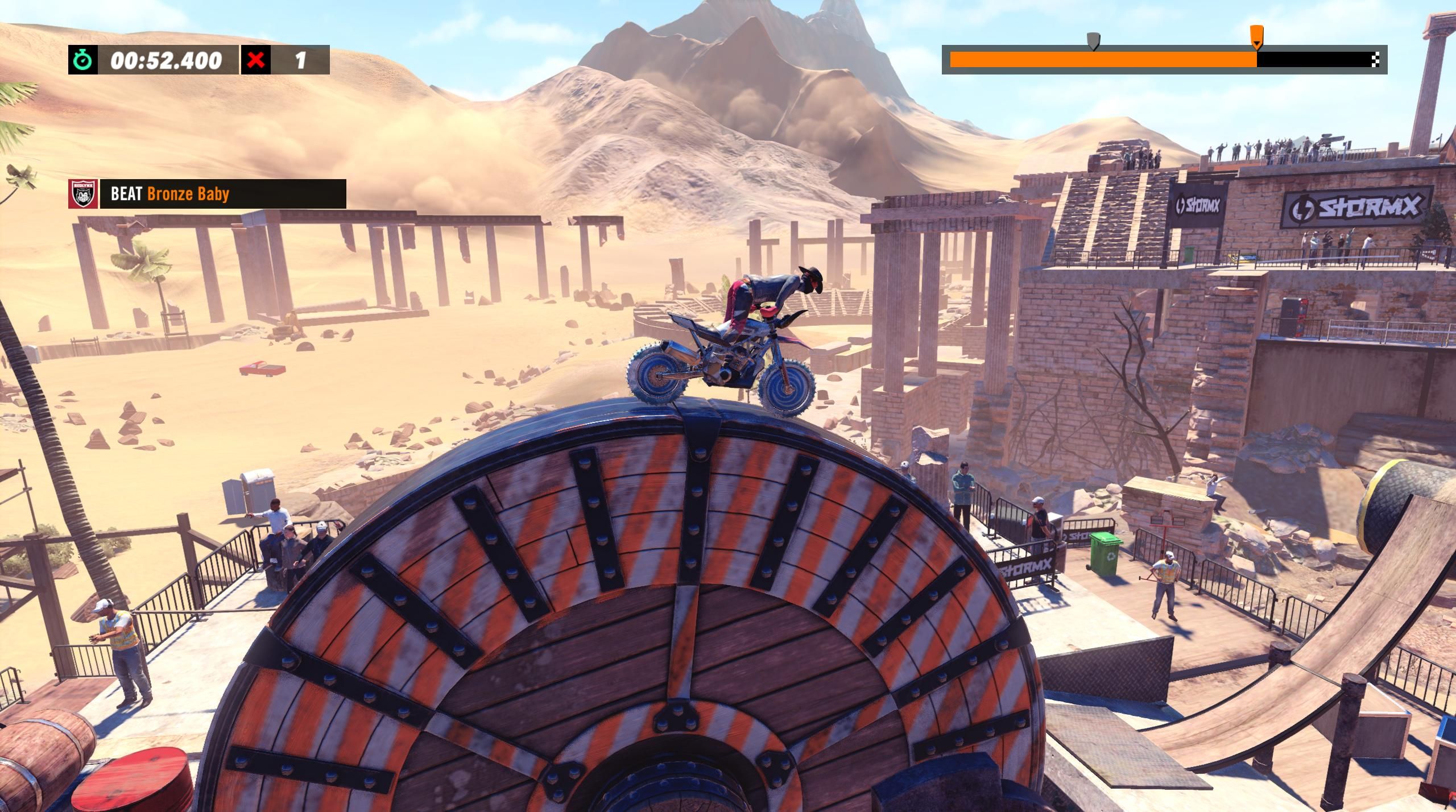 Brendan: “Some people are fine.” There is our verdict on Trials Rising.

John: It’s more of a general verdict for everything ever. We should probably be more specific.

Brendan: “Trials rising is fine” sounds too mean though. Trials Rising is good, I think. Solid stuff. I would say something like “this is the best Trials yet” but I feel like (especially with Ubisoft) you can always just say the latest game in any given series is the best. That’s just how their bit-by-bit improvement seems to go. Although, I agree, it is much better than Trials Fusion, which had a silly sci-fi skin I thought was naff.

John: Yeah, I’d say it’s the best Trials game because it’s the one that works that hardest to teach you how to be any good at Trials. This time, I feel like I’ll hit the difficulty wall a bit further down the line than previously, and that seems like progress. And yet, also, it’s indisputably some more Trials, and this many games into the series, I’d love for it to have developed into something else.