We didn't start the fire. It's always burning since the wheel's been turning. Oh yes, the flames rage on in Sea Of Thieves. Last month's update added that flamin' angry chest and ashen skeletons and whatnot. Next week, the silly pirates game is getting another update and yup, things are still hot around here. This time 'round it's fire traps, a knockback bomb, and new Tall Tale quests setting the course. Rare's new video gets into some of the details we can expect next week in the Heart Of Fire update.

Part of next week's update is a new Tall Tale—the story-style quests that Sea Of Thieves now has. A big element of that adventure will be traps, Rare say. Some of the fiery variety and some of the slicey, it looks. In the video below, you can spot giant swinging axes, circular saws coming out of the floor, and a heck of a lot of flame jets popping out every which way. The story in Heart Of Fire picks up where the past adventure Seabound Soul left off late last year.

Rare also say they've built in alternate routes for the Heart Of Fire tale so that players get a slightly different experience if they replay it. I've just jumped back into Sea Of Thieves last week to start the original story adventures from last year and have found them quite fun. So far, I've gotten books of riddles and hints leading me to various islands to dig up treasure and fight boss-style enemies. As with some of my early quests, I suspect alternate routes through Heart Of Fire mean that you'll have slightly different clues sending you off to different islands in case you set out on the same voyage with different groups of friends as I have.

In the update next week, Rare are also adding something called a Blunder Bomb which can be thrown to knock players back, destroy skeletons in a single hit, and even rock an entire ship. They won't damage the hull though, so you'll need to come up with strategic ways to use them. One possibility highlighted in the video is chucking them at enemy players trying to board your ship. Since the bombs won't blow a hole in your hull, you can safely use them to swat players off your ladders. 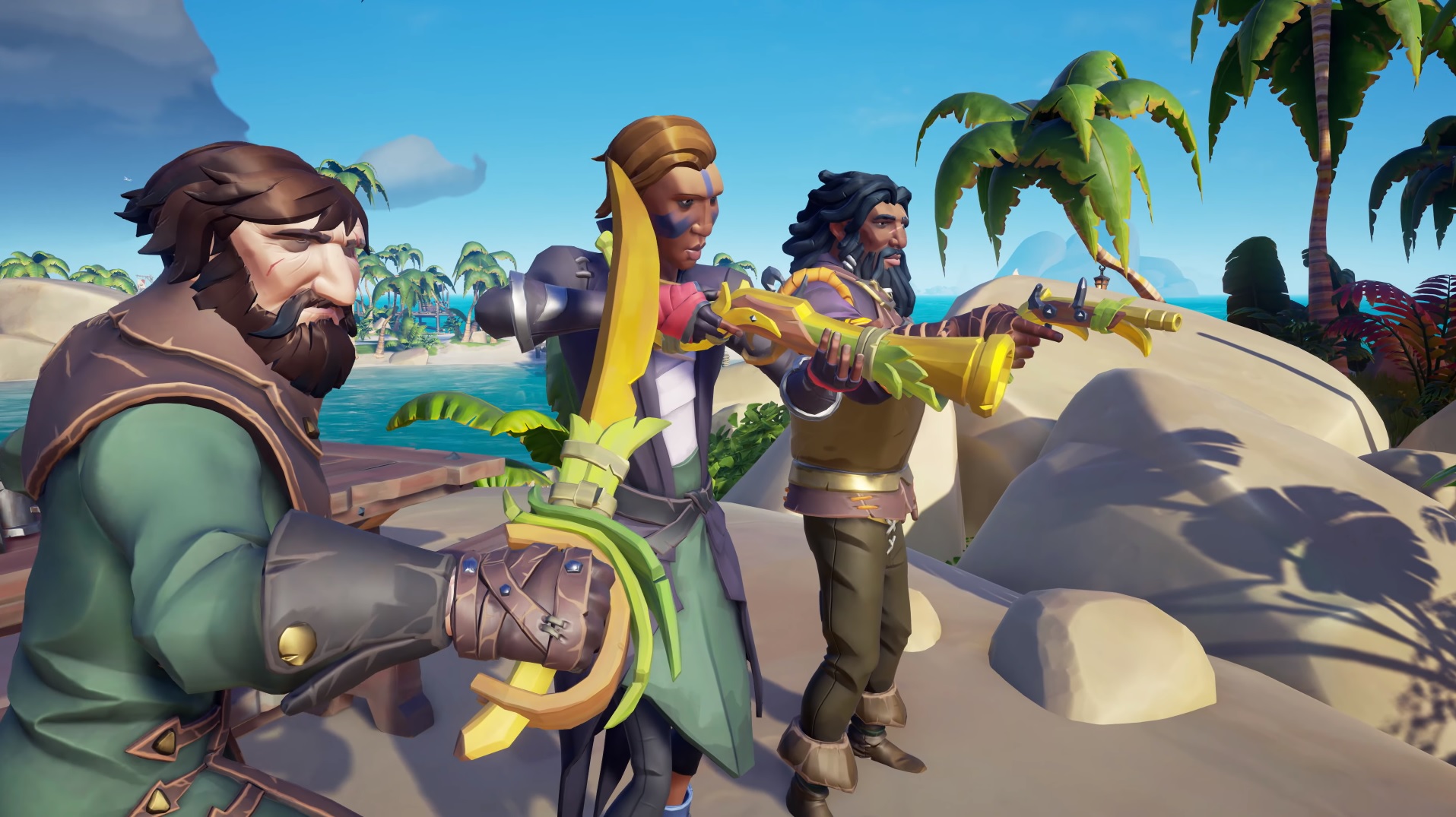 Of course there are also cosmetic items being added, as ya do with live service games. I don't want to be out here slinging premium dress up items—I still haven't tried out that Pirate Appearance Potion I was on about last month—but I do feel compelled to tell you there are banana weapons being added. Rare say banana-themed duds have been requested by players in the past and yeah, they're well and good for Thieves' silly setting.

The Heart of Fire update will launch free on March 11th. As per usual, you can find Sea Of Thieves on the Microsoft Store or get it as part of the Xbox Game Pass for PC that's still up for that intro price of £1/$1 for a month.