Are you looking to optimize your JAK-12? Then read on. A latecomer to Call of Duty: Warzone, the JAK-12 is a real beast when set up correctly. There are a few different builds to run with, given that slugs, frags and dragon breath are all an option here. In this in-depth best JAK-12 Warzone guide I've highlighted the best all-round option for running the JAK-12 when playing Warzone. You'll find info on what attachments to use, and why.

Let's get right into it. The JAK-12 is best used in hip-fire mode, at close to medium range. You will rarely need to aim down sights with this build, instead trying to get as close to your target as possible to down them in either one (at very close range) or two shots. Because of this, I run with the FORGE TAC Marauder suppressor. Not only does it suppress your weapon, it increases the gun's effectiveness when hip firing.

In terms of the barrel, I tend to switch between the ZLR J3600 Torrent and the ZLR J-2800 Influx. Both are solid options but the Marauder increases range, while applying a fairly negligible decrease in movement speed. If you'd like to move faster you can swap it out for the Influx. You'll move faster but will need to get in closer for your shots. The 1mW laser is a great way to up your accuracy here.

One of the downsides to the JAK-12 is its tiny ammo capacity. The 20 Round Mags are essential for this build, allowing you to move from target to target without having to reload. Don't worry about the 32 Round Mags, they are excessive and incur some pretty hefty penalties to your speed.

Finally, we have the Stippled Grip Tape. Equipping this to the JAK-12 will speed up your sprint to fire speed, and as long as you have one of the barrels mentioned previously on the gun, you'll see a negligible change in aim stability. 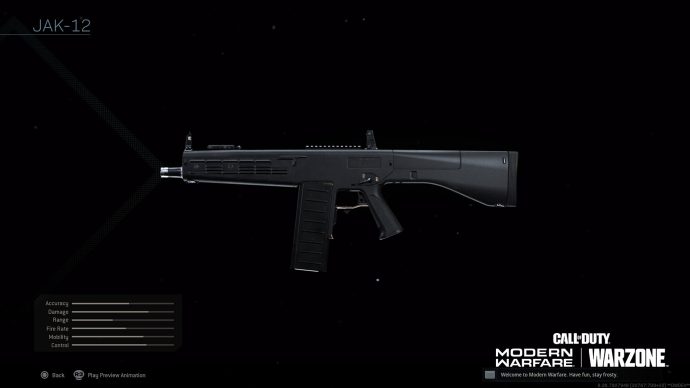 Finally, let's take a look at the perks you should be using with this JAK-12 loadout. First off, equip Double Time so that you can close in on enemies faster. Then, make sure you have Ghost, it's basically an essential in Warzone, especially as the matches progress towards the final circle. Finally, I tend to go with Tracker. It's a great way to pin down enemies in buildings, and with your JAK-12 you'll be pretty much unstoppable in close-quarters.

That's the best JAK-12 loadout I've found in Warzone so far. For a look at how it stacks up against other weapons, head to our Warzone gun stats page. You can also check out our best shotguns guide, to see some other options if you're looking to use a shotgun in Verdansk.