Games about one player character against hundreds of enemies generally have to give you some kind of unfair advantage. In action games, it's usually resilience: getting shot in Call of Duty covers you in jam for 3 seconds but leaves you otherwise unharmed, gunshots in Wolfenstein can be fixed with chicken dinners, and in Doom 2016 punching a demon feels so good it physically mends you.

Stealth games need a different solution, because the fun part is generally over by the time you get shot. That's good - they don't need jam vision or dinner magic. Instead they need a crutch that helps you before things get that bad. And in games about hiding from everyone, that's usually intelligence. Information is power. To evade improbable odds, you need to know more than you reasonably should.

There are loads of forms this unfair intelligence advantage can take, but they all operate on a similar principle. When you know more about the enemy than they know about you, you can factor them into your thinking. Information is the raw material plans are made of, and plans are the heart of my favourite games. So I'm going to sing the praises of some of my favourite intel advantages, and dig into why they work. 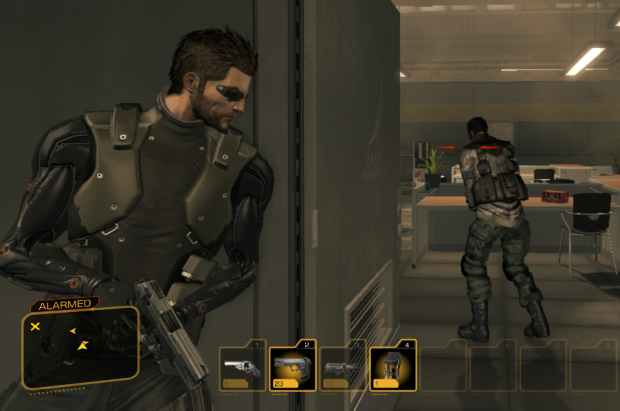 Human Revolution is a first-person game, but when you hold a button to hug cover, it switches to a third-person camera. I don't think most players even recognise this as an intel mechanic, which is great. The external perspective obviously helps you see to what extent you're hidden by the cover you're in, but more importantly, it lets you see the enemies beyond it without any risk of them seeing you. It's a magic, invisible eye giving you vital, real-time info a normal human would never have in this situation.

It lets Human Revolution support stealth approaches just as well as Deus Ex 1 without resorting to the rather silly-looking way the original game achieved it: short-sighted enemies. When you play Deus Ex 1 today, enemies being blind beyond 30 metres feels like a charmingly archaic quirk. It would have been a little harder to swallow in a slick 2011 revival. 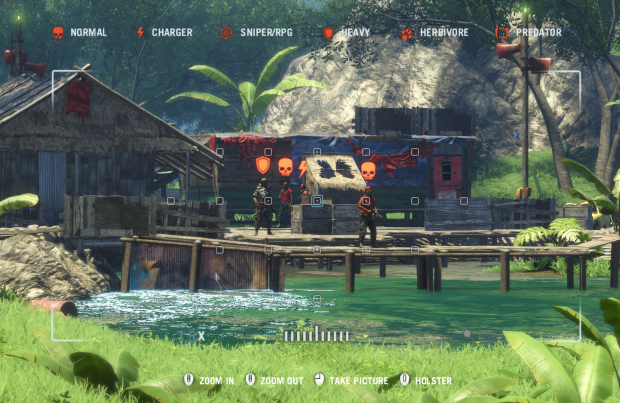 In most Far Cry games, you can peer at enemies from a distance to 'tag' them. Once tagged, they're tracked on your minimap in realtime, and in the latter games, you can see their silhouettes through walls. I think this is one of the most elegant and effective mechanics in stealth games.

It makes no sense, of course, but it manages to achieve two almost contradictory things at once. Firstly, it gives you a huge intel advantage, which as I say, is vital for fun intentional stealth play. But a lot of ways of giving the player extra information relieve them of the need to behave like a hunted, outnumbered survivor would. If you can see through walls, for example, you don't need to peek before you round a corner. Far Cry's tagging is genius because it both gives you an intel advantage and increases your motivation to scout.

In real life, if you had to infiltrate a camp of enemies, you'd absolutely want to get a distant vantage point and watch them before you approach. The information you gained would be partially out of date by the time you snuck in, but it's so life-or-death that it would be worth hours of uneventful scouting to have some idea of numbers and usual locations. In games, if observing enemies doesn't tag them, it's usually not worth your time to do that kind of extensive recon - you're rarely invested enough that outdated information is worth the time investment.

But because Far Cry rewards your scouting with a special kind of super-intel - real-time tracking of every enemy you know about for the rest of their life - it's profoundly worth it. It's also faster and more fun that it would normally be - the tagging is automatic and rather satisfying. And it still leaves gaps for surprises: you might have missed someone who was hidden from your scouting angle, so you still need to be on your toes as you sneak in. 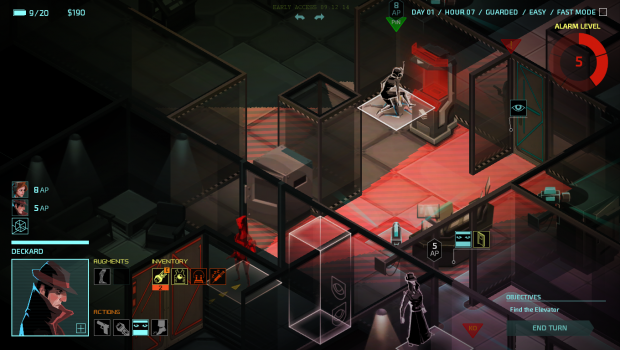 Plenty of games show enemy vision cones. In Invisible Inc, a turn-based stealth game, you can tell whether an area is being watched by an enemy even if you can't see the enemy themselves. Areas being seen by guards or cameras are tinted red, and if you go there, you'll be seen. More importantly, the reverse is true: if the square's not red, you can be absolutely sure it's safe to move there. That saves endless tedious scouting and moments of brutal bad luck - looking at you, XCOM. And it still stops short of perfect information: you can only tell if an area's being watched if you can see the area itself. You're still discovering the level room by room as you progress, and it's still dangerous to open a door into an unseen room. 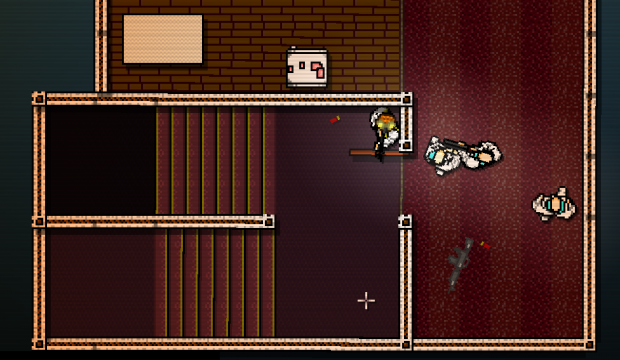 I think of Hotline Miami as an ambush game, which is different to a pure stealth game, but it has the same requirement for an intel advantage: imagine bursting into any room in this game blind. Hotline Miami's solution is simple and effective but surprisingly rare: you just see everything. Enemies are always visible, walls don't block your vision, there's no fog of war. That lets you come up with a plan to kill everyone in a room before you set foot in it. And it doesn't rob the game of surprise or challenge, because it's so skill based: Hotline Miami lives in the gap between your plan and your ability to execute it.

There is one limit to your intel, of course, which is the screen. You can't zoom out, and you only pan the camera a little. Personally I think that's a flaw - it always sucks to get shot from off-screen - but I appreciate it's not easy to solve. In Heat Signature, we give you perfect intel and let you zoom out as far as you like, but it creates an unhappy tension between wanting to see all the enemies but not wanting everything so small on screen. We ended up having to change the way levels are generated to ensure all the enemies you need to worry about are within a neat rectangle, so you can stay relatively zoomed in and see them all, but it's not a perfect solution. 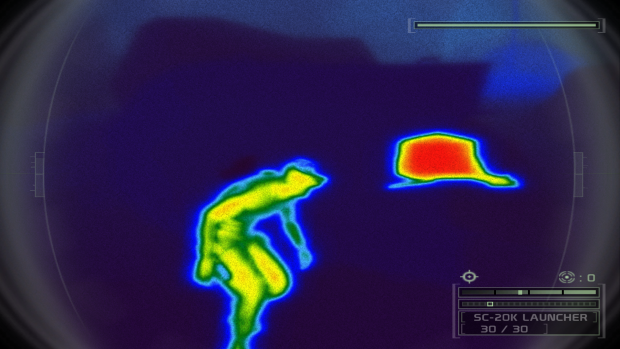 'See through walls' vision modes have a long and patchy history in stealth games: it's an incredibly useful power, but it's hard to make it work in the game's existing art style. So either you spend all your time in neon clown vision, or the game makes it so awkward or costly that using it is no fun.

Splinter Cell's thermal vision is one of my favourites, not because of the information it gets you, but because of the information you lose. It's beautiful in a surreal way, but I don't spend all my time in it because frankly I can't see what the hell I'm doing. Basic level geometry and important detail is lost, so it's natural to flick back to a more conventional mode when you don't need it. And when you do, hunting oblivious enemies by their heat has obvious Predator appeal.

This shouldn't need a conclusion but it looked weird without one

In my own games I tend to start by giving the player perfect information, and only hide some if I see a specific reason it will make things interesting. In Gunpoint, I never did - you can see everything at all times, because the more information you have, the more intricate and interesting a plan you can form. Any unknowns hinder that, make it less worthwhile to think ahead.

In Heat Signature, too, you can see all enemies at all times. But we do hide what's in weapon crates, just because that makes all of them worth getting to. If you could see what's in them, any that aren't useful to your current character would be dead weight, and all of the interesting things you might do to try to get to them would never happen.

Writing this, picking apart the information systems I love most, I realise I do like games that hide information from you, but only if they successfully make gaining intel a fun game in itself. In Far Cry games and in Human Revolution, I nearly always end up with perfect information on the situation I'm in - I hide and scout and peek and track until I know everything I need to. So hiding that info doesn't make the 'action' part any more interesting for me. But those games make gathering intel so fun, and fit so well into the fantasy of who you are in this world, that hiding it initially is worthwhile.

I'm probably not going to copy that. As an indie, any sentence of the form "make X a fun game in itself" strikes a chill through my heart. Making one game fun takes me three fucking years. But it's good to understand why it works, and it gets me wondering about a game where intel gathering is the game.