XCOM Chimera Squad takes place in City 31, a colony that is always at risk of becoming unsettled. Enemy factions are stirring up unrest in each of the districts and it's up to you to keep the peace. You can recruit field teams to assist with this, as field team abilities can be used to reduce anarchy or freeze unrest from building up in a particular district.

Our XCOM Chimera Squad field team guide will explain how the city map works, what field teams are, and how to unlock the field team abilities to help manage unrest and anarchy. There is also a full breakdown of all three field team types and what they give you.

The City map is split into nine districts. Each district is a location for one of several mission choices for your XCOM agents to address daily. When you don't complete a mission or situation in a district, that district can increase its level of unrest up to a maximum of five levels. Situations are non-combat options that give you resources upon being selected.

It's worth remembering that normally any missions or situations you don't choose to complete go away after that day, so you won't be able to do everything on the city map screen at any given time. The exceptions to this are investigations, which are locked until you gather enough Operation Reveal points. You normally get one Operational Reveal point a day but they can also appear as rewards for completing missions. Locked investigations still build up unrest.

Once a district reaches maximum unrest it will begin glowing red. City anarchy will then build up one level per day for each district that has reached maximum unrest. Anarchy missions will also begin appearing, where your agents must deal with the chaos in the district. Reducing unrest is the key to keeping the city from losing control. If the city anarchy level reaches the maximum level, you will lose the game.

As you progress through the game, the rates that district unrest and overall anarchy build up will increase dramatically. These increases take effect after taking out each of the three factions under investigation by Chimera Squad. 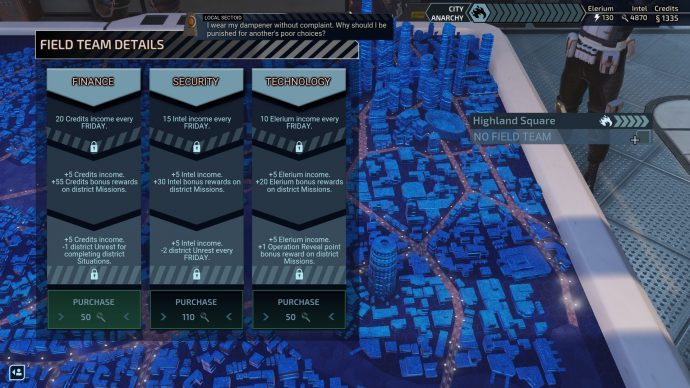 What are field teams in XCOM Chimera Squad?

Field teams are invaluable resources in XCOM Chimera Squad. They can give you more resources (credits, Intel, or Elerium) to spend on your agents, as well as help manage your districts at higher ranks. Field teams require Intel, the cost of which goes up by 15 Intel every time you buy a new field team of that type. Rank upgrades also increase in cost by 15 Intel each time you purchase that rank. The initial Intel costs are as follows:

To get as much Intel as possible, try to subdue or otherwise render enemies unconscious during missions. This will increase the percentage chance of gaining bonus Intel to spend. There is also a couple of XCOM Chimera Squad spec ops options that give you Intel or even free field teams, and you can occasionally find Intel or new field teams as a reward for completing missions and situations.

It is entirely possible for certain missions to permanently downgrade your field team's rank if you ignore the mission, so weigh up whether or not you can take that hit to your Intel before deciding whether to take the mission or not.

Here are all of the field team types and the rewards they give for setting them up or upgrading them:

How to unlock field team abilities

When you've satisfied certain conditions, such as recruiting a certain number of field teams, new field team abilities will be made available to you via the city map. They're all at the bottom of the city map screen and each one has a set cooldown time once used. My best tip for field team abilities is to stagger when you use them, as using them all at once may leave you open to unforeseen increases in unrest or anarchy levels that you may not be able to react to. We've listed all four below: 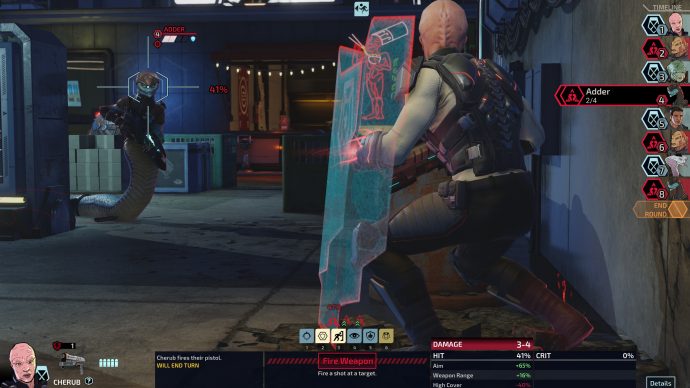 Thanks for reading our XCOM Chimera Squad field team guide. You should now have all the tools at your disposal to ensure that city unrest doesn't become a major problem. Do check out the rest of our guides below, which includes details on agent builds, as well as other key info.