There’s a business management minigame in Yakuza: Like A Dragon that’s pretty overwhelming when you first jump in. It’s an onslaught of menus and stats and bars which don’t exactly explain much of what’s going on, or what you’re meant to do for that matter. Below I’ll explain how management works in the game and how best to climb the business rankings.

Here’s how the management minigame works in Yakuza: Like A Dragon.

What is business management in Yakuza: Like A Dragon?

Towards the end of Chapter 5 you’ll be introduced to Eri outside of Otohime Land (don’t worry, it’s unmissable). This is where you’ll be introduced to Yakuza: Like A Dragon’s business management minigame, which’ll see you taking over Eri’s “Ichiban Confections” business and attempt to climb the shareholder rankings. Eventually you’ll be running multiple businesses, employing people, investing in your properties, and tackling Shareholder Meetings with ease. And most importantly - raking in plenty of cash.

A quick overview of how management works

First up, you can’t invest your own personal money into the business. And you’ll only receive personal bonuses once you’ve successfully completed a Shareholder Meeting. This is something I’ll get into just below.

Management is played out over two phases. You’ve got the day-to-day business stuff: hiring employees, assigning them, investing in properties, and hopefully turning a profit when you open for business. Opening for business is as you’d expect: inviting customers into your store and hopefully earning some yen in the process.

Once you’ve opened for business a total of four times, you’ll then tackle a Shareholder Meeting to end that sales period. If you’re successful here, you’ll earn some personal profit, hopefully turn a decent business profit, and climb the Shareholder Rankings.

This is all something we’ll get into below, I just wanted to lay the foundations a bit more before we get stuck in. There’s a rhythm to how this management minigame works, and it won’t be long before you get ‘it’, I promise!

Let’s begin with the basics

Before we dive into the basics of employees, let’s take a look at Ichiban Confections in the image below. Forget everything else for now, just note the three bars at the bottom right which show: product, service, and notability. 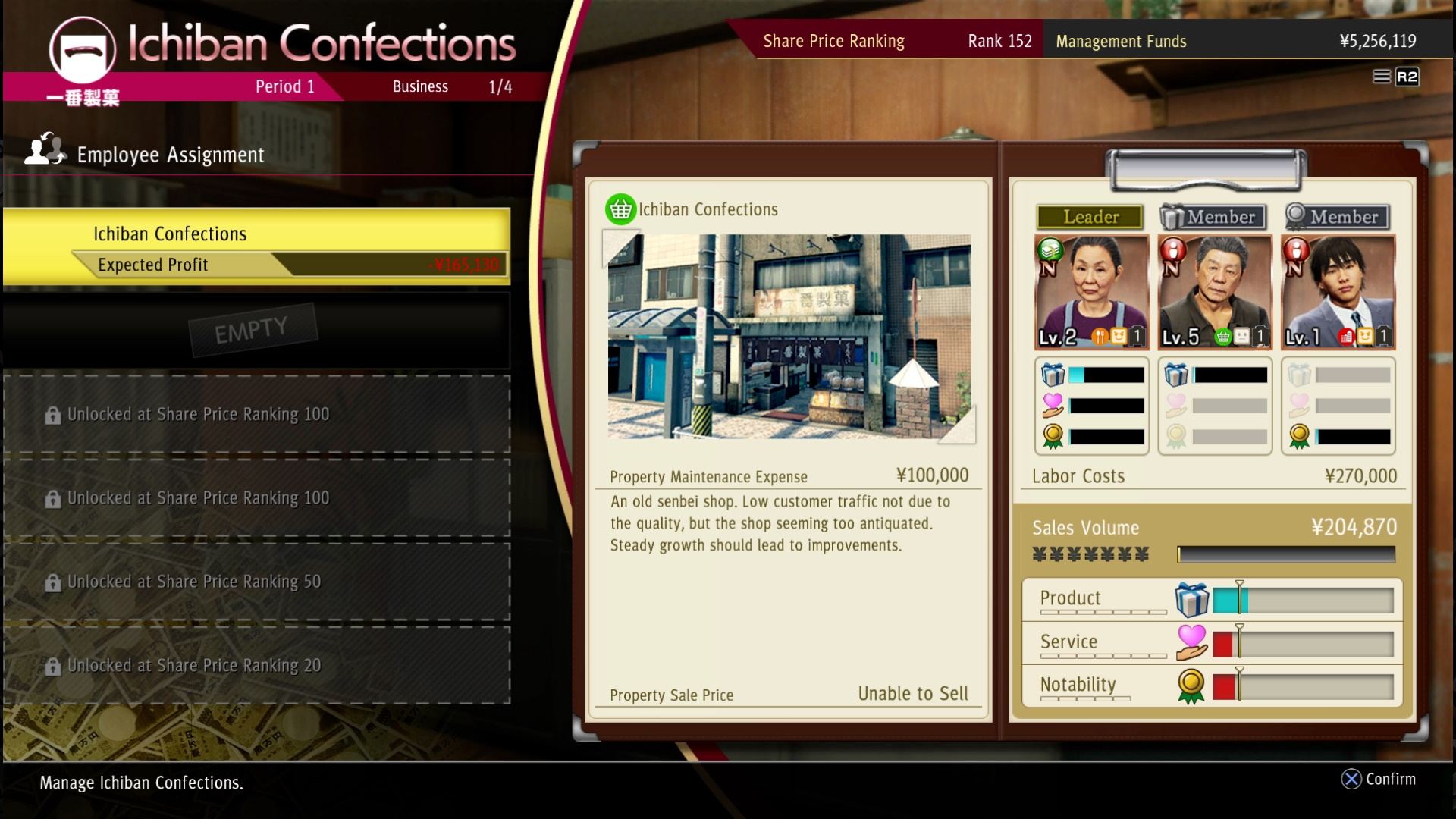 Now, look at the three employees above these bars. For each property (Ichiban Confections in this case), you can assign a total of three staff. One will be a leader, positioned on the left, while the other two are just regular staff.

Each employee has stats. Let’s start from the top of their portraits.

The leader will contribute all three of their bars/stats to the business (the big bars at the bottom).

So, this leader has contributed a fair amount of product which has helped raise the bar at the bottom past the vertical line and into the blue. Blue is good! Blue means you have that part of the business covered.

The other two members of staff don’t contribute all of their stats, however. 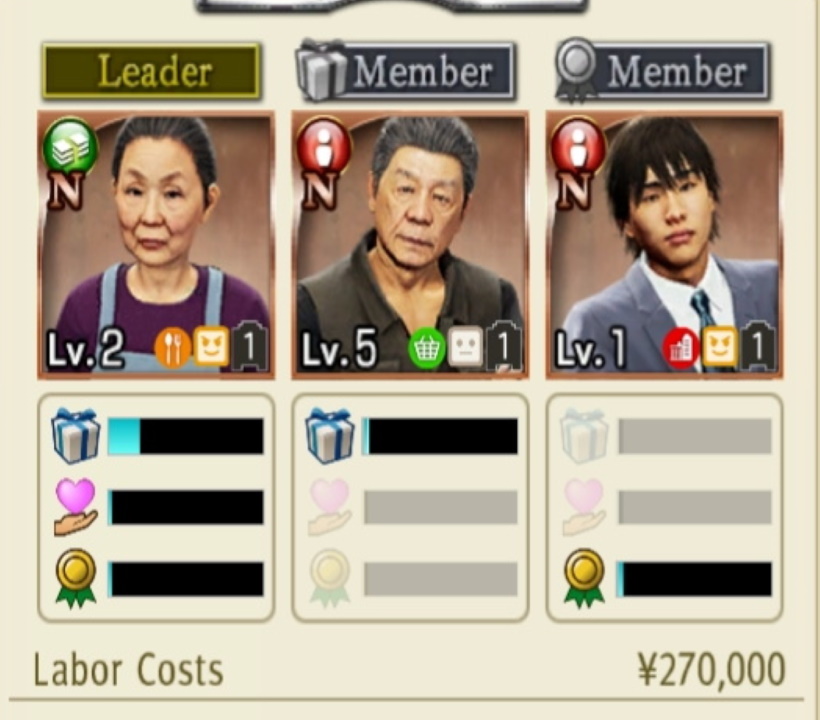 Take the old fella on the left, and look at the bars just below his portrait. Look at how the heart and the medal (service and notability) are greyed out, but the present (product) isn’t. This means he’s only contributing his product stats to the overall business.

Take what we know from above, and this means the other guy in the suit is only contributing notability. Essentially, they’re both not offering a great deal.

Now we can see why product is fine, but service and notability aren’t.

Assigning employees to get everything into the blue

What you want to do with every property is assign a mixture of three employees to make all the bars hit blue.

In the case of Ichiban Confections, look at how I’ve swapped some folks out to do so. 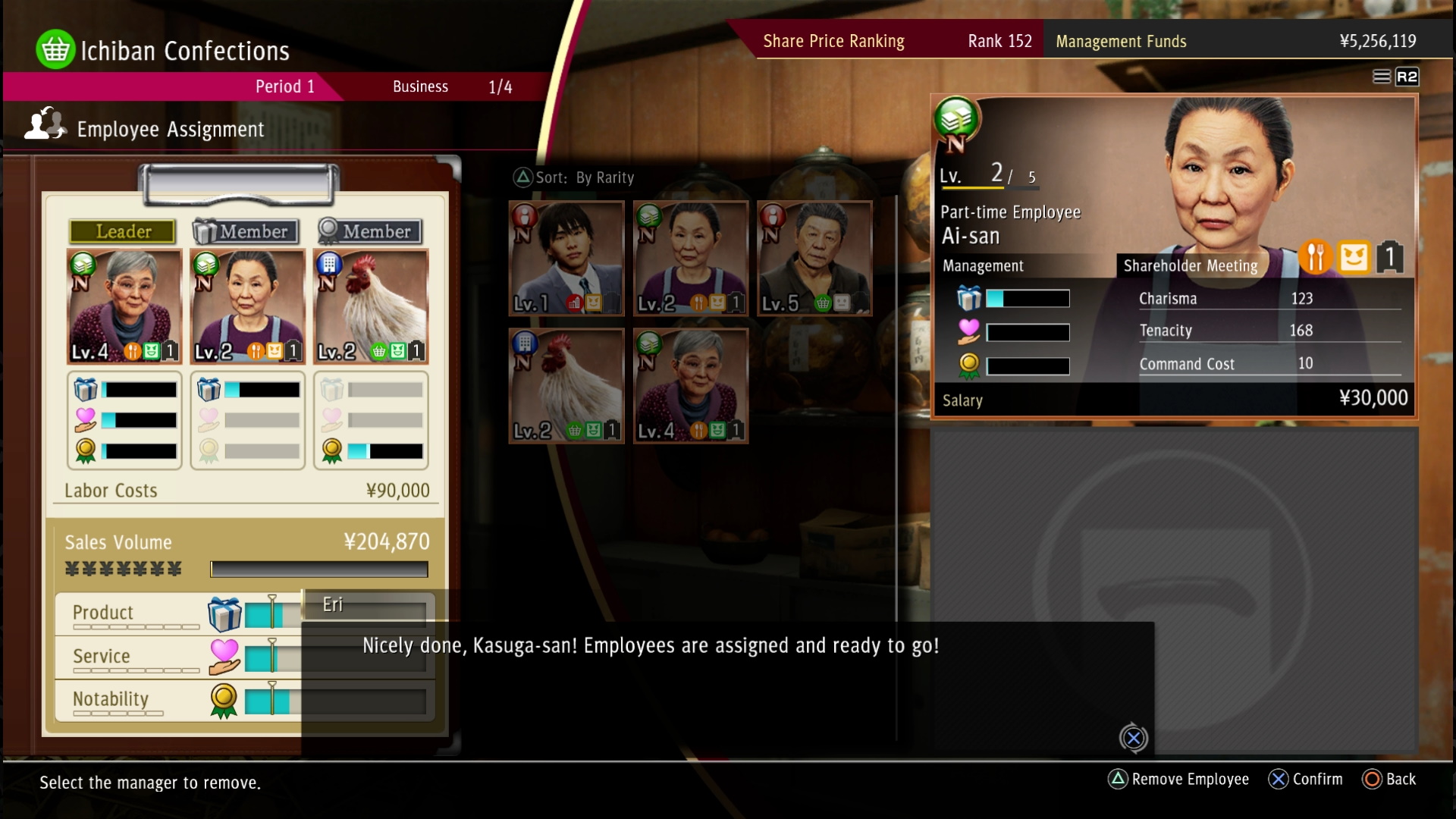 With each business you want a leader with strong overall stats, as they’ll contribute everything to the overall business.

In this case the leader contributes plenty of service to bring it straight into the blue without any need for help, while bringing the other two bars up a bit.

This means the other two employees have more than enough product and notability to help her tip these bars into the blue. Some employees are very good at one thing, while others are semi-decent at everything. Be aware of all this when swapping them around.

Click “Hire” to hire new employees. Just bear in mind how much you’ll need to pay them and whether the stats they bring to the table are worth it. 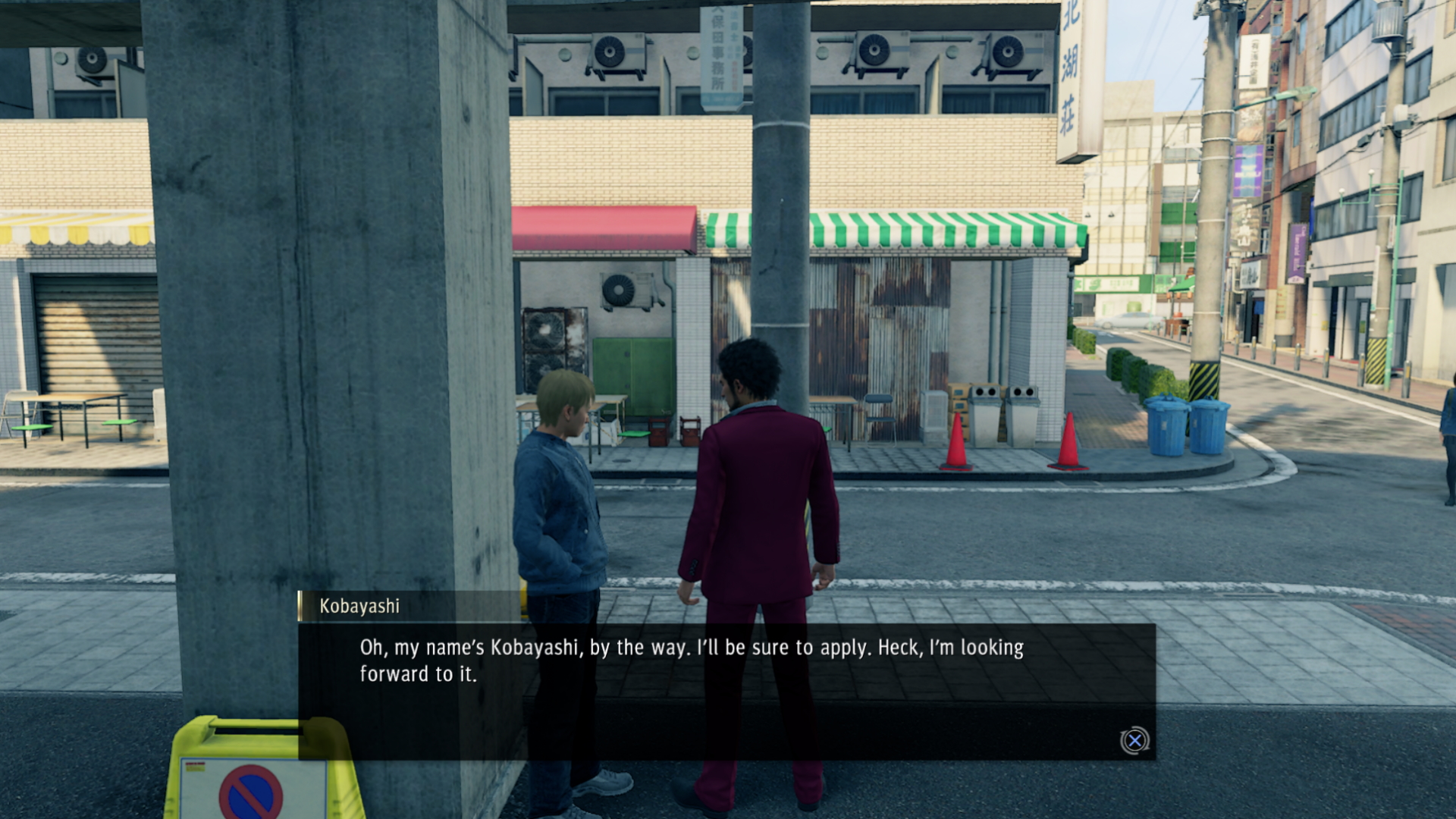 There are also potential employees out there on the streets of Yokohama. Talk to them and they’ll often request an item in exchange for employment.

It’ll come as no surprise that you’ll need to pay your employees wages. This will come off your total sales.

You’ll also have to pay Surplus Labor Costs ie. the wages of employees you’ve not assigned to a property. Again, this’ll be deducted from sales.

If you realise you’ve got a tonne of employees not doing anything, or if you’ve hired one that’s much better than their ‘equivalent’, you can lay them off to reduce labor costs. Just be wary of laying off loads of folks as you may need them when you invest in other properties!

You can also put your employees through different forms of training. This’ll grant them XP to level up their stats. The most important thing to bear in mind here is the management training. Most employees have a max level of five. Put them through this training and it’ll up their max level to ten, so they can continue growing stronger as you open for business.

When you buy a property, note a few things: the product, service, and notability bars, the number of employees you’ve got, and the stats your employees have. 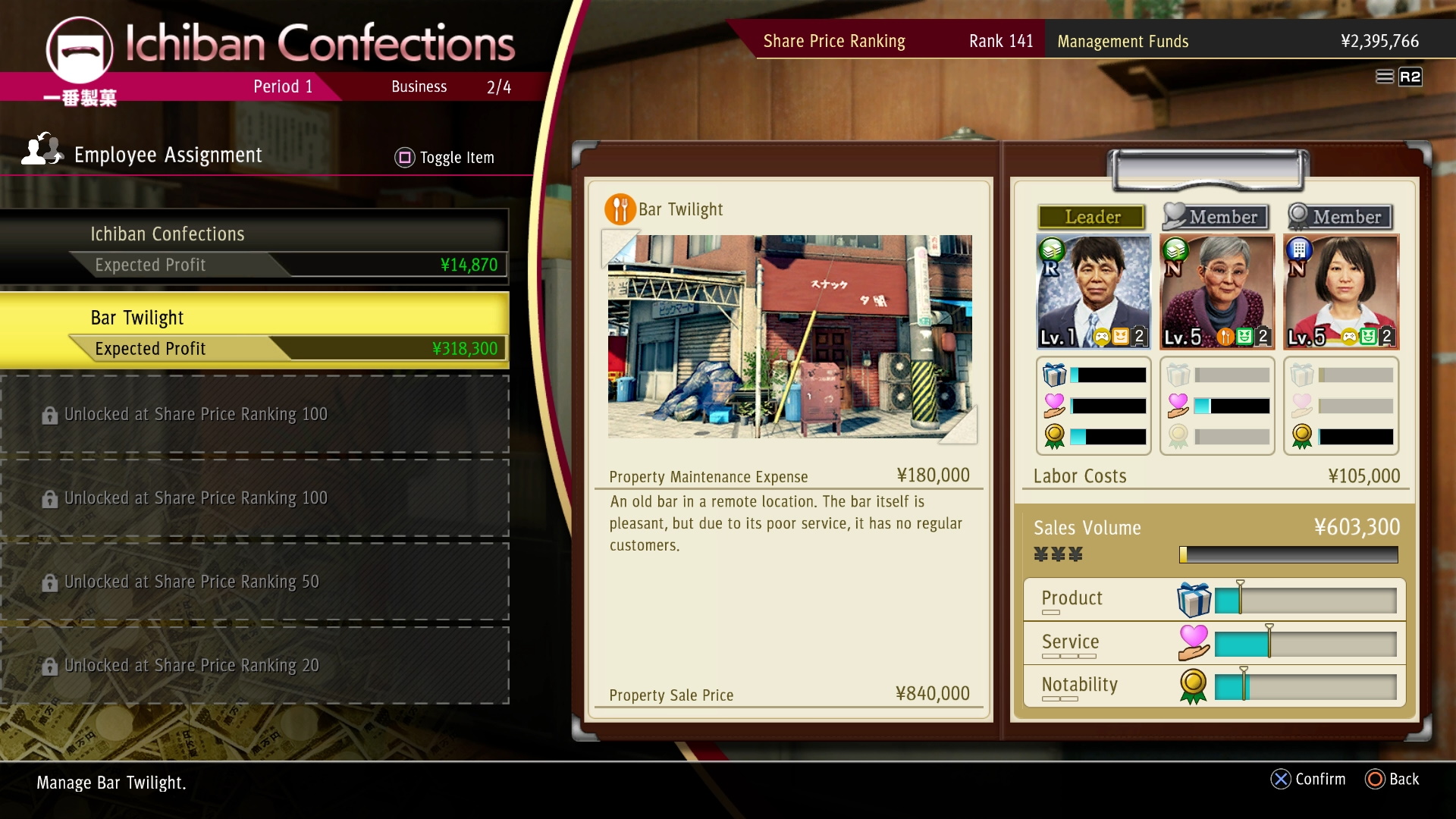 It’s no use buying a property if you’ve not got the staff to fill them.

Once you’ve bought a property, make sure you assign members of staff to fill those bars to blue.

You can invest your management funds into existing properties.

Investing in Sales Volume will increase the amount of income you’ll earn when you open for business. Just be aware that it'll push the vertical line across for each stat. This means it'll be tougher for your employees to contribute to reach the blue. 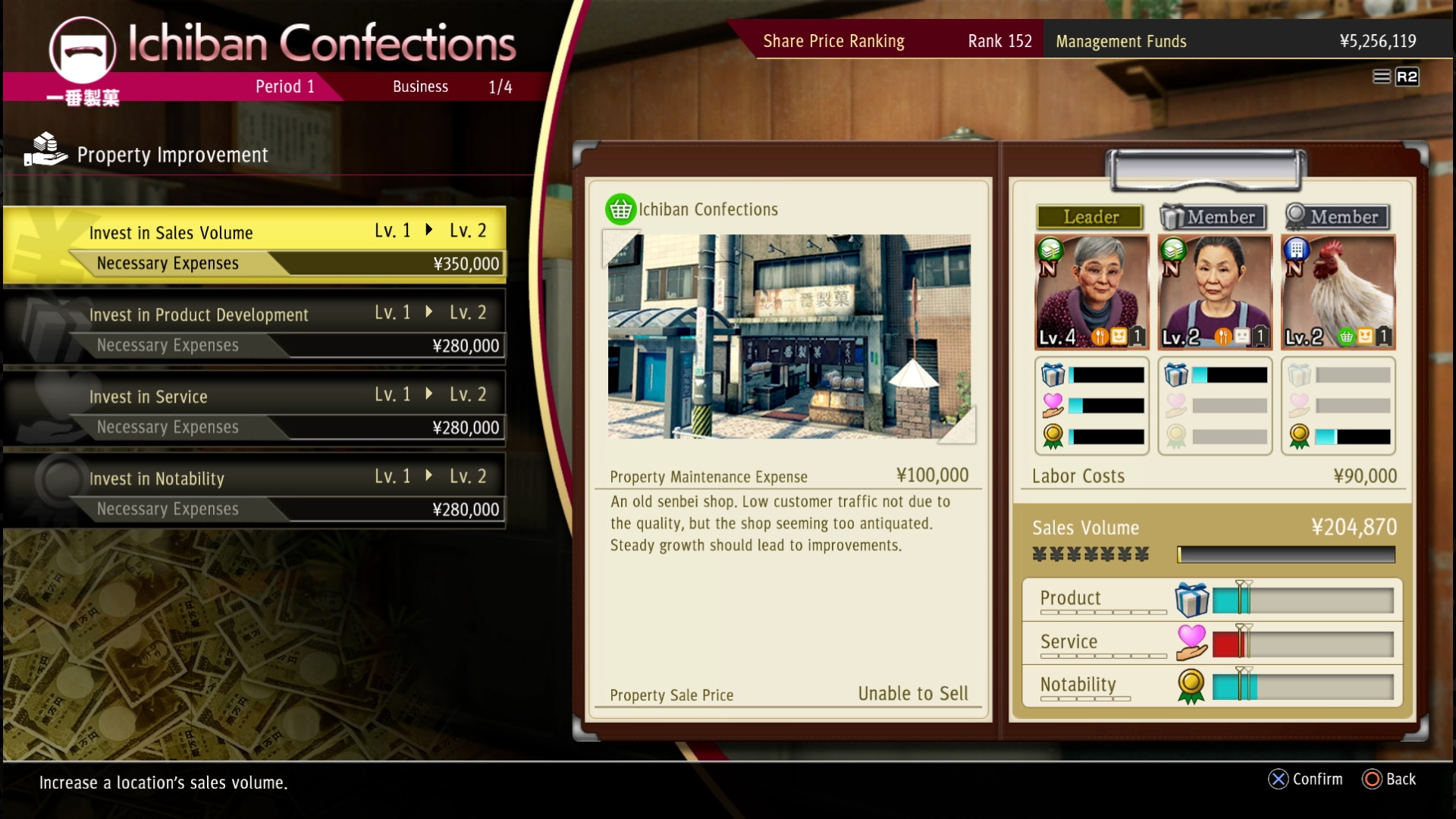 If you invest in the others, it’ll increase the property’s base product, service, or notability. This means your employees won’t need to help them out as much with their own stats, and it’ll be easier for you to get past those vertical lines and into the blue.

So now you’ve assigned your employees to your properties and made sure they’re happy, head back to the main menu and you’ll notice that the Open for Business “Projected Results” should be nicely in the green. This is the amount of profit you’ll expect to net when you go ahead and let the sales commence.
Opening for business is an automated process. Let’s take a look at the image below: 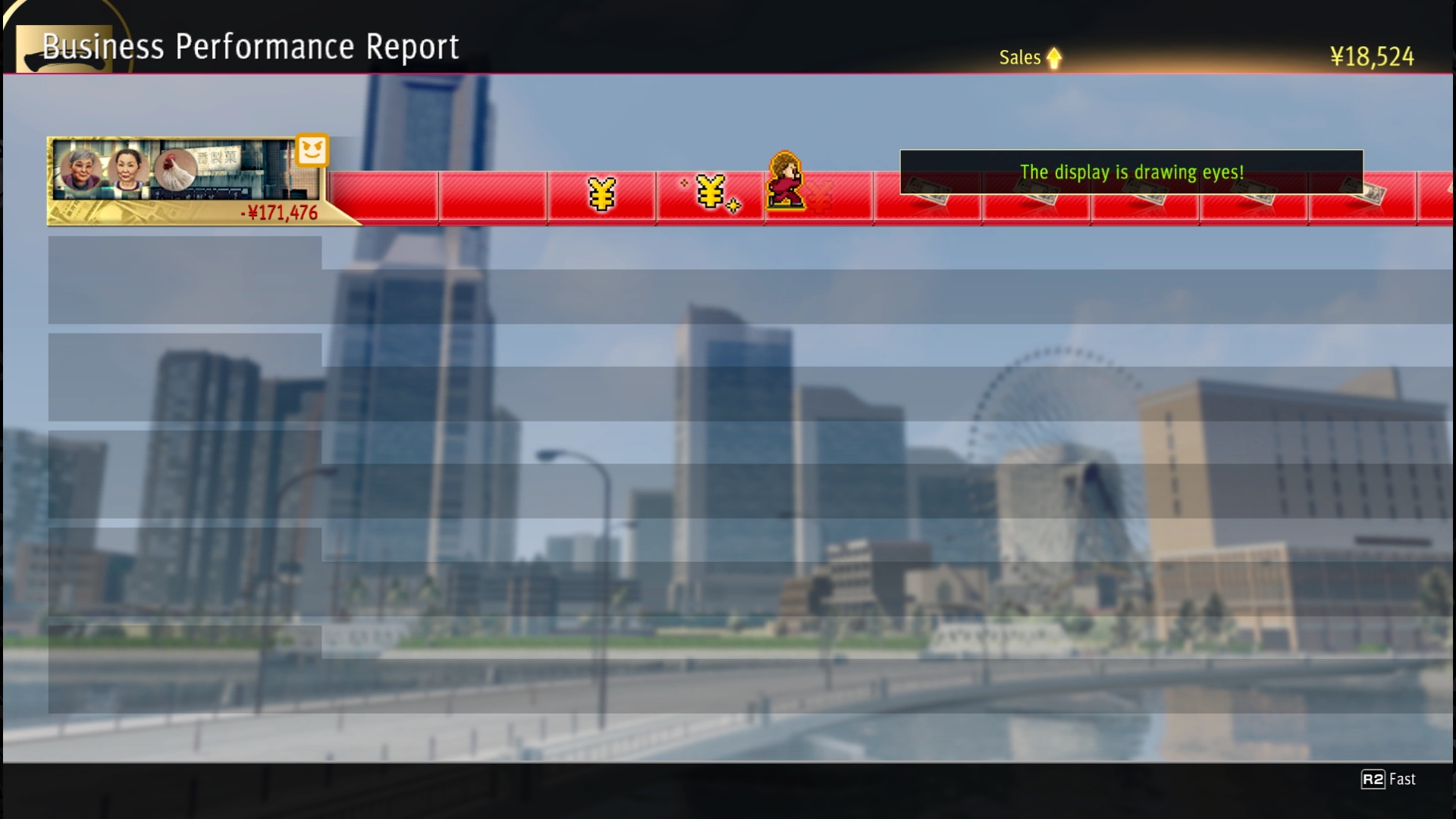 First up, each row represents one of your properties and the staff you’ve assigned. You can see how motivated your staff are by looking at the face icon to the right of their portraits.

As time goes by mini-Ichiban will run across the screen collecting cash. You’ll always start in the red as you’ll need to pay off your wages, overheads, and the like. As time goes by, you’ll eventually hit green and start turning a profit.

When Ichiban comes to a halt, the sales period is over and you’ll shut up shop. You can see your total sales at the top right of the screen and a second screen will break down all the numbers for you. Unless you love all the maths, just pay attention to the “Overall Profit”. 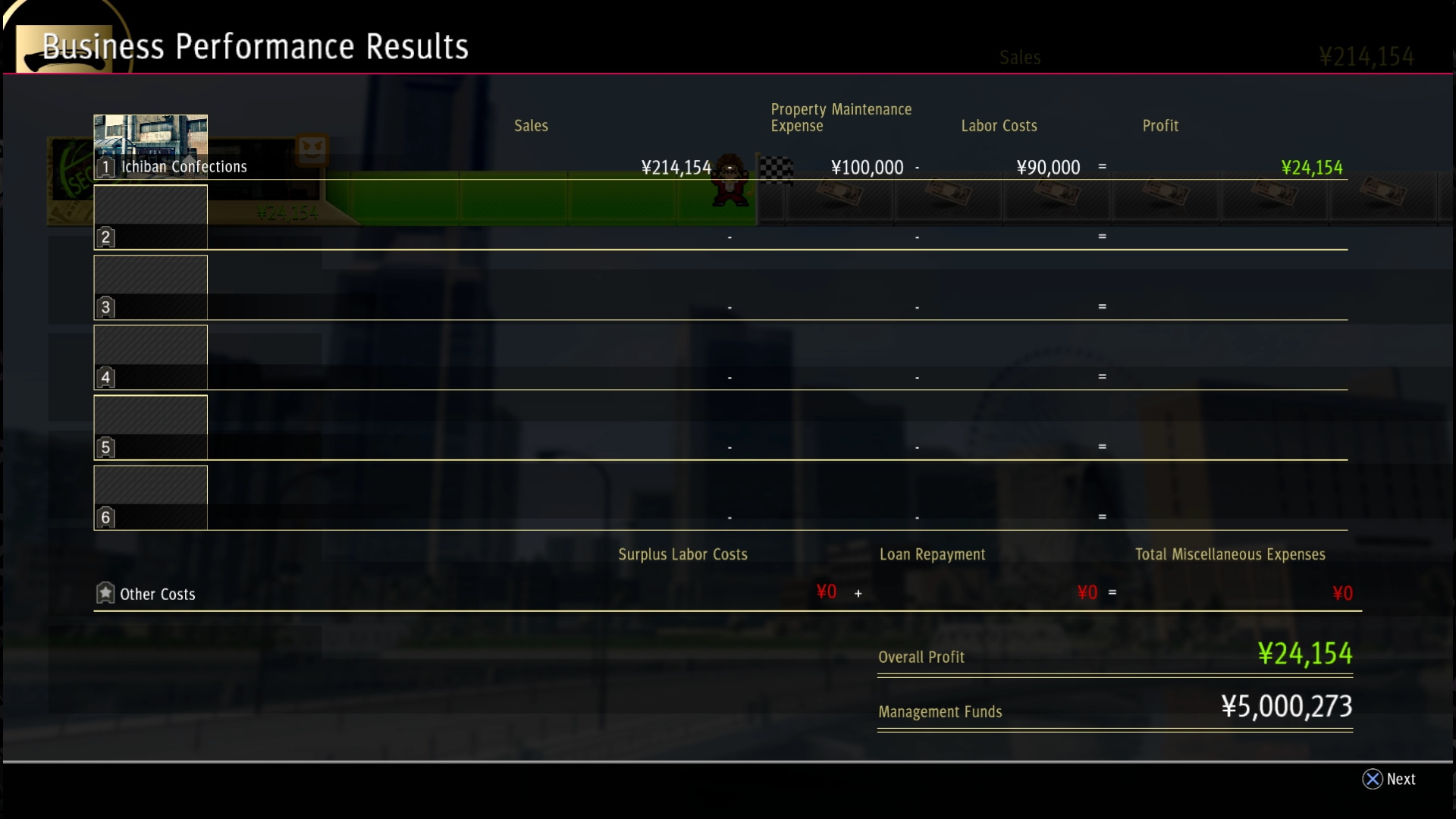 After you’ve opened for business your employees will gain XP and your profit will go straight into your management funds. Lovely stuff.

Just remember to keep an eye on your employee motivation gauges as they will have taken a hit.

Possibly the most confusing, most stressful element of it all. I’m going to break it down bit by bit, so hopefully by the end of this section it’ll seem a little less intimidating.

First off, as always, make sure your employees are motivated.

Next, select the “Board Room” option from the menu screen. This is where you’ll assign employees to go into the Shareholding Meeting with you, and it’s also where you can view which board members you’ll be going up against. 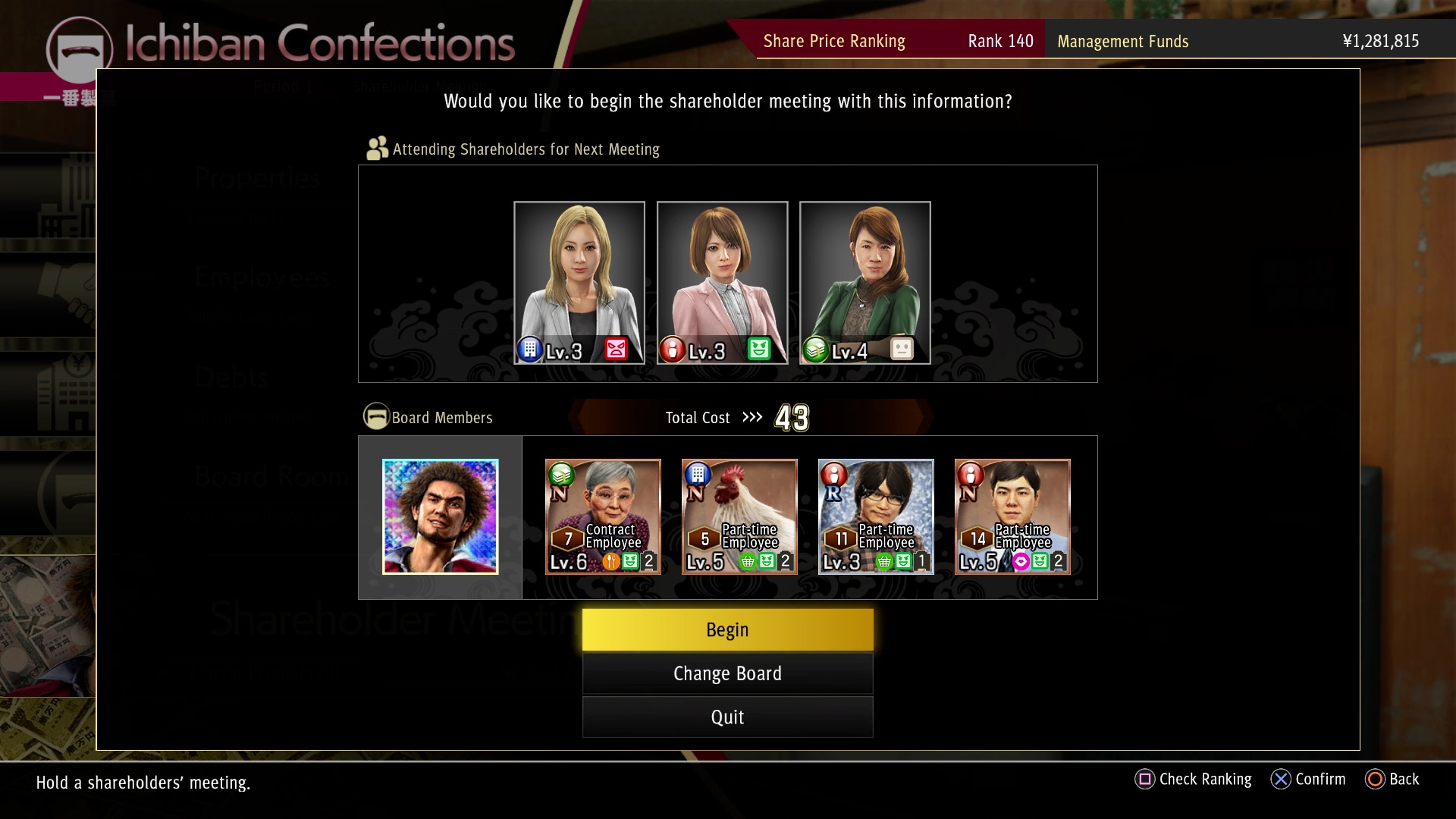 When choosing who to take in with you, note the colours at the top left of their portraits first. You want to bring in colours which’ll perform well against the Shareholders.

Now, take into account the hexagons with the numbers in them. This indicates how much it costs to use them in battle. The lower the number, the better.

Your aim in these battles is to break the shareholders’ guard by answering questions. If you break their guard, you’ll have a chance to deal damage. Deal enough damage and they’ll be charmed by you and sit down, eliminating them from the fight. Charm them all and you win.

Right, let’s take a look at the screen below. 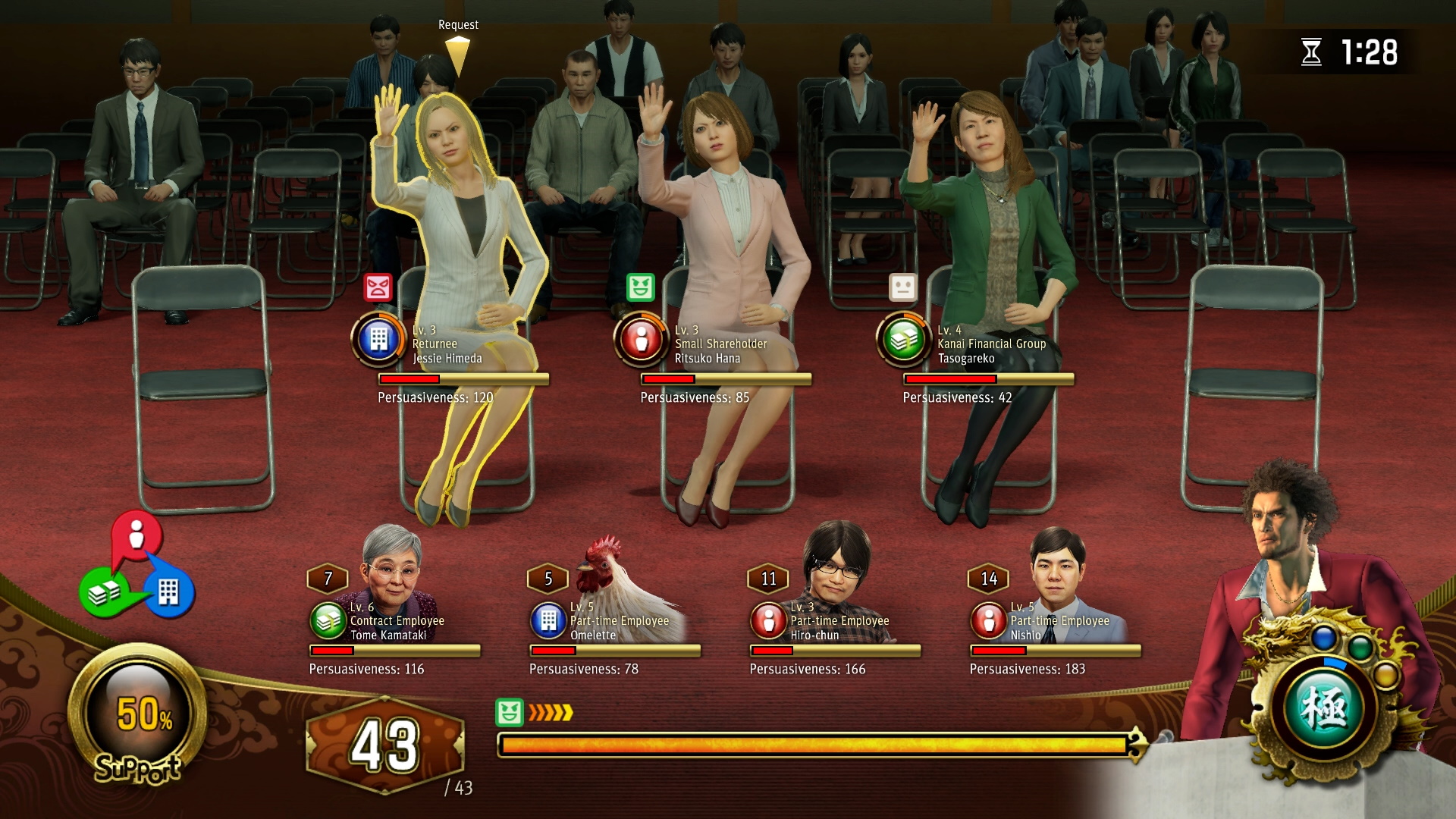 You’ve got the three Shareholders out front and your roster down below.

Pay attention to the rising bars next the shareholders’ colours, as well as the little face emojis. Let these bars rise to the top and you’ll take “Support” damage.

Note the point total next to the orange bar. This fills up over time and will deplete every time you attack with an employee.

You want to target the most irritated shareholders first, in this case it’s the one on the far left.

Here we’ve hit this shareholder with a rebuttal. She’s red, and we used our 11 point red employee against her. This broke her guard by two out of three, indicated by the shield icons. 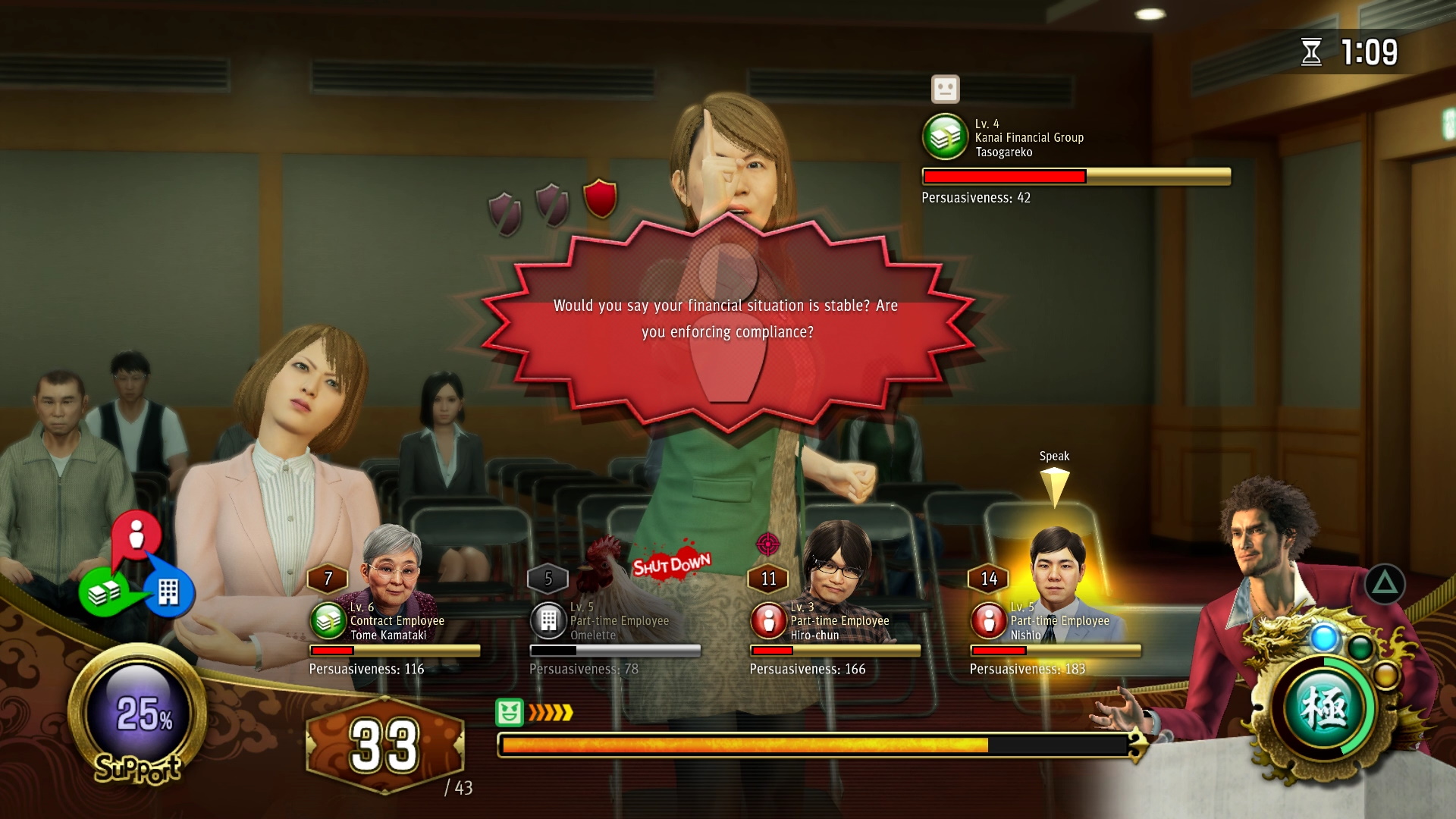 Next, we hit her with our other red employee breaking her guard entirely. Now she’s vulnerable. At this point you want to attack with employee colours who will do well against her. Blue or red, ideally, but Green if you’ve got no other option.

Just bear in mind your point total which’ll fill up over time. Employees cost points to use in battle, so do your utmost to maximise each usage as you'll have limited time.

At the bottom right of the screen you’ll see Ichiban’s apology meter which can fill up three times, represented by the little circles. These are effectively big AoE attacks which’ll deal increasing amounts of damage to all shareholders.

Tier one apology deals damage to all shareholders. Tier two does more damage, recovers your employees a bit, and stuns shareholders briefly which’ll stop them from asking questions for a bit. Tier three is similar to two, but with greater everything.

After a Shareholder Meeting you’ll climb the shareholder rankings if it was a success, earn some profits for your business, as well as some personal profits too.

When you return to the main menu, sometimes Eri will highlight employees who’ve taken note of your successes and want to get hired. Occasionally there will be other business proposals, or even bonuses to training courses for certain periods of time too. 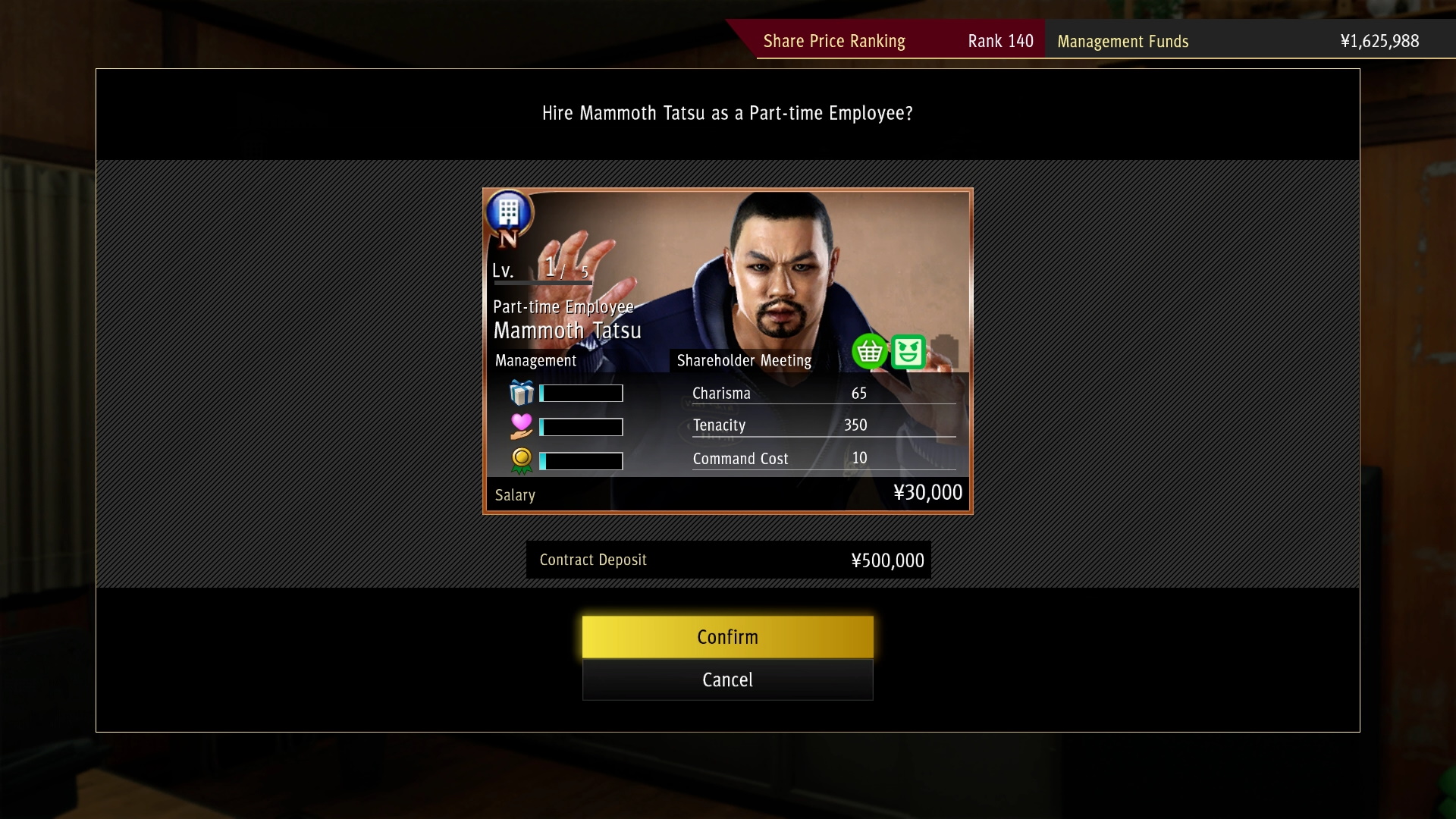 Be sure to take advantage of these when they swing around, but don’t be afraid to refuse them too. Be smart with your money.

That’s all for this page, but if you want to make even more yen, make sure you have a look at our how to make money fast page. Our Kappa Statue locations and Missing Cat locations guides will also help you net even more cash too, so don't pass those up.