Freelancer Yarrow will ask you to aid a fellow Freelancer named Rythe with escorting some Arcanists. Missions with Arcanists don't tend to go well since they're rather interfering busybodies, so lo and behold, they've angered some Scar. Your job is to protect the Arcanists as best as you can, while at the same time driving off the Scar attack.

Anthem What Freelancers Do guide 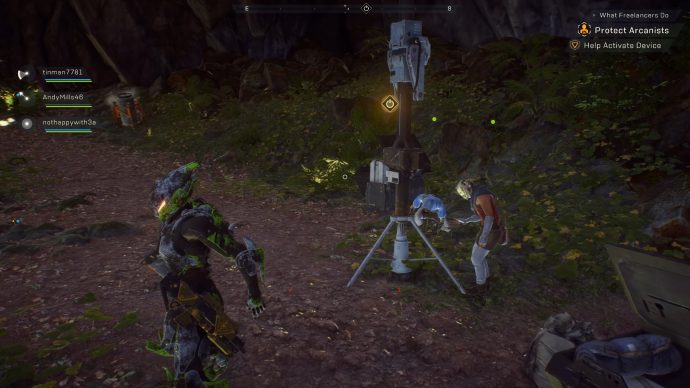 Meet up with the Arcanists at the waypoint indicated to the west. As soon as you talk to them, they will be attacked by Wolven. Stick close to the Arcanists to boost the signal, while gunning down the charging pups. More will appear during the scan, so keep killing them until it's full. Once done, you'll get a notification to head to the next group of Arcanists.

You'll arrive at the camp to find that they are not there. Pay attention to the radar in the top of the HUD as this is an indicator of how close you are to your target. The more bars are filled, the closer you are. There's also a little arrow in the middle that indicates whether or not you're at the correct elevation. 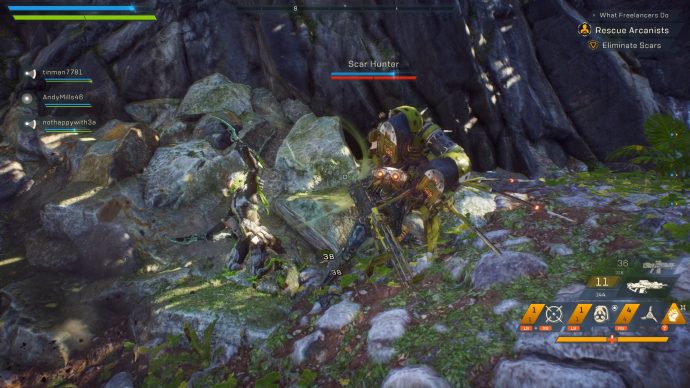 It turns out that some Scars may have captured the Arcanists. Their numbers include "Scar Hunters", who come equipped with jetpacks and shields. They're a lot tougher than the Scar you've faced in the past and should be your priority targets, so use a combination of abilities that are most effective against their shields - our Anthem Combos guide has more on that. Defeat them all and investigate the cage. 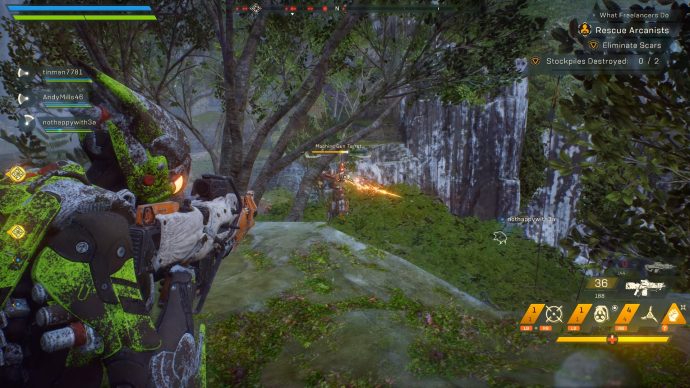 The Arcanists have left some things behind, but they're no longer there. Head to the waypoint indicated to find another Scar base. This one has some turrets which are armoured. You can tell this because of the fact their health bar is yellow - meaning that you should use fire and acid attacks to break them down. A few good sniper rifle shots also makes short work of them.

You'll need to destroy the stockpiles, so take out the turrets and any Scar in the area before going for the stockpiles. Eventually a Scar Hunter named "Junkmaw" will appear with reinforcements, so defeat them all and free the Arcanists in the central prison. 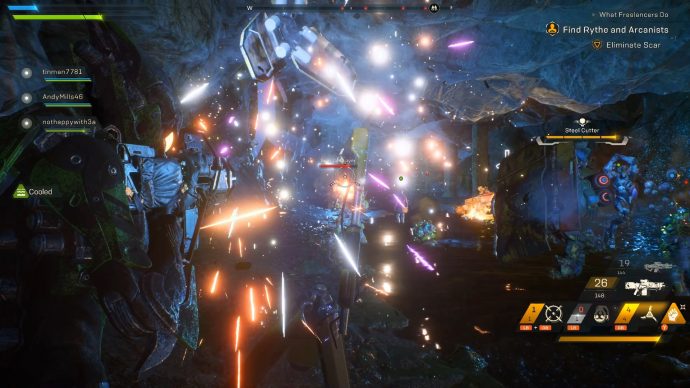 With that job done, head back to Freelancer Rythe's work-site to find it overrun with Scar forces. Destroy them all, including the Hunters and Enforcers, so you can investigate the site. Since there's no sign, you'll have to manually look for them - using the compass radar at the top of the screen. There's a nearby cave to the west of their camp where they're hiding, so go over there.

You'll arrive in the nick of time as the Arcanists and Freelancer Rythe are being attacked by some Scar, led by a Scar Enforcer named "Steel Cutter". These Scars are nothing you've not seen before, but Steel Cutter is counted as a legendary unit - meaning that it will take a long time for you to kill him. Help Rythe kill the rest of the Scars to finish the mission.

Once you've finished all three of them, the mission will be complete. Just a reminder that you can always head back to the Anthem Missions hub to find the mission you are looking for or head back to the previous main story mission: Anthem Incursion. There are two other missions to sink your teeth into before heading back to the main objectives. To assist the Arcanists, look to the See in the Dark Agent Quest guide, or to aid the Sentinels instead, go to the Anthem Preventative Precautions Agent Quest guide.