If you click on a link and make a purchase we may receive a small commission. Read our editorial policy.
Assassin's Creed Valhalla review
Not an easy entry point if you're new to the series, but Valhalla is a lively grab bag of all the best bits from Assassin's Creed games past. Even if that does get a bit much at times.

Assassin's Creed Valhalla starts in Norway, spends most of its time in 9th century England, and even has some optional detours to the present day or mythical Asgard if you fancy it. But the latest entry in Ubisoft's used-to-be-annual franchise about stabbing your way through history just kept making me think of Texas, for two reasons. The first, and most obvious, is Texas as in "everything's bigger in". Valhalla just feels like it has more of everything.

The map is huge, with each area having its own mini-saga of warring locals and power struggles to complete to get them on side. There's a whole menu of evil Templar agents to hunt down, a la Assassin's Creed Origins and Odyssey. There are themed gear sets to collect and upgrade. There are side missions a-plenty, ranging from stealing clothes from nudists, to tripping on mushrooms, to collecting Roman artefacts. And stealthy assassinations are back, too. Valhalla is daunting and messy, but it's also a pick 'n' mix of all the best bits from the series. With cool Viking haircuts thrown in.

The plot, such as it is and such as you'll need or want to pay attention to it, follows Eivor the Viking and his/her (you can switch gender whenever you like) adoptive brother Sigurd leave the overcrowded, wintery shores of their homeland and pitch up in Mercia - basically the midlands - looking to make their mark and carve out a new home. Tensions rise as Eivor does, er, basically all the work at both, while Sigurd becomes ever more convinced that he is an all powerful, fated ruler. You can throw in Eivor having some dreamquest visions of Asgard if you're feeling saucy.

The England of Assassin's Creed is summer cusping into autumn, so you get to gallop across grasslands full of flowers, but also get mud and rain and orange leaves. And it's also very transient. Towns and settlements change hands a lot, hamlets burn down and are built again. That's the other reason it made me think of Texas. The one and only time I have been to Texas I was in San Antonio. I walked past a tour learning about the history of the downtown area of the city, and overheard "... this hotel was built in 1979...", which made me laugh. And Valhalla does feel similarly unmoored from history, or at least unmoored from a comfortable, recognisable one. 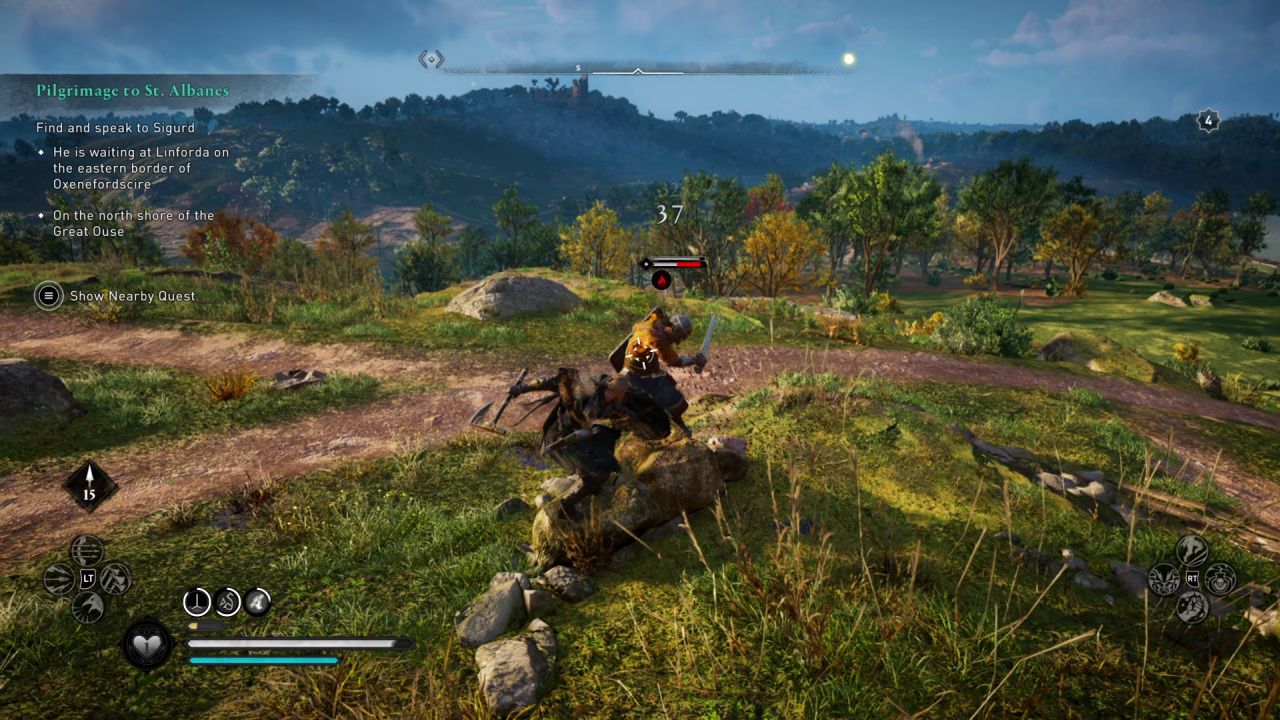 Most other AssCreed games have had something a modern player can lodestar to a bit. Ah yes, the coliseum. Or the pyramids. Or Notre Dame. Valhalla is set in England but, in fact, it isn't, because England didn't exist yet. Cities like Norwich and Oxford and Leicester are there, but not as we know them. The most permanent landmarks are leftovers from Ancient Rome, and ones that no longer exist in the same form today. It's all in flux, and it's a curiously unrecognisable setting to me in comparison to, say, Watch Dogs Legion. And on this lump of wet clay stamps Eivor, in their big size nines.

They're a very charismatic protagonist, whether you choose male or female Eivor. They're pragmatic, if tending towards violence, uncomplicated and extremely confident. But they also have a few poetic words of wisdom ready for any situation, be that crowning the new king of a region or rescuing a tame wolf at the behest of some lying children.

The adventures and comedic japes they get into are very varied, and I remain delighted that this time Ubi have handed me a lot more trust than in previous games. Quest markers are comparatively few. One early mission involved rooting out a traitor by figuring out which boat belonged to whom, and where it had ended up - and I got nary a marker to tell me where the clues where. I had to, if you can imagine, listen to and remember what people said and follow up on it. I felt like Columbo with a big blonde plait. Marple with an axe. 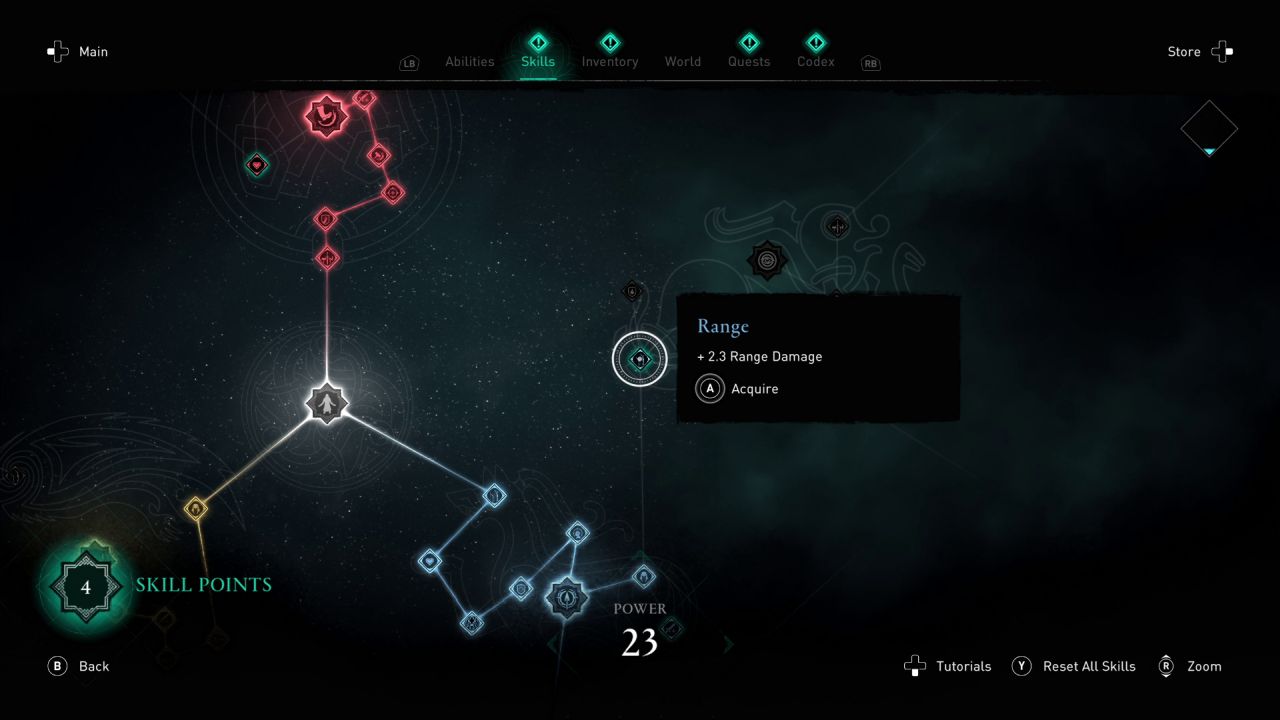 Eivor is also fucking massive, much like my beloved Kassandra, as are most of the Norse in the area. This is especially compared with the teeny Saxons. It's a wonder they ever pick fights with the Vikings, although I understand that they probably have mixed feelings about me, a giant warrior who burns down their churches for no real reason other than to steal everything in the area.

You quickly enter what we may call the "core loop" of Valhalla: at your new settlement Ravenholme you pick a region to forge an alliance with. Ride over, meet with the locals, and usually depose whoever is currently in charge and replace them with your own man - a Saxon willing to work with the Vikings, perhaps, or a Dane whose been hanging around the area a while. The culmination of this is usually an attack on a big fort.

Running towards an abbey yelling "KILL CHRIST! AND BURN HIS HOUSE DOWN!", is the energy a lot of people want right now.

Raids are, like a girls hockey team playing an away game and absolutely smashing it, jolly good fun. You and your mates run around yelling, bashing people with heavy sticks and trying to take as much ground as possible. Combat is fast and often confusing, with blocking and parrying returning and given more importance than ever. You have the option to mix and match your main and off hand with whatever weapons you like. I favoured the shield and axe combo that you start with, but there are flails, hammers, big swords. You can even double shield it if you want.

This does mean that melee combat is unavoidable at times. You can tilt Eivor towards melee, ranged or stealth, but really you're going to need to put a chunk into melee. There are levels where you're called upon to save or assassinate a target, and it feels like an early AC game as you sneak around with your hood up, being all casual as you find a way in to a storehouse or a church. But if you don't pour some levelling effort into melee, you're going to have a harder time.

You level your Eivor with skills and abilities. The former are passive, unlocked on a big star map not entirely unlike a Final Fantasy Sphere grid. Mostly these give you things like buffs to different damage types, but you can also unlock things like a mighty stomp that smashes a stunned enemy. Abilities are active. Big moves you can dust off in a fight, like throwing loads of axes all over the place, covering your weapon with grim poison, or weaponising your raven pal to attack (that being the thematically appropriate replacement for an eagle this time). 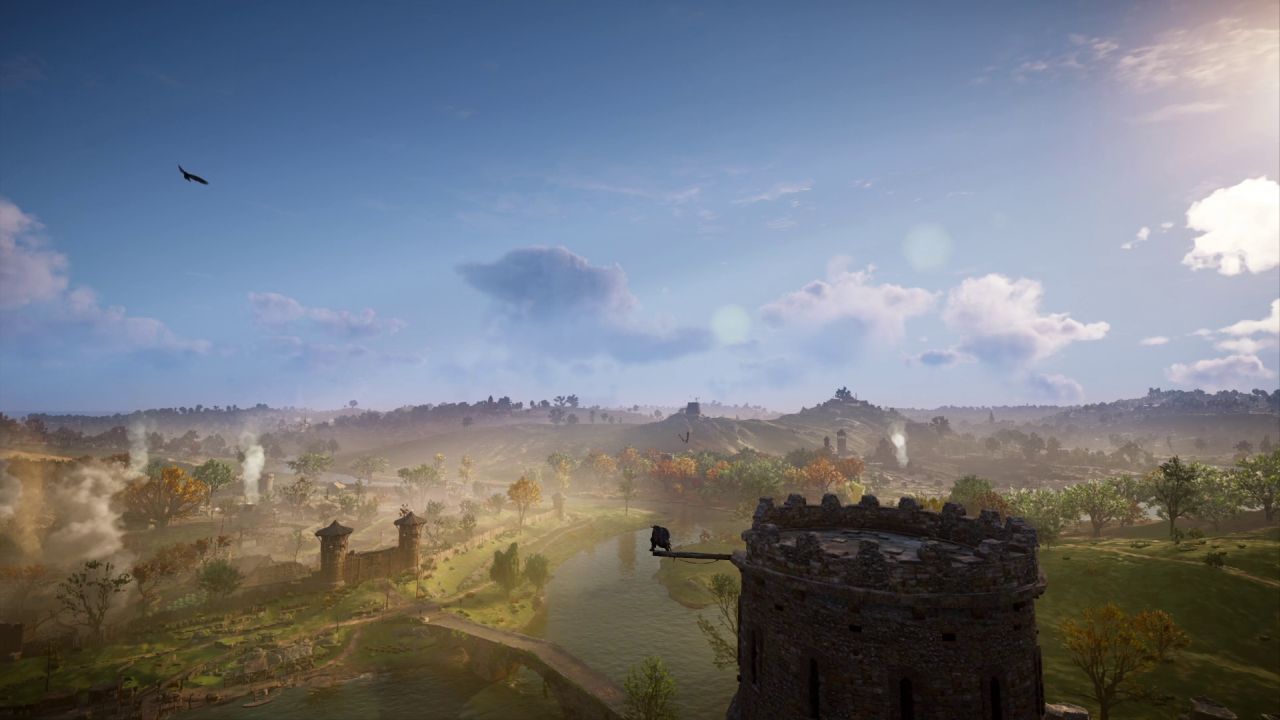 Abilities are unlocked by finding and looting special books that impart the secret knowledge of e.g. firing like a bajillion arrows from your bow all at once. These are hidden off the beaten track around the map, or in monasteries and settlements you can raid. And here everything loops back around on itself like an ouroboros with tattoos and a longboat. Or possibly, an ouroboros but specifically the snake that eats the world from Viking myth.

There are many, many parts to Valhalla, but they manage to all link into one another in a way that just about works, but is difficult to explain if you're not actually playing it right now, as we speak. Like riding a bike where even the frame and the handlebars are in motion. Don't stop, or think about it all at once.

You level up by exploring and fighting, yeah? But unlocking skills is what increases Eivor's power level, and different regions are soft gated by that. So, too, are monasteries and abbeys to raid, which is where you get the raw materials you need to upgrade your settlement and gear, the latter of which makes you better at fighting and the former unlocks extra side quests like killing templars or hunting legendary animals like Black Shuck. And there are only so many monasteries per region... 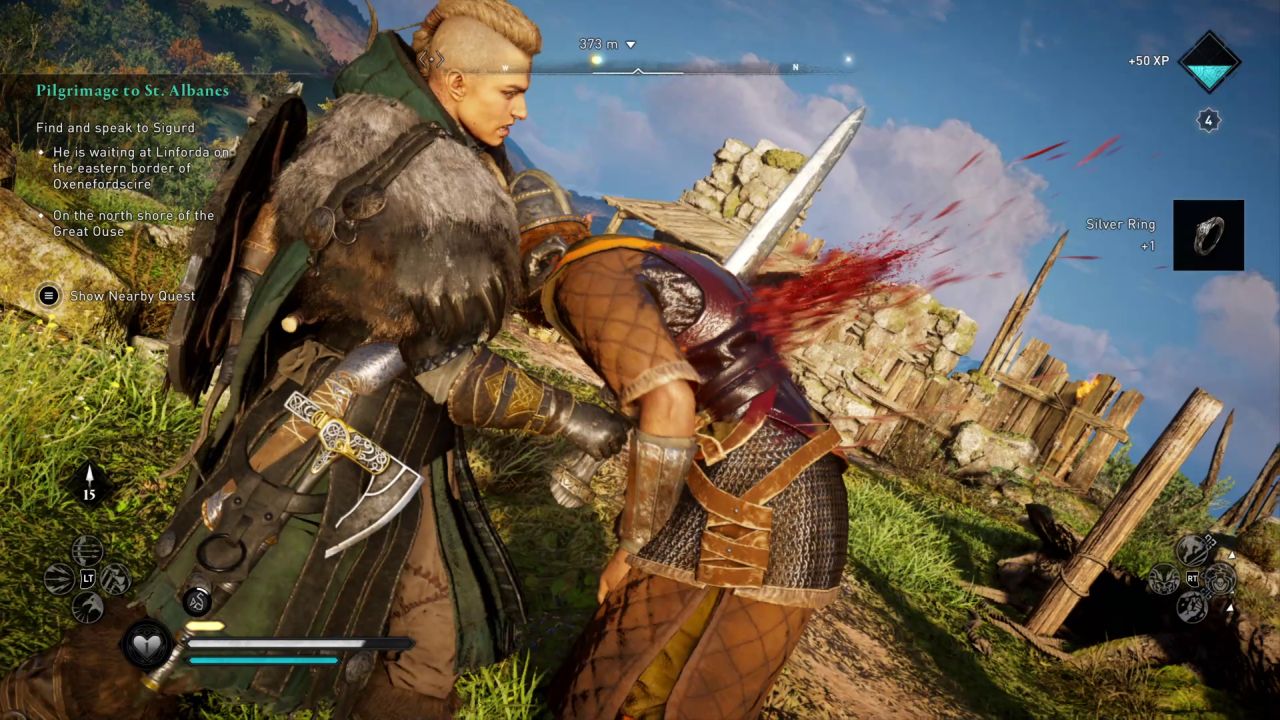 This does result in some janky bits. There are the usual NPC bugs you expect from any game of this size, and I sometimes saw grass floating above the bridge it was supposed to be on. But there are also just bits where things don't quite make sense. I had a conversation with a guy who said he'd never heard of Norway, and then ten seconds later told me that Norway was twice the size of Mercia. One side quest I came across was an old Viking raider living in self-imposed exile on an islet. He asked me to stop by his old house if I was ever in a certain town. That certain town was about 500 yards away.

But this game is huge, with so many moving parts that some are bound to collide into one another, and there are other details that work and are fun to notice, like a kind but impractical noble slipping as he climbs into a boat, or the fact that you can buy horses named after the deadly sins and they have livery to match the theme. Valhalla is so complex that it's a poor entry point if you've never played an AC game before, and it's not killer content all the way down. You're as likely to run into a fetch quest where you have to kill shitloads of hares as you are a little vignette about two families arguing over crops.

But you know what? For fans of the series it's really entertaining. It might not set the world on fire, but you can set some virtual bits on fire yourself if you want. I think running towards an abbey with terrible purpose, yelling "KILL CHRIST! AND BURN HIS HOUSE DOWN!", is the energy a lot of people want right now. I dunno how well that would play in Texas, though.