In this TIE Fighter loadout guide:

The base TIE Fighter is quite honestly a bit underwhelming compared with the Interceptor and the TIE Bomber, which is why not many players are seen piloting the Fighter: they haven't bothered to experiment with the ship and its components. Well, I have - and it turns out the secret to the TIE Fighter is to make it act like an Interceptor. I'll explain more below, but first let's take a look at the loadout itself.

Curiously, in this loadout the weapon is the least important part. You could feasibly use any weapon with this build, but I always lean towards the base L-s1 Laser Cannon because all the other weapons have some pretty big flaws. Plasburst is hard to use, particularly against regenerating shields; rapid-fire runs out too quickly; burst isn't as controllable as the standard laser; and the guided laser deals pitiable amounts of damage.

The true key to this loadout is its extreme manoeuvrability, thanks to the Sienar Agile Hull and the Twin Microthrust Engine. Together they trade a bit of health, speed, and acceleration for a stupendous amount of manoeuvrability, which allows you to track even the nippiest of Interceptors through space. I consider speed and acceleration to be overrated in Squadrons: you really don't need that much on either stat as long as you know how to boost and drift your way out of bad spots.

The Countermeasures are easy to guess if you've read my other loadout guides: the Sienar XX-5 Seeker Warheads are by far the best countermeasures around, because they are so reliable. You get multiple charges, you can use them from any direction, and they have a surprisingly good range for homing towards and taking down incoming missiles. You really shouldn't be using anything else.

As for the auxiliaries, I've opted for two utility-focused abilities rather than aggressive ones, because the Laser Cannon gives me all the damage potential I need. The Repair System is a godsend for the TIE Fighter which will help get you out of dangerous encounters intact, while the Ion Missile is to strip away heavy shields on larger Republic ships.

Below I'll talk a bit about how this loadout is meant to be used, but if you want more details and stats then you should first check out this TIE Fighter build in full over on the Squadrons Toolkit Loadout Builder. 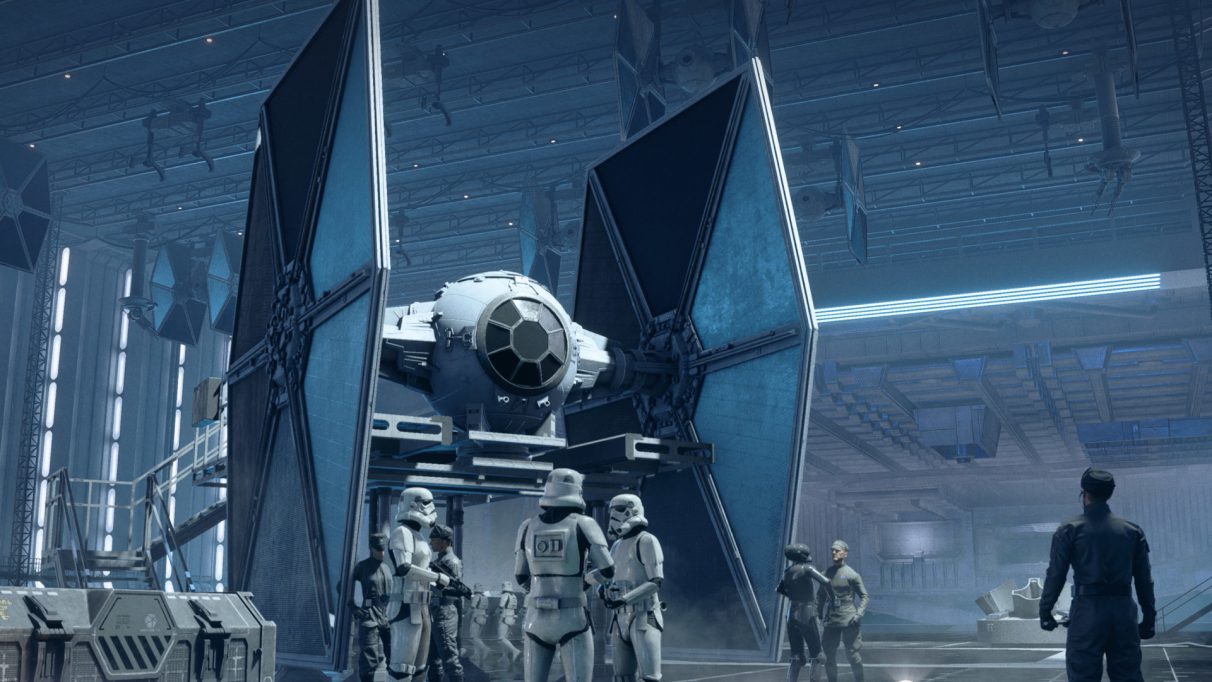 How to use our TIE Fighter loadout

This is not a TIE Fighter that should be used for assaults against Capital Ships in Fleet Battles. It's better used chasing down the enemy squadron, particularly the A-wings. You don't want to find yourself in a head-to-head, if possible. You should try to get yourself into a situation where you can use your high mobility to tip the scales in your favour. Look for third party opportunities, or opportunities to tail a larger ship.

Start with an Ion Missile. If you're close enough when you deploy any kind of missile, the enemy won't have the reaction speed to deploy countermeasures in time. Once they're disabled, it's a simple case of pounding their hull with your blasters until they crack like a metallic space-egg.

Use your Repair whenever you need it - despite having a considerably higher health pool than any Interceptor, you're still not exactly a bullet sponge. This TIE Fighter needs to be piloted by a shrewd player who knows when to turn and run before they take enormous hull damage, not after. But by repeatedly finding advantageous positions and exploiting your mobility to continue pummelling the enemy without ever letting up, you'll easily find yourself at the top of the scoreboard with this build.

That wraps up our TIE Fighter loadout, but we've got plenty more to talk about when it comes to Star Wars Squadrons. Why not have a gander at our Star Wars: Squadrons tips page for tonnes of practical and useful ideas? Or, if you're after a top-tier loadout for a different ship type, check out our in-depth Best Star Wars: Squadrons loadouts page.