If you click on a link and make a purchase we may receive a small commission. Read our editorial policy.
Bugsnax review
Bugsnax is a faintly naughty, but never crass adventure that feels simultaneously like a love letter to, and a sharply observed satire of, the games that inspired it.

Animals are delicious. Trotting all around the place on their powerful, edible legs, tumbling head over hooves into industrial mincers and having their bodies, minds and souls mechanically reformed into millions upon billions of tasty, pink breakfast tubes. This magical sense of gastronomic abundance — the unshakeable belief that every creature that scoots, slithers and sails on the wind is simply tracing an inevitable path to our waiting stomachs — is captured in Bugsnax: a cute-as-buttons puzzle adventure game populated by bugs, who are also snacks.

In this weird adventure from the creators of Octodad: Dadliest Catch, you play a journalist dispatched to a mysterious island in search of the legendary cryptozoologist Elizabert Megafig, only to discover that her expedition has gone off the rails. The fuzzy explorer is missing, presumed adorable, and the frontier village she established has been abandoned to ruin. The colourful cast of friendly muppets who joined Elizabert on her mission have each fallen into their own personal brand of despondency, scattering themselves across the map and refusing to return to town until someone, anyone, performs a series of snack-related tasks for them.

Your job is to secure a series of interviews with the residents of Snaktooth by first satisfying their bottomless lust for bugsnax, an endemic species of bug-snack-hybrids that includes Bungos (hamburgers with curly fries for legs), Crapples (crabs made of apple slices) and Rootles (just a little carrot dude who wriggles around like a worm, why not). To find and capture them, you’re armed with a Pokémon Snap style camera and a growing set of tools and traps.

The simpler bugsnax can be ensnared simply by leaving a trap in their path and triggering it while hiding behind a bush, but those with a stronger sense of self preservation must first be lured out into the open or stunned. The shy Fryder (a spider made of french fries), can only be coaxed down from the ceiling with a well-placed splodge of ketchup. Strabby (an upturned strawberry who uses its leaves as tiny feet) will take shelter inside any nearby bush when frightened, but can be exposed again by dousing its hiding place in ketchup, causing any passing Bungos to charge at it. 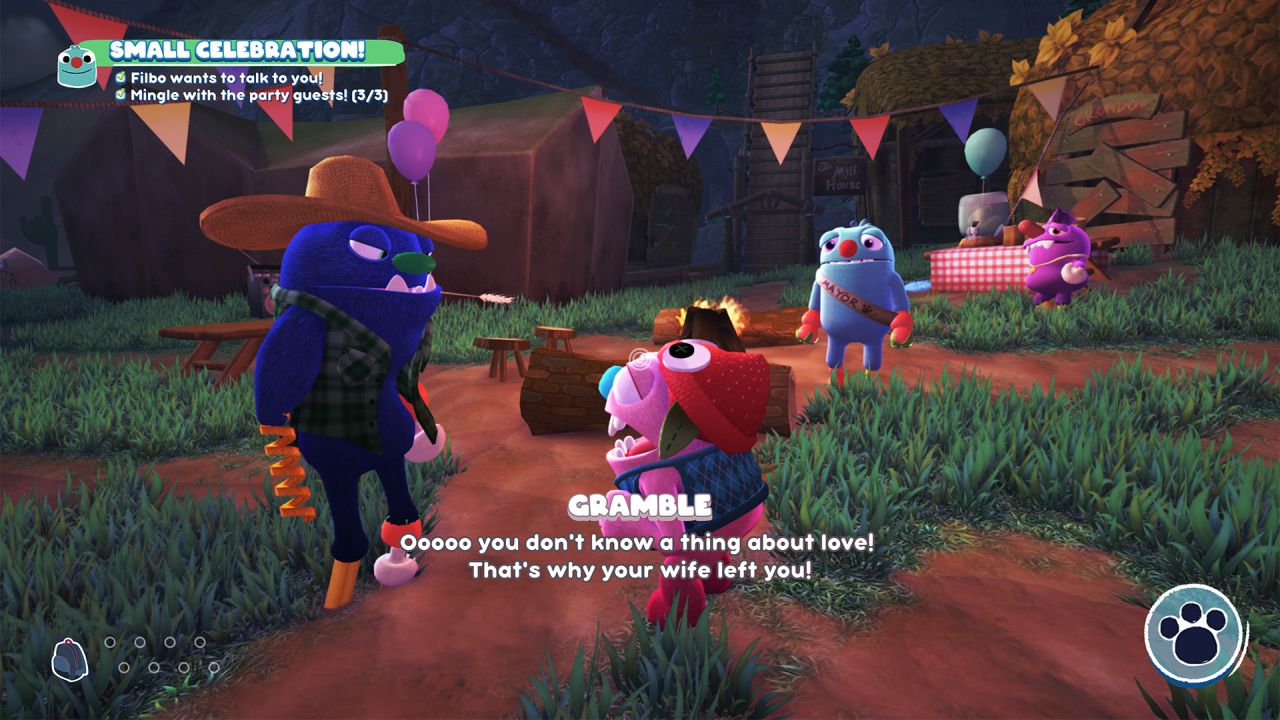 Like Pokemon’s elemental types, different species of bugsnax have different preferred sauces. Some become enraged by hot sauce, others entranced by ranch dressing. Lay down a breadcrumb trail of sauce splodges and you can lead a bugsnax, Pied Piper like, towards traps or into danger. Later on, tools like the tripwire, the grappling hook and the spring-loaded catapult add a few more verbs to the game’s vocabulary, combining with the environment, the time of day, the weather, and other bugsnax to turn each encounter into its own self-contained puzzle.

But despite the promise of an interdependent matrix of elemental sauces, capturing bugsnax is not as varied or systemic as it first seems. Ape Escape — 1999’s monkey-catching PS1 classic — turns out to be the best point of comparison here. Each bugsnax robotically follows a prescribed route when undisturbed, which can be revealed and highlighted using the camera, giving the handful of biomes the feel of a carefully constructed theme park ride, rather than anything as unpredictable as an organic and emergent ecosystem of flying sandwiches preying on sentient burritos. 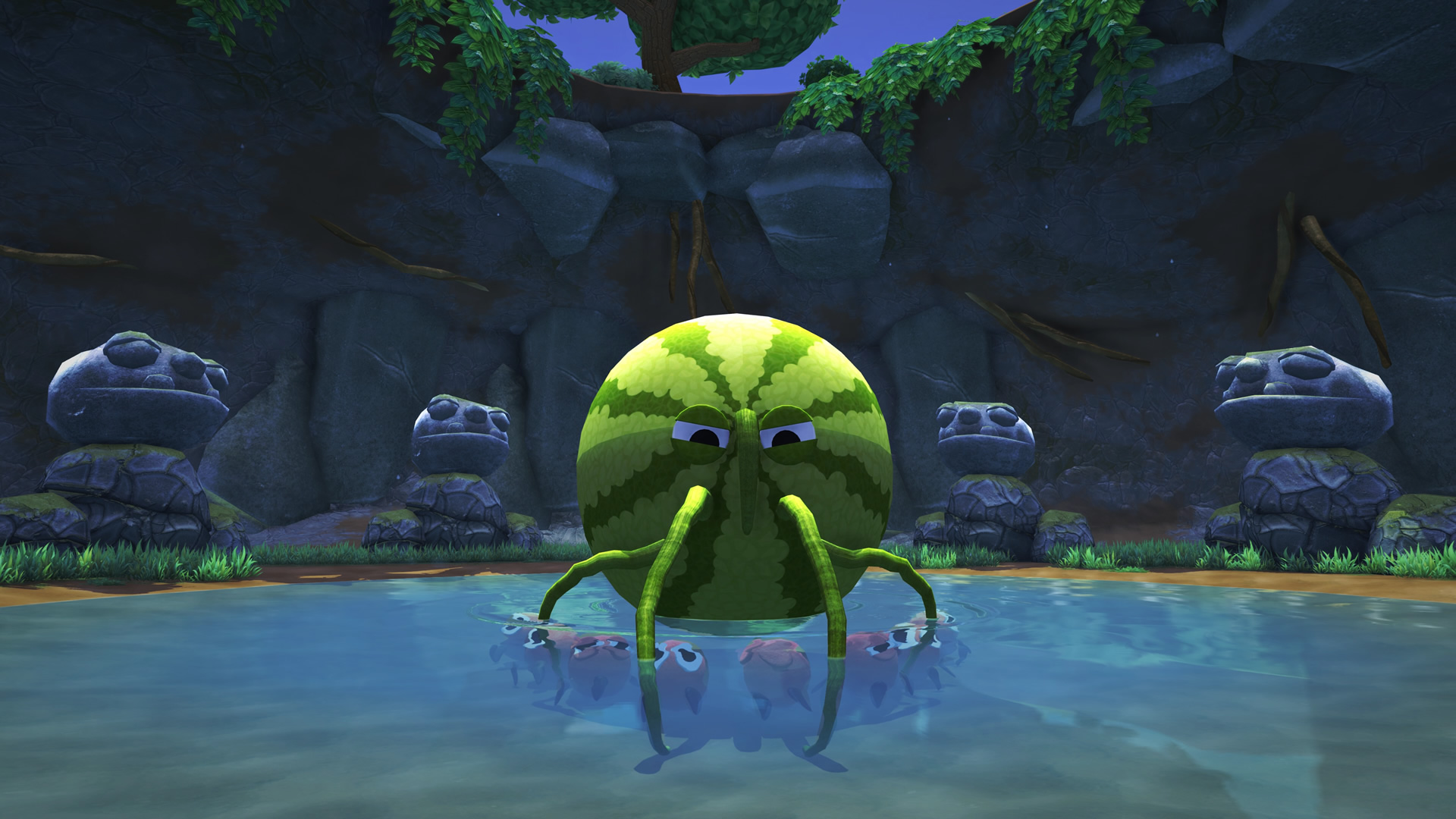 Placing all of the bugsnax on invisible rails has at least allowed the designers to craft more deliberate puzzles to solve. Everything you need to capture a tricky bugsnax will tend to be hanging around nearby, trees will invariably be aligned in just the right way to accomodate a tripwire, and frozen Popsicles that can’t be trapped until you’ve thawed them out will never be far from a convenient hot spring or a chilli-spitting Scorpenyo.

If you believe that all animals were carefully placed on Earth by some benevolent deity for us humans to load into deep fat fryers, Bugsnax’s orchestrated reality will resonate with you. For everyone else, the action of catching bugsnax is a predictable and by-the-numbers process. Your quarry always appears precisely where it’s supposed to and never behaves in a surprising or dynamic way, leaving no room for experimentation. It’s like those hunting safaris for the megarich, where all the lions have been dosed with Xanax and the rhinos are pissed on Schnapps.

But what Bugsnax lacks in its simplistic hunting game, it makes up for simply by being an incredibly fun place to hang out. The game is consistently very funny, starring a diverse cast of well-written characters voiced by Broadway talent, and representing a refreshing cross-section of genders, sexualities and relationship types. As you convince each new Grumpus to return to the village of Snackburg, they begin to rebuild their ruined friendships one by one, exposing more of the island’s sinister history as they do. Some complex character arcs tackle themes of addiction, mental health and body dysmorphia, all with a degree of care and thoughtfulness you wouldn’t expect from a game whose stated premise is “what if a burger was alive”. 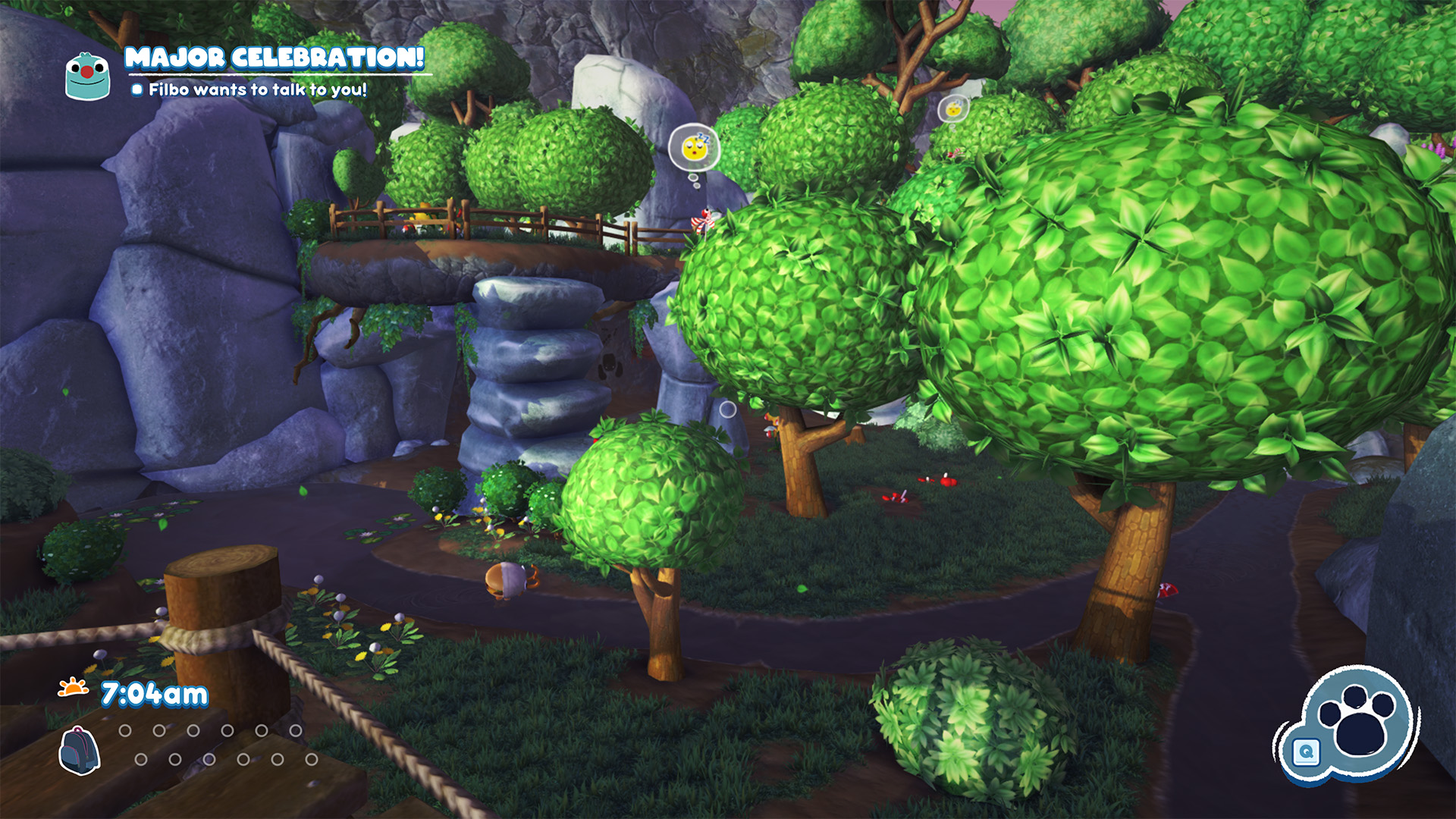 Bugsnax never quite manages to marry this aspect of the game with the part where you’re lurking near a bush, using launchpads to trap a bunch of grapes that’s also a mosquito. There are certain features that feel half-finished or not fully developed. You can feed your captured snacks to the Grumpuses to transmute their limbs and facial features into various bits of strawberries, pineapple slices and calamari, customising their appearance to suit whatever particular preferences you might have. But you’re prohibited from ever eating the bugsnax yourself, an inexplicable design choice for a game that’s this much about food, and one that leaves you feeling like a sad spectator to the whole ordeal, a street urchin pressed up against the window pane of a Victorian sweet shop.

For the five or six hours it takes to reach the game’s ending, Bugsnax is a delightful and intriguing world to inhabit, just one whose robotic wildlife won’t inspire you to jump back in and finish off your collection. Bugsnax is a faintly naughty, but never crass adventure that feels simultaneously like a love letter to, and a sharply observed satire of, the games that inspired it.