Forget Newell's billions, Plunkbat and whichever indie renaissance is currently happening: the real success story of Steam, over the years, is superficially dour and highly-specific vehicle simulations finding large audiences who have very little interest in steering torque or rim patterns. I have filled these pages with paeans to American Truck Simulator's soul-searching road odysseys, to the hypnotic satisfaction of stripping parts in Car Mechanic Simulator 2018, and even to the rhythmic, weirdly cyberpunk otherness of casting lines and gutting trout in Fishing: Barents Sea.

I'd had gentle hope that Bus Simulator 2018 might similarly be more than the sum of its dry, mass transit parts, but actually playing the thing reveals a game working overtime to be charming. This is a bus-driving game that is absolutely delighted to be a bus-driving game, and wants me to feel the same way. And y'know what? I think I do. And it's all thanks to Mira Tannhauser, the world's number one fan of being on a bus.

In the main, Bus Sim 18 is very much WYSIWYG, in that it is a simulation of driving a bus around a city, replete with taking fares, giving change, lowering wheelchair ramps and meeting timetable expectations. It even goes a little further than that - you can yell at passengers to move out the way of the doors or stop playing loud music, for instance. 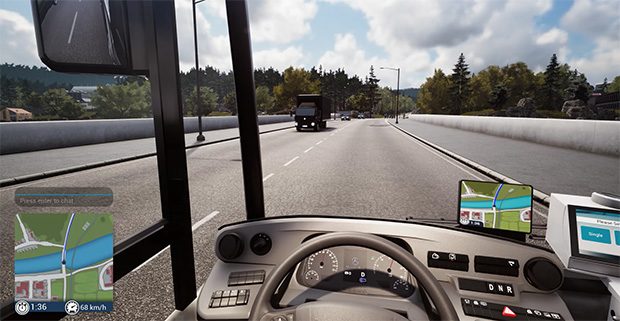 I don't know that a bus is as romantic as a truck - it's much more unwieldy, it's the very opposite of solitude and going off-course feels less transgressive and more that you're just rudely inconveniencing people. Even so, the different rhythms of this, the frequent stops and gently changing circumstances of working out how out much change to give or dealing with a fleeting inconvenience, are immediately pulling me in. It's very much a job rather than an escape, but it's a job pitched as an inherently good-natured, sociable and helpful experience, rather than the desert-dry tedium I fear it might be in meatspace.

Never is this more true than in the tutorial. You know what tutorials are like: either they're unskippably telling cybergrandmother how to suck murdereggs at length, or they follow the Step 1: move the camera > Step 2: punch > Step 3: remember these 312 different key combinations > GO formula. Bus Simulator 2018, I would argue, finds a new way of doing tutorials - which is to star Ms. Mira Tannhauser, overseer for the city's brand new bus system, and someone who is beyond delighted about it. 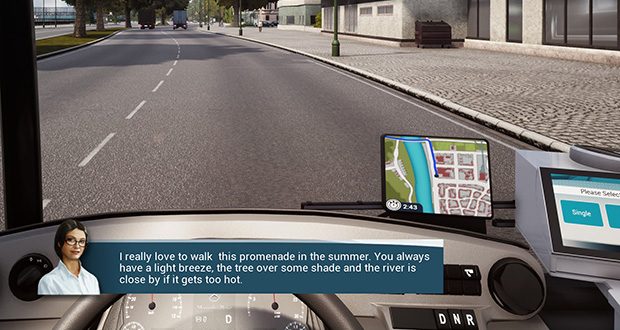 She's generally delighted about all things bus, really, including teaching you how to drive one and getting to ride on one herself. Mira joins you on your first, faltering journey, and in between cheery instructions such as "THERE'S OUR NEXT STOP!!!! Sorry, I'm just so excited" - she points out where she lives, where her favourite restaurants are and which parts of the city she likes to visit during summer. She even exclaims "HELLO-O EVERYBODY!" when new passengers come aboard. Honestly, we can all learn so much from Mira Tannhauser.

Mira also knows a lot of BUS FACTS, such as that the BlueTec Diesel Engine has an output of 210 Kilowatts, which she offers up in the kind of tone that would usually be associated with someone saying that you simply must give her your recipe for that incredible blueberry pie. Whatever they're paying Mira's voice actor for this, it isn't anything like enough.

At one point, Mira's sheer enthusiasm for teaching someone how to drive a bus reaches the point that she proudly introduces you to her fiance, a woman named Aubrey, who has for some reason come to watch a perfect stranger try to figure out how indicators work. Actually, it seems she's there to ask if the neighbours can borrow the lawnmower, which does seem like a rather unprofessional thing to do during someone's driving assessment, and perhaps that's why Aubrey and Mira ultimately decline to sit next to one another, despite initially exchanging loving pleasantries. 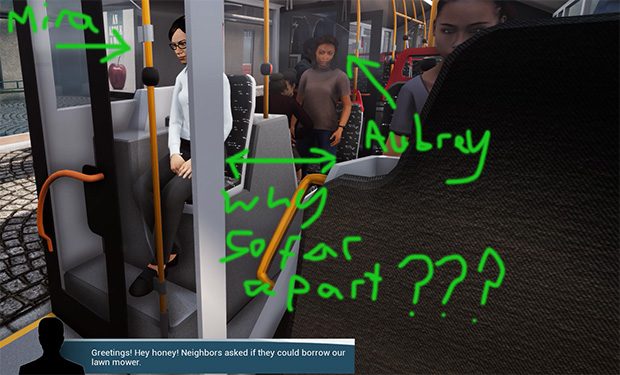 As they rode on, several feet apart and failing to further acknowledge each other in any way, I began to worry. What if 'lawnmower' is code for 'I don't love you any more?' Oh God, what if the wedding's off? And maybe Mira can't deal with that, and that's why she's hanging around on a bus, loudly talking to strangers about how perfect everything is with cartoonishly exaggerated cheer? Say it ain't so. C'mon, guys, you can get through this, right? Just think about all the amazing bus journeys you're going to have together over the rest of your wonderful lives together.

Whatever's going on with Mira and Aubrey, the important thing is that Mira doesn't tell me off even once, not when I drive through a red light, smash right through a road sign, mount the curb or - the ultimate transgression - fail to make it to a bus stop on time. She's far too happy to care, because she's on a motherfunkin' bus, yo.

Honestly, this woman is so infectiously invested in creating an efficient bus network for the city she lives in that I will move heaven and Earth to help make it happen for her. I even started the game over so I could record the entire tutorial:

Just as delightful second time around. But then, tragedy. Mira did not join me on my next journey. I looked hopefully over my right shoulder to where she had previously sat, offering high cheer from her eerily motionless face, praying she would suddenly appear, but it was empty, her honeyed tones no longer to be heard. I was alone. So alone.