If you click on a link and make a purchase we may receive a small commission. Read our editorial policy.
Developer: Bandai Namco Studios
Publisher: Bandai Namco Entertainment

Code Vein is a sexist action RPG about post-apocalyptic vampires that borrows liberally from Dark Souls, while speeding up and complicating its combat in ways that I really like. The plot's a bit rubbish.

Code Vein wears its anime influences on its sleeves, when it bothers to wear clothes at all. As the game starts, we learn that some blokes with big swords defeated an evil queen, but not before she'd blown up the world and turned nearly everyone into "revenants" via an airborne plague. Revenants can't die, but they do turn into monsters if they don't drink enough blood, usually harvested from increasingly rare magic plants. Monsterisation also occurs if they take their gas masks off, unless it's at a specific moment where the main characters need to look cool.

One of my first review notes was "this is going to be consistently embarrassingly booby, isn’t it?". I can't remember if I wrote that after realising how 80% of the female player character presets are missing 80% of their clothes, or whether it was when the opening cutscene introduced me to this person('s breasts). 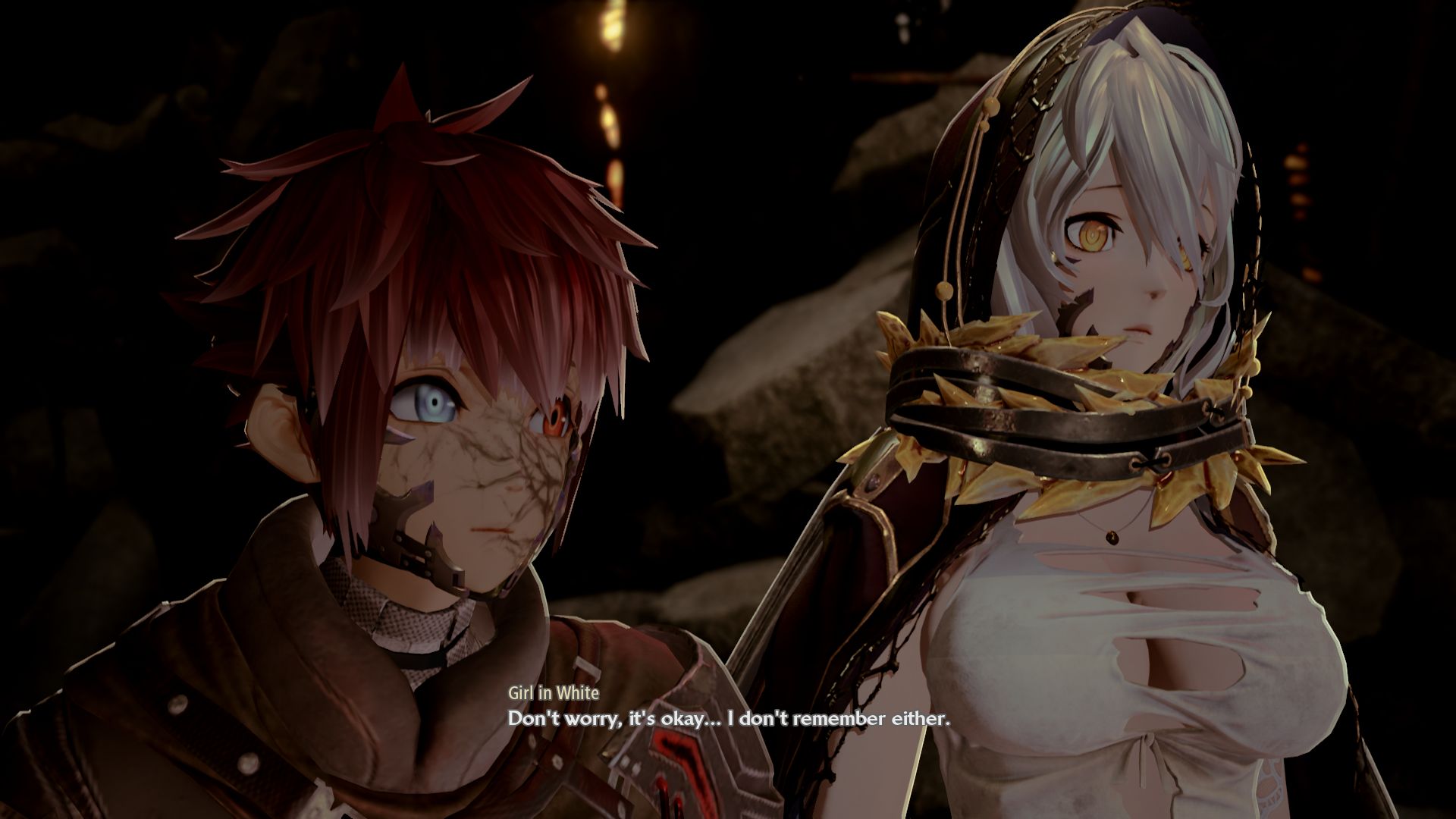 With one or two dubious exceptions, every woman in the game is rolled out as eye candy, and a genuinely tedious number of gigantic corrupted boss monsters wear nothing but bras and thongs. One cutscene used the same ridiculous 'panning up from breasts to face' shot three times. This shit can jump straight in the same bin as all those ads you used to see for terrible browser-based strategy games. Even so, I still probably wouldn't have chosen 'sexist' as my first descriptor of the game, if not for the cutscene shown in this screenshot. 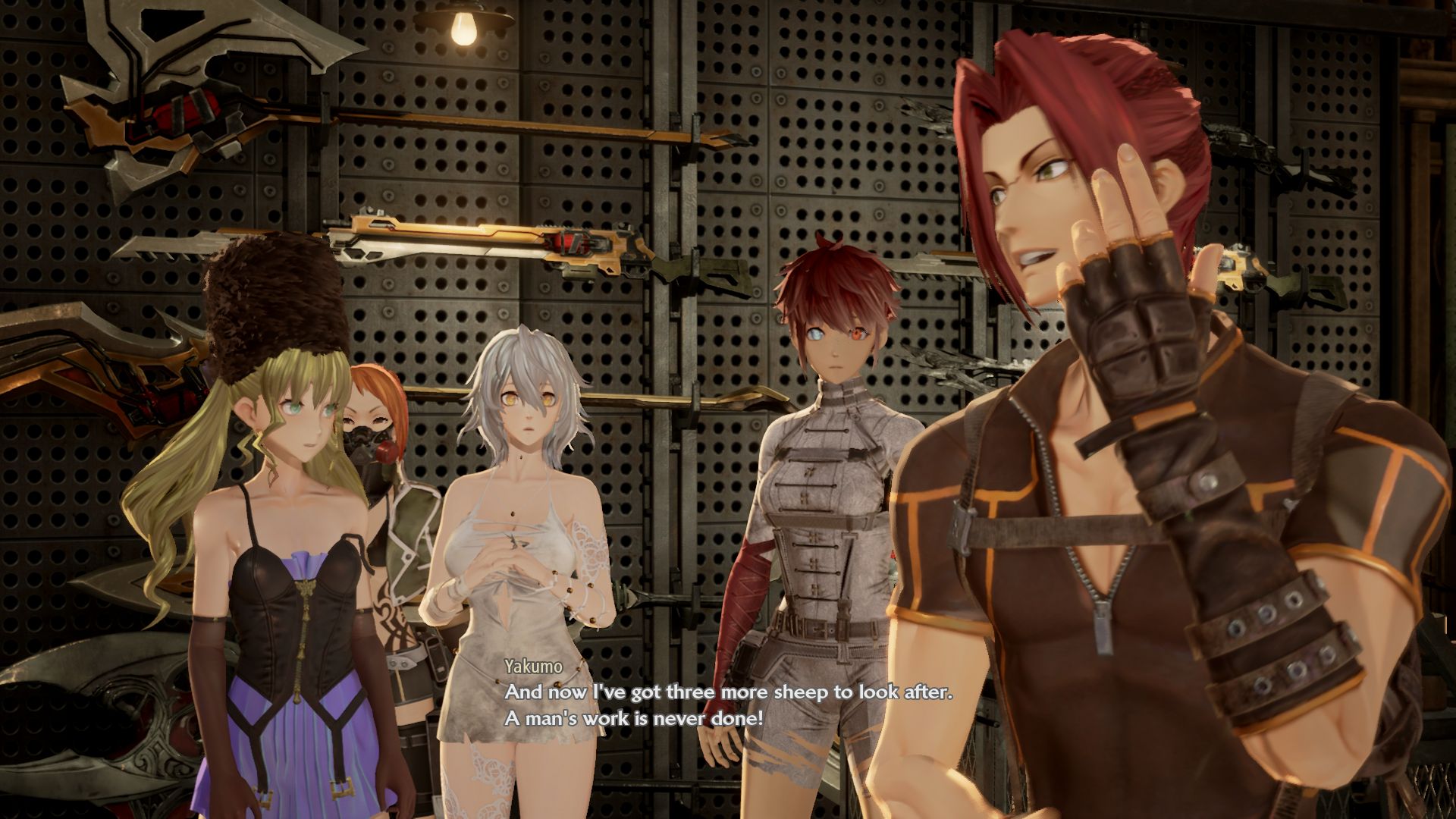 Titillation is one thing, but having one of the main heroes allude to three women as animal followers that it's his manly duty to take care of, is quite another. He isn't called on this, to be clear. The women smile and nod, meekly. It's embarrassing, and it's hard to take it at anything other than face value in a game where a central female character mysteriously never gets the tattered remains of her top fixed.

This is all particularly frustrating because, when Code Vein stopped haranguing me with fantasy busts, I found myself having a pretty good time. Not because of the level design, characters, or story, which are all equally shonky (though I should mention it's a big game, and I haven't quite made it to the end yet). No, it's because of the combat, which is good enough to make all these problems worth putting up with.

It's overwhelming, at first, but that's one of the reasons why I like it. You're fighting the corrupted souls of former fellow revenants, which are bigger and more bestial depending on how strong they were back when they could hold a conversation. Even the bog-standard enemies are good 'n' deadly, sometimes ready to snaffle half your healthbar over a single mistimed dodge. If your mind wanders mid-fight, expect to spend some time wandering back to where you died. It's the same 'one strike and you're out' deal from Dark Souls, where you only get to keep your XP if you manage to reclaim it. 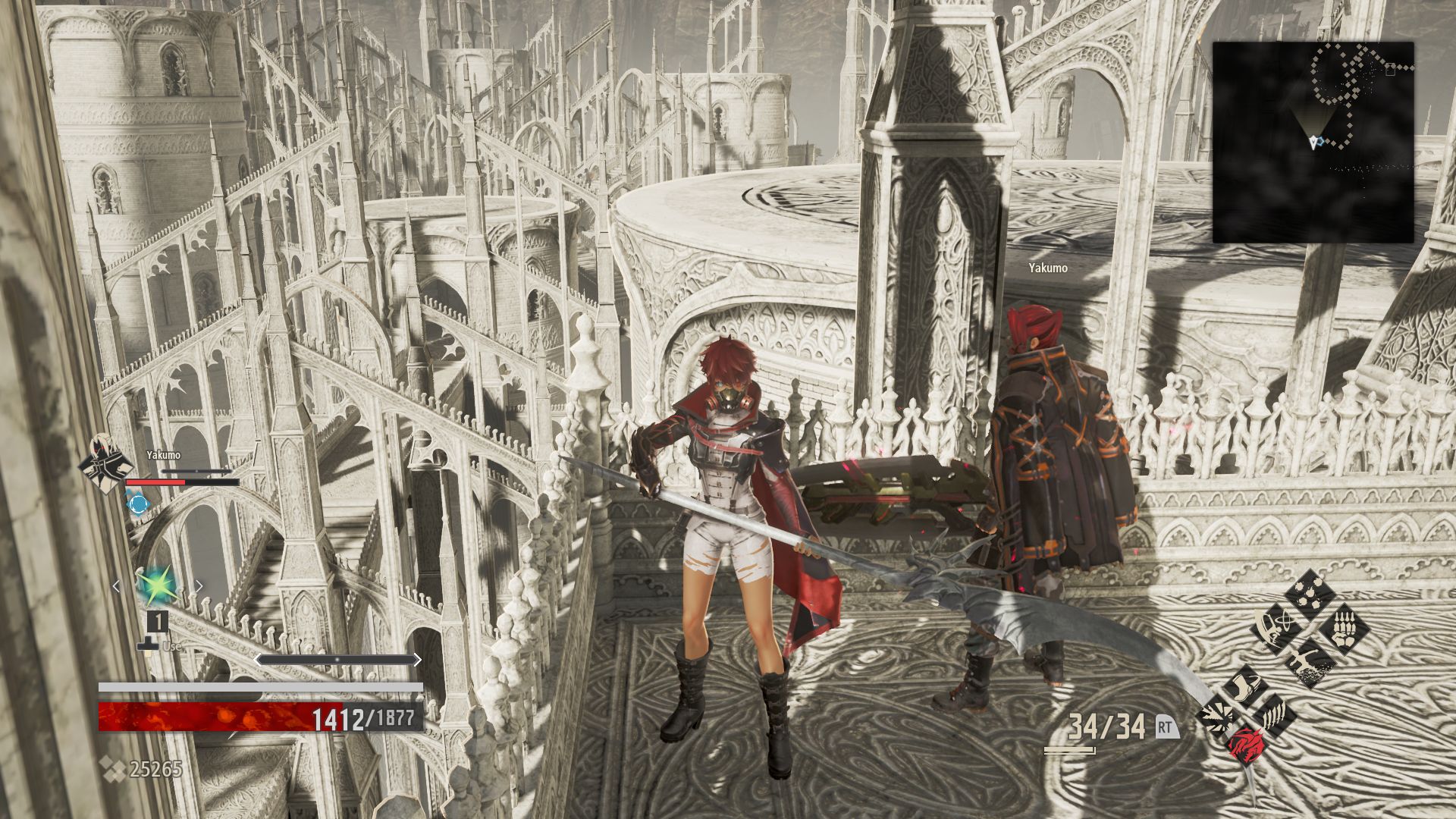 Backstabs and parries are staple moves, triggering lengthy animations where you turn invulnerable and do colossal damage. While my Dark Souls bloke was satisfied with a restrained throat slice or a businesslike impaling, in Code Vein you're more likely to grow dual snarling wolf heads from your shirt sleeves and bite your poor target's head off. These are "Drain" moves, so called because they rip out "ichor", which you can use to fuel your special abilities.

It's dead clever. You can equip up to eight active abilities at once, picked from a roster of class archetypes that you discover throughout the game, usually by seeking out spiky red blobs with dead people's memories in them. These archetypes determine your stats and specialities. Hunters are nimble and favour ranged attacks, while Berserkers have high health and enjoy whacking ghouls with big hammers. The masterstroke is the way you can mix and match between these styles. 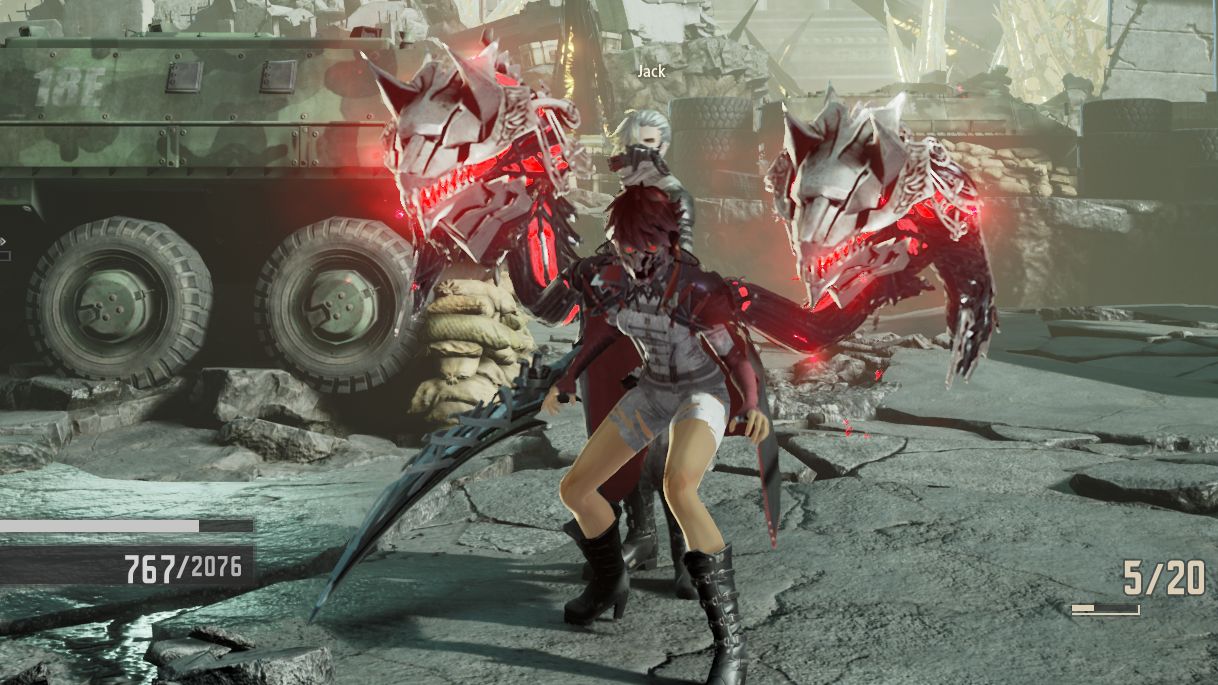 Once you've spent a little while using an ability under one archetype, you get to pop it into any build you like (as long as you still meet certain stat requirements). The scope for inventive, personalised class design, therefore, is tremendous. I like staying mobile, swooping about the battlefield with teleport attacks and a scythe equipped. I'm fond of a charged-up heavy attack, from my current weapon, that scoots me forward in a lengthy slide and impales every poor sod I've managed to line up. My teleports mostly come from the 'fragile but agile' class archetype I'm wearing, but I've also pinched an ability from the Berserker archetype, which enhances the damage of my next attack. I can make crowds vanish with one well-judged slide. It's gleeful.

Tying the resource that powers snazzy abilities into specific attacks feels much more empowering than waiting for cooldowns or recharging mana pools. You do get some ichor just for plain old killing, but playing well means balancing opportunities for Drain attacks with the need to stay alive. Although it's a shame your best bet usually involves backstabs or parries anyway, which undermines the whole balancing act. Other drain attacks leave you vulnerable, and before I realised how good backstabs were I enjoyed constantly weighing up whether it was worth chancing one. I'd count re-balancing that as a refinement to an already impressive method of monster-boshing, though. It rewards creativity in a way that Dark Souls never did. 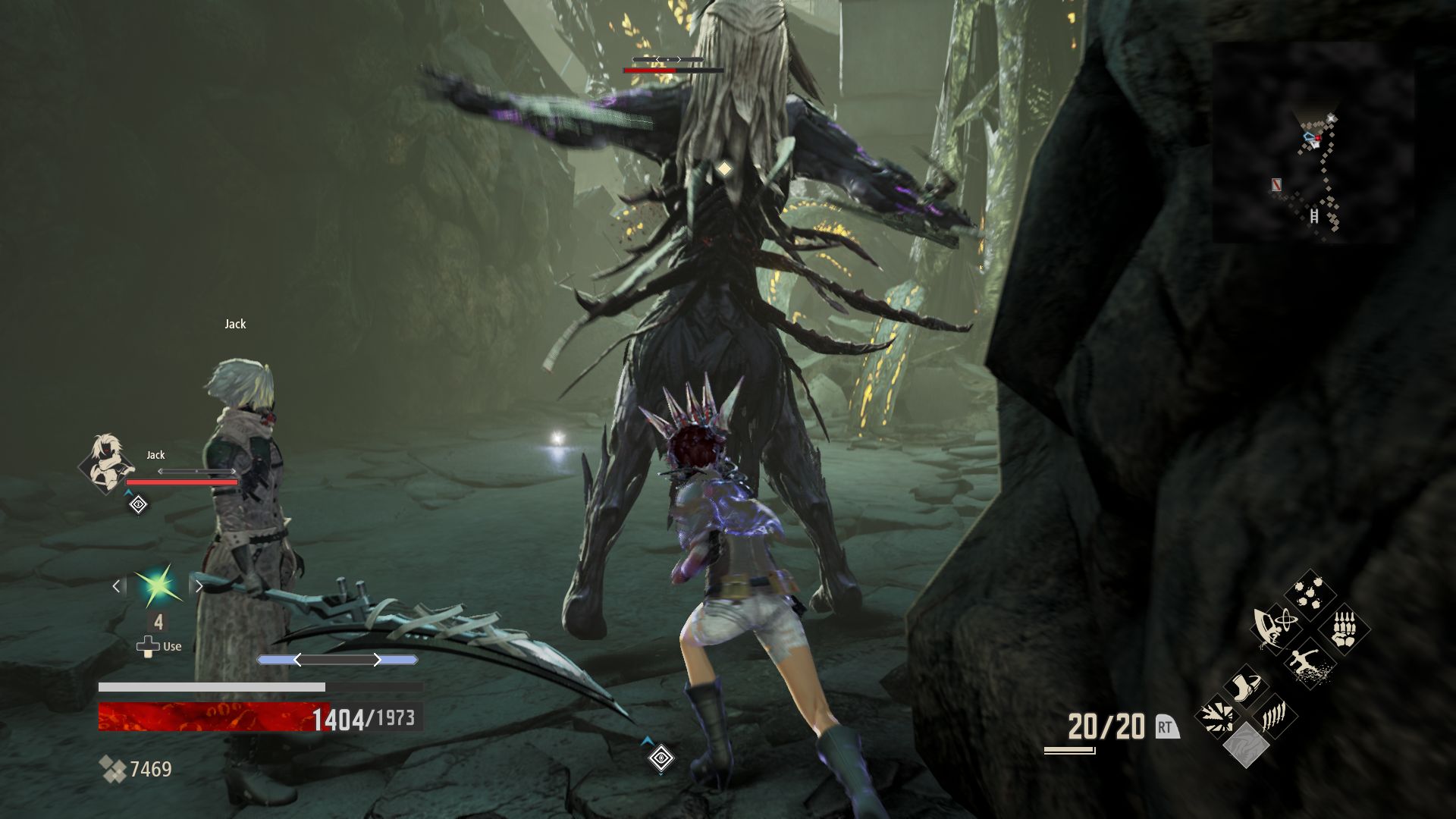 I know I keep coming back to that comparison, but that's because Code Vein clearly wants me to. And of course, ultimately, it can't stand up to it. For all I've just praised the combat, fights are often messy. I sometimes get trapped in a sequence of attacks that stagger me, leaving me to gnash my teeth as I go from peachy to perished. Later areas fall back on some of the same enemies as earlier ones, too, leading to anti-climaxes when you finally emerge into a new zone, only to find more of the same in terms of opposition.

And the zones. Ahh, the terrible zones. And so this review swerves away from what I liked about the game once more, to continue discussing its gaping flaws.

The earlier areas are miserable. Drab and dingy, with one particular extended nightmare that forces you to wade through water and darkness. A later level takes place in a deliberately confusing Escher-esque labyrinth of cream-coloured walkways and stairs, riddled with holes that you're tricked into falling through. Other areas also lean too hard on perilous drops, but the Cathedral of Sacred Blood is something else. I despise getting lost in games, and that area actively rubbed my face in it. For bloody ages, too.

All the areas try to weave in Soulsy shortcuts, opening up paths that skirt through gauntlets you've already managed to wade through. I never found one that elicited the same sense of joyous relief as felt in Dark Souls, though. Enemies hit hard, but the constant presence of an AI partner who can revive you makes battles much more forgiving. Four times out of five, I never even wound up using those shortcuts. 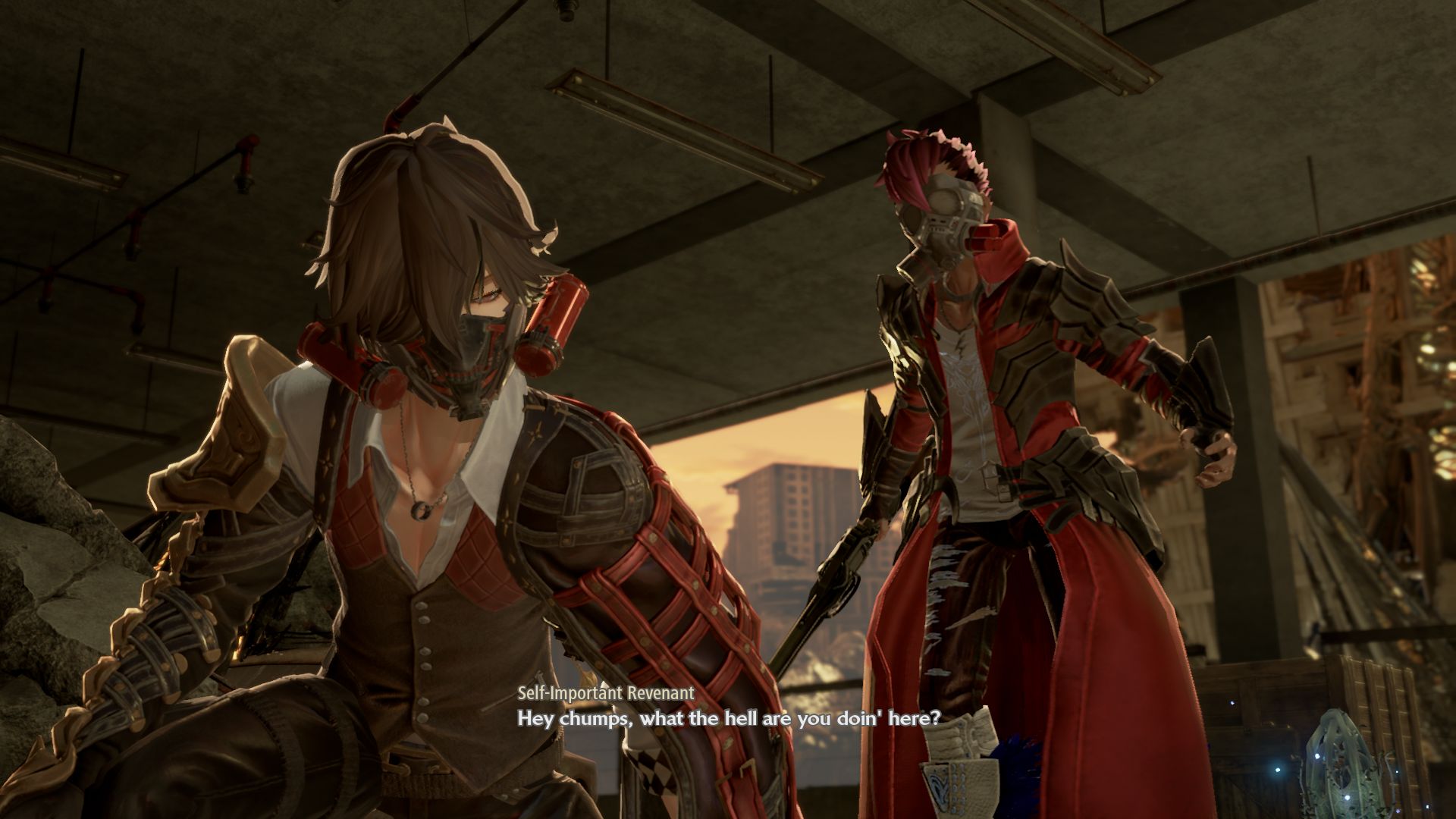 Those AI partners are some of the worst people it's ever been my misfortune to hang out with in a videogame. They're incessant, never shutting up with their endless and unhelpful blabber. 'Oooh, looks like you've run out of healing supplies', they'll crow, 'Tssk, be careful on that ladder'. They scold me about running too far ahead, about venturing too near cliffs, or getting low on health in the middle of a fight. One of them asked if it was my intention to "die like a dog". There is no way to turn this off. Believe me, I have checked.

They're obnoxious, one note characters that I wouldn't have paid any attention to if not for professional obligation. Their plight lacks any sense of credibility, mired in hokey cliché and clumsy gestures at concepts like loyalty, determination and justice. Minor but recurring characters come labelled with their own adjectives, like 'self-important' or 'dependable'. I have never seen a more egregious example of telling over showing. 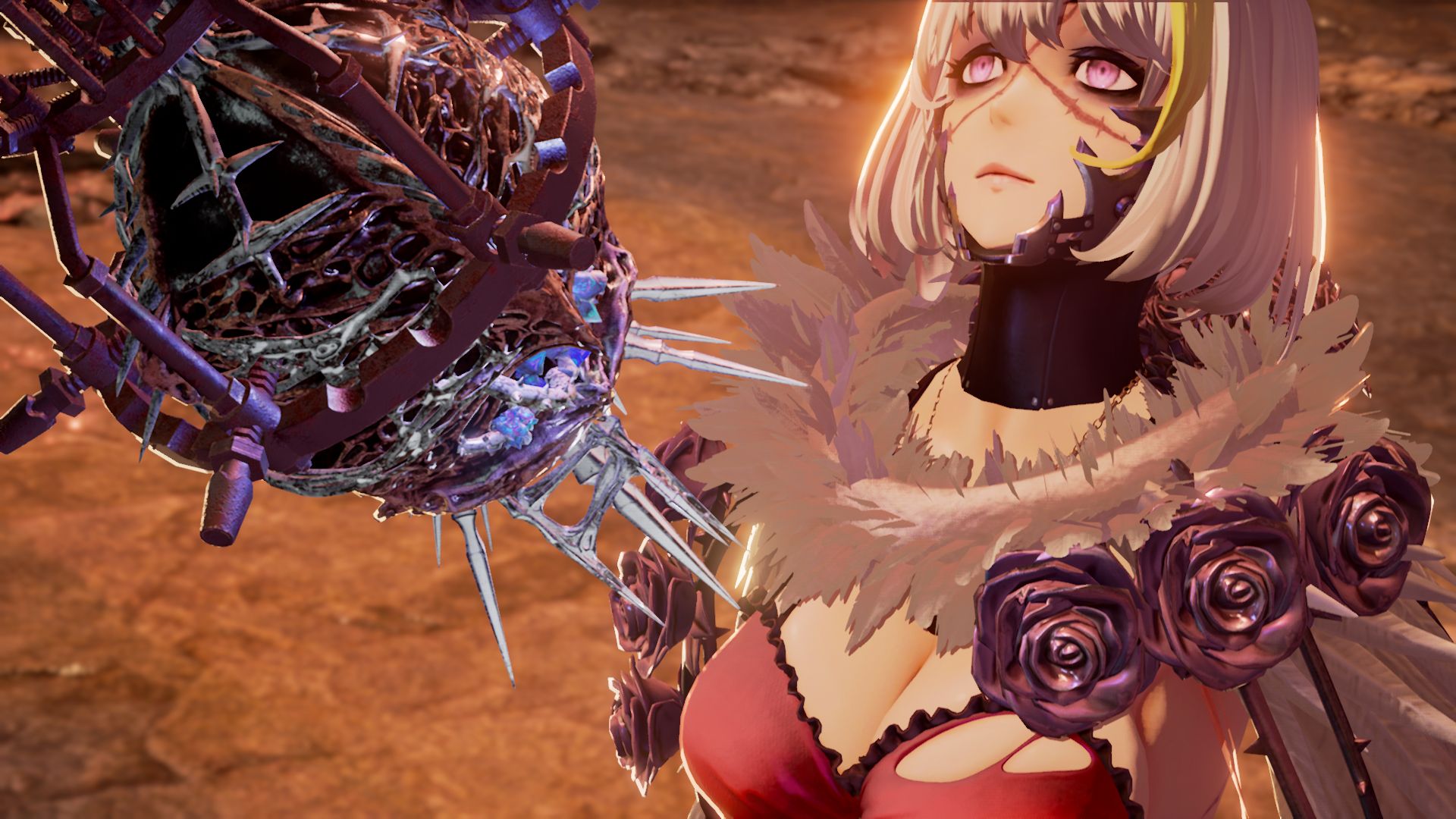 When your companions aren't jabbering away in the middle of exploration, though, this is at least mostly skippable. It's possible to reduce your exposure to the plot down to moments of confused exasperation, such as 'why did that man just slam a blue spiky thing into that woman's boobs?'. I don't want to trivialise the sexism, though, because it's far from harmless. Including a competent female fighter doesn't stop Code Vein from lecherously painting women as subservient objects or monstrous villains. These are archaic tropes I can't endorse.

But yes, I'm enjoying myself. Mobile, high-stakes combat tied to interesting, ever-expanding abilities is a recipe that can withstand slightly repetitive enemy design and shoddy environments. I still feel the pull to keep playing, to unearth new classes and experiment with all the ways I can mash them together. The only good part of Code Vein is its combat, but for me, that turns out to be enough.