Eververse, the premiere Destiny 2 fashion house, last night revealed its spring collection of street wear for Season Of The Worthy. Reactions from fashionistas have been loud and charged. I adore this collection, welcoming the option for some more casual duds, even if the Warlock outfit in the middle is so ludicrously, wonderfully, decadently uncasual (a look I think works for the class). The big shock is the outfits for the agile, tricksy, gunslinging Hunter and the beefy, punchy, hammerhurling Titan. You thought it was the Hunter on the left, right? Naw mate, that's a Titan. The lad with the big plated arms is the Hunter. It's catwalk chaos.

Bungie revealed the next season's Eververse set in the latest This Week At Bungie post. Eververse is the cosmetics store which sells items for premium microtransaction cash, and some of them for the Bright Dust currency we can earn by playing. The season will bring plenty of other new armour but Eververse sets are often particularly fancy, interesting, or weird. And boy this street wear is interesting.

As a dedicated follower of spacefashion, prone to gushing over outfits, I adore the concept. Destiny has all sorts of body armour, from medieval through fantasy to military and sci-fi, but not much fashion-fashion. This is the sort of catwalk collection which straddles the line between high concept and actual street wear, some solid garments as the base layer then embellished with extra fanciness. The next year of fashion on The Last City's high street will surely be copying bits of this, motifs and materials spreading all over. 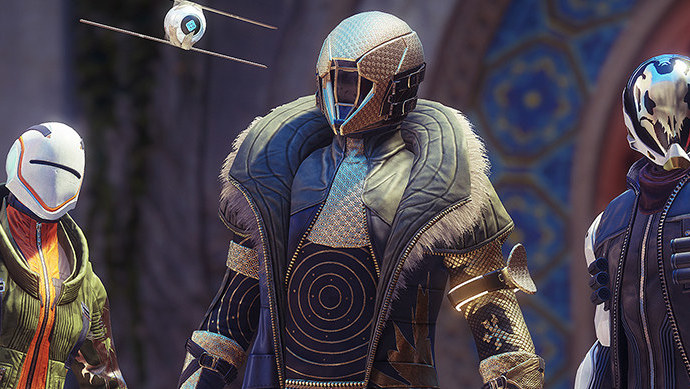 Let's start with the fanciest: the Warlock. That's a solid puffa coat there, made delightful by the giant fur-lined open collar. Good flow to the line of the neckpuffs too. The giant applique of an eagle, the Warlock's emblematic class critter, is a bit tacky but this is a longrunning Destiny problem. The shirt at the base layer is nice and surprisingly subtle, a strong design of concentric circles. AND THEN. Over that shirt is a glittering gorget, a nod to armour but wildly impractical. And then over that is a leather gilet which looks like it can't zip close. Then the sleeves have more circles and another eagle in quilted diamonds. And the gloves are so shiny. And the metal helmet echos the gorget. And the spangle on the ankle. And... there's so much. It's so much. Shame about the bond (the band on their left bicep) but that's a long-running Destiny fashion problem. I like this outfit so much. 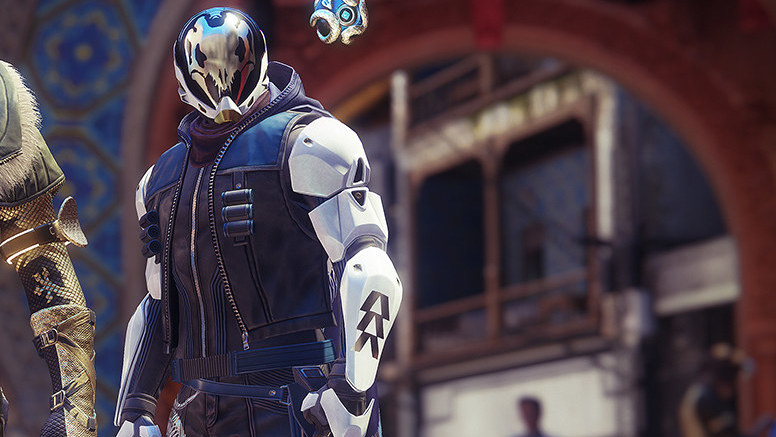 The Hunter outfit is great too, no doubt. Those arms are a clean pop of freshness with such lovely shapes. The jacket hangs nicely over the form-fitting vest, and I do like the zip continuing up along the collar. A real strong centre mass right there, some good Japanese streetwear vibes. The weird thing is, lots of this outfit is not great: the snake decal detracts from a otherwise-great helmet; a cape doesn't go with this outfit (those Hunters and their capes, eh?); I don't like the panelling on the boot toes; and I really don't like the trousers tucking into the boots.

However, the jacket and sleeves are so strong that I barely notice the other problems unless I'm looking for them. What style! I will mix-and-match the jacket parts in combination with so many other pieces in my spacewardrobe. 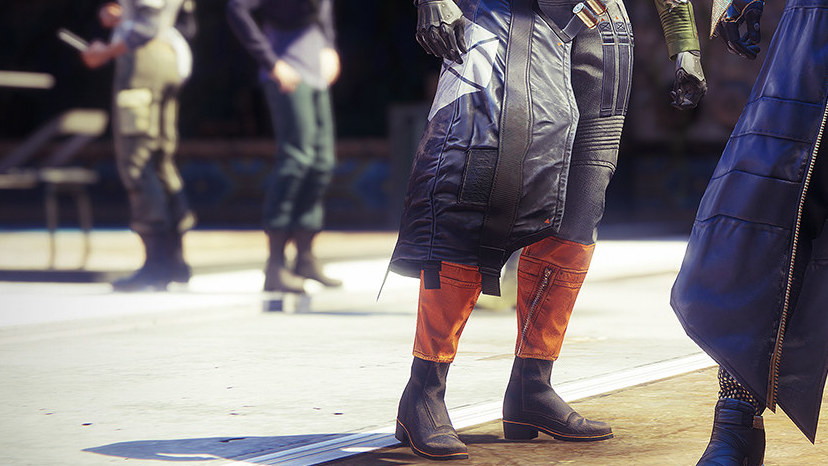 Lastly, the Titan. While it's being widely panned, I really like most of this outfit. It's another smack of Japanese streetwear, just with some crippling flaws. I like the jacket's wide collar and ribbing, though the default green is all wrong. The vest zips up weirdly high but has such texture I can almost feel it. The sleeves have good shape from the stripe and bars, and I'll be excited to try them in combination with other chestpieces - I hope they take new shader colours and materials well. Trousers would be cleaner and better without those vertical straps but otherwise have interesting detail, and the contrast of the lower leg pops nicely. Good boots too.

I think this Titan outfit is spoiled by the mark, that big mess of fabric hanging from the hip. It looks like stitched-together offcuts from the Hunter's jacket. And given the street wear theme, it seems a terrible missed opportunity for Bungie to replace the traditional 'fabric swatch' mark with a jacket or sweater tied lopsided around the waist - it'd resemble a mark but have a practical, fitting function. A new mark and a new jacket shader will fix the outfit.

Update: A Bungie community manager has since tweeted a few other shaders on the outfit and yup, I'm totally right. This will look great in other colours, see:

What's so contentious and shocking to Destiny fashionistas is that, mark and cape aside, the Hunter and Titan sets would perfectly fit the other class. Titans are beefy punchers, and Hunters are acrobatic assassins. Titans dress bulky, Hunters dress light. Why have they swapped clothes? I see dozens of threads and hundreds of comments about this switcheroo on Reddit alone.

"I will be changing my main class this season simply because the Titan armour looks so bad," declared one overdramatic fashionfiend.

But I like the Titan style and I am up for this dramatic change! I'm glad to see some bold and different new looks. It'll be nice to not always have huge arms and chunky shoulders for my Titan. Her wardrobe is full of pauldrons the size of sensible family cars. Those sleeves could go nicely with so many Titan armours too. And I definitely play punchier Hunter builds at times. This opens up a huge new fashion space for Titans and Hunters. Plus hey, fashion should always be transgressive.

I know I've said Eververse contributes to Destiny 2's FOMO problem but I absolutely will scrounge up the Bright Dust for all these outfits.

For the record: I would also be well up for giving Hunters a longer, looser, draped outfit encroaching on Warlock territory. Please, Bungie. 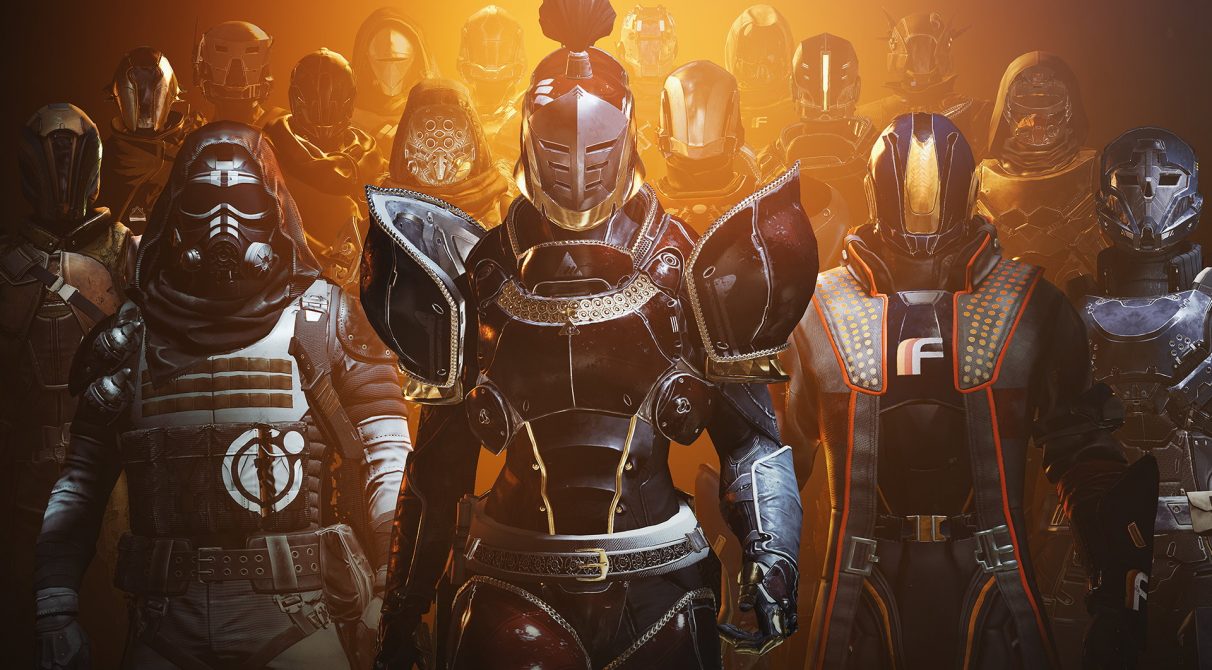 Season Of The Worthy will not be short on fashion opportunities either. The season pass will bring seasonal armour (with variants as ornaments), the Trials Of Osiris PvP mode will bring over its old gear from Destiny 1, and loads of currently-rare armour will be spread around. Bungie said in the blog post that Legendary Engrams will become able to drop armour from 11 different sets, up from the current 3. These will include the old Faction Rally sets, as well as some that currently only drop in weird niche situations. They also note that armour sets are more likely to have good stat rolls, so more good-lookin' gear will be usable. Do remember that seasonal mod slots will take mods across several seasons too.

Destiny 2's Season Of The Worthy starts next Tuesday, March 10th. Some parts of the calendar will be open to all players, but you'll need to buy the season pass to get it all.