Disintegration is V1 Interactive's upcoming sci-fi FPS meets RTS about putting human brains into robot bodies, and riding hoverbikes into battle to stop a civil war. I recently got a chance to find out a bit more about it all from game director Marcus Lehto (who you might recognise as one of the original creators of Halo).

He revealed some details about the multiplayer, what to expect from next week's beta, and let us know a bit of the background on developing Disintegration's new style of combat.

To catch you up on what we know so far about the game - it's set in a dystopian North America after the world has faced a global pandemic, and scientists start putting people's brains into robot bodies to save what's left of humanity. Years later, most of the robot people turn a bit evil and start hunting down the remaining humans, forcing them to Integrate like them, or die.

In the game's single player you play as an outcast from the evil Integrated, working to save the humans, and ultimately find a way to become human again. You do this by shooting lots of baddies and commanding squads from a gravcycle (read: big shooty hoverbike).

"I really ask everybody to throw away their preconceptions of how a first-person shooter from this gravcycle perspective is going to work. It's a different experience altogether. It's much faster paced than a typical RTS, and it's slower paced than your typical first person shooters," Lehto says of the new hybrid style.

"It's this middleground where you have these moments of high intensity combat, where you and your gravcycle and your ground units are in the midst of combat, but these moments beforehand, leading up to that combat where you can tactically lay out what you plan to do. It also offers you the opportunity to then take a breather after that combat scenario is complete, to search for salvage and other things that you can use."

Before changing over to the first-person shooter style, Disintegration started life as a completely traditional RTS (similarly to how the idea for Halo came about), where we would've just been a camera in the sky commanding troops running around on the ground.

"We turned that camera in the sky into the vehicle we call the gravcycle. That gives you the ability to move freely throughout the environment, and to actually be an active participant in combat on the ground along with your units," Lehto explained.

"It did present a significant number of challenges for us, and making sure that we didn't overwhelm the player with asking them to do too much was one of them. It took a long time to iterate back and forth and make sure that the fluidity of combat with the gravcycle along with issuing commands to those ground units became this seamless, very fluid and very natural kind of interaction." 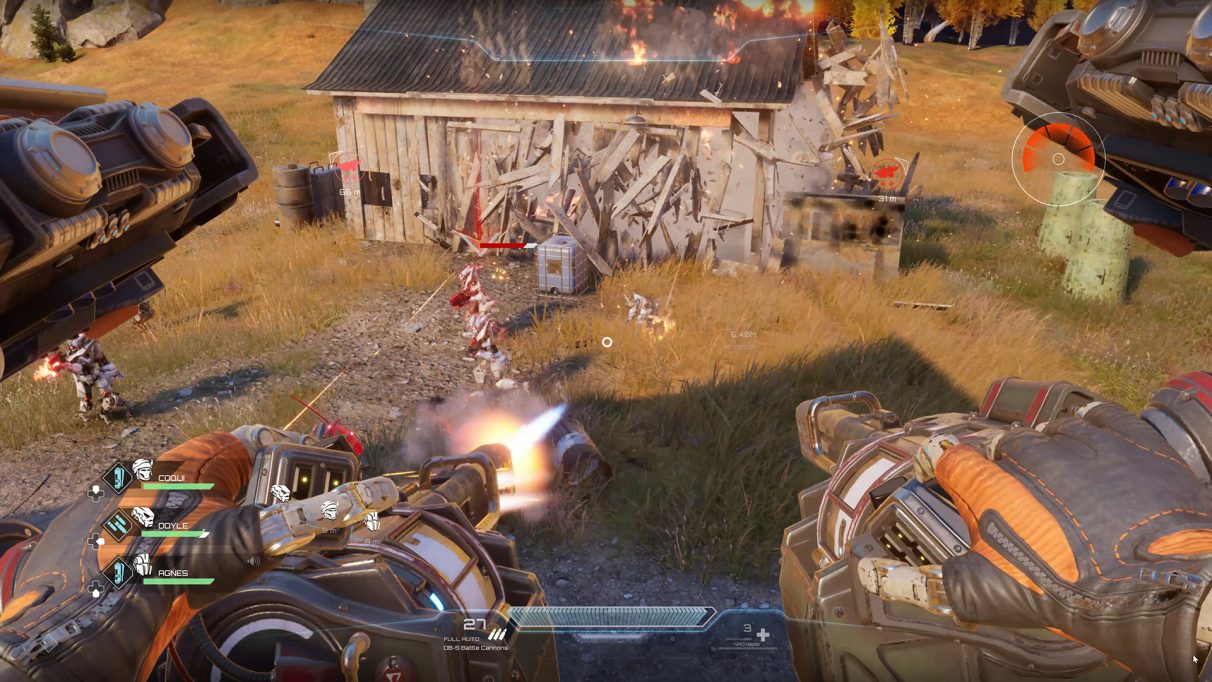 Next week we'll get a chance to see how it works in the multiplayer during the technical and open betas. During these, players will get to have a go at two game modes on offer - Zone Control and Retrieval.

Zone Control is fairly self-explanatory, players will be able to capture three zones on a map, and the team that's held them for the longest wins. Retrieval will have teams collecting objects from one of two places, then delivering them into enemy territory. Each of these will have a unique map to play on, and you'll be able to play as one of seven crews.

Each crew is made up of one "gravcycler" who you'll play as, and four NPCs on the ground for you to direct about. The crews are all colourful with funky designs, and each serves a slightly different purpose on the battlefield. Some are more tanky and some are more nimble for quick engagements, so you'll get to play around with what sort of style you prefer in each match. Or you can play like I do, and just use the character you think looks the coolest. You'll be able to earn and unlock cosmetic items too, so you could make them look even cooler.

"We've taken a more whimsical approach with the characters that you choose," said Lehto. "We wanted to make sure that this felt like a fun kind of environment for players to engage in, we're kind of envisioning what the biker gangs of the future might be like."

The full game will have nine crews to choose from, and there'll be three game modes - the last mode is called Collector, and sounds like it plays just like Destiny's Supremacy, or Call Of Duty's Kill Confirmed, except in Disintegration you'll be picking up enemies brain cans once you kill them. It threw me off the first time Marcus Lehto said "brain cans", and I'm still finding the prospect of just picking up some dude's brain mid-fight quite funny. But anyway! These game modes will all have custom maps to suit each mode too, and support up to five player PvP. 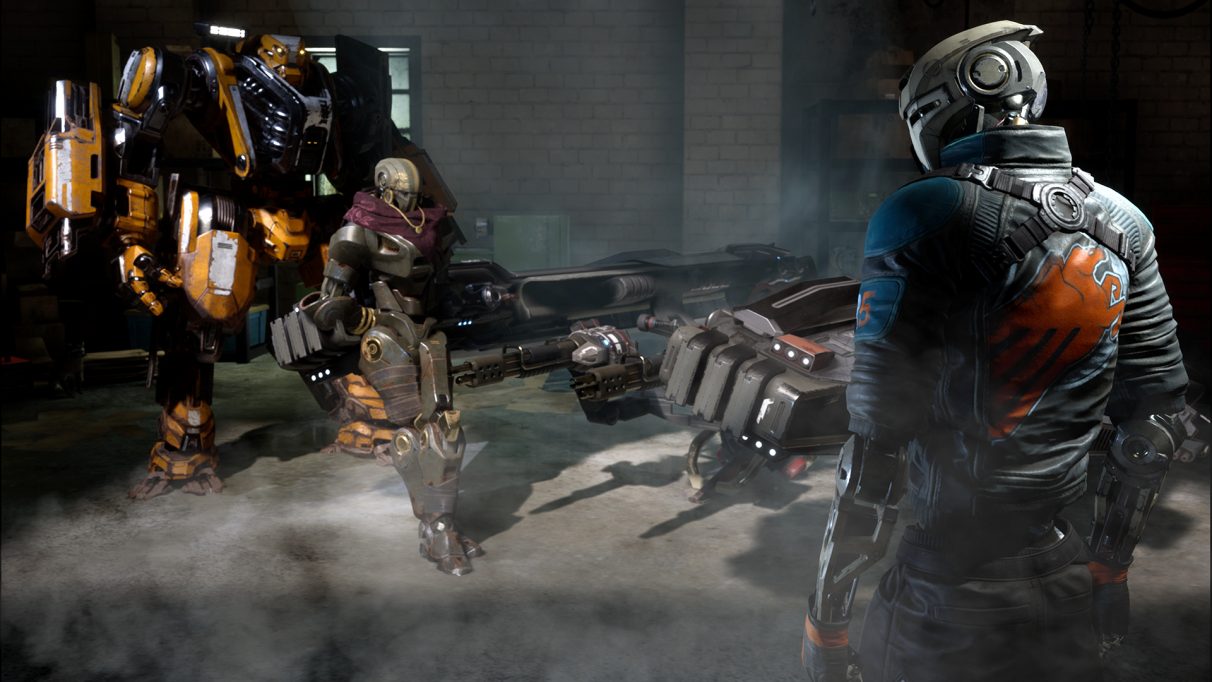 In regards to the single player, for now we know that in all the story missions you'll play as main character Romer Shoal, and you'll get to use a unique gravcycle each time with different weapons and abilities, as well as new story characters and crew members.

The campaign will apparently take around 10 hours to complete, with a few different difficulty levels for those of you who fancy a bit more of a challenge - or less of a challenge if you just want to chill out and play through the cheerful story of humanity's demise. According to Lehto the story is loosely based on what could happen to humans in the future, though the game isn't all doom and gloom.

"It's a dark time for humanity, but we wanted to make sure that the humans inside our robotic characters have that human quality and that banter with one another - they can give each other a little jab in the ribs every now and then with a joke to lighten the mood and to really showcase who they are."

I'll be honest, I've not been that convinced by much of what I've seen so far. Disintegration looks an awful lot like other games we've had over the last few years, Destiny and Anthem being the first that come to mind. I asked Lehto how the game would establish a more unique identity amongst all of these, and he told me players just need to get their hands on it so they can see what it's really like. Which is a totally fair point, so I'll wait until after I've experienced it a bit in the beta before I pass judgement.

"It's a very different gameplay experience overall than any game out there on the market," he said. "It's a big risk we're taking to build this game in and to try to fill this kind of niche that doesn't exist at the moment. So I'm real excited for people to start playing the game and see what it is on its own merits, and how unique it really is."

"We're definitely very ambitious here at V1. We're real excited about the fact that, while the game we set out to build was much smaller that when we first pitched it around, it grew in scale, and it grew in complexity, and in depth, and it happened because we're also very passionate about what we're making. But we're also doing it in a way making sure that everybody here at V1 remains healthy, in and out of the office, and isn't working themselves to death, because we've seen too much of that in the past being with the big studios."

There's no release date for Disintegration just yet, but we're told it'll be revealed soon. In the meantime, you can sign up for the open beta on their website.