If dressing Overwatch heroes up as bees, firefighters or David Bowie tributes isn't enough for you, then I've got good news - from the start of next year, you'll be able to don the colours of your favourite esports team. Blizzard have announced that the custom team skins available for each team competing in the Overwatch League will also be available for their supporters, though they can only be bought using a special currency. I've laid out all the details below, along with the lowdown on the Overwatch League itself.

Nate compares the skins to sports jerseys, and highlights how some of the money from each purchase will go into the pockets of that team. It's all in keeping with the Overwatch League's goal of providing a competitive environment that's similar to traditional sports, where the players all receive a salary and health insurance in addition to any prize earnings. The skins can be bought using League Tokens, and everyone will receive enough to buy their first skin for free. It's not confirmed whether you'll have to lay down some real money to get more tokens, but my guess would be that you will.

Redditor FieryREIGN has gathered an example skin from each team into one handy image. 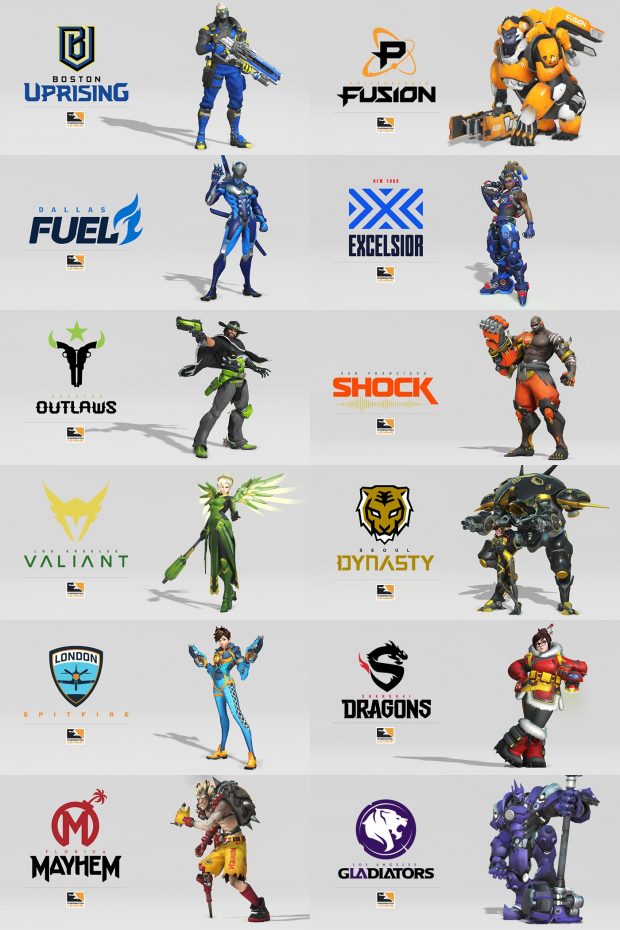 So, how will the Overwatch League work? In short, it's a global esports league with city-based teams that'll conclude on July 28 next year with a cool $1,000,000 going to the winning team. In long:

The league proper will start in Los Angeles on January 10, with the first of four stages that'll each last five weeks. Each team will play twice a week, so there'll be 3 matches a day running from Wednesday to Saturday. At the end of each stage, there'll be a playoff where the winning team will take home $125,000, before a 10-day gap before the next stage. The overall league standings will be based on each team's performance across every stage.

There's a Pacific and an Atlantic division, and across the four stages each team will play 20 games within their division and 20 cross-division games. The highest scoring team from each division will go straight into the championships playoffs that run from June 11 – July 22, where they'll be joined by the next four highest scoring teams from either division. The grand final will take place from July 26-28.

You can find (many) more details in this post, and here's a youtube playlist introducing each of the teams.

If you can't wait, there are 12 preseason exhibition matches that start from tomorrow - here's the schedule in full.