I have been, since November, utterly enamoured with digital Ptolemaic Egypt. Assassin's Creed Origins’ snowglobe version of the kingdom makes it excellent fodder for long, meandering walks and screenshots of tantalising vistas, but it's the small vignettes of daily life and scenes of mundanity that make Egypt feel less like just another theme park.

Since the first Assassin’s Creed, Ubisoft Montreal has used scale as its default weapon. Huge towers, massive crowds, more map icons than the eye can handle. But while, yes, Origins is still a gargantuan game, it’s one that spends a lot of time zoomed in on the streets instead of hovering around the rooftops. It’s inspired me to do the same, accompanied by the game's impressive photo mode. It pauses the action and unlocks the camera at the press of a button, letting you tweak the image with filters and by changing things like contrast and depth of field.

Most of the photos here are unedited, however, as Origins rarely looks less than its best. Click on them to see the full-sized versions. 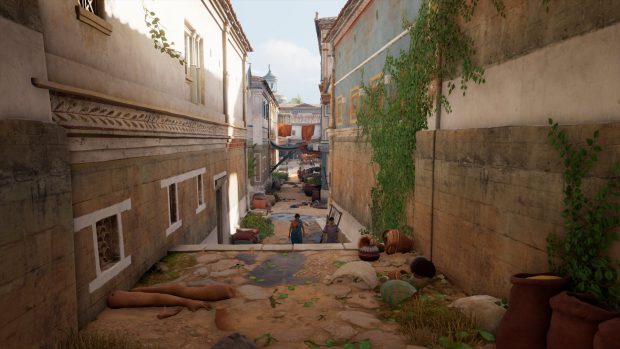 With the crowds toned down since the visually impressive but incredibly cluttered hordes of Unity, the eye is drawn to the environment, where Ubisoft’s army of artists have created striking scenes in the most everyday places. Even alleys, like the above in Alexandria, look well thought out and blessed with small touches of context. The detritus from workshops and homes, the distinct Greek architecture, the slow invasion of weeds -- there’s a strong sense of place.

And these streets and alleys, in their thousands, reflect Ptolemaic Egypt’s collision of cultures and eras. Its citizens and visitors walk beneath ruins from the Old Kingdom and new marble temples that wouldn’t look out of place in Athens, turning it into a vertical slice of the ancient world. At times it’s a melting pot of Greeks, Romans and Egyptians, but there are clashes and inequity that serve as the secondary story that underpins Bayek’s quest for revenge. 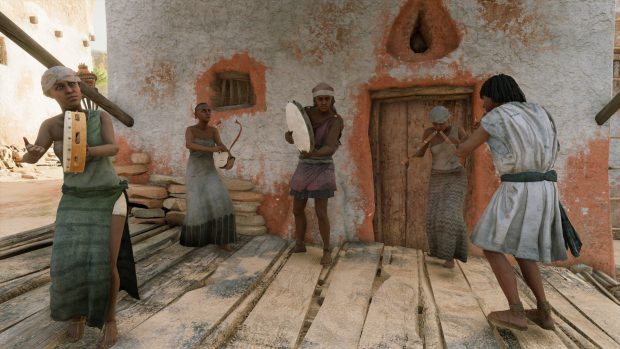 Here, in the Egyptian part of Alexandria, musicians play in an area that sits literally below the more affluent and dominant Greek parts of the city. 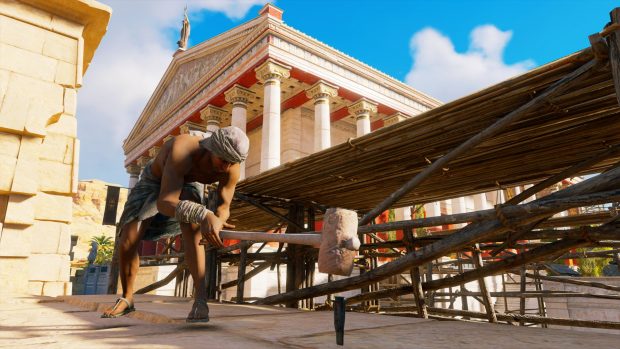 Overwhelmingly the peasants and labourers of Egypt are African, often working for Greek or Roman masters. Optional quests occasionally explore the tensions between them, with Bayek getting opportunities to arbitrate or help in other ways, but most of the heavy lifting is done with incidental characters and their basic routines. 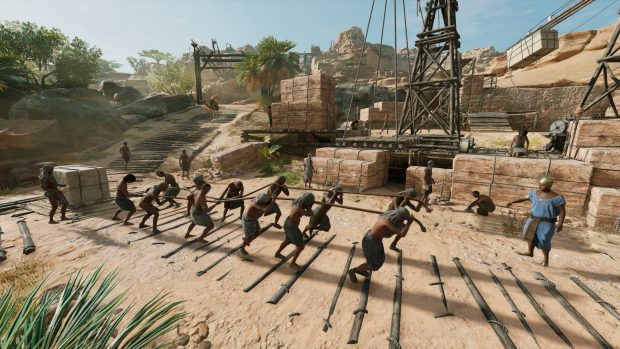 While the Pyramids were not built by slaves, indentured servants, forced labourers and workers who had effectively lost their freedom weren’t uncommon, though they did have more rights than their counterparts in other areas of the world. As a practice it became even more popular under Greek and Roman influence. I wondered, as I watched these fellas work, if they were doing it for pay, or if they were slaves.

Bayek's in a weird position compared to the Assassins that follow him in that he's not an outcast, instead he's an important agent of a royal. Indeed, he's not even an Assassin, as the order doesn't exist yet. But Origins' RPG-like structure and abundance of side quests see him fight tyranny far more effectively than the likes of Edward or Ezio, solving problems by doing more than just stabbing everyone who isn't a civilian. It chips away at the series' ludonarrative dissonance, where supposedly good people fight for the little guy only by slitting throats. 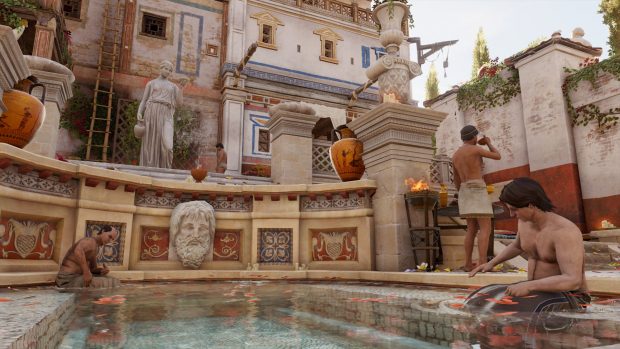 After leaving the workers, I wandered into this bathhouse and brothel (a different kind of B&B) in Cyrene, an ex-Greek colony in what is now Libya. Bayek was one of the only non-white guests. 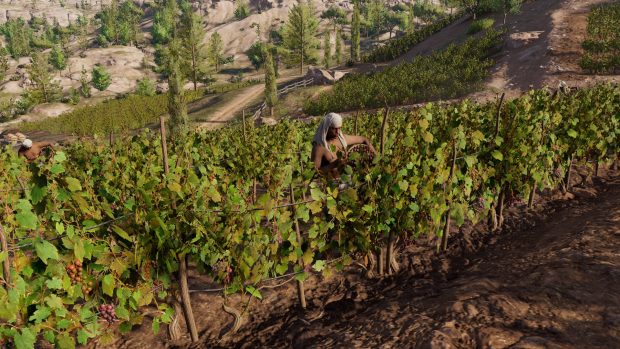 Here, in the lush mountains outside the city, the wine these boozy Greeks and Romans enjoy with their baths and lady friends begins its life. 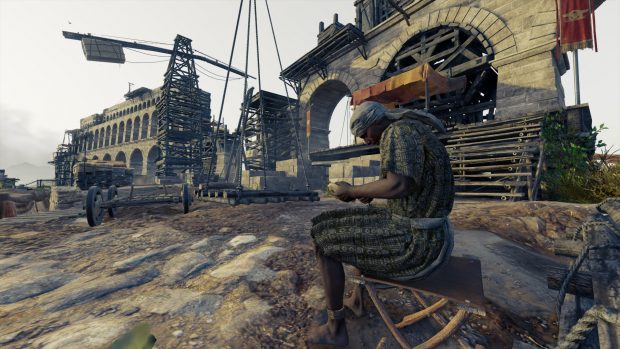 Cyrene comes near the end of the game. You can head there whenever you want, of course, but it’s designed for higher levels. There’s a good chance, then, that when you reach the province, you’ll already be well into the story, just as Rome starts to become a bigger player. Entering Cyrene feels like entering the Republic (and soon-to-be Empire), with its aqueduct, a monument to Roman engineering, dominating the landscape. They do have a tendency to overcompensate.

The history of the place is an unusual one. It was founded by Greeks, eventually swallowed up by Ptolemaic Egypt and then finally gifted to the Roman Republic in the last ruler’s will. It wasn’t even his idea; it was his father’s, who had made a deal with the Romans so that they'd inherit Cyrene upon his death if he had no heirs. He did have an heir, however, but when his son Ptolemy Apion needed Rome's help again, the same deal was made. He had no heirs and Rome got Cyrene. 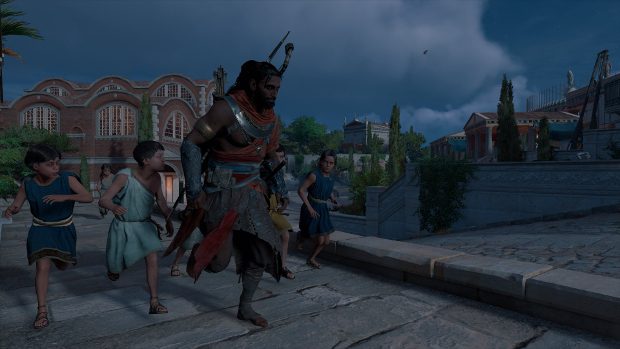 On the topic of dads: Bayek sets the bar pretty high. At least in the land of video games, where dads are invariably terrible. While his son’s death is the impetus for his bloody quest, it’s not what defines him, and it’s not used as an excuse to make him yet another dour and vengeful man. He’s generous and paternal, and is never happier than when he’s with kids. He’s vulnerable and open in a way that previous protagonists never were.

This takes on a literal meaning with the iconic Assassin’s hood becoming optional. Aside from the occasional exception like Liberation, the hood is the mark of an Assassin, and always goes up when there’s work to do -- some sneaking, some murder -- but you can play through the entirety of Origins with Bayek never covering up his handsome mug. He’s not in hiding, and his attempts to serve Egypt and help out its people aren’t really done from the shadows. He’s made in the mold of the classic hero rather than the anti-hero the series normally favours. 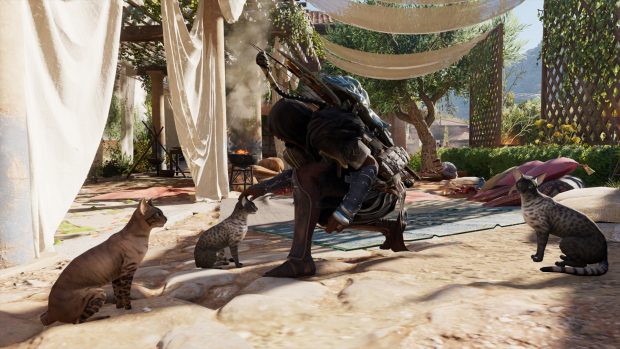 Also he flipping loves cats. And they love him right back.

Origins’ sacred kitties are the most gregarious beasties. While others flee, attack or ignore, cats follow Bayek around and hang about waiting for him to pet them. I stopped to give these three some attention after robbing their owner. Sorry, cats! 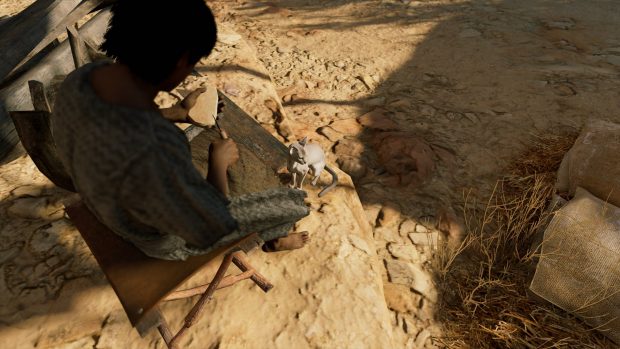 I'd just managed to slip away from some pesky guards when I happened across this guy chipping away at some stone while a cat perfected its air of utter indifference. 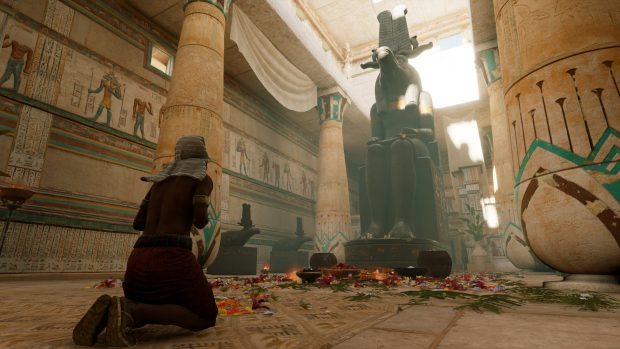 Just as cats are protected by Bastet, the less friendly crocodiles are connected to the god Sobek, seen here looming over a worshiper. Egypt’s temples are presented as stunning kaleidoscopic complexes, their walls covered in art and myths, their floors covered in flower petals. 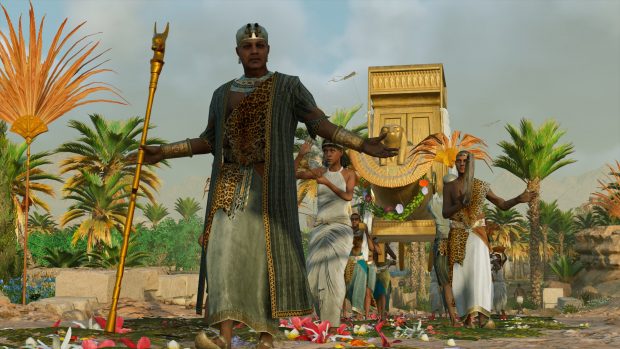 While out chasing goats, I came across this random procession being led by a priest in his leopard-skin getup. Because animals like the leopard were sacred, their skins were only worn by royalty and big-shot priests (other priests had to be content with fakes). Sem priests, who were involved in funerary rites, often wore leopard skin too. Maybe, then, the procession was a funeral. Not a sad one, mind. I mean just look at this guy. He was born to lead these things, swinging his big staff around, pumping up the crowds. I followed them for a good while, completely forgetting about the animal I was tracking.

Previous Assassin’s Creed games have focused on Christianity, spinning a Dan Brown conspiracy yarn with the Templar’s using the Church to control the masses. While Egypt has its corrupt priests, religion is more a reflection of culture in Origins, rather than a tool wielded by oppressors. It’s a way for people to connect to their past even in the face of interpretatio graeca and romano. 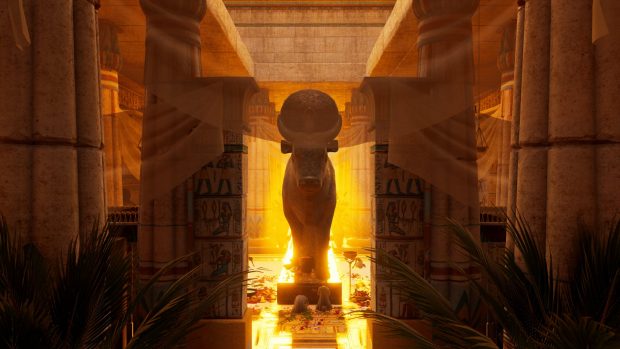 There are the occasional hints that it's a religion in decline or at risk, but in reality the ancient Egyptian religion persisted even after Egypt became part of the Roman Empire. The spread of new religions, however, in particular Christianity, and schisms and invasions within the empire wore it down. The Medjay (Bayek's organisation), on the other hand, stop being mentioned after the 20th Dynasty, which ended a millennium before the days of Cleopatra. Hipster. 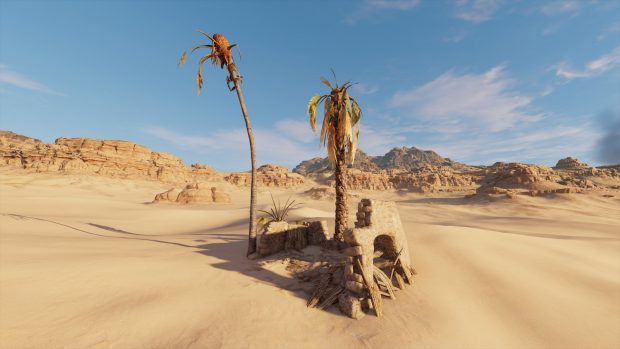 The eastern portion of the map is all verdant farmland and urban sprawl, feeding off the Nile, but head west of Memphis and civilisation starts to become more sporadic until, all of a sudden, there’s nothing left. 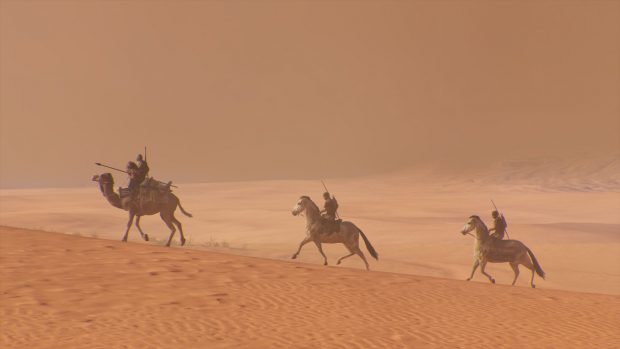 Desert takes up a huge chunk of Origins’ map, but it’s not like the wildernesses of Assassin’s Creed 3 and Black Flag’s forests and seas. It’s mostly empty. I love it. It’s not an economical use of space, sure, but when I’m tearing through the dunes on my camel, trying to outrun a furious sandstorm that’s devouring everything behind me, the last thing I need is to be is informed that there are dozens of quests and collectibles and fortresses vying for my attention. Sometimes being big and pretty and empty is fine.

I got a bit turned around while I was trying to find interesting rocks (I really cut loose on the weekend) in the South Desert because of one such storm, when out of nowhere this trio of bandits appeared in front of me. I wasn't interested in a scrap, so I sped off after taking their picture. 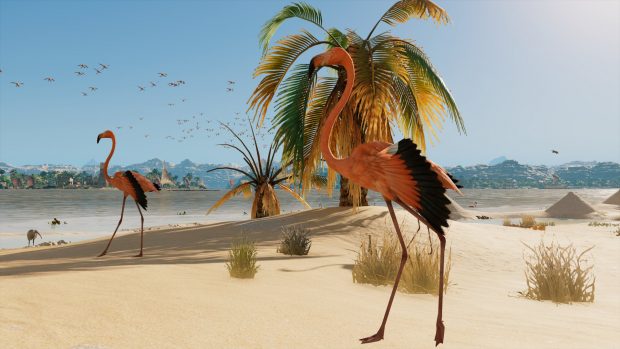 After an extended, self-imposed, sojourn in the desert, the lakes and rivers started to call and I hopped back on my four-legged pal and returned to where life is more abundant. Origins’ wildlife is worthy of the chef kiss gif, all that’s needed is some Attenborough narration.

I had to zoom in quite far to take a snap of this strutting flamingo. When they’re disturbed they tend to get spooked and quickly take to the skies like a massive pink cloud. Crocs and hippos, on the other hand, will merrily saunter right up to you and start munching on your frail human body. 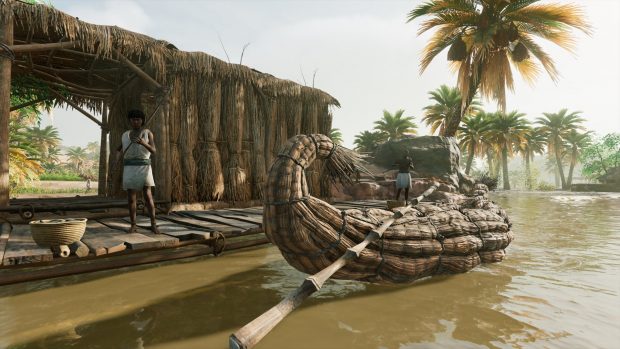 Near the flamingos I found an abandoned reed boat and took off north, towards Herakleion. On the way I passed these fisherman enjoying the placid water, seconds before an ornery reptile decided to ruin it all. 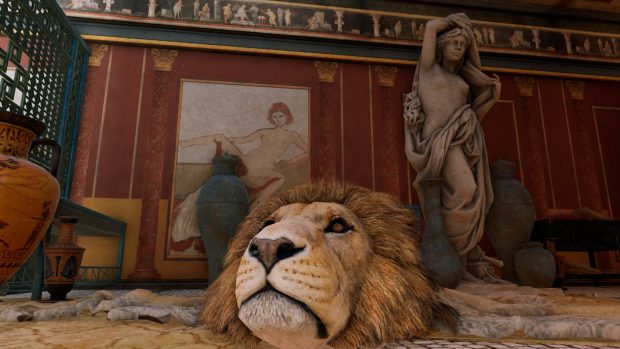 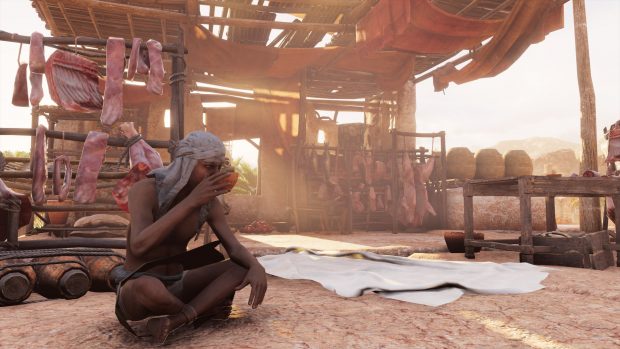 Alex Wiltshire stressed the importance of going home in Assassin's Creed Origins, so I decided to return to Siwa, which I hadn't visited in many murders. Hanging out at the local butcher's back home, I suddenly noticed what a bizarrely varied selection of cuts the shop had. I hadn’t come back for ribs though. I’d returned to see if my adventures had dulled Siwa, the town that had so impressed me 60 hours before. 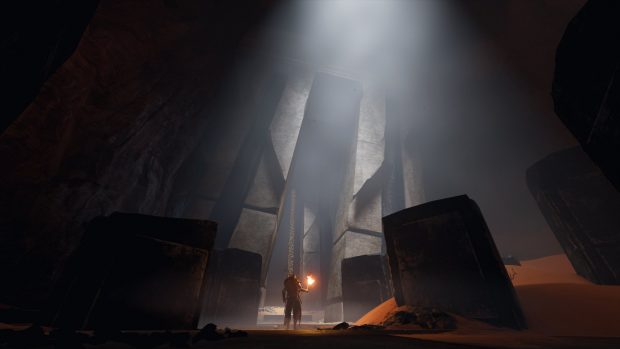 Since then, I’d delved into antediluvian tombs. 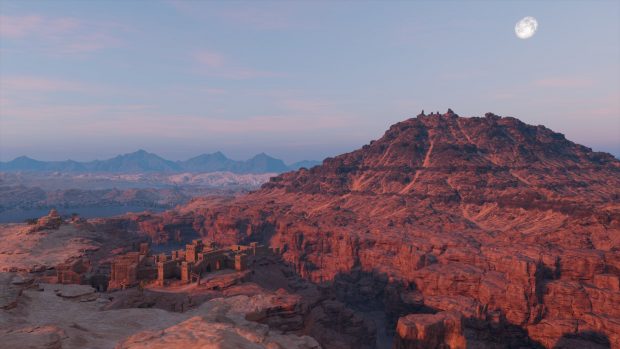 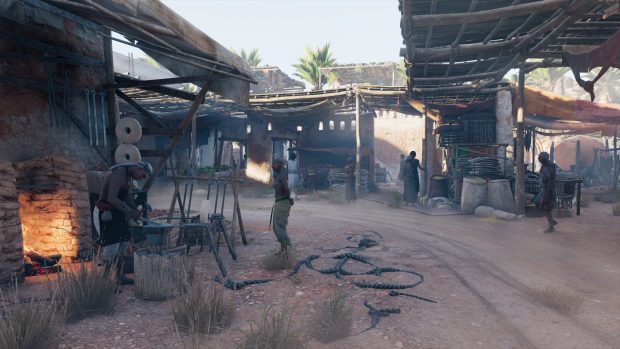 So as I sauntered through Siwa market, watching people haggling over grain or working forges, the buzz was diminished. But like the disgusting tourist that I am -- the type that might even say things like “I want to see the real Egypt” -- there’s still something comforting about walking through these exceptionally detailed but ancillary spots. Then I remembered I still had a couple of bits and bobs to do in this very first area, and more excuses to get out the camera.

With Origins getting a proper tourist mode soon, you'll be able to take guided tours of Ptolemaic Egypt, but consider doing it without the guide too. Just ramble around. Maybe you'll find an interesting rock. 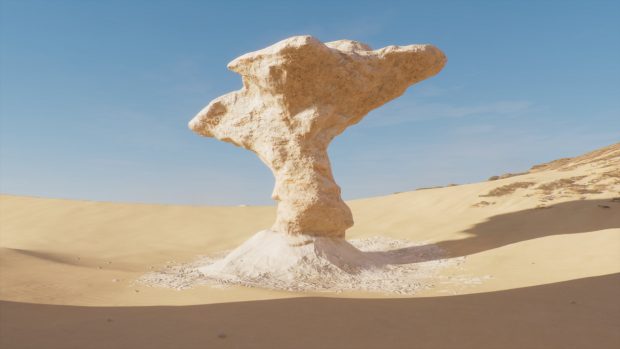