If you click on a link and make a purchase we may receive a small commission. Read our editorial policy.
Fall Guys review
A playful twist on battle royale, which is amazing before it stops surprising you.

Videogames make me squeal a lot. Most people I've lived with have commented on this fact, with varying degrees of approval. Mostly people say it's nice, because they're usually squeals of joy, and usually come immediately after a pal has just done something ridiculous in Valorant or something.

Even so, when I tell you that I spent my first half an hour or so with Fall Guys: Ultimate Knockout in a near constant vocal and visual display of delight (despite me being entirely alone and intermittently self-conscious about the people walking past my window), you should know that this is still sort of unusual.

Unfettered joy never survives repetition, but I'm reluctant to hold that against Fall Guys. Look at them. How could I?

The concept is easy as jelly bean pie. 60 wobbly bean fellas have to compete in a series of Total Wipeout/It's A Knockout style mini-games, with elimination often a Fall or two away. If you get to the end, the first bean to complete the final obstacle course and grab a big floating crown wins the match. Every level is rammed with more colours than a too-fancy crayon set, and zany in the most endearing and self-aware sense of the word. You'll Fall into either slime or clouds, but you will always Fall, and you will likely yell as you do so.

I do really want to stress how delightful this all is at first. It's utterly, unreservedly, unapologeticly playful. It seeps glee. The very first course I ran up against had me racing across tilting dominoes, teetering as fellow beans piled on from either side. I found myself frantically screaming (inaudibly, to them) at my opponents to come join me on one side, rather than bunching up and plunging us all back to the last checkpoint. 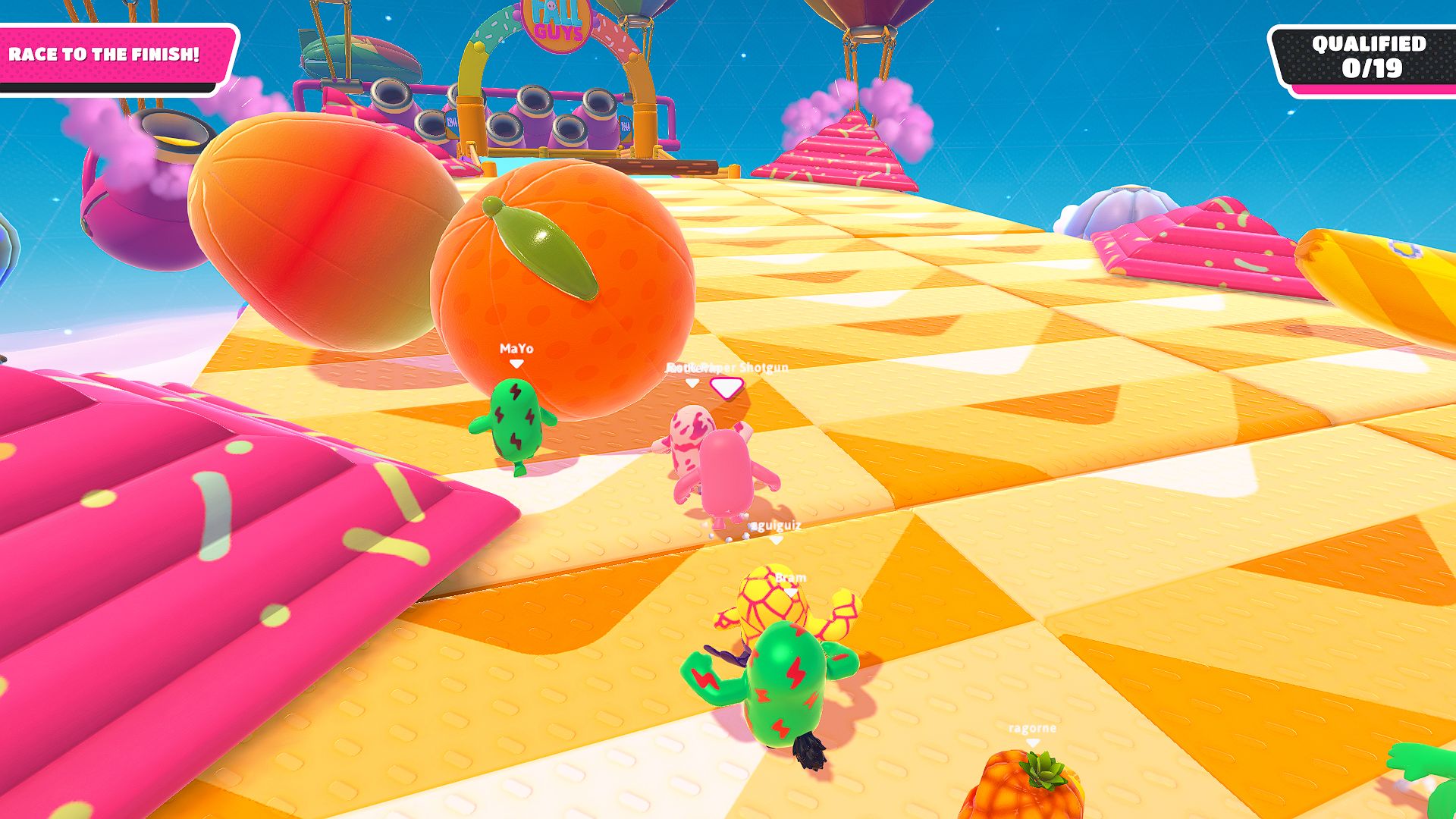 That level happens to be one of the few non-team based mini-games that blends cooperation into competition, to initially astounding effect. I wound up ahead of most of the pack, jogging alongside someone dressed as a pigeon as we jumped onto either end of each see-saw. We finished the home stretch together, each knowing we couldn't have done it alone.

My most magical moment, though, didn't even have anything to do with winning. It came in the middle of a football mini-game, where the remaining 12 or so beans get split into sides. Footballs (and other incongruities) plunged from the sky, and we all had to band together to head-butt the balls away from our goal and into our rival's. Then I organically shared a moment where I and another player wordlessly chose to plunge into the void together, and I excitedly ran off to tell the RPS treehouse about it.

That's what delighted me most - the wordless communication. I'm enamoured with the way Fall Guys can almost effortlessly push two people onto the same page, encouraging me to reach through the screen for a gloriously silly death cuddle. That's what I was getting at here, and I'm glad for the opportunity to say that without my tongue in my cheek. 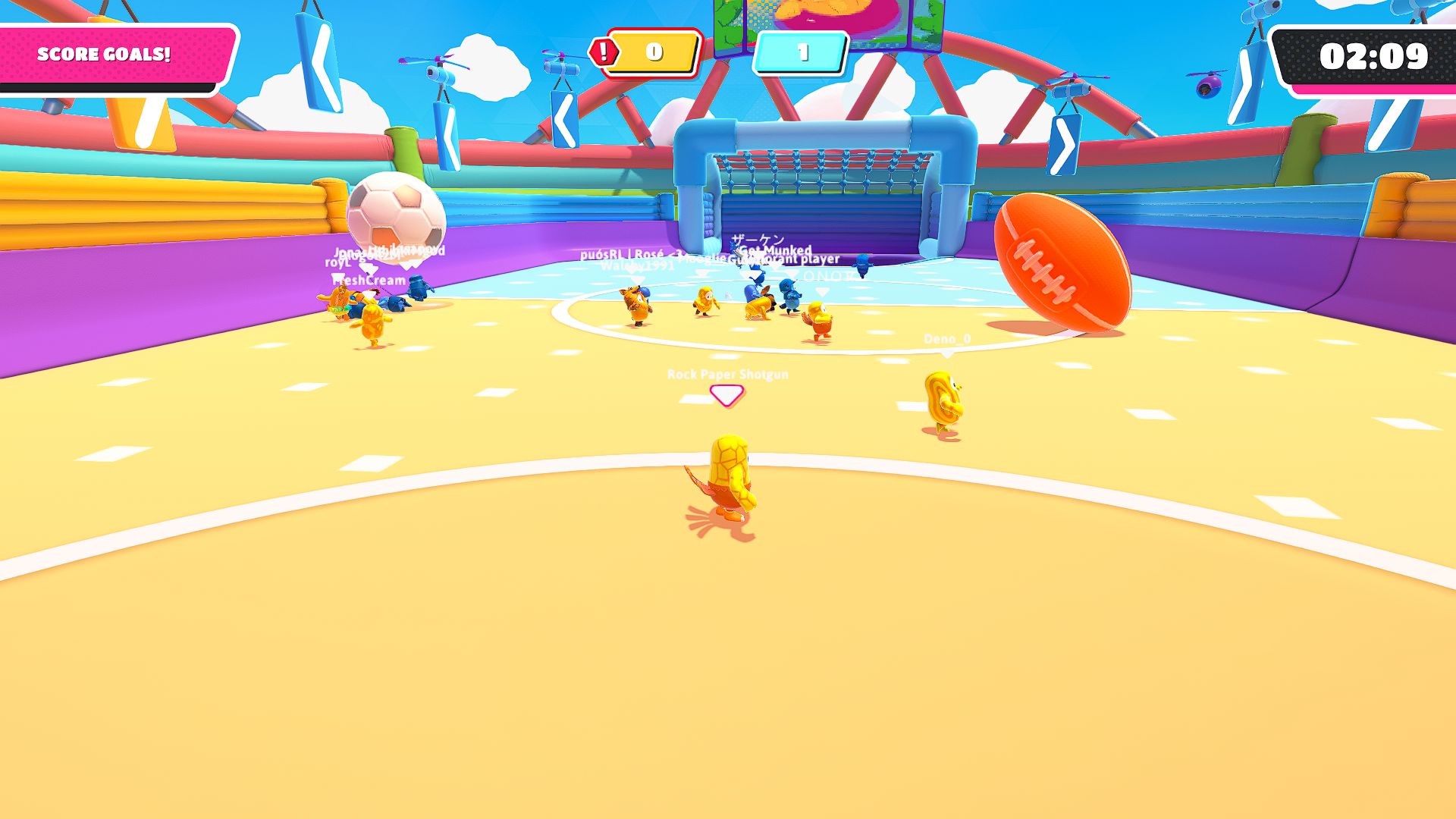 Problem is, all this wears thin fast. After a couple of hours, I'd already got to the point where seeing certain maps crop up made my poor jellified heart sink. Within a few more hours, my heart looked more like stone. Saying that feels monstrous but it's true.

It stopped surprising me. That's the core of it. When I play now I do still find myself sat there with an idle smile, but it's like flicking popcorn chicken into my mouth rather than, I don't know, devouring a wasabi cheesecake. I haven't had any moments that touch the heights of the two I've already described, and far too many obstacle courses now feel like running through the motions. I know my routes and my strats, now, and I know what to expect. There are even still one or two games that haven't come up in the rotation for me, but I'm not sure if I'll keep playing long enough to see them. 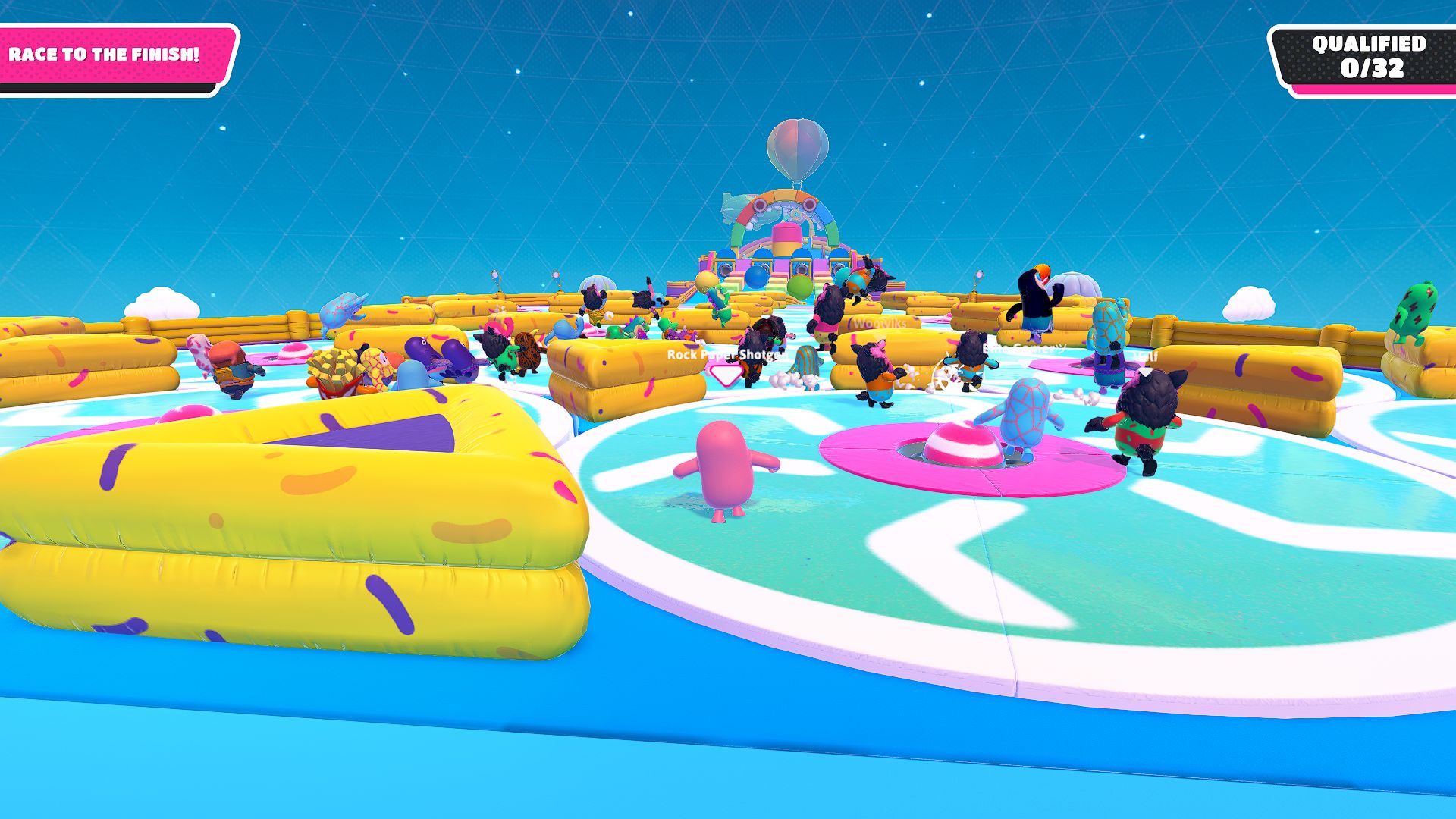 The spectacle has faded, too. The beany hordes have lost their majesty, and getting lost in the scrum frustrates me when I used to just see that as part of the fun. And if you really want to get mercenary, the chaotic floppiness of every Fall Guy doesn't exactly help jumping feel precise. But that's the whole point, and it's still ultimately a very good one, even if it is short lived.

More maps would go a long way to solving much of my bean-ui, and I think I might have given a version of Fall Guys with community map support a Bestest Best sticker in a heartbeat. I long to see what nonsense other players might confront me with, and it seems like such a logical move that I'd be surprised if I don't.

I'd still heartily recommend Fall Guys in its current form though, because those first few hours were such a treat. It's worth mentioning I've nearly always been by myself, too, so I can only cast regretful eyes at what diving in fresh with pals might have been like. G'wan, treat yourselves to an evening or two of wonder. You deserve it.