Having been supplied code for Far Cry 5 late, I haven’t yet had time to play enough to write the full Wot I Think, but since it’s out today, I thought I’d give you a whiff of its flavour so far. (tl;dr: It’s mostly pine needles and burning flesh.)

After 9 hours and 15 minutes of Far Cry 5, I’ve killed 912 enemies. That’s 1.6 kills a minute, including cutscenes and wandering plains, forests and mountains of Hope County, Montana. It even includes a spot of salmon fishing. There is a lot of killing in Far Cry 5, which is a game that does not like to leave you alone for a goddamned minute.

Thinking back to it, Far Cry Primal was also busy. I’d forgotten about all the shouting that echoed through its forests, all arboreal paradise ruined by bellowing, and all the bodies. The death count was high, but cavemen don’t drive cars and trucks and quad bikes and helicopters and aeroplanes, and they aren’t armed with rifles and handguns and rocket launchers and bows and shotguns. The point is, when you’re trying to get from A to B in Hope County, everything is always trying to kill you and has effective means of doing so, and that usually results in you having to try to kill it first. 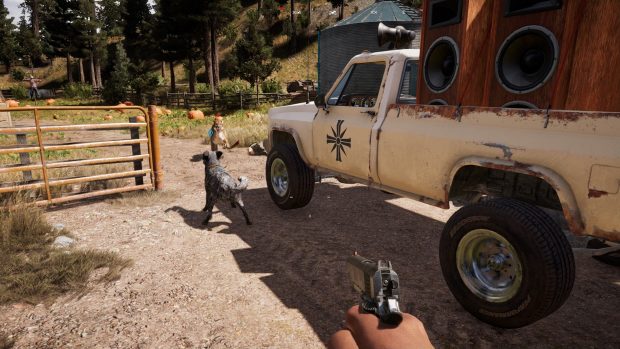 For one journey I’d accidentally got into the passenger seat of a car so my AI buddy, angry hunter Jess Black, got in to drive and automatically started heading to my waypoint. That was great, until she demonstrated the effects of entirely ignoring the constant parade of homicidal traffic that travels down every road. We didn’t get far. Not long afterwards, a plane started hunting me down, which was when it became a bad idea to drive a large and explosive target. The plane enforced a good deal of fast-travel just so I could actually get to mission locations.

But it’s also part of a system that I like, and one of the few properly new things in Far Cry 5. Each of its three regions has a Resistance Points meter, and they fill up as you piss off the region’s boss by completing missions and doing things like saving hostages and destroying high-value targets. As the bar fills, you begin attracting more and more attention. It means that as you start to pacify the map by capturing forts and other locations, you get attacked less but the challenge rises. 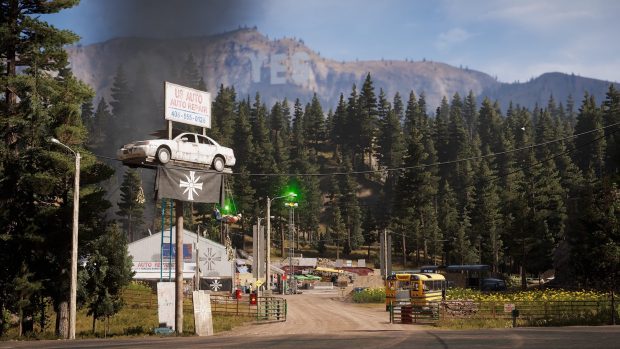 The planes, though, can be a headache. But, of course, I can deal with them. I can shoot them with my rocket launcher or, better, call in my buddy Nick Rye, who pilots a seaplane. He will fly around above me and fight off any unfriendly planes, and he’s also great for bombing and strafing targets I call for him. Watching enemies in a fort run for cover as he roars overhead is Far Cry 5 at its best, when its tangle of systems start pulling in the same big, dramatic and visible direction.

A lot of the rest of the time, playing Far Cry 5 is a scrappy and stop-start experience, mostly because of the emergent, dynamic things that happen at you: the little hostage situations which seem important at the start of the game and which you’re entirely desensitised to a couple of hours later; the van that drives past that you can capture and drive back to the region’s resistance; the cult patrols who attack you. At best they tend to distract, delay and disorient, but now I ignore or avoid them, often by fast-travelling. And that pulls me out of admiring and enjoying the beauty of the world. 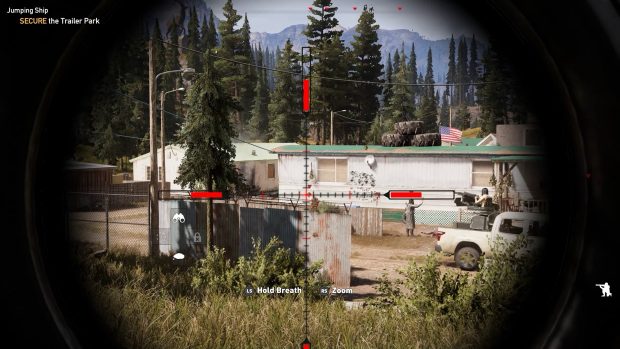 Happily, though, I attest to not experiencing any major bugs so far. It keeps disconnecting from Ubisoft’s servers, though, and it was a pain in the ass to party up with Graham to play coop. But while I’ve seen some footage of weird teleporting enemies and other weirdnesses, I haven’t experienced much beyond an NPC hovering two foot above a quad bike and a mission-critical hostage who wouldn’t be freed until I reloaded the game.

And fortunately, I’ve enjoyed pretty much every gun battle. Far Cry 5’s gunplay is the tightest yet. I never really got to grips with the feel of 3 and 4, which to me felt just a little imprecise, from aiming to hit feedback. But 5 takes the smoothness of movement from Primal and adds a slice of Clancy precision, at least once you’ve added red dot sights and relevant perks to tighten spray. Favourite gun so far? An MS16 Trooper with tactical scope and silencer, firing single shots. And the bow? The bow is the same as ever, which is exactly what I wanted, really. 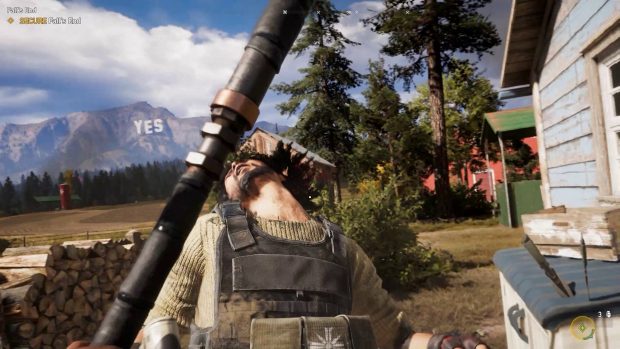 The weapons provide a toolset for combat which, nearly a 1000 enemies later, still feels good. Cult baddies immediately crumple on clean headshots, there’s a subtle ‘thwack’ sound as bullets impact distant targets that makes them feel physical. In return, they hit hard and there are billions of them, so fights feel tense, rewarding stealthy and careful play, but not so much that going extremely loud isn’t also fun.

The constant, nagging doubt, though, is that all this violence means nothing. In Far Cry 4 it was in the service of stupid fun. 3 had something to say about foreigners coming to exercise and impose violence in other countries’ conflicts. In 2, violence was nasty and dirty and desperate. Here, I have no idea, and that's despite a deeply political setting at a deeply politically sensitive time, circling issues of gun rights and libertarianism and so far positing them as vital assets for resistance against the rise of an evil cult. But 5 also wants to be fun, so everyone’s a heavily drawn archetype, there’s a nutjob Republican running for senator, and you can recruit a bear to be your buddy. There are even zombies, drugged up cultists so far gone that after you’ve downed them they get up again. 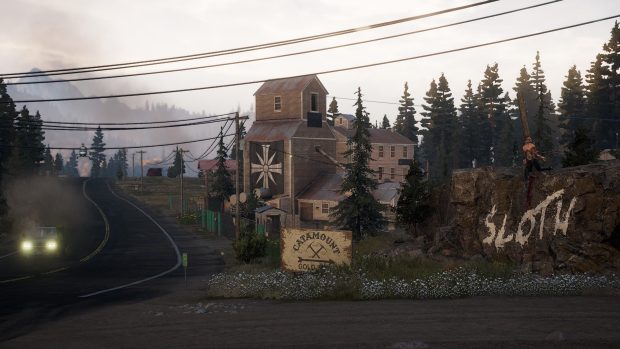 This is my main issue so far with Far Cry 5: that it seems unwilling to court controversy by saying something about its theme while using the smell of it to attract attention. It’s a game about freedom that’s set in a part of America that's at least perceived to be Trump’s heartland. That really should mean something, whatever side it goes down. Let's see what happens later in the game, but right now it seems to be doing all it can to avoid having any kind of opinion at all.